Keep in mind that fantasy strength of schedule data is a small piece of the overall puzzle and should not be considered the be-all, end-all in your fantasy decision-making process. While the difference between the best and worst schedules may look significant, it isn’t. There isn’t anywhere near as wide of a gap between the best and worst defenses in the NFL as there is at the college level. In fact, the best schedule at wide receiver this year is only 10% better than the worst schedule at wide receiver. So resist the temptation to move players up or down significantly based on their schedules. Instead, use this information to tweak your rankings and break ties between players who are very close on your draft board.

Below, you’ll find the 2020 fantasy football wide receiver strength of matchup sorted in order from the best to worst schedules. We also included the strength of matchups for the fantasy football playoffs in Weeks 14-16. The chart is color-coded with a heat map to give you a better sense of the good and bad schedules at a glance. The greener the box, the better the matchup. Likewise, a red box indicates a bad matchup.

Matchups are also ranked for each week, with No. 1 being the best matchup. Keep in mind that the bye weeks will mean the worst matchup for the week isn’t always 32. For example, in Week 9, there are four teams on bye, so the worst matchup is ranked 28 for that week. You’ll also notice that Washington is the best matchup for wide receivers based on PFF Grades. However, the Redskins are on their bye in Week 8, so the Panthers get the No. 1 matchup for the week against the Falcons.

One other very important note is that this strength of matchup schedule is subject to change as defensive personnel changes on each roster. Injuries, cuts, suspensions, and depth chart movement will all impact the strength of schedule. Most of these changes will be minor, but an injury to a standout player could have a bigger impact. 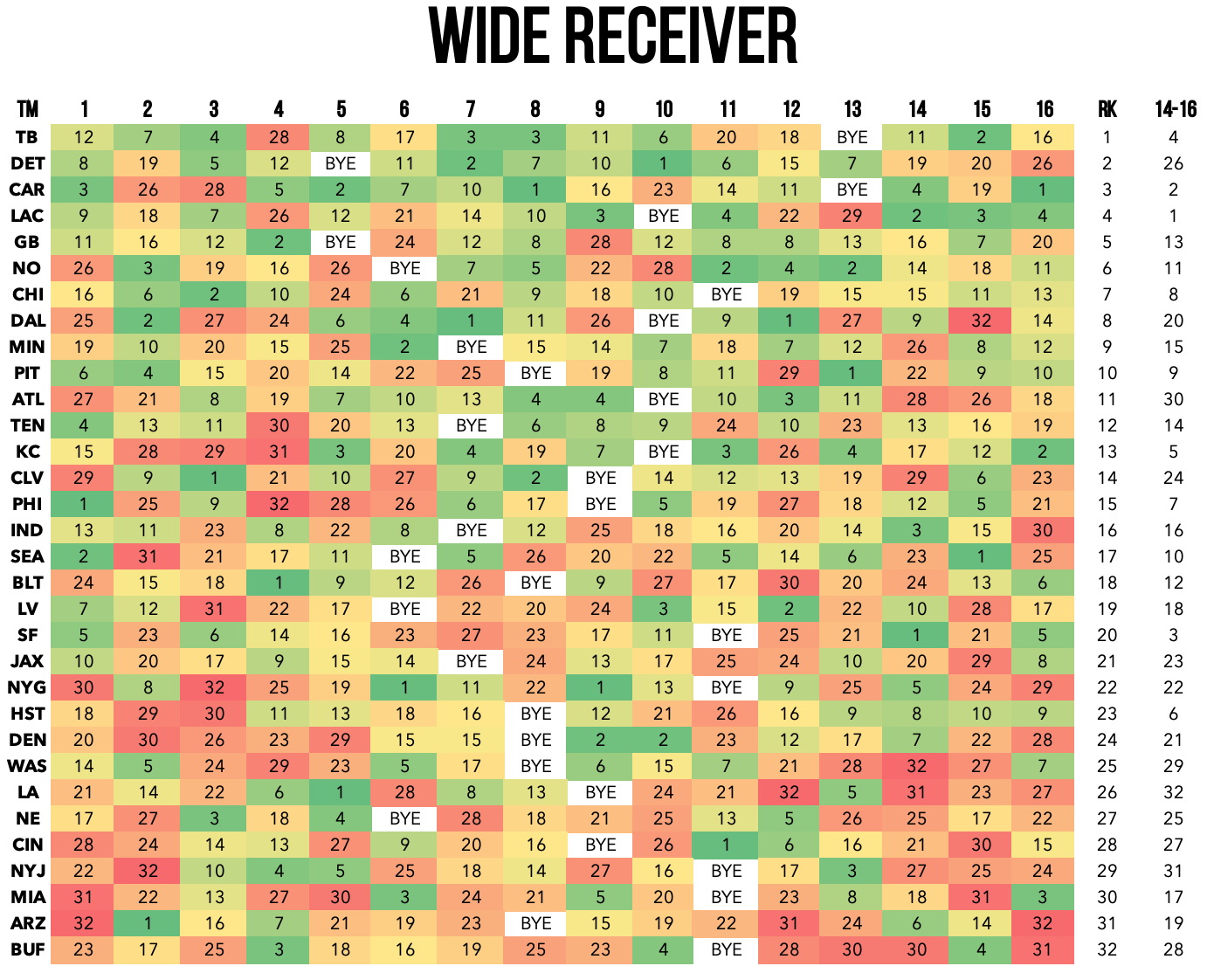 Yeah, this one just isn’t fair. The Bucs draw a whopping 12 top-10 matchups and have just one matchup outside of the top 20 (in Week 4 versus the Chargers). Getting to face NFC South coverage six times certainly helps the cause, but the Bucs also get favorable draws against the Broncos, Giants and Vikings. Godwin and Evans are positioned well to put up big numbers with Tom Brady throwing them the ball.

Like the Bucs, Detroit has 10 top-12 matchups over the first 16 weeks of the season. However, you’ll notice that none of those matchups occur during the fantasy playoffs. Over that stretch, the Lions get tough draws against the Packers, Titans and Bucs. This shouldn’t impact our view of Golladay for fantasy purposes, but we should keep this in mind with Jones. The veteran has a very high weekly fantasy ceiling, but he’s also been known to disappear from the fantasy box score.

With a very similar schedule to the Bucs, Moore is a good position to pick up right where he left off last season. Moore’s playoff stretch is especially money with matchups against the Broncos (Week 14) and Redskins (Week 16). The bigger question with Moore is how the Panthers offense will look in 2020 with Teddy Bridgewater under center and Joe Brady pulling the strings at offensive coordinator.

Arguably the best schedule on the board goes to L.A., as the Chargers have the No. 4 schedule for the season and the top fantasy schedule during the fantasy playoffs. In those contests, Allen and Williams get top-five matchups all three weeks with the Falcons, Raiders and Broncos on the schedule. But before we get too far ahead of ourselves with Allen and Williams, let’s not overlook the fact that there’s a good chance Tyrod Taylor is under center when the season starts. His presence will limit their numbers in the passing game. However, things will improve on that front once Justin Herbert takes over the job.

There’s no way around it: The Bills schedule isn’t good. Having to face the Patriots twice is obviously rough, but that’s only the beginning for Diggs and Brown. They will also see tough coverage from the Chargers, 49ers and Steelers. Those matchups come down the stretch in Weeks 12-14. While this schedule isn’t enough to drastically move either of these two players down your board, I wouldn’t recommend overvaluing either of them. And, no, Bills fans, that’s not a shot at your team.

The Jets trio has a very similar schedule to the Bills and also has to face the tough Buffalo secondary. This could prove tricky for Jets receivers, but we’re also in another predicament for fantasy purposes. Crowder figures to lead the team in targets, but he’s a very low-upside option given his role as primarily a slot receiver. Perriman flashed a high ceiling over the final five weeks of last year, but that was really the only time he produced in his four seasons as a pro. Mims is an impressive athlete, but the learning curve can be steep for a lot of rookie wideouts. Given these uncertainties, it’s tough to endorse any one of these receivers for fantasy purposes.

Having Joe Burrow under center will undoubtedly help the Bengals offense, but their schedule does Green and Boyd no favors. Cincinnati's schedule is especially tough due to a rough divisional slate against the Ravens, Browns and Steelers. We also need to address the elephant in the room with Green. He’s been one of the best fantasy wideouts over the last decade, but the veteran is also entering his age-32 season and has missed 29 games over the last four seasons. Picking Green in fantasy leagues comes with sizable risk, so be careful to not overvalue him.

Things aren’t terrible for the Rams in the beginning of the season, with three top-10 matchups over the first seven weeks. But Kupp and Woods have arguably the worst stretch run in the league with matchups against the Bucs, 49ers and Patriots. While Jared Goff has put up big yardage in each of the last two seasons, he’s shown inconsistencies in the passing game, especially when it comes to touchdowns. This should certainly be considered when you position Kupp and Woods on your draft board.