Keep in mind that fantasy strength of schedule data is a small piece of the overall puzzle and should not be considered the be-all, end-all in your fantasy decision-making process. While the difference between the best and worst schedules may look significant, it isn’t. There isn’t anywhere near as wide of a gap between the best and worst defenses in the NFL as there is at the college level. In fact, the best schedule at running back this year is only 4.0% better than the worst schedule at running back. So resist the temptation to move players up or down significantly based on their schedules. Instead, use this information to tweak your rankings and break ties between players who are very close on your draft board.

Below, you’ll find the 2020 fantasy football running back strength of matchup sorted in order from the best to worst schedules. We also included the strength of matchups for the fantasy football playoffs in Weeks 14-16. The chart is color-coded with a heat map to give you a better sense of the good and bad schedules at a glance. The greener the box, the better the matchup. Likewise, a red box indicates a bad matchup. 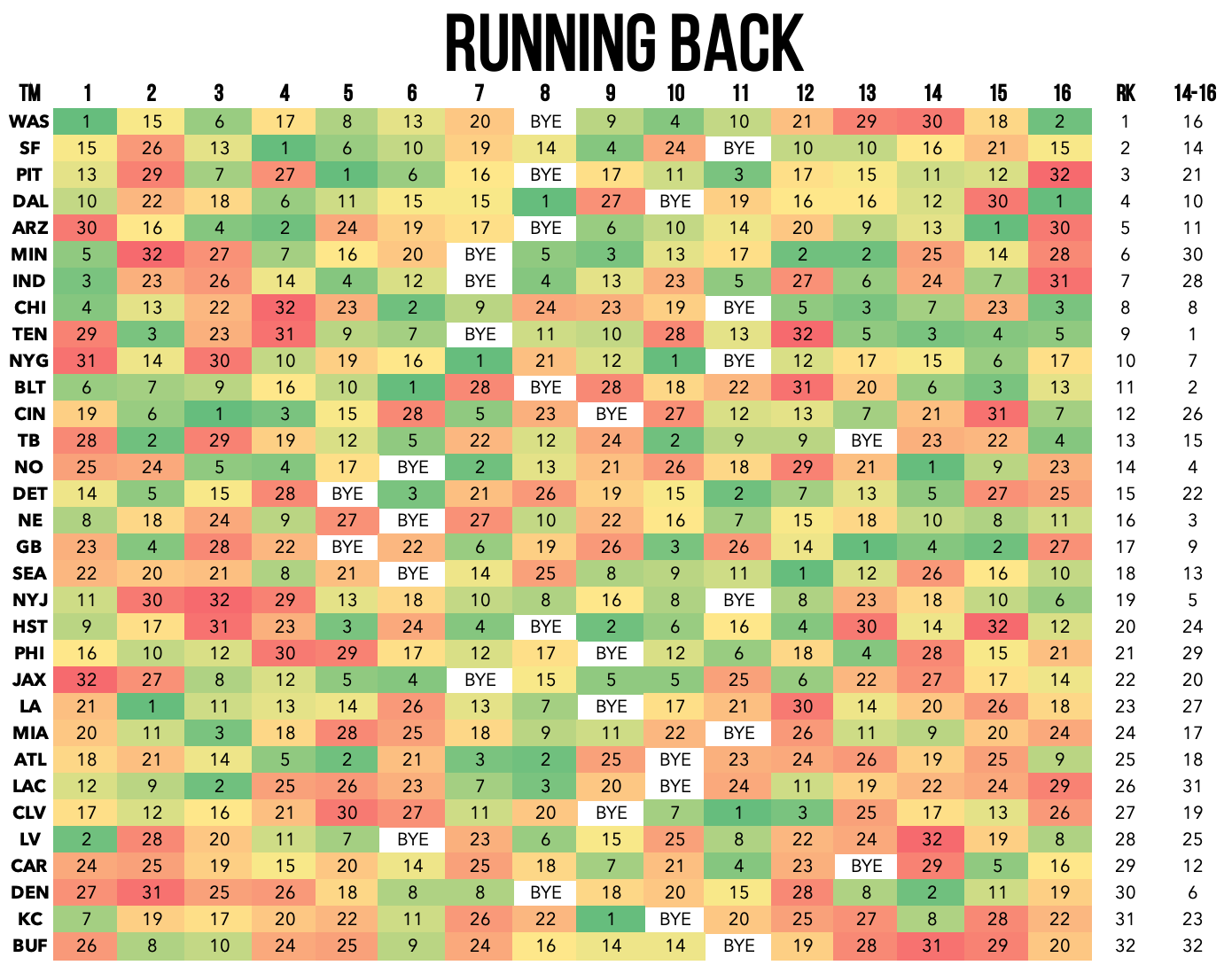 He was electric down the stretch, ranking seventh among running backs in fantasy scoring over the final six weeks of the season. Mostert also gets the second-best fantasy schedule, with six top-10 weekly matchups. He could get off to a reasonably hot start thanks to contests against the Eagles, Dolphins and Rams over the first month and a half. Of course, there’s a crowded house in the 49ers' backfield, so Mostert is far from guaranteed a featured role.

Dallas draws the fourth-best running back strength of matchup schedule, but they have the top playoff schedule out of the top five teams on the list thanks to a matchup against Philly in Week 16. Elliott’s draw isn’t as top-heavy as the 49ers, but he’ll face a number mid-pack matchups with just two outside the top 25. Of course, one of those comes in Week 15 with the stout 49ers defense on the schedule for the fantasy football semifinal round.

Like Mostert, Drake caught fire during the fantasy stretch run and was an unlikely league-winner for many teams. Drake is in a position to capitalize once again for fantasy purposes thanks to six top-10 weekly matchups. He will have to face San Francisco in Weeks 1 and 16, but also gets Philly in Week 15. Drake is still operating with a limited fantasy resume, but he’s in a favorable position to produce RB1 numbers this season.

Sure, he was a big disappointment last season, but there are some things working in Montgomery’s favor heading into 2020. The Bears didn’t address running back in the offseason, meaning Montgomery is essentially locked in place as the lead back. He also gets a plus schedule, with the No. 8 strength of matchup for both the entire season and the fantasy playoffs. While I wouldn’t get behind Montgomery as anything more than a back-end RB2, he’s still an intriguing player to target at his current ADP in the seventh round.

Not only do we have to deal with a potential committee in the Bills backfield, but this duo also gets the worst draw for both the entire season and for the fantasy playoffs. It’s going to be tough sledding with two matchups against both the Patriots and Jets. Buffalo also has an absolutely brutal stretch run with consecutive matchups against the 49ers, Steelers, Broncos and Patriots.

Something tells me there’s going to be a lot of frustrated Gordon owners when we reach mid-October. Gordon’s draw out of the gate is downright terrible with the Titans, Steelers, Bucs, Jets and Patriots to open the season. If there’s any silver lining for Gordon, it’s his playoff schedule. He gets the No. 6 draw from Weeks 14-16 with big-time matchup upgrades in the first two weeks against the Panthers and Bills.

The Raiders have the ultimate hit-or-miss schedule when it comes to running back matchups this season with five matchups in the top 10 and five in the bottom 10. While I’m confident in Jacobs continuing where he left off last season, his schedule could lead to a bit of a fantasy roller coaster ride throughout the season. Keep that in mind because it’s very easy to forget the big picture when we’re in the thick of things during the season.

Melvin Gordon is out of the way, but Ekeler doesn’t get a favorable draw from the schedule-makers, with seven bottom-10 matchups and the No. 31 schedule during the fantasy playoffs. Having the face the Broncos twice is just the tip of the iceberg for Ekeler. He’ll also square off against the Bucs, Saints, Patriots and twice against the Raiders.

The good news is that Gurley won’t have much competition for touches in Atlanta. The bad news is he faces an uphill battle from a matchup standpoint with the No. 25 schedule for running backs. Gurley has to face a tough Bucs run defense twice, but fortunately one of those matchups falls in Week 17. Still, he has just one favorable matchup over the final eight weeks of the fantasy season. Gurley could fade hard down the stretch.