Pro Football Focus' Preview Team has come together to provide every fan with the right information to best prepare and enjoy Week 17 in the NFL. We offer advanced stats on key NFL matchups and a Greenline perspective for all the games of the final week of the regular season. 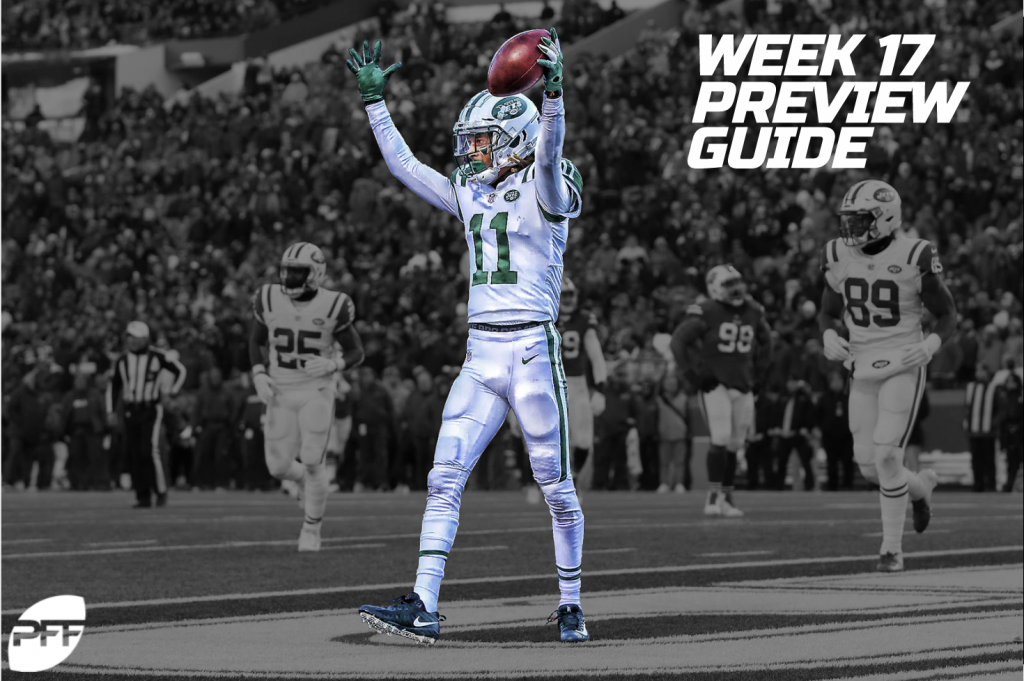 Texans' DeAndre Hopkins has the best hands in the game. That's not really up for debate. He also leads all wideouts in first-down receptions on passes of 10-plus air yards with 49 through Week 16. Jalen Ramsey will have his hands full on Sunday.

Greenline/Predictive Analysis:  After opening with Houston (-9), this line has dropped significantly, crossing a key number (-7) and currently sitting at (-6.5). Giving the Texans over a 70% chance at winning, Greenline has very little value on either team but does like the over, especially if the total can be found at 40.

Former Alabama product Robert Foster is making a name for himself down the stretch of this season, as he's earned 82.0-plus overall grades in three of his last six games. Dolphins' Torry McTyer hasn't had the season Foster has had in the slightest and will be in for a long day if he can't get him under wraps early.

Greenline/Predictive Analysis:  The hook was added to the opening (-3) line pushing Buffalo to -3.5 and providing value on Miami. Greenline currently has both Miami at (+3.5) and the moneyline of +170 as plays available, with the model giving Miami a 44% chance of winning outright on Sunday.

Robby Anderson has had some success in recent weeks, but he hasn't had it going against the likes of Stephon Gilmore. The Pats' 28-year-old South Carolina product is having a career year in 2018 and has locked down nearly every receiver he's gone up against this season. Anderson's improving skillset will be put to the test on Sunday.

Greenline/Predictive Analysis:  Needing a win to secure a first-round bye, the Patriots currently sit at -13.5 favorites over the Jets. That many points are tough to lay, even on the Patriots, and Greenline falls right in line with the market and the only bet offering any sort of value is the over at 44.5.

Two polarizing rookies will square off in Week 17, as Giants running back Saquon Barkley will look to beat Cowboys' Leighton Vander Esch on the ground and through the air on Sunday. Vander Esch has played well above expectation in coverage all season, but Barkley can be a problem for the best off-ball linebackers and will require LVE's best effort to keep from running wild.

Greenline/Predictive Analysis:  With one team having nothing to play for and one team that always plays well for pride, the market likes Eli Manning's Giants (-6) to handle the backup Cowboys. Greenline disagrees, but at times — especially in gambling — discretion is the better part of valor.

Bucs slot receiver Adam Humphries plays his last game on an expiring contract on Sunday, and he'll have a favorable matchup going against Falcons' Brian Poole in Week 17. Humphries has played well in bursts throughout 2018 en route to a career-high overall grade (75.2).

Greenline/Predictive Analysis:  This line was and still is all over the place. Allegedly opening in spots showing Atlanta (-2), this line has swung hard towards the Bucs with the Falcons now (+1.5). Greenline loves the Falcons once again, giving almost a 60% win probability to Atlanta.

Davante Adams has risen to the occasion as the Packers' top wide receiver in 2018. He's been one of the most consistent, high-performing wideouts in the NFL this year, a testament to his ability to produce even when pitted against the league's best cornerbacks. Lions cornerback Darius Slay has had bad games this year, but he's no one to take lightly and will give Adams fits if underestimated.

Greenline/Predictive Analysis:  Ranging from +7.5 to +10, Greenline sees significant value in Detroit projecting the road dog to cover over a touchdown. Shading the total towards the over (weather permitting) an intriguing opportunity exists with Detroit's over team total.

Neither team has anything to play for in Week 17, so we might not see a ton of the two players listed above. Either way, Christian McCaffrey and Demario Davis have been outstanding in 2018 and will be a matchup to watch for as long as the two are on the field together.

Greenline/Predictive Analysis:  Locked into the #1 seed, the Saints could provide an extended break for any number of players, especially Drew Brees. With Carolina onto their third-string quarterback, few if any could anticipate how this game will play out.

No one Oakland defender will be tasked with keeping Travis Kelce from single-handedly ruining their regular season finale. It'll take an army. Kelce beat the Raiders' defense for 168 yards and two touchdowns in Week 13, and nothing says he won't do it again on Sunday.

Greenline/Predictive Analysis:  The Chiefs have to win to secure home field advantage, and against the Raiders, they project to do so almost 90% of the time. No real value exists between Greenline and consensus markets.

Throughout his career, William Jackson has allowed a passer rating of just 39.6 when covering Brown.

Greenline/Predictive Analysis:  Needing a win and some help to sneak into the playoffs, the Steelers (-14.5) have everything to play for on Sunday. The Bengals are wrapping up an injury-plagued season, yet Greenline sees a bit of value on them crossing the two touchdown threshold.

Garrett has won 21.1% of his pass-rushing snaps over the last month, which is the fourth-best rate among edge defenders in that span.

Greenline/Predictive Analysis:  Hopefully the rematch of this game in 2019 is for the AFC North crown, but alas, the schedule makers did a disservice by not pitting the Steelers vs Ravens in week 17 one last time. Needing to beat the upstart Browns to get into the playoffs, the Ravens have held strong as -6 point favorites with no real Greenline value.

Anchored by the play of their guards, the Browns' offensive line is giving Baker Mayfield the chance to succeed

Since stepping into the starting role in Week 15, Foles has posted a passer rating of 103.0 on targets of 20 or more yards downfield, while Norman has allowed two touchdowns and 126 receiving yards on passes of 20-plus yards.

Greenline/Predictive Analysis:  A win and a prayer for the defending Super Bowl champions to break into the playoff party as they bounce between -6.5 and a touchdown favorite. Greenline gives a 77% win probability, but no real value exists on the spread or total.

Greenline/Predictive Analysis:  Win and in for the Vikings (-4.5). With wavering motivation from the Bears, the line has held steady. Greenline likes the Bears to play straight up and cover as road dogs.

Carson has forced a league-high 45 missed tackles on his rushing attempts this year, while Reddick has missed nine, which is tied for the sixth-most among linebackers.

Greenline/Predictive Analysis:  The Seahawks are playing for playoff matchup possibility as (-13.5) favorites. Greenline offers little value away from the market other than a possible play on Cardinals over 10.5 team total.

Greenline/Predictive Analysis:  Sean McVay's Rams (-10) are motivated by a possible first-round bye against their division rival 49ers. With a win probability of 82%, Greenline is once again in line with betting markets outside of a lean-to potential points being scored.

Greenline/Predictive Analysis:  With around a 13.5% chance of sliding into the number one seed in the AFC and otherwise holding steady as the fifth seed, the Chargers (-6.5) say they are motivated but that could remain fluid throughout the game. Greenline finds a little value in the Chargers moneyline but an avoidance of this game feels appropriate.

Hilton has accumulated 268 receiving yards from deep passes over the last four weeks, the most among receivers in that span, while Butler has surrendered a passer rating of 82.4 on his deep targets this year.

Greenline/Predictive Analysis:  The game to close out the regular season, win or go home with the Colts (-3.5) road favorites. Greenline drops the hook but finds little value in the consensus lines. If leaning towards the home dog, a possible play exists on the Titans (+3) first half line.