According to PFF sack totals, which only award full sacks and no half sacks, Bradley Chubb is currently tied for eighth among all NFL defenders with 13 sacks. His 56 total pressures are 18 more than any other rookie defender and are tied for 22nd among all defenders in the league. There is still an outside chance that Chubb can claim the title of most pressures in a rookie season since PFF began charting them in 2006, a mark that is currently held by Aldon Smith, who racked up 64 pressures back in 2011. Looking at that production, the Denver Broncos could not have hoped for much more out of their first-round pass rusher. 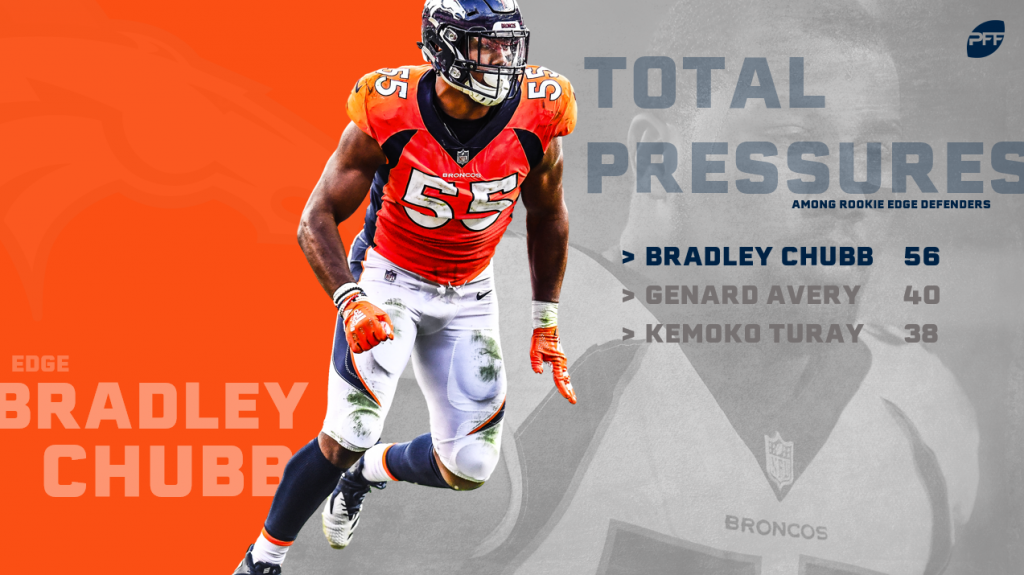 Not only is Chubb getting sacks at a very high rate, especially for a rookie, but he is supporting that with a solid pressure rate which is a more stable metric. However, when you look at Chubb’s overall PFF grade of 68.1, that high-level pass-rush production isn’t translating, as he ranks just 50th out of 107 qualifiers at the edge defender position. The reason behind that is at the foundation of what Pro Football Focus has aimed to convey through its player grading – not every stat is earned equally, and stats alone do not tell the whole story.

To that point, six of Chubb’s 13 sacks have come on plays on which the sack was considered either a “clean-up” sack or a sack where Chubb was unblocked and had a free run at the quarterback. Their game in San Francisco two weeks ago highlights that well. He had two sacks in the game, but one came when he came through unblocked on a stunt and the other came on a play on which Nick Mullens unnecessarily drifted right into Chubb off the mesh point and gave him a rather easy sack opportunity without forcing Chubb to beat his blocker.

On plays like that, Chubb is given credit for finishing the sack in his grade, but a play on which he quickly beats his blocker one-on-one and flushes the quarterback from the pocket without the sack would earn a higher grade. The inclination to use sacks as a barometer for the success of a pass rusher is natural given the lack of other readily available metrics to quantify their success, but as PFF Data Scientist Eric Eager pointed out back in February, sacks aren’t a very stable metric.

The average percentage of pressures that have come as sacks since 2014 is 14.7%. If you apply that to Chubb’s pressure total, he would have eight sacks rather than the 13 he currently boasts. That is no sack total to scoff at, but it’s also significantly short of his current mark. Looking at recent history, his sack rate seems likely to regress back towards the mean next season from where it is currently at 23.2% (fourth-highest among edge defenders with 35 or more pressures).

Here are the NFL leaders in percentage of pressures coming as sacks over the last four seasons for players with 35 or more pressures: 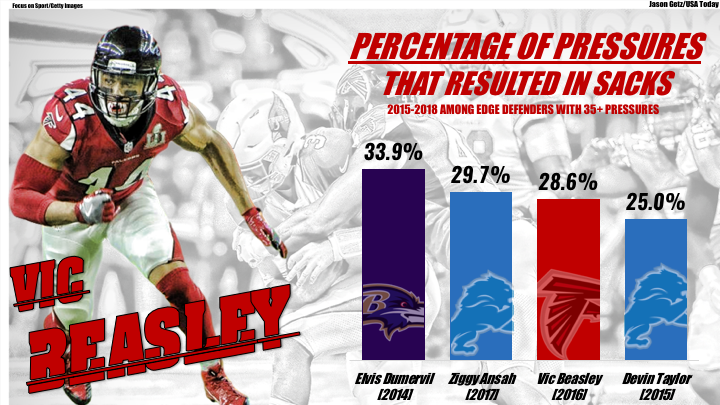 None of those players recorded a sack rate of 20.0% or higher on 35 or more pressures the following year. In other words, their sack luck went away. Chubb could certainly take a leap forward as a pass rusher and put together another 13-sack season next year, but it’s not likely unless he also increases his pressure count.

That being said, it’s not Chubb’s pass rushing that is hurting his overall grade. Though he isn’t a top-ten pass rusher as the sack total would suggest, Chubb’s pass-rushing grade of 73.0 ranks 22nd at his position. Instead, it has been the other facets of his game – run defense, coverage, and tackling – that have brought down his overall grade.

Chubb currently has sub-40.0 grades in both coverage (where his 71 snaps rank 14th among all edge defenders), and in tackling, where Chubb has missed 11 tackles on his 54 tackle opportunities. Both of those grades are the worst on the Broncos’ defense, and both put a dent in his overall grade on the season. They’re not the premier, big-ticket skillsets one generally looks for in an edge defender, but coverage and tackling ability are two areas in which Chubb has hurt the Broncos.

The more surprising area where Chubb has just been mediocre has been as a run defender. Coming out of NC State, Chubb had a track record of very strong play against the run, especially after he earned the highest run-defense grade in the class. This season, his run-defense grade of 68.9 sits at 45th for the position.

Chubb’s lack of a dominant presence in the run game, along with legitimate struggles in coverage and as a tackler take away a bit from what has been an impressive debut as a pass rusher. He may not quite be playing at the level that his sack total would indicate, but Chubb has proven the ability to consistently get after the quarterback at the NFL level. Another step forward as a pass rusher along with a step back towards the run game dominance that he displayed in college could lead to a player whose performance matches up with his draft position, but on a play-by-play level, Chubb hasn’t lived up to that billing in Year One.

Sacks are important, and Chubb’s ability to convert sacks has certainly helped the Broncos’ defense. Sacks are also volatile from year-to-year, and they don’t tell the whole story of Bradley Chubb’s rookie season.