Lamar Jackson is (rightfully) drawing all the flashing lights and owning the headlines in Baltimore, as the Ravens look to cap off the rookie’s seven starts under center with a 6-1 record and a playoff berth to boot with a win in Week 17. What can’t get lost in Jackson’s rise to fame, however, is the team’s high-performing defense.

No NFL defense has allowed fewer yards or points per game than Baltimore’s in 2018, and the unit’s successes are rooted in the team’s younger players playing well beyond expectations. 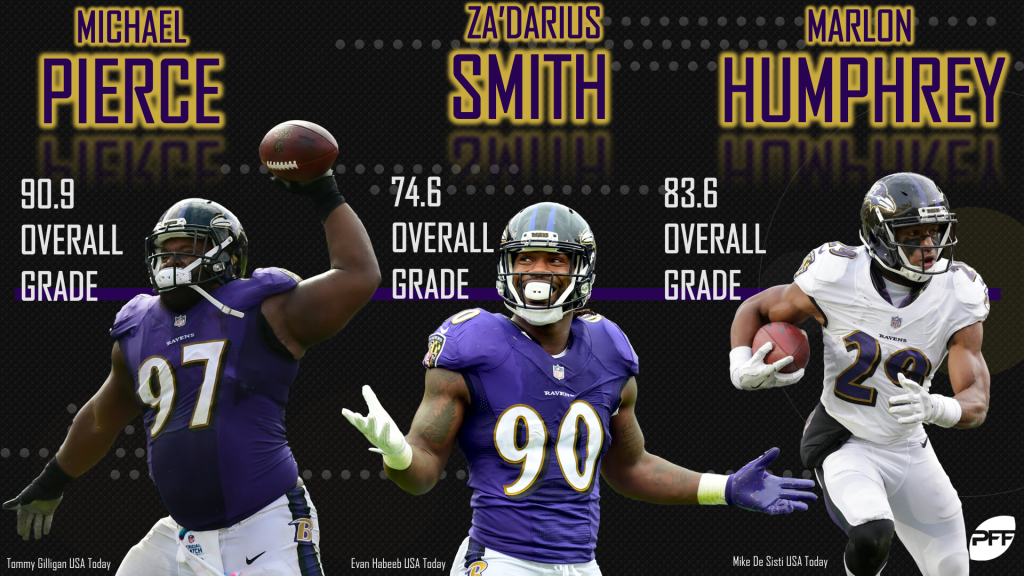 Michael Pierce, a former undrafted free agent out of Samford, is currently the team’s highest-graded defender (90.9) amidst a career year. The 6-foot, 340-pounder anchors the Ravens’ defense as the team’s bully in the trenches and marquee run defender. Pierce earned 79.0-plus run-defense grades in each of his first two seasons in the NFL and now owns an impressive 91.7 run-defense grade that ranks fourth at his position through Week 16.

Brought in as a fourth-round pick in 2015, Smith was slow out of the gate, earning sub-61.0 overall grades in each of his first three years in the league. His 2018 campaign has been different, however. He now leads the team in total pressures (59) and ranks fifth and 13th in pressure percentage (15.0) and pass-rush win rate (16.8) among all NFL edge defenders with 250-plus pass-rush snaps on the year.

Judon and Smith are former Day 3 picks, while Pierce didn’t even hear his name called in the draft. All three are putting together career-high performances in several respects, and the trio’s 2018 salaries combined barely account for half of the $8.25 million veteran safety Eric Weddle is due this season.

And the Ravens’ laundry list of defensive difference-makers on rookie deals doesn’t stop there.

Second-year cornerback Marlon Humphrey has taken a considerable step forward in 2018, as he currently ranks fifth in overall grade (86.3) among all cornerbacks with at least 300 defensive snaps on the year. He also ranks third in forced incompletion percentage (23.6) and sixth in passer rating allowed (68.1) among qualifiers.

Other Baltimore youngsters (i.e., C.J. Mosely, Chris Wormley, Tim Williams, Tavon Young) have also contributed positively in bursts throughout the season, but it’s been the play of the four above combined with several key veteran contributors that have the Ravens’ defense flying high.

Suggs and Weddle are old-timers compared to the core of the defense, but their age isn’t keeping them from playing at a high level, yet. Weddle ranks 12th among all safeties in overall grade (78.9) and 11th in run-defense grade (78.0) through Week 16, while Suggs’ pass-rush ability remains top-notch. At 36 years young, Suggs ranks 16th in pressure percentage (13.3) with 51 total pressures across his 383 pass-rush snaps.

Turning 30 in February, six-year veteran defensive tackle Brandon Williams is another oldie but goodie leading the Ravens’ flock of young bucks by example. Working as Pierce’s partner in crime from the interior, Williams owns the fourth-highest grade (78.9) on the defense and ranks 23rd among all interior defensive linemen in run-defense grade (81.2).

The Ravens’ strong veteran presence coupled with a bevy of young guns delivering on rookie contracts has the team firing on all cylinders as they make a push for the playoffs in 2018. And even if they fall short in Week 17, Baltimore can bet on a bright future if the front office can maintain its nucleus of young talent on the defensive side of the ball.