Evaluating the most important, most valuable position in football isn’t easy. Quarterbacks can’t be defined by any one number, not a box-score stat or advanced statistic. As such, quantifiably measuring the success of the NFL’s signal-callers requires multiple numbers, PFF’s grading system and advanced stats – both included and not included in Premium Stats 2.0.

Outside of Premium Stats 2.0, PFF’s team of analysts, including former NFL signal-caller Bruce Gradkowski, chart ball location for quarterbacks to better evaluate quarterback accuracy across the NFL and FBS. PFF also makes a note of what we call big-time throws and turnover-worthy plays, the former being any attempt that receives a raw grade of +1.0 or higher in our system and the latter representing any dropback that receives a raw grade of -1.0 or lower – this includes dropped interceptions.

PFF’s quarterback charting continues to grow, as well. Our analysts have now started to chart quarterback decision (i.e., first read, checkdown), targeted route, incompletion type (i.e., dropped pass, pass breakup) and much more as we continue to develop our skills, add to our staff and learn more about the stable, valuable elements of quarterback play.

On the opposite end of the list are Kyle Allen, Mason Rudolph and Josh Allen. The three signal-callers all finished with adjusted completion percentages below 31% on deep passes in 2019.

Tennessee Titans quarterback Ryan Tannehill finished his stellar 2019 campaign as the NFL’s leader in clean-pocket passer rating at 122.8. He completed 166-of-224 attempts (74.1%) for 2,209 yards, 17 touchdowns and just four picks when kept clean this past season. Brees and Stafford finished right behind Tannehill at 120.7 and 120.0, respectively. 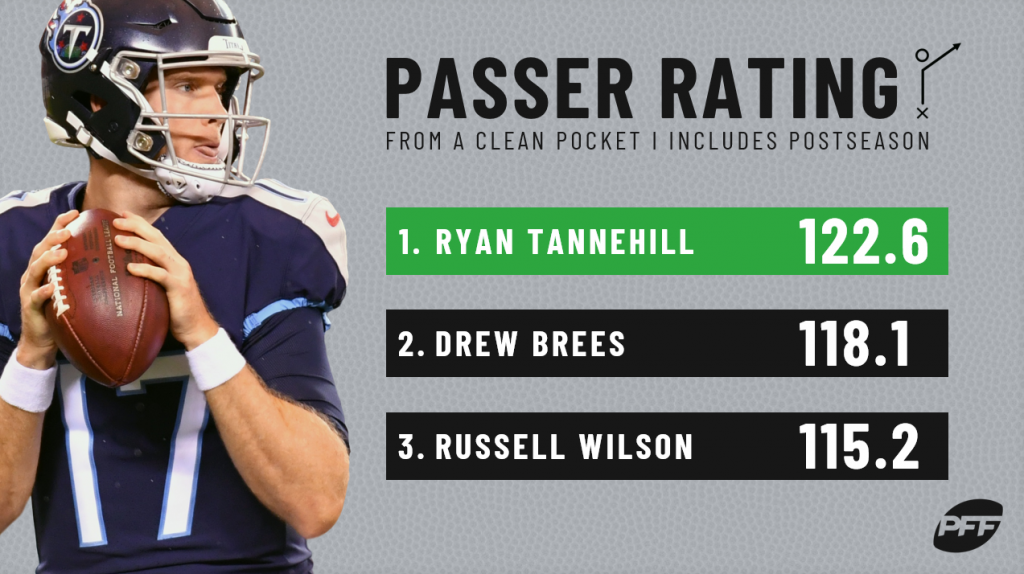 No quarterback with at least 200 clean dropbacks in 2019 recorded a lower clean-pocket passer rating than Washington Redskins rookie signal-caller Dwayne Haskins at 81.8. He completed just 63.2% of his attempts for 1,089 yards, five touchdowns and five picks when kept clean a year ago. Haskins, Andy Dalton, Mayfield and Kyle Allen were the only four quarterbacks with sub-90.0 clean-pocket passer ratings in 2019.

The two bottom-ranked quarterbacks in passer rating under pressure were Rudolph and Tampa Bay Buccaneers’ Jameis Winston at 35.6 and 44.5, respectively. New England Patriots veteran Tom Brady also recorded a surprisingly low passer rating when pressured (51.8) that ranked as the third-worst mark among qualifiers in 2019.

PFF also charts time to throw one every passing play in the NFL. In addition to ranking the quarterbacks by average time to throw in Premium Stats 2.0, PFF splits passing performance by throws made within 2.5 seconds of the snap and throws made 2.6. seconds or longer after the snap. Dalton and Brees finished the 2019 season tied for the lowest average time to throw among qualifiers at 2.39 seconds. Kirk Cousins’ 2.83-second time-to-throw average was the longest of any NFL quarterback with 300 or more dropbacks in 2019.

Brees’ 114.8 passer rating on throws made within 2.5 seconds of the snap led all qualifying signal-callers this past season. He completed 177-of-220 attempts for 15 touchdowns and two interceptions on said throws. Winston’s 78.4 passer rating on such throws was the lowest in the NFL in 2019.