NFL scores and recaps for every Week 15 game

PFF broke down the numbers immediately after every NFL Week 15 game, including scores, rookie standouts, offensive line performances and more.

Offensive spotlight: George Kittle had a career game against the Seahawks, which is saying a lot for a likely future Hall of Famer. The sixth-year tight end currently has a 93.2 grade on first review, which would be one of the highest of his career. If it holds, then Kittle’s three highest-graded games of his career will amazingly come against the Seahawks in Seattle.

Kittle caught four of his five targets for 93 yards and two touchdowns, with a perfect 158.3 passer rating when targeted.

Defensive spotlight: Nick Bosa showed why he’s one of the leading candidates for the NFL's Defensive Player of the Year on Thursday. The fourth-year edge defender finished with a sack, five pressures and a 33.3% pass-rush win rate on 39 pass-rushing snaps.

Offensive spotlight: Vikings receivers K.J. Osborn and Justin Jefferson helped fuel the team's second-half comeback, as both were able to eclipse 120 receiving yards in addition to hauling in a touchdown from double-digit targets on Saturday. Each receiver forced a missed tackle in addition to accumulating three explosive (15-plus yards) receptions in the process.

Defensive spotlight: Colts interior defender DeForest Buckner put together, arguably, his best performance of the season against Minnesota, especially as a pass-rusher. The former Oregon Duck finished with a sack and seven total pressures en route to a 75.0-plus pass-rushing grade on first review. Buckner's impact was limited to the passing game, either, as he also notched a tackle for loss against the run.

Offensive spotlight: Even in a victory, Browns quarterback Deshaun Watson wasn't very impressive, finishing 18-of-28 for 161 yards and a touchdown en route to a sub-65.0 passing grade on first review. Watson really struggled to push the ball downfield, as he registered an unimpressive 4.5-yard average depth of target. Still, Watson added 22 rushing yards from six carries while avoiding turnover-worthy plays, which enabled the offense to do enough to pick up the victory.

Offensive spotlight: Tyreek Hill has been the star receiver all season for the Dolphins, but Saturday night, Jaylen Waddle filled that role. The second-year speedster from Alabama caught three of his six targets for 114 yards and a touchdown, with a 135.4 passer rating when targeted.

Defensive spotlight: As one can imagine, it’s not easy covering the speed that the Dolphins have at wide receiver. Bills star corner Tre’Davious White did a terrific job regardless. The sixth-year corner only allowed three catches on eight targets and forced two incompletions as well.

Offensive spotlight: Bears QB Justin Fields remains one of the most electrifying playmakers in the league. He passed for only 152 yards (and two scores) but added 95 rushing yards, 69 of which came after contact.

Defensive spotlight: Haason Reddick was a nightmare for the Chicago offense all game long. He notched two sacks and a pressure rate of 33.3% overall, making a constant nuisance of himself as a pass-rusher.

Offensive spotlight: Despite combing for 569 passing yards in the game, it was a pretty poor day for quarterback play. Zach Wilson completed just 12 passes for 268 yards on passes thrown beyond the sticks and recorded just two big-time throws and two turnover-worthy plays in the game. For the Lions, 170 of their 252 passing yards came after the catch, and Jared Goff managed just one big-time throw in the game on first review.

Defensive spotlight: If you didn’t see much of Sauce Gardner in the game, that’s because the Lions simply avoided throwing at him. From 38 snaps in coverage, he was targeted just once, resulting in a seven-yard reception. The likely Defensive Rookie of the Year when all is said and done, Gardner is already reaching the level of reputation where offenses avoid him where possible.

Offensive spotlight: Diontae Johnson may have opined for Mason Rudolph earlier this week, but he had quite the rapport with Mitchell Trubisky on Sunday. He caught all 10 of his targets for 98 yards and added three broken tackles on the day. It’s crazy to say that those were season highs in all three categories for Johnson.

Offensive spotlight: Have a day, Jerick McKinnon. The Chiefs running back hauled in all eight of his targets for 70 yards and a score through the air. On the ground, he racked up 52 yards on 10 carries — including the game-winning score in overtime.

Defensive spotlight: The Texans' linebackers were firmly in Patrick Mahomes’ crosshairs on Sunday. Jake Hansen, Christian Kirksey and Christian Harris combined to allow 23 catches on 24 targets for 200 yards and a score against the Chiefs.

Offensive spotlight: Good things have happened when the ball has gone to Juwan Johnson this season. His 119.6 passer rating when targeted entering this week ranked seventh among tight ends with at least 25 targets, and that mark now sits at 124.7 after Johnson caught four of his six targets for 67 yards and two touchdowns against Atlanta. On initial review, Johnson was credited with a career-high three missed tackles forced after the catch.

Defensive spotlight: Alontae Taylor had the best game of his young career against Atlanta. Pending review, Taylor was targeted seven times and allowed just two receptions for 17 yards with four forced incompletions. It could have been an even bigger day for Taylor on the stat sheet, as he was charged with two dropped interceptions in coverage on PFF’s first-run analysis of the game.

Offensive spotlight: It wasn’t perfect, but Trevor Lawrence kept his excellent run going with a big day and a big comeback. Lawrence passed for 318 yards and four touchdowns, posting an adjusted completion rate of 72.5%.

Defensive spotlight: Micah Parsons did nothing to lose ground in the race for Defensive Player of the Year, causing constant problems for the Jaguars. He recorded a pass-rush win rate of 32.4% and even recovered a Trevor Lawrence fumble late in the game.

Offensive spotlight: With Brett Rypien at quarterback, the Broncos offense ran through Latavius Murray. The ninth-year running back gained 130 yards and a touchdown on 24 carries, forcing five missed tackles along the way.

Defensive spotlight: Three-time Defensive Player of the Year J.J. Watt had a vintage performance against the Broncos. The 12th-year interior defensive lineman has a 91.0 grade on first review, which would be his highest single-game grade since 2018. Watt lived in the backfield, tallying three sacks, four total pressures and a tackle for loss. He also added a forced fumble and a batted pass.

Offensive spotlight: Other than creating the chaotic final play, Patriots running back Rhamondre Stevenson had an otherwise successful game. On 19 carries, Stevenson ran for a career-high 172 yards and a touchdown, with 116 yards coming after contact.

Defensive spotlight: Josh Uche is one of the hottest defenders in the league right now. Since Week 9, his 92.2 grade leads defensive players. Against the Raiders, the second-year edge defender tallied four pressures and a 24% pass-rush win rate.

Offensive spotlight: In the battle between two of the league's best running backs, it was Austin Ekeler who came out on top in Week 15. The Chargers back ran for 58 yards on 12 carries — with 41 yards coming after contact — scoring once and moving the chains four times. He forced seven missed tackles and recorded two runs of 10 or more yards.

Defensive spotlight: Chargers cornerback Michael Davis continued his strong run of play, giving up just one catch for four yards from three targets in coverage. He forced an incompletion and allowed a 42.2 passer rating on the day. 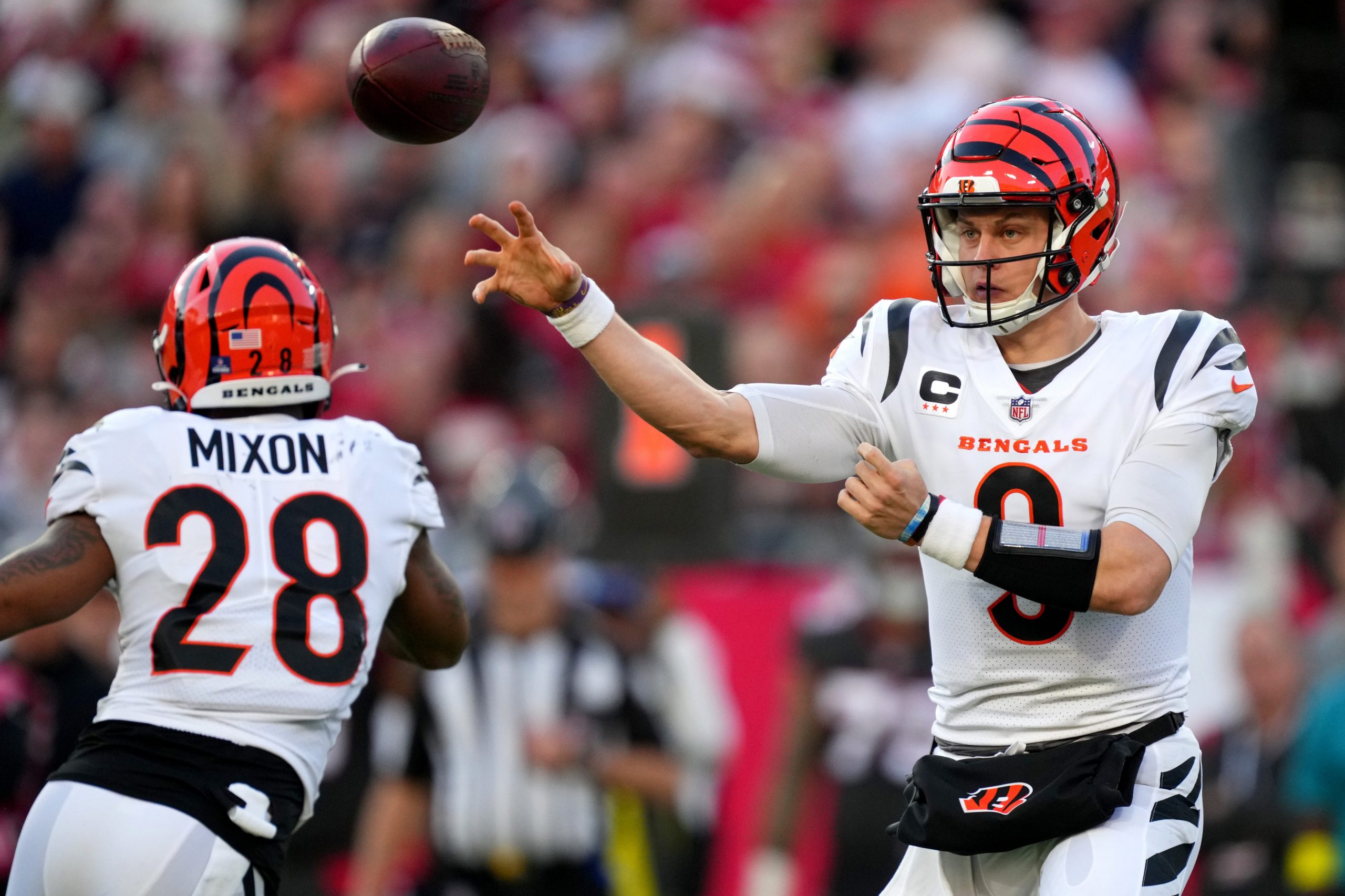 Offensive spotlight: It was a slow burn, but Bengals quarterback Joe Burrow came alive in the second half to lead and complete Cincinnati’s comeback win. The quarterback went 27-for-39 for 200 passing yards and four passing touchdowns and finished the game with a 79% adjusted completion percentage.

Defensive spotlight: Buccaneers cornerback Carlton Davis was lined up with all-pro receiver Ja’Marr Chase in this game, and Davis was up to the challenge. He finished the game with a 76.2 grade in coverage having recorded an interception and three forced incompletions.

Offensive Spotlight: Giants running back Saquon Barkley was the focal point of the offense, as usual. He accumulated 23 touches for the game and was responsible for 11 of the team’s 19 chain-moving runs. Quarterback Daniel Jones leaned on the quick underneath passing game, which in turn helped lighten the decision-making process and took the stress off the offensive line. Jones didn’t produce a single turnover-worthy play on the night and also didn’t get sacked.

Defensive Spotlight: First-round rookie edge rusher Kayvon Thibodeaux was the star of the night for New York. He came up with a huge strip-sack for a touchdown while racking up three tackles for loss against the run. And on the interior for New York, Dexter Lawrence was once again an impact performer, totaling five pressures and a 26% pass-rush win rate on the night.

Offensive Spotlight: Tackling the 247-pound A.J. Dillon can’t be fun, doing so in freezing temperatures must be even worse. The Packers' third-year running back rumbled for 36 yards and two touchdowns on 11 carries, forcing five missed tackles along the way. Dillon added 35 yards on three catches as well before leaving in the fourth quarter after suffering a possible concussion.

Defensive Spotlight: Packers linebacker Quay Walker had his best game yet in his rookie season. The first-rounder from Georgia has a 91.4 grade on first review, which would be the highest of his career by over 13 points. Walker got home with a sack on one of his only four pass-rushing snaps of the night. He also had a tackle for loss and two run-stops.