NFL scores and recaps for every Week 10 game

Vikings cornerback Patrick Peterson intercepts a Josh Allen pass in the end zone. The Vikings came from behind to beat the Bills 33-30 in overtime. Ag3i9021

PFF broke down the numbers immediately after every NFL Week 10 game, including scores, rookie standouts, offensive line performances and more.

Offensive spotlight: Panthers WR Laviska Shenault put together a standout performance in Carolina's upset victory, finishing with three receptions for 17 yards in addition to two carries for 42 yards and a touchdown. Additionally, Shenault forced two missed tackles on the evening, and his 41-yard touchdown run turned out to be the difference in the game.

Defensive spotlight: Panthers LB Shaq Thompson was excellent on Thursday, posting an impressive 90.0-plus overall grade on initial review. Thomas made more than his fair share of plays against the run for the Panthers defense, posting four run stops and a tackle for loss or no gain across 22 run-defense snaps. Additionally, Thompson impressed in coverage, allowing three receptions from five targets into his coverage for a measly three receiving yards in addition to accumulating two coverage stops.

Even in a losing effort, Falcons safety Richie Grant also performed at a high level, especially in coverage. On four targets, Grant allowed just one reception for two yards and forced three incompletions in addition to generating two coverage stops en route to 90.0-plus coverage grade on initial review. 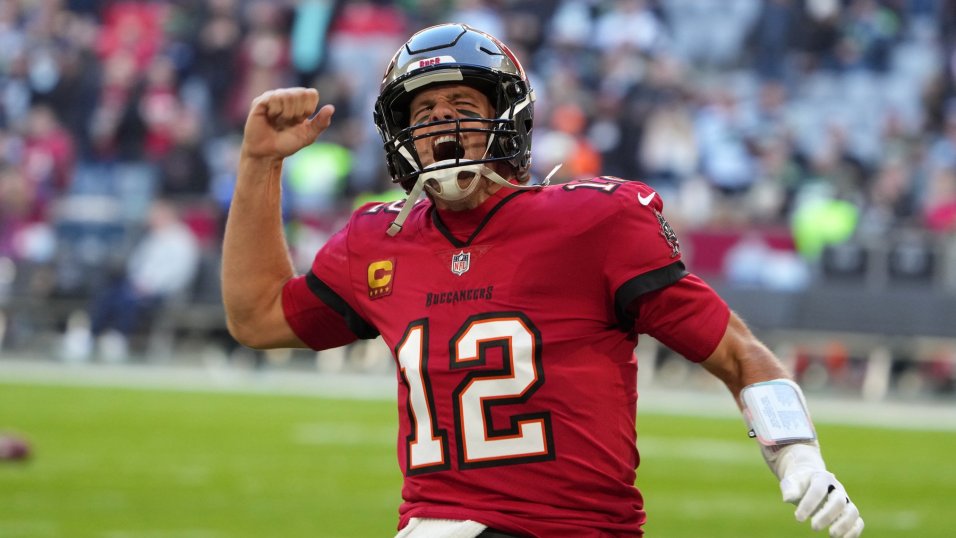 Offensive spotlight: Despite the result, Seahawks quarterback Geno Smith had himself yet another impressive game, going 23-of-33 for 275 yards and two scores. He added three big-time throws to his season total and picked up 114 yards from passes thrown 10 or more yards downfield.

If PFF's first-run grading holds, it will be yet another 80.0-plus PFF grade for the veteran quarterback. 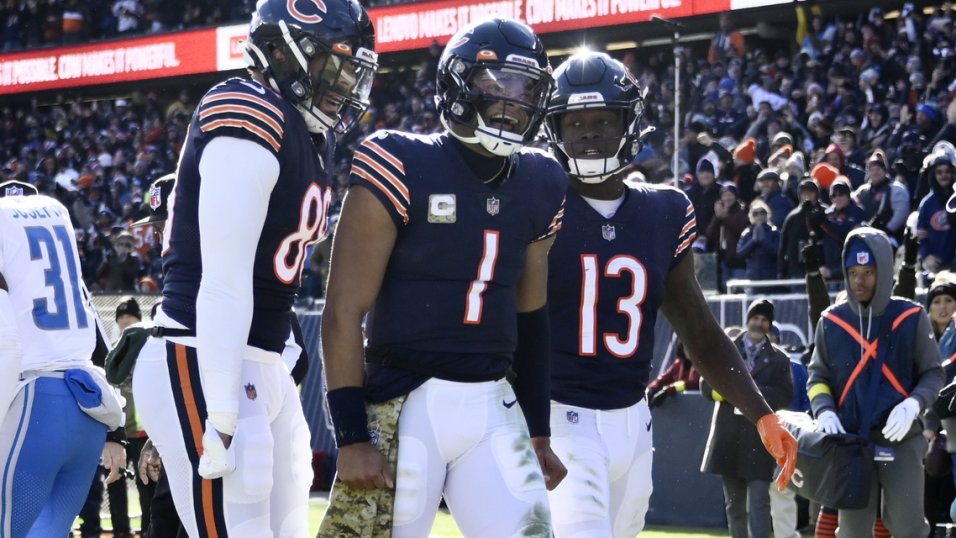 Defensive spotlight: Lions cornerback Jeff Okudah got the best of his fellow Ohio State product with a pick-six on Fields. He didn’t allow a catch on two targets in coverage. Offensive spotlight: Tua Tagovailoa was once again almost flawless for Miami, and the team is still undefeated in games he has both started and finished. Today, he completed 25-of-32 attempts for 285 yards and three scores at 8.9 yards per attempt.

Defensive spotlight: Melvin Ingram III remains an incredibly consistent pass-rusher for Miami, even as they add players to try and upgrade the pass rush. Ingram had a pair of sacks and an absurd pass-rush win rate of 45.8% Offensive spotlight: Tennessee had gotten 658 receiving yards from all their wide receivers combined over the first nine weeks of this season — the fewest in the NFL by nearly 200 yards. Nick Westbrook-Ikhine tacked 119 yards (and two touchdowns) onto the unit totals against the Broncos. All five of his receptions resulted in a first down or touchdown, and he became the third Titans receiver to record multiple contested catches in a game this season.

It was a much-needed strong performance from Westbrook-Ikhine, given that Denver was able to hold Derrick Henry to fewer than three yards per carry.

Defensive spotlight: The Titans consistently got home with their pass rush despite missing Jeffery Simmons and Bud Dupree. Russell Wilson was sacked six times, and each of Mario Edwards, Denico Autry, Rashad Weaver and DeMarcus Walker recorded at least five pressures on PFF’s first run of analysis. It was an impressive performance by a short-handed unit. Offensive spotlight: Vikings wide receiver Justin Jefferson made one of the greatest catches in NFL history on a fourth-and-18 desperation play to keep the Vikings alive. Jefferson finished the game with 10 catches for 193 yards and 3.7 yards per route run.

Defensive spotlight: Patrick Peterson ended the game with a pair of interceptions of Josh Allen, including the final one in the end zone to secure the Vikings win. Peterson had as many interceptions as first downs allowed in coverage. Offensive spotlight: Call him a game manager if you must, but Daniel Jones has been executing his role to a “T” all season. He went 13-of-17 for 197 yards and two scores. Jones finished the game with a superb 88.7% adjusted completion percentage.

Defensive spotlight: The Giants' interior defensive line had about as dominant a game as you’ll see. Leonard Williams recorded four run stops in a lights-out performance against the run, and Dexter Lawrence racked up an absurd eight pressures — including two sacks. They set the tone all day, as the Giants kept the Texans out of the end zone for the first 36 minutes of the game. Offensive spotlight: Kadarius Toney just struck fear into the hearts of defensive coordinators throughout the AFC. He got the most run he’s seen in a Chiefs jersey yet, and he delivered. Toney hauled in four catches on five targets for 57 yards and a score. He also added three broken tackles after the catch and is already easily Kansas City's most dynamic weapon on offense. If JuJu Smith-Schuster is sidelined for a while, Toney will get featured even more in the coming weeks.

Defensive spotlight: Andre Cisco was everywhere for the Jaguars in the loss. He laid a couple of brutal hits on Chiefs wide receivers to break up passes, including the one that knocked JuJu Smith-Schuster out of the game. It was his interception midway through the fourth quarter, though, that almost brought the Jaguars back into the contest. He is set to finish with the highest coverage grade on the team. Offensive spotlight: It has been a bit of a struggle for Steelers running back Najee Harris to get things going this season. He hasn’t had a 100-yard game this year, and though he didn’t reach that benchmark against the Saints, he recorded a season high in rushing yards, with 99 on 20 carries. Harris had two explosive runs of 10 or more yards with a 5.0-yard average per carry.

Defensive spotlight: Saints linebacker Kaden Elliss was the team's highest-graded defender on first review. He recorded an initial 76.8 defensive grade with a 77.1 run-defense grade. That came after two solo stops in run defense and one sack with two pressures as a pass-rusher. 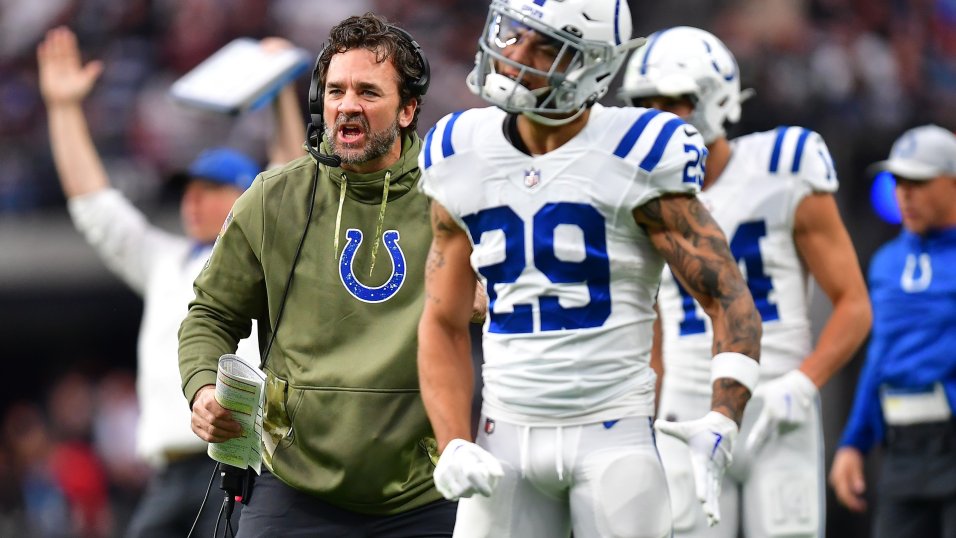 Offensive spotlight: Jonathan Taylor finally got back on track, rushing for 148 yards on 23 carries. Two of his runs went for 10 or more yards, and he added five first downs and a game-changing 68-yard touchdown scamper.

Defensive spotlight: Kenny Moore II tallied two stops, including a tackle for loss against the run. He was equally successful in coverage by not surrendering a single reception the two times he was targeted. Offensive spotlight: Aaron Jones registered his fourth 100-yard rushing game of the season thanks to four 10-plus-yard runs during the evening. Jones eclipsed nearly 6.0 yards per rush and added four first downs and a score on 21 carries. Offensive spotlight: Colt McCoy performed admirably in relief of Kyler Murray, who was nursing a hamstring injury. The 13th-year quarterback earned an 83.5 grade on first review. The former Texas great also tossed two big-time throws and had no turnover-worthy plays in the win.

Defensive spotlight: Cardinals cornerback Antonio Hamilton had a career game against the Rams. He forced two incompletions and allowed only 22 yards on nine targets. He also impressed as a run defender, producing two stops. Offensive Spotlight: While quarterback Justin Herbert racked up four big-time throws in the first half, the lackluster pass protection and thin receiving unit were too much to overcome.

The Chargers were shut out in the second half and were limited to a mere 2.7 yards per play. Herbert spent over a third of his dropbacks under pressure, and when he was presented with a clean pocket, there weren’t many opportunities for him to attack.

Meanwhile, San Francisco had its usual winning formula: run the ball effectively for key stages of the game, control the time of possession and try to avoid any bad decisions from quarterback Jimmy Garoppolo. And the 49ers passer didn’t record a single turnover-worthy play in the contest and even added a big-time throw on one of his five pressured dropbacks.

Defensive Spotlight: Almost the entire 49ers defense showed out in a positive way against the Chargers. This group has established itself as a fast and physical unit, and they flew to the ball all night. The defense missed just one tackle; they also allowed 0.1 yards before contact per attempt on runs and recorded nine defensive stops on the 22 passes Justin Herbert threw less than 10 yards downfield. Offensive Spotlight: Despite facing one of the league’s best cornerbacks in Darius Slay, Terry McLaurin had a field day against the Eagles. The fourth-year receiver caught eight of his 11 targets for 128 yards. He averaged a staggering 3.76 yards per route run, his highest mark all season.

Defensive Spotlight: Chauncey Gardner-Johnson has continued to look like an excellent addition for the Eagles defense. The former Saint finished with a 91.8 grade on first review, which would be the highest of his career. He had an interception and a forced incompletion on 32 coverage snaps. His six interceptions this season now lead the NFL.