The same is true for fantasy points per route run (FP/RR).

So which wide receivers stood out from a FP/RR perspective in 2017 — and which teams struggled against receivers on a per-route basis? 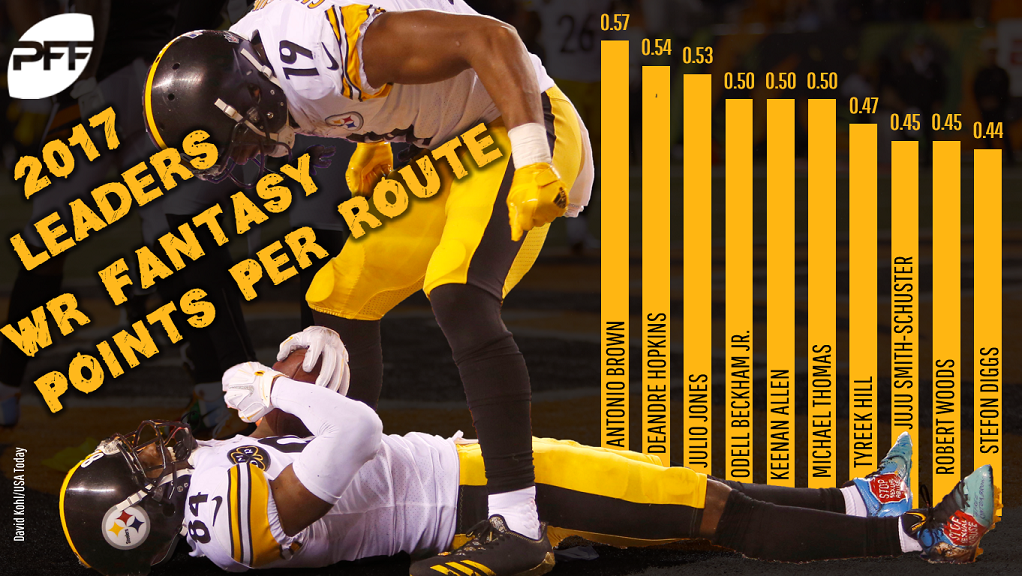 The first six names are no-brainers. But seeing Tyreek Hill, JuJu Smith-Schuster, and Robert Woods slip into the top 10 may be a bit surprising. (All of those players ranked high in terms of fantasy points scored above aDOT-based expectations, too.)

The bottom 10 (min. 100 routes) is filled with names you hardly recognize: Bryce Treggs, Kaelin Clay, Chad Hansen, and others.

The average FP/RR among receivers last year was 0.30, which means guys like Antonio Brown, DeAndre Hopkins, and Julio Jones were scoring fantasy points at nearly double the rate compared to the average receiver. That really helps put into perspective just how valuable it can be to have a truly elite WR1 for fantasy purposes.

Any study that puts players like Brown, Hopkins, Jones, and Odell Beckham Jr. at the top — and players like Treggs, Clay, and Hansen at the bottom — passes the eye test, and the data (shown in full below) speak for itself.

It gets really interesting when you line up teams that give up a plethora of FP/RR with a wideout that is efficient in this category. We sliced and diced the numbers and found out which teams give up the most FP/RR to wideouts last season (e.g. excluding tight ends and running backs).

Here are the results:

Two Florida teams bookend these rankings: Tampa Bay gave up the most FP/RR to wideouts, while Jacksonville gave up the fewest.

This data is fantastic for DFS purposes — and I intend to keep you updated throughout the year as 2018 data starts rolling in — but it can be useful from a season-long perspective as well.

The Falcons do have some touch wideout matchups (against Jacksonville and Cincinnati – the two best team from a FP/RR given up perspective last year), but overall, things are lining up for Julio Jones in 2018.

The Vikings have the sixth-easiest schedule from a FP/RR perspective next season, which bodes well for Diggs and Thielen. It doesn’t hurt that Kirk Cousins is now their quarterback, too.

The Redskins don’t have superstar wideouts, but I’m throwing them in here because they have the easiest schedule from a FP/RR perspective next season.

Doctson and Richardson might not win your league, but 14 of their 16 games are against teams that ranked in the bottom half of the league in terms of FP/RR given up to opposing wideouts last year.

Below is the full list of players, sorted by their fantasy points per route run from 2017. Only receivers who ran a minimum of 100 routes last year are included, and the fantasy points are based on PPR scoring.