The QBs with the most fantasy rushing potential in 2019

Yesterday we discussed a concept for fantasy football known as the Konami Code – a borderline cheat code for drafting fantasy quarterbacks, applicable only to the league’s most prolific running quarterbacks. Today, we’ll be looking at all quarterbacks who might qualify (roughly 5.5 rushing attempts per game) in 2019, and which ones are worth prioritizing come draft day. 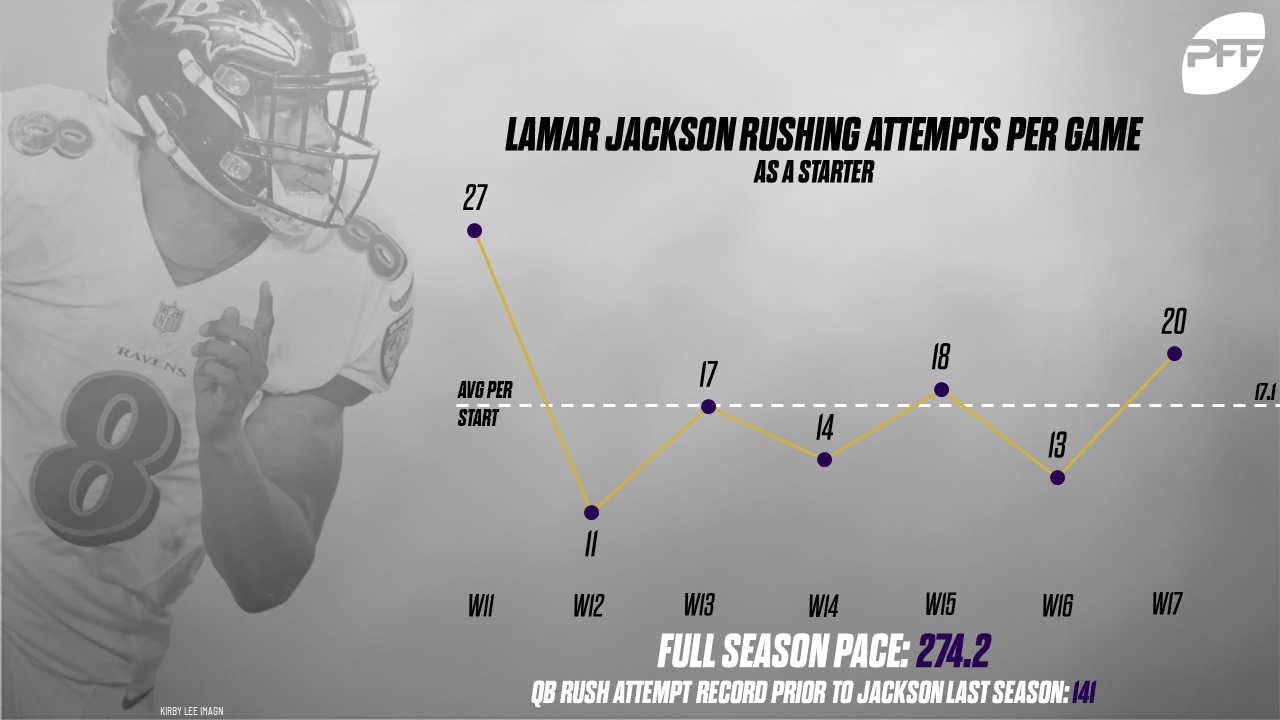 Jackson has been (rightfully) criticized for poor passing efficiency in his rookie year, and also had to contend with poor overall volume. He ranked last among all quarterbacks in dropbacks per start (27.0), while Baltimore ran the ball at a historically high rate. Last season, once Jackson was named the starter, Baltimore passed on only 36% of its plays, while the league-average rate was 58%. Still, I’m optimistic Jackson improves on both counts.

Last season, Jackson effectively played in Joe Flacco’s offense, only earning playing time after Flacco suffered a hip injury. Now, Baltimore will have a full year to build its offense around Jackson. They’ve already done this via the draft, adding speedy playmakers in Marquise Brown, Miles Boykin, and Justice Hill, to better complement Jackson's style of play. In terms of play-calling, Greg Roman has been announced as the team’s new offensive coordinator. Fellow mobile quarterbacks Colin Kaepernick and Tyrod Taylor both had their best fantasy seasons under Roman.

Though Jackson struggled as a passer last season, he was far more efficient in college, finishing his career with a depth-adjusted completion percentage that was 3.2% over his expectation (same as Patrick Mahomes).

Perhaps the best metric to prove my ultimate point — that Jackson is a screaming value at ADP (QB21) with legitimate league-winning potential in 2019 — is this: Jackson averaged 0.83 fantasy points per dropback in 2018. Not only is the that the best mark this past decade, but it’s the best by 13%, and 21% better than Mahomes’ number last season. From Week 11 (once Jackson was named the starter) until the end of the regular season, Jackson ranked eighth in fantasy points scored. The way I see it, that might be closer to his absolute floor in 2019.

Allen also saw 40% of his (fantasy) passing production come on deep passes (balls traveling 20 or more yards through the air), which ranked first among all quarterbacks last year. When he wasn’t racking up fantasy points on the ground or via deep passes, he was posting league-low efficiency numbers, which was most of the time. Last season, Allen ranked as our third-worst-graded passer (out of 30 qualifying quarterbacks), while also ranking second-worst in passer rating. Unlike Jackson, Allen’s college numbers were far more troubling, and we should also note he averaged just 29.1 rushing yards per game across his final two seasons in college.

Over the last six weeks of the season, Allen averaged 24.2 fantasy points per game, which ranked first over this stretch. That’s his upside — it’s real and it’s drool-inducing. Still, all of his numbers imply a massive looming regression to the mean. That’s true, and he carries considerable risk and week-to-week variability, but he’s still a massive value at ADP (QB18).

Murray appears to be as dual-threat as it gets, ranking as our highest-graded passer and second-highest-graded runner in college last season. Last season, Murray’s passing stats were nearly identical to Baker Mayfield’s best season, while also adding 1,071 yards and 12 touchdowns on the ground. In fact, he totaled the most passing yards and most passing touchdowns ever of any Division I quarterback with at least 1,000 rushing yards.

New head coach Kliff Kingsbury runs a potent fast-paced and high-powered offense that once helped lift another mobile quarterback to elite heights. In 2012, with Kingsbury as his offensive coordinator, Johnny Manziel totaled 510.2 fantasy points, the fifth-most by any Division I quarterback since 2000. In 2013, after Kingsbury left, Manziel saw a massive reduction in fantasy points (429.5), rushing volume (1,410 to 759), and rushing efficiency (7.0 yards per carry to 5.3).

Put all of this together and Murray has legitimate QB1 potential in his rookie year. 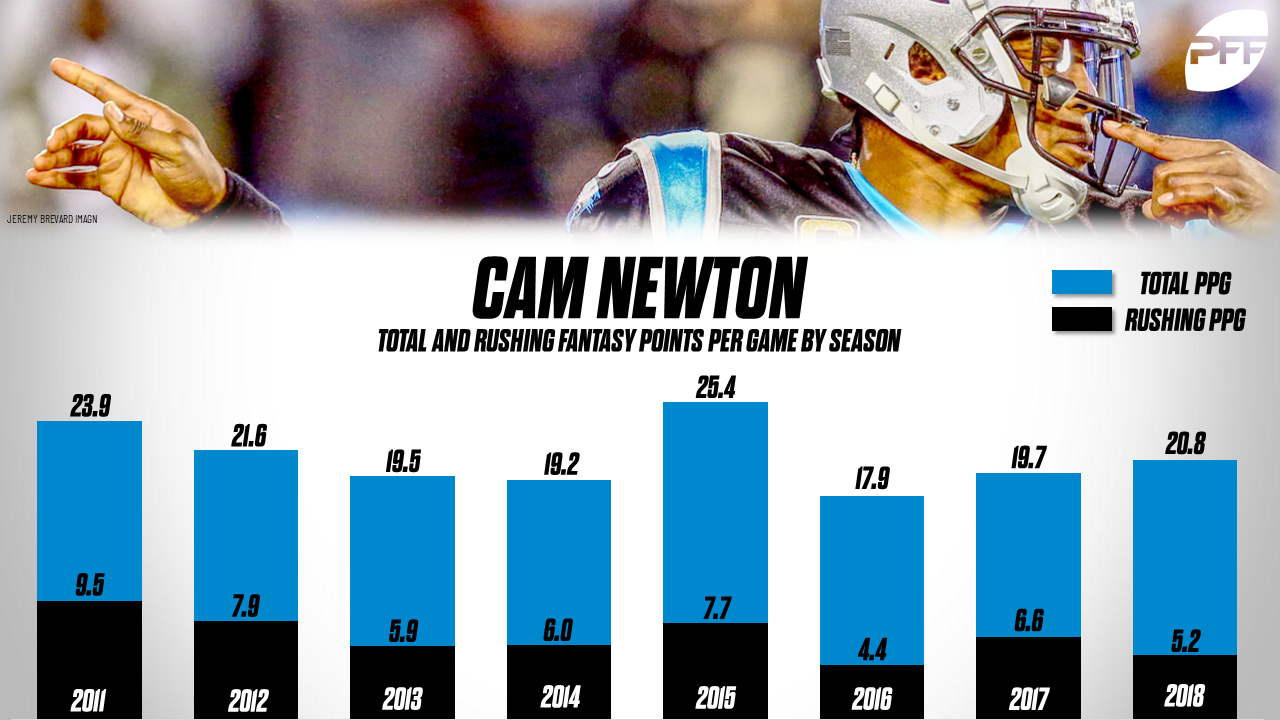 If Jackson really is “the one,” he’d have to knock Newton off of the throne. Since 2000, Newton holds four top-five seasons and seven top-20 quarterback seasons in total rushing attempts. Since entering the league, 32% of his total fantasy points scored has come on the ground. He's finished top-five in fantasy points per game five times. Without the rushing production, he would have ranked about 23rd on average. Essentially, due to Newton’s mobility, he offers you low-end QB2 production just through the air, with an additional 7.6 fantasy points per game on the ground. That’s enough for a high-end QB1 expectation any year he’s starting.

2018 was the second-worst finish of his career in fantasy points per game (eighth), and perhaps unsurprisingly, it was also his second-worst finish in rushing fantasy points per game (5.2). In rushing attempts per game, he wasn't too far off his prior career average (7.6) in 2018 (7.2). I’d project a regression to the mean, but I think it’s likelier Christian McCaffrey is going to continue to eat into Newton’s rushing production, as scrambles continue to be replaced by quick dump-off passes.

In 2017 — Watson's rookie season — he averaged 27.2 fantasy points per game in games started, the most by any quarterback in any season all-time. Last season, he ranked fourth among all quarterbacks in fantasy points per game (20.7). In both seasons he averaged over 5.5 rushing attempts per game. He’s a good bet to finish top-five again in 2019, and perhaps we should be expecting even more rushing volume this year, with Watson now a full year-and-a-half removed from a torn ACL.

Prescott averaged 4.7 rushing attempts per game in 2018, after averaging 3.6 across each of his previous two seasons. This has helped lead him to finishes of 10th, 10th, and sixth in fantasy points scored across his first three seasons in the NFL. His rushing volume has helped to make him one of the league’s safest quarterbacks on a week-to-week basis but hasn’t given him much of a ceiling. That said, his Konami Code potential has yet to be fully tapped at the NFL level. Prescott averaged 13.6 rushing attempts, 65.0 rushing yards, and 1.0 rushing touchdowns per game over his final three seasons in college. Perhaps his full potential gets realized this season, following Dallas’ decision to replace OC Scott Linehan with Kellen Moore. At the very least, he’s a strong value at current ADP (QB20). And based on recent news, I would anticipate Dak being used as a runner more.

Last season, Trubisky ranked fifth in rushing attempts per game (4.9) and 11th in fantasy points per game (18.8). Like with many of these other quarterbacks, his rushing production helped mask passing-related deficiencies — among 33 qualifying quarterbacks last season, Trubisky ranked third-worst in PFF passing grade. From Weeks 4-8, Trubisky averaged a whopping 58.0 rushing yards per game along with 31.0 fantasy points per game, both numbers easily leading all quarterbacks over this stretch. That won’t be the norm for Trubisky moving forward, but it does speak to his potential, and especially if he manages to improve as a passer in his second year in head coach Matt Nagy’s offense.

Unfortunately, I don’t think this is a number that’s likely to regress closer to his mean, and Wilson has passing-game volume concerns as well. Last season, Seattle ranked last in pass percentage when trailing and second-to-last in pass percentage when leading. Barring a defensive collapse like what we saw from Seattle in 2017, Wilson will again need to rely on hyper-efficiency to post QB1 numbers in 2019.