Best ball advice: The most and least consistent 2018 players based on fantasy points

You’ll notice that our best ball rankings look slightly different than our redraft rankings. That’s entirely due to one thing: week-to-week consistency.

Last season, Amari Cooper finished 19th at the position in total fantasy points. He played in 15 games but scored 52% of his total fantasy points in just three (13% of his total games). Outside of these games, Cooper averaged just 8.7 fantasy points per game, which would have ranked 57th among wide receivers. This means he was mostly useless for those of you who owned him in typical redraft leagues — it was highly unlikely you were lucky enough to start him only in his best weeks (Weeks 4, 12, and 14), and otherwise, he hurt you when you did start him. However, in best ball leagues, Cooper was far more valuable.

In best ball leagues volatility is your friend — there are no start/sit decisions and your highest-scoring players automatically slide into your starting roster at the end of the week. It’s no surprise then that Cooper ranks much higher in our best ball (rather than redraft) rankings

With Cooper and best ball leagues in mind, I wanted to look at 2018’s least and most consistent scorers for fantasy

Tristan Cockroft does this every year for ESPN, as does John Paulsen for 4for4. I’m going to approach this in a similar way to Paulsen. We’ll be looking at every player in every week over the course of a full season. We’ll then calculate a player’s standard deviation to determine how much variation there was in their fantasy scoring on a week-to-week basis. Then, we’ll standardize these scores across scale by dividing a player’s fantasy points per game into his standard deviation, to determine that player’s coefficient of variation. (You can calculate this yourself, with a little bit of effort and if you’re a PFF Edge or Elite subscriber, by using our fantasy stats.)

Among all non-quarterbacks (min. 10.5 fantasy points per game), here were last season’s 20 least consistent fantasy scorers by coefficient of variation:

(This is our first look at fantasy consistency, simply diving in on fantasy points scored. It’s really a toe-in-the-water look, as using fantasy points makes a study very subject to touchdown luck. But it’s a good starting point. In our next piece we’ll look at consistency of role and usage, which takes this a step further.) 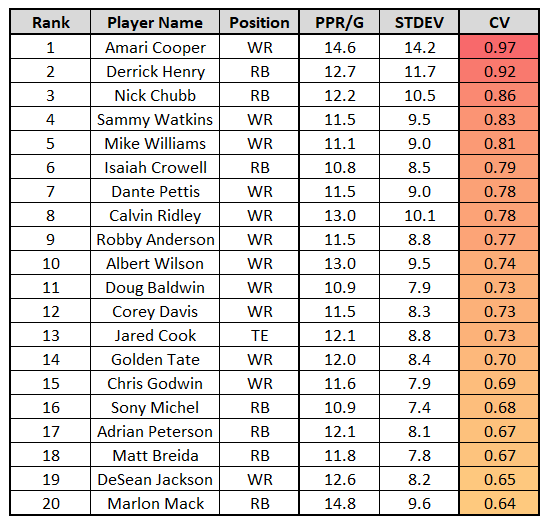 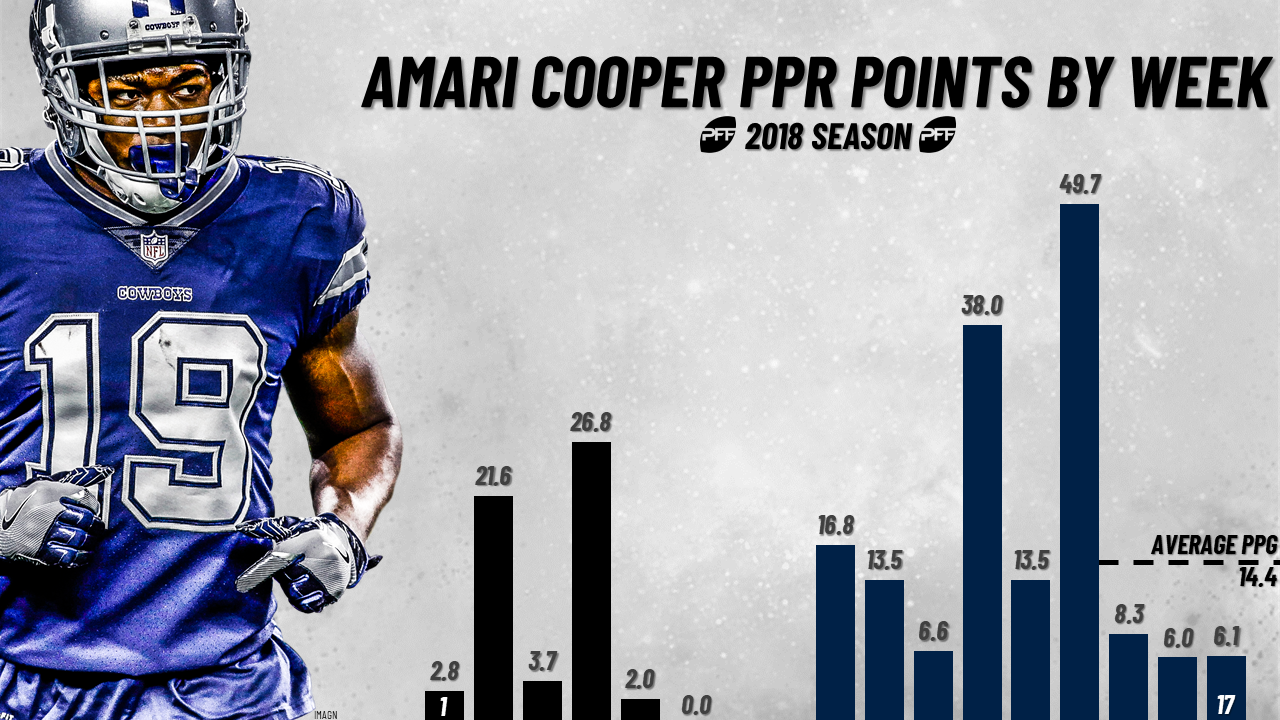 Cooper was not only our most inconsistent player this year; he was also our most inconsistent player in 2017 as well. That year he scored a whopping 32% of his fantasy points for the season in just one game (Week 7). If that game were excluded, he would have fallen from 10.7 fantasy points per game (31st among wide receivers) to 7.9 (63rd). It seems as though inconsistency is just something you’re going to have to deal with if you decide to draft Cooper. Make sure you’re appropriately devaluing him in typical redraft leagues. 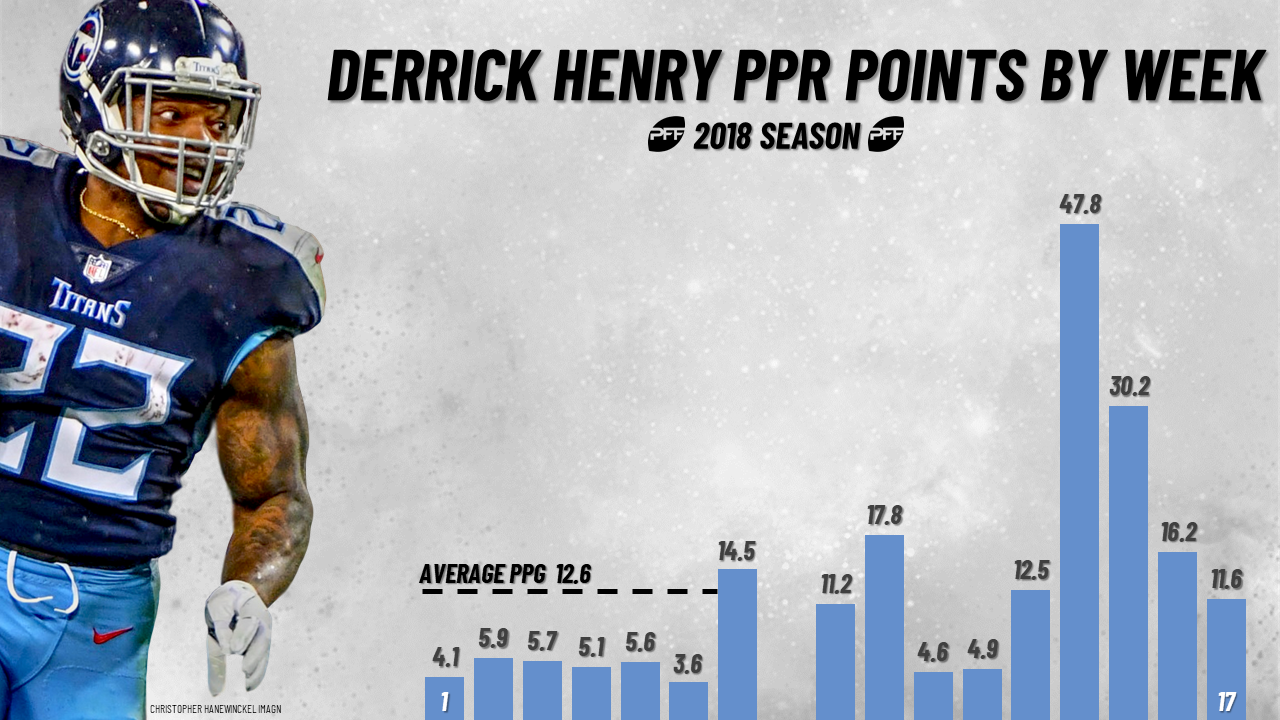 Henry combined to total 78.0 fantasy points across just two games last season (Weeks 14-15). Those two games made up a whopping 38% of his total fantasy points for the year, despite playing in all 16 games. Although we might be paying too high of a price on Henry in 2019 for just big two games, it is encouraging to note his production increased at the tail end of the season. Five of his seven-highest-scoring games came across his final five games of the year. Perhaps due to his success at the end of the season, Tennessee will be more inclined to give him a more consistent workload next year.

Chubb ranked third on this chart, but through no fault of his own. His numbers are obscured by the fact he was Cleveland’s backup for the first six games of the season, never drawing more than three touches in any of these games. From Week 7 on, Chubb was actually fairly consistent, and certainly productive, averaging 16.5 fantasy points per game, which would have ranked 11th-best over the course of a full season.

Watkins’ ranking here is mostly injury-related, due to hamstring and foot injuries. Including the playoffs, he played on more than 12 snaps in just 10 games. Across those 10 games, he was moderately consistent and fairly productive, averaging 13.6 fantasy points per game, which would have ranked 25th-best last year. Watkins should be even more consistent and productive next season, likely assuming Tyreek Hill’s role as the team’s WR1 as Hill has likely discipline looming.

Williams ranks highly here due to being too heavily reliant on touchdowns (a naturally high-variant stat) for fantasy productivity. He scored 10 touchdowns (fifth-most among wide receivers) but averaged just 41.5 receiving yards per game (55th). In total, 33% of his fantasy points came on touchdowns, which ranked third-most among wide receivers. With Hunter Henry returning, adding another capable big bodied receiver in the end zone, Williams is a regression candidate in 2019.

Pettis presence here is due to injury and bizarre usage to start his career. Once those factors are adjusted for, he was surprisingly consistent and productive. In games he saw at least five targets and didn't leave early due to injury, he totaled 14.1, 17.7, 31.9, 13.9, and 13.3 fantasy points, averaging 18.2 fantasy points per game.

Anderson and Jackson rank highly in this chart due to the nature of their usage. Last season, 49% of Jackson’s fantasy points came on deep targets, while that number sat at 36% for Anderson. Both numbers rank top-six among 44 qualifying wide receivers. As we’ve mentioned before, deep threats tend to be far less consistent than, for instance, possession wide receivers. Similarly, Albert Wilson was overly reliant on big plays, which explains his ranking in this chart.

In 2019, Michel scored fewer than 5.5 fantasy points four times. Three of those games came when on the injury report. Though injuries played a role in his inconsistency (and they likely will continue to do so for the remainder of his career), we also know that he’s serving in an inconsistent role for fantasy. Michel rarely sees targets, in the “LeGarrette Blount role” in the Patriots offense and will continue to be highly gamescript-dependent (i.e. start him in games the Patriots are expected to win big.)

Mack and Peterson, like Michel, were productive but inconsistent due to the nature of their role. They were their teams’ early-down workhorses, but not their team’s bell cows. They rarely saw targets, so, when their team was trailing, they were routinely taken off the field. Last season, Peterson averaged 16.7 fantasy points per game in victories but only 8.5 fantasy points per game in losses. Mack scored 70% of his fantasy points in games Indianapolis won by 14 or more points. Both are better options in best ball leagues and in DFS than typical redraft leagues.

For comparison, here were last season’s 20 most consistent fantasy scorers by coefficient of variation: 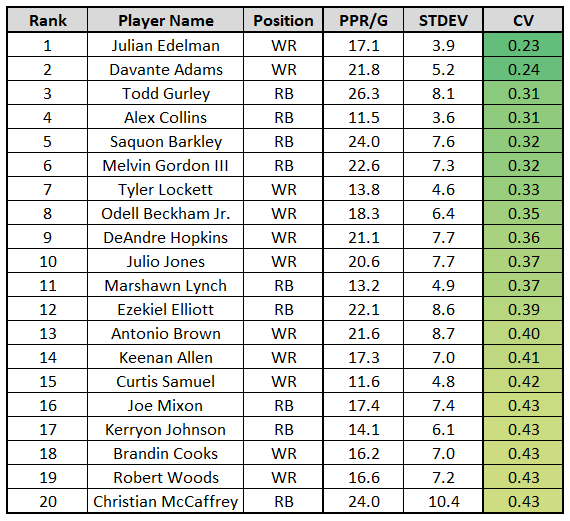 I won’t go too in-depth here, but I will note that almost all of these players also ranked highly in consistency of usage, which is the topic we’ll be discussing in our next article.

Finally, as a bonus aside, I wanted to look at positional consistency. Looking only at the 20 highest-scoring players at each position, here’s how each position fared in terms of coefficient of variation. The quarterback position was the most consistent, followed by running backs, then wide receivers, and then tight ends. Last season, running backs ranked fourth, behind wide receivers and then tight ends. This jump likely had something to do with an increase in targets for running backs last year.