The candidates to be 2018's No. 1 fantasy running back

Take a glance across the early 2018 PFF rankings and you’ll find only a few differences at which player each of our analysts have atop the various spots.

There are a handful of favorites to be the top producer at their respective position, but there are some longshots too. Last week we took a look at some candidates to be the top quarterback, and now we turn our attention to the fantasy backfield.

After seeing wide receivers steal some thunder in recent years, running backs reemerged as the fantasy kingpins in 2017. Let’s take a look at some potential RB1 candidates for 2018 along with my opening odds:

Bell was the only running back in the league last season to eclipse 300 rushing attempts. His 406 touches were a career-best mark. He posted his lowest yards-per-carry average (4.0) since his rookie year in 2017, but he more than made up for it by pulling in 85 of his 103 targets for 655 yards and two touchdowns.

Pittsburgh has had a running back finish as a top-four fantasy producer in four straight seasons and Bell is a near-lock to do so again if he stays healthy. Staying on the field has been problematic though, as the 26-year-old has only played in 16 games once in his five pro seasons.

In 2016, Gurley became the first back in 15 years to average less than 3.2 yards per carry on at least 275 attempts. He finished as RB19 in standard formats and RB15 in PPR leagues. The coaching change to Sean McVay in Los Angles had a dramatic impact on his production.

Gurley rushed for 1,305 yards and 13 touchdowns and added 788 receiving yards and six scores through the air. He has cemented himself as one of the top fantasy running backs in the league entering 2018 and should make a strong push to challenge for the top spot if he plays 16 games.

Which player below has the best chance to be the top scoring fantasy running back in 2018 (PPR)?

Fully recovered from the wrist injury that cost him most of his 2017 campaign, Johnson appears poised to return as the focal point of the Cardinals’ offense. His ability to do damage a pass-catcher out of the backfield and to make players missed in the open field led to some monster numbers in 2016.

He forced 27 missed tackles on his 80 catches and another 44 on his 293 carries and came within 121 yards of becoming just the third player in league history to have 1,000 yards rushing and receiving in the same season while finding his way to the end zone 20 times during that breakout. Johnson will remain heavily involved in the team’s passing attack due to the lack of depth at receiver.

With his six-game suspension behind him, Elliott enters 2018 with much less baggage than he did a year ago. Despite playing in just 10 contests the Cowboys’ running back fell just 17 yards shy of 1,000 yards and still finished as RB10 in standard leagues and RB12 in PPR formats a year ago.

He shouldered a heavy workload (85.5 percent of snaps) in the games he did suit up for. Elliott should remain a bell-cow running back, but he will need to rack up touchdowns to push for fantasy’s top spot due to the fact he isn’t targeted in the passing game as much as the other running backs in this tier. 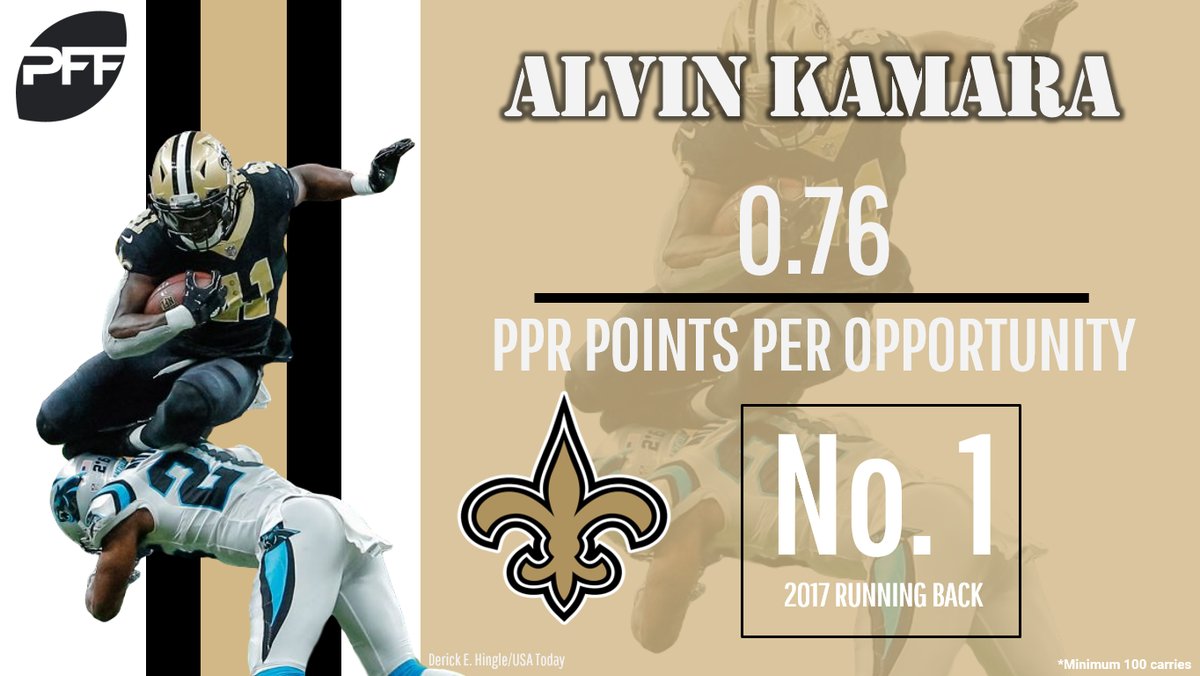 Kamara’s debut season couldn’t have gone much better. Every time he touched the ball there was a chance for something special to happen. He broke a tackle on a league-leading every 3.5 touches and he led all running backs in PPR points per opportunity (0.76).

Over the final eight games of 2017, Kamara finished inside the top 10 in weekly PPR points seven times, including sitting atop all running backs in fantasy scoring three weeks during that span. With Mark Ingram out for the first four games, his workload should go up in Year 2.

Fournette is a near-lock to get to 300 carries if he plays 16 games, but durability remains a concern. He was dinged up throughout his debut season and missed three games. Coupled with the injury issues during his LSU day it will be something to watch.

With Jacksonville beefing up the line up front, including free agent addition Andrew Norwell, Fournette’s stock is rising. The Jaguars led the league last season with 141.1 yards per game and will ride the second-year back mostly. If the offense takes a step forward he could see the additional scoring opportunities to finish as the leader.

The Barkley buzz is taking over the fantasy nation and it may just be warranted. There’s plenty to like on film and the Giants are all in on feeding him the rock. It’s tough to seeing a first-year player coming first in fantasy points though. I’m buying Barkley, but just not to be No. 1 this season. However, a top-five finish in 2018 remains a solid possibility.

Hunt led the NFL in rushing with 1,327 yards (lowest total by a league-leader since 1990) and with 48 broken tackles. Hunt became just the fifth rookie since 2000 to eclipsed 325 touches. Andy Reid’s system produces some nice featured backs and Hunt fits the bill. The Chiefs would like to manage his workload a bit more this season though and have the depth to do so. He’s a solid RB1, but it’s hard to envision a path for him to get the top.

Cook showed well, as he averaged 13.6 fantasy points per contest before going down for the season in Week 4. Minnesota landed Kirk Cousins in the offseason, but the recipe for success will remain playing great defense and moving the chains with Cook. If you carry his four-game production from 2017 over 16 games, you get to about 1,775 total yards. With Jerick McKinnon out of the mix, Cook will see his role as receiver likely grow. The upside is immense and the current value is right for the Vikings’ running back.

As long as Gordon continues to see little competition for carries his value remains high. He averaged just 3.9 yards per carry last year, but his volume was high as he registered 284 rushing attempts and caught 58 balls. His scoring trend is what has put him in RB1 range the past two years though. After not scoring a single time as a rookie, Gordon has now scored 12 times in each of his past two seasons.

Mixon has the talent to be included on this list. His numbers were impacted during his first season from playing behind one of the league’s worst offensive lines and getting buried on the depth chart to start the year. The Bengals offense sputtered bad enough to have them fire their offensive coordinator in September and when Mixon finally got a crack to start he got hurt. The team has improved on the offensive line and Mixon has dropped over 10 pounds in hopes to pick up a step. He comes with risk but offers top-five potential at a RB2 price.