Fantasy takeaways from the changes in offensive playcallers

13 different teams will have a new offensive playcaller in 2018. Today, I wanted to examine the historical usage tendencies of these 13 different playcallers to see what impact their arrival or promotion might have for fantasy football.

The best way to do this, I felt, was by looking at the expected fantasy point per-game totals of each playcaller’s RB1, WR1, WR2, WR3, and TE1 throughout their careers. We’re measuring this by per-game Actual Opportunity – an all-encompassing usage statistic that you can read more about here.

Using the past decade (2008-2017) as our sample, here is every current offensive playcaller with at least two full seasons of experience as a head coach or offensive coordinator. 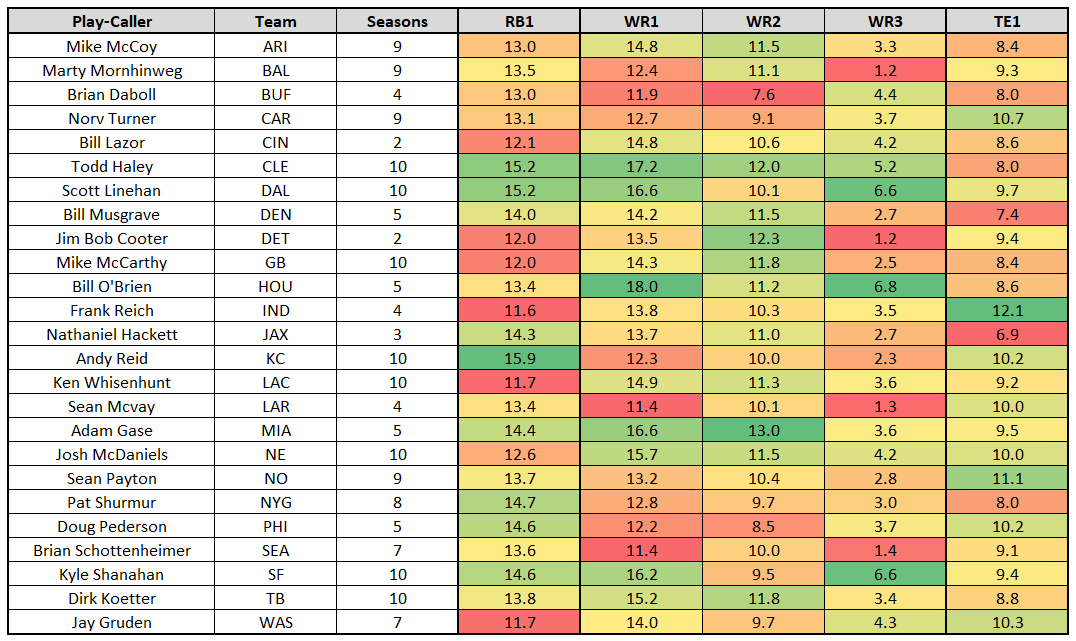 Here’s the differential (from last year’s playcaller to this year’s) in expected fantasy points per game at each position among all coaching changes where each coach had at least two qualifying seasons.

Here’s the single-most-important fantasy takeaway from each new hire, along with links to Jeff Ratcliffe's analysis on the PFF Fantasy Podcast:

After five seasons calling plays in Arizona, Arians will be replaced by McCoy in 2018. The clear takeaway for fantasy purposes is what should be an increase in volume for TE1s. In each of four seasons coached by McCoy, Antonio Gates totaled at least 85 targets. Meanwhile, Arizona ranked fourth-lowest in team tight end targets during Arians’ tenure. Tight end Ricky Seals-Jones is an excellent value in current drafts, typically going undrafted in most leagues. He was easily our most efficient tight end on a per-route basis last year, turning 68 routes into 201 yards and three touchdowns. 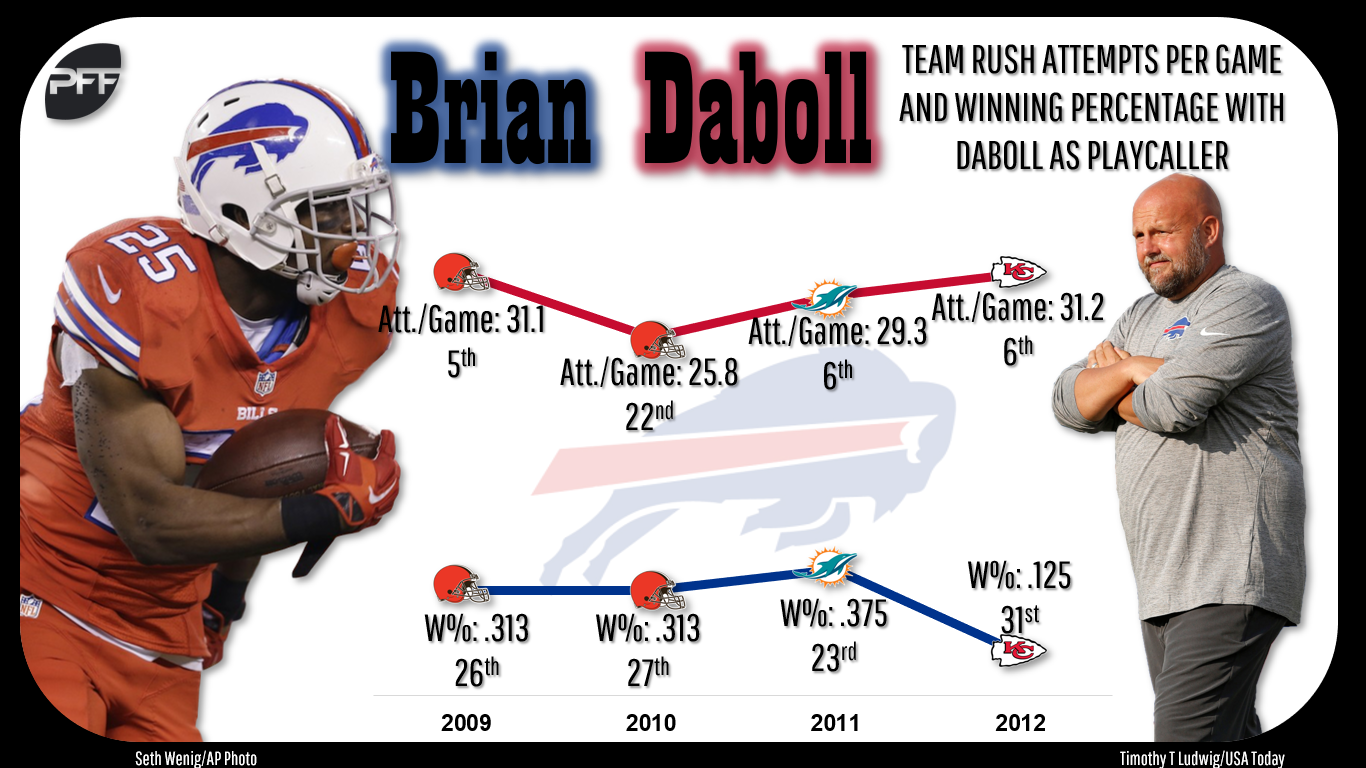 Daboll’s teams have ranked top-six in rushing attempts in three of four seasons as an NFL offensive coordinator, despite a career .281 win percentage on those teams. Throughout his career, his teams passed on 51.8 percent of plays, which easily ranks lowest among all active playcallers. While quarterback talent was poor on each of these teams, I think it’s safe to assume Buffalo will again be one of the league’s most run-heavy teams this year (they ranked second-lowest in pass percentage last year). However, this doesn’t necessarily mean improved volume for LeSean McCoy. He was targeted 77 times last year, while Daboll’s RB1 has only once been targeted more than 55 times in a season (though, this was Peyton Hillis’ famed 2010 season). Keep in mind, in PPR leagues, a target is worth 2.74 times as much as a carry for fantasy running backs.

On surface level (based on our chart), we might expect a decline in usage for Greg Olsen, but I don’t see that being the case. Shula’s TE1 numbers are heavily skewed by the fact they he coached Olsen for all five of his qualifying seasons. Turner, meanwhile, has also been one of the league’s most favorable offensive coaches for TE1s. Throughout his career, his TE1s have averaged 10.7 expected fantasy points per game, which ranks third-best among active playcallers.

There’s been much debate over Christian McCaffrey’s potential as a bell-cow running back in Year 2. I do firmly think this is within the range of his possibilities, and Turner’s career running back usage supports this notion. 45.0 percent of Turner’s total expected touchdowns (second-most among active playcallers) and 38.0 percent of his total expected fantasy points (third-most) have gone to running backs throughout his career.

With Nagy now calling plays for the Bears, it’s hard to reconcile his small coaching sample to look for a clear fantasy takeaway. Nagy has spent just one year an NFL offensive coordinator and has only called a handful of games throughout his career. It’s likely the Bears’ 2018 offense mirrors Andy Reid’s Chiefs, considering Nagy spent 10 years working under Reid. This could mean, like with Reid’s offenses, bell-cow usage for the RB1, heavy involvement from the TE1, and less usage for the wide receivers. Regarding the first point, Jordan Howard has been hyped up as an every-down workhorse for the Bears all offseason. This would mirror Nagy’s usage of Kareem Hunt last season. Excluding Week 17, Hunt averaged 31.3 expected fantasy points per game in the four regular season games Nagy called plays but only 13.5 expected fantasy points per game with Reid as the offensive playcaller. That said, I think the main takeaway for the Bears is improved pace of play and more pass attempts. Chicago ran the second-fewest plays and passed on only 54.6 percent of their plays (eighth-fewest) last season, despite trailing on 53.4 percent of their offensive plays (eighth-most).

With Haley, it’s hard to divorce his coaching history from the all-star cast he had in Pittsburgh. At the very least, he should be a marked improvement from Jackson, who has ranked bottom-two in points scored in each of the past two years. The chart above is an obvious representation of that, with each position showing up in green.

Demaryius Thomas and Emmanuel Sanders both rank top-10 in targets over the past four seasons. Given Musgrave’s history as an offensive coordinator, there should be little reason to assume Thomas and Sanders won’t continue to rank highly in target market share. Musgrave’s WR3s average a lowly 2.7 expected fantasy points per game and his TE1s average only 7.4 expected fantasy points per game (second-lowest), which means it might be worth pumping the breaks on rookie Courtland Sutton and tight end Jeff Heuerman.

In each of Chudzinski’s six full seasons as an offensive playcaller, we’ve seen a tight end finish among his top-two receivers in targets. On surface level, this might imply a downgrade for TE1 Jack Doyle, who has lapped Eric Ebron in preseason usage this year. However, in actuality, this might be an upgrade for Doyle. Reich’s TE1s have averaged 2.0 more expected fantasy points per game than Chudzinski's throughout their respective careers. Among active playcallers, his TE1s rank first in expected fantasy points per game (12.1) and first in percentage of team expected fantasy points. Still, this should be taken with a grain of salt, considering Reich has never called plays at the NFL level.

With DeFilippo we only have a one-year sample to work with (he was an offensive coordinator with the Browns in 2015) and he only spent two seasons under Doug Pederson, so it's not a given his offense mirrors the Super Bowl champion Eagles. I suppose the main takeaway is that he is not Pat Shurmur and we shouldn’t assume Dalvin Cook’s usage will be identical to what it was last season. (More on this in the next paragraph.)

Shurmur's RB1s have averaged a whopping 3.5 more expected fantasy points per game than McAdoo's throughout their respective careers. Shurmur ranks behind only Andy Reid in RB1 expected fantasy point market share. Steven Jackson, Trent Richardson, and LeSean McCoy averaged a combined 309.4 carries and 62.8 targets per year with Shurmur as their offensive coordinator or head coach. For perspective, that’s 372.2 total opportunities, a number only Le’Veon Bell bested last season. After selecting Saquon Barkley with the No. 2 overall pick in the 2018 draft, I think it’s safe to assume he sees a high-end RB1 workload in Year 1.

With Bates (one season as an offensive coordinator) replacing Morton (one season as an offensive coordinator), there isn’t much to go on based on historical usage. I will say, I think Morton’s departure is a negative for Robby Anderson, who drew 114 targets last year. Per this article, Morton’s ousting was in part due to the fact that, “The skill players on offense felt he only schemed for Anderson and everyone else was a checkdown option.” I think it’s safe to assume Bates spreads the ball around a bit more this year.

There isn’t much to go on with Fichtner now calling plays for the Steelers. He has zero career seasons as an offensive coordinator or playcaller but has spent 12 consecutive seasons in Pittsburgh. I suspect his offense won’t look much difference than Haley’s and that’s basically what he’s said all offseason.

While Brian Daboll is our most run-heavy active playcaller (48.2 percent), either of Bevell (47.2 percent) or Brian Schottenheimer (45.9 percent) would have ranked directly above him. Obviously, we should expect Seattle to be just as run-heavy as they were throughout Bevell’s tenure. Schottenherimer's WR1s average only 11.4 expected fantasy points per game throughout his career, which ranks tied for last among active playcallers (and tied with Bevell throughout his career). Unfortunately, this might mean Doug Baldwin will have to continue relying on hyper-efficiency (rather than raw volume) for fantasy production.

LaFleur has never called plays at the NFL level but he has spent time with two of the league’s brightest offensive minds in Kyle Shanahan and Sean McVay. It’s hard to say what LaFleur’s arrival means for the offense this year but, at the very least, we should expect things to be more hospitable for the passing game. Last year, Robiskie’s offense ranked a lowly 25th in plays per game and 26th in pass percentage. While that might be bad news for Derrick Henry’s rushing volume, it should bolster the fantasy potential of everyone else. Though, I think LaFleur’s arrival is especially beneficial for Marcus Mariota. Over the past three seasons, Mariota averages a 115.8 passer rating on play-action but only 89.2 on non-play-action passes. This was the second-greatest differential within our sample. LaFleur was OC of the Rams last year, who ranked third in play-action passes and first in percentage of passes coming on play-action last year. Keep in mind, Mariota was already one of our top positive regression candidates heading into the year.