You’ve made it all the way to Week 16, and the thought of benching your regular starting fantasy football quarterback for a streaming option in the title round sounds absurd. Before dismissing such a notion, though, consider that rookies accounted for three of Sunday’s top-seven fantasy QBs and four of the top-12. Other quarterbacks like Mitchell Trubisky, Josh Johnson, Nick Mullens, and Derek Carr were all serviceable fantasy starters in the semifinal round.

Meanwhile, the likes of Tom Brady, Aaron Rodgers, and Andrew Luck all failed to crack the top-15, sending hordes of fantasy owners into the offseason wondering what happened. You know it’s a weird NFL week when not one quarterback throws more than two touchdowns, and only two eclipse 300 passing yards. Most weeks, at least half of the top-10 fantasy QBs rack up 300 yards and/or three-plus TDs.

Don’t bank on another weekend like that. And if your regular starter faces a tough matchup or some other questions marks, there are other worthy starting options out there.

Let’s take a look back at Week 15’s streaming picks. As always, consult our staff rankings and ask away on Twitter before doing anything crazy.

Notes: Trubisky isn’t quite the gunslinger he was earlier in the season, although he finds other ways to get the job done. … While Jackson’s rushing ability continues to provide a high floor, I’ll be fading him against a Chargers pass defense that has been downright stingy of late. … Prescott picked a bad time to turn in a clunker for the first time in months. … Allen’s mobility and fearless aggressiveness in the vertical passing game are two elements that make him downright fun to watch. … Yet again, Carr faced a constant stream of pressure behind the Raiders’ replacement-level OL, yet managed to avoid throwing an interception for the ninth straight game. Somewhat quietly, Carr is posting career-bests in completion percentage (68.3) and yards per attempt (7.5). … Mullens turned in another solid grade and is averaging a healthy 292 passing yards in six starts.

Let’s break down why these are again the most attractive options for QB streaming for Week 16 who are either widely available, on your bench, or priced cheap in daily formats.

(I’m starting these guys over higher owned options like Jared Goff and Aaron Rodgers this week.)

For one reason or another, Trubisky threw only one deep pass against Green Bay on Sunday even though he faced pressure on only eight of his 31 dropbacks. That’s in stark contrast to what we have seen from Trubisky throughout the season, as he entered the weekend ranked second in percentage of targets attempted 20 yards or more downfield (18.2%). Still, the second-year pro was efficient despite minimal help from the run game as he completed 20-of-28 passes, including three drops and a batted pass.

The case for going back to the well with Trubisky this week is simple: San Francisco is graded dead-last in coverage and 26th in fantasy points allowed to QBs this season. If you ignore a Week 14 bout with Case Keenum, who hasn’t thrown more than two touchdowns in a game since the opener, four straight QBs have posted 19-plus fantasy points against the 49ers.

I know, I know. Last week was a rough one for Prescott and the Cowboys offense in a shutout loss to Indianapolis. The Cowboys’ banged-up offensive line was a liability, although for his part, Prescott was off target on a number of intermediate and downfield throws. Understandably, those who roll with Prescott in their fantasy championship may not go into the weekend with a warm and tingling feeling about it.

Before Sunday, however, Prescott was fantasy’s No. 4 QB going back to Week 6. Given a sample size of exactly half a season, last week’s showing is certainly the outlier. Even if Zack Martin isn’t quite ready to return from his knee injury, the Cowboys bring a healthy implied total of 27 points into this week’s tilt with Tampa Bay, according to Las Vegas oddsmakers. The Buccaneers rank 31st in pass-rush grade, 27th in coverage grade, and 29th in fantasy points allowed to QBs.

(I’m starting these guys over higher owned options like Tom Brady and Kirk Cousins this week.)

It wasn’t the cleanest of performances in Denver, but Mayfield dialed it up after halftime and kept the Browns’ playoff hopes alive with a key road win. The rookie mixed in ugly errors, such as his red-zone interception at the end of the first half, with pretty throws like the corner-route TD on the Browns’ opening drive. Mayfield’s spotty accuracy – Sunday marked his lowest completion percentage since Week 6 – was exacerbated by Cleveland’s spotty blocking up front. Still, he stayed aggressive and pushed the ball downfield on 22.6% of his dropbacks, although he completed only 1-of-7 attempts. 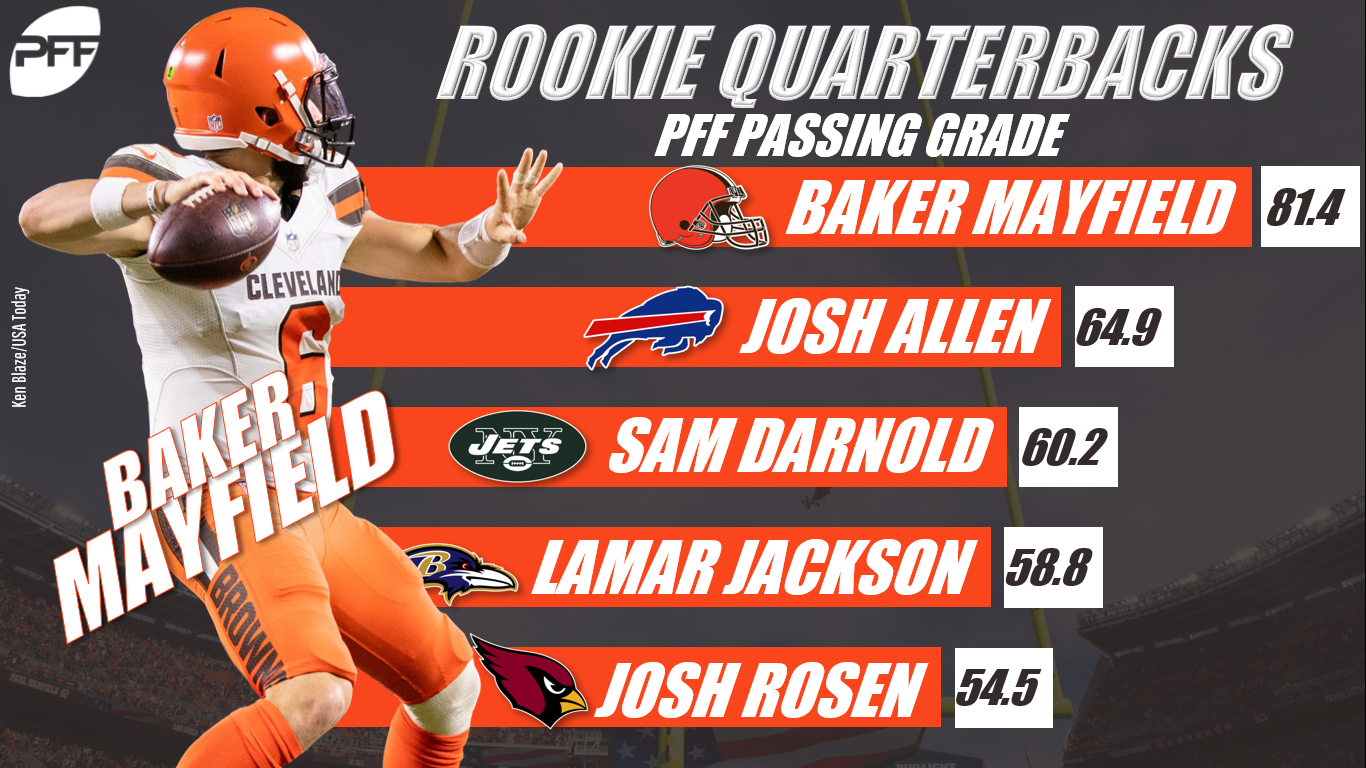 The good news is that this week’s opponent, Cincinnati, has allowed the third-most fantasy points to opposing QBs this season and owns PFF’s No. 28 pass-coverage grade. These teams already faced each other in Cincinnati a few weeks ago, and Mayfield went off for four touchdowns in that matchup. This time around, the Browns carry a healthy implied total of 27 points in their own building. Mayfield isn’t just PFF’s highest-graded rookie passer this season, he’s also graded out higher than the likes of Matthew Stafford, Ben Roethlisberger, and Cam Newton.

Allen has put up RB1 numbers since Week 12, displaying the kind of high fantasy floor we all covet in a running quarterback. Not even Lamar Jackson can touch Allen’s rushing production in that span, with those two leading all QBs in fantasy points per dropback, followed by fellow athletes Josh Johnson and Russell Wilson. While Allen has plenty of warts to smooth out as an NFL passer – he is completing just 52.2% of his passes with more yards per carry (6.7) than per attempt (6.5) – the formula for success has revolved around ample protection and the vertical passing game.

The Bills’ O-line allowed just one hit against Detroit, which is notable because this week’s opponent, New England, owns PFF’s fifth-worst pass rush grade. It’s also notable given that Allen’s passer rating jumps 46.8 points when kept clean compared to when pressured. When he’s not tucking and running, Allen continues to take shots downfield, completing a league-high four deep attempts (20-plus yards) on Sunday, which accounted for 30.8% of his dropbacks. On the season, Allen leads the NFL in percentage of deep targets (21.3), more than four percentage points ahead of the next-closest QB.

While Carson Wentz very much remains the Eagles’ franchise quarterback, a healthy Foles has a knack for doing several things that a banged-up Wentz struggles with. Namely, Foles takes more shots downfield, converts more third downs, and directs more passes to his top wideout. Wentz ranks 20th in deep throw percentage (11.2) this season, whereas Foles completed 3-of-5 deep attempts on Sunday night, continuing what he showed during last season’s Super Bowl run. Alshon Jeffery was the beneficiary against the Rams with a season-high 160 yards on eight catches, his highest catch total since Week 6. Zach Ertz, on the other hand, was held to 22 yards on three grabs.

On paper, Houston is a less-than-ideal matchup, which perhaps explains Foles’ minimum $6k salary on FanDuel. Don’t forget, the Eagles notched three rushing scores on Sunday night, whereas Wentz still ranks among the league leaders with 13 TDs on throws into the end zone. For those in 2QB leagues already set at the quarterback position, consider stacking Foles and Jeffery in a DFS lineup or two. Jeffery scored three times in the NFC Championship and Super Bowl while catching passes from Foles. The Eagles have an implied total of 23 points playing at home as a pick ‘em this week.

One can’t help but wonder where Darnold might be in his development if the Jets had another playmaker or three. Rather than getting a boost by the occasional big play, Darnold is often asked to execute play after play and put together sustained drives. But on Sunday, he posted the league’s top PFF passing grade as everything seemed to come together. Even though he and Robby Anderson didn’t connect on any deep passes, the threat of Anderson’s speed kept Houston’s secondary honest. 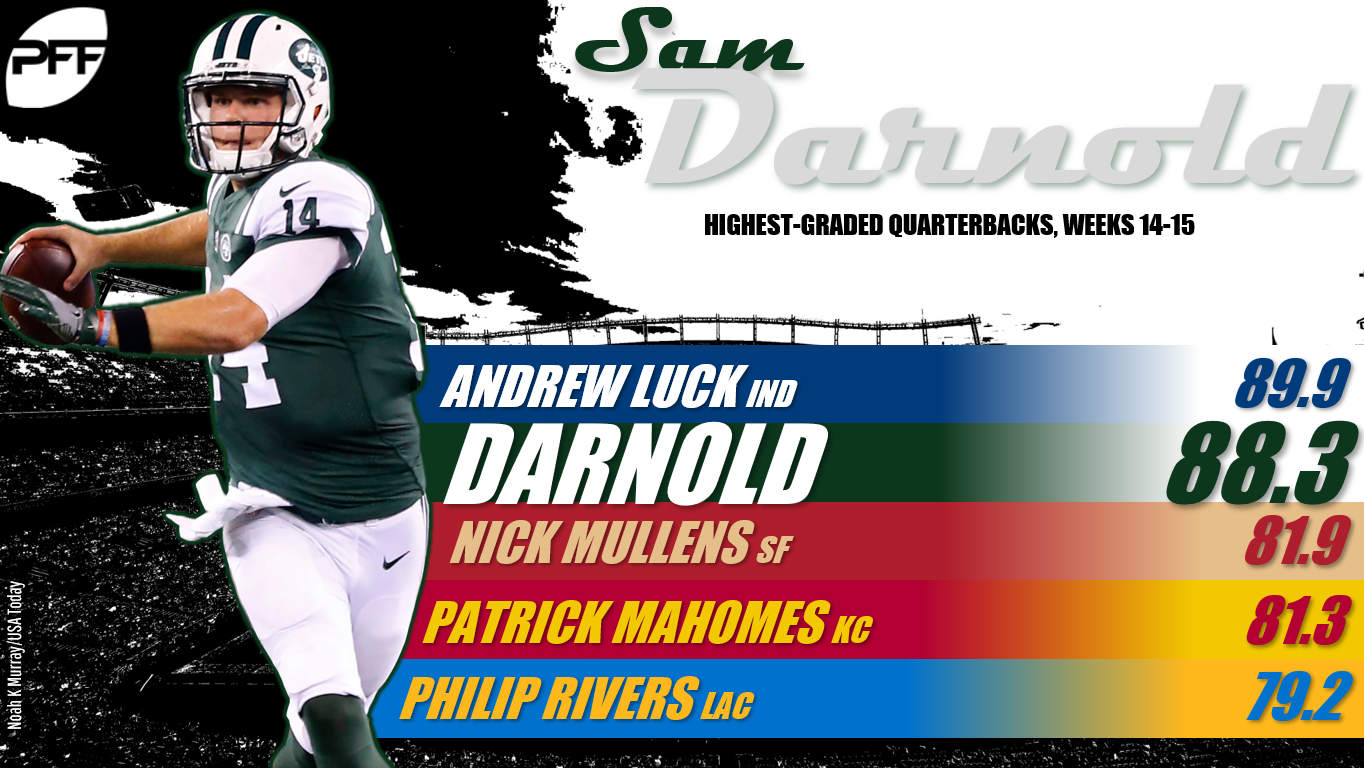 In fact, since Week 14, Darnold has posted a 93.7 passer rating to go with 45 rushing yards. He has also made strides throwing under pressure of late. Also on Sunday, Darnold had just one turnover-worthy throw while completing 8-of-11 passes at the intermediate level. This week, he’ll face a Green Bay pass defense that has shown some cracks of late. The Packers have allowed 18 or more fantasy points to four of the last five QBs they’ve faced, with Josh Rosen the only exception.