For those who are still alive in the fantasy playoffs entering Week 15 and looking for waiver and streaming options at quarterback, boy did you pick a good time to come across this column.

Week 14 was yet another stellar one for streaming quarterbacks, who comprised three of the top-five fantasy performances on Sunday and seven of the top-12 overall. Not to get right to the denouement, but that’s merely been par for the course throughout the season. Nearly every single Tuesday in this space, we’ve uncovered three or more start-worthy QB streamers who weren’t ranked as such going into that week’s game – even while missing on guys like Ryan Tannehill (QB4) and Josh Johnson (QB7) on Sunday.

That’s not to knock rankings, it’s just the nature of the beast given that Aaron Rodgers hardly scratches the top-12 these days. When asked on Twitter last week if Dak Prescott (QB16 consensus ranking) was worth starting over Cam Newton (QB4), I made clear that my opinion was in the minority but that, yes, Prescott would absolutely be my pick.

That Prescott wound up as the week’s QB1 while Newton was QB24 may have been a shock for many folks, but hopefully not for those who read this piece every week.

Let’s take a look back at Week 14’s streaming picks. As always, consult our staff rankings and ask away on Twitter before doing anything crazy.

Notes: I ran back the same slate from Week 13, swapping only Allen for Derek Carr in the streaming picks. Allen still has a ways to go as a passer, but his dual-threat ability continues to reward fantasy owners. … Winston attempted a league-high eight deep passes on Sunday but only completed two of them, along with an interception. Still, he was a serviceable lineup option yet again. … Fantasy owners won’t want to hear it, but Mayfield was PFF’s top-graded passer on Sunday. In fact, he had a perfect passer rating for much of the first half as he completed a couple of 50-yard passes. Despite the disappointing fantasy showing, Mayfield remains one of the league’s highest-rated passers since Todd Haley and Hue Jackson were shown the door. … Mariota had been a player on the rise, but these types of dud performances still pop up far too often for a player expected to be a franchise quarterback. He was also pressured only 19% of the time on Sunday.

Let’s break down why these are again the most attractive options for QB streaming for Week 15 who are either widely available, on your bench, or priced cheap in daily formats.

There was a four-week stretch earlier this season during which Trubisky was our top streaming option and ultimately graduated into weekly must-start territory. Since Week 9, however, the results have been more miss than hit, not including some missed time due to injury. Against the Rams on Sunday night, Trubisky was in less than 25% of starting lineups on ESPN, and for good reason as he managed only 110 yards with three interceptions on 30 pass attempts. Even more troubling were his several off-target deep throws. 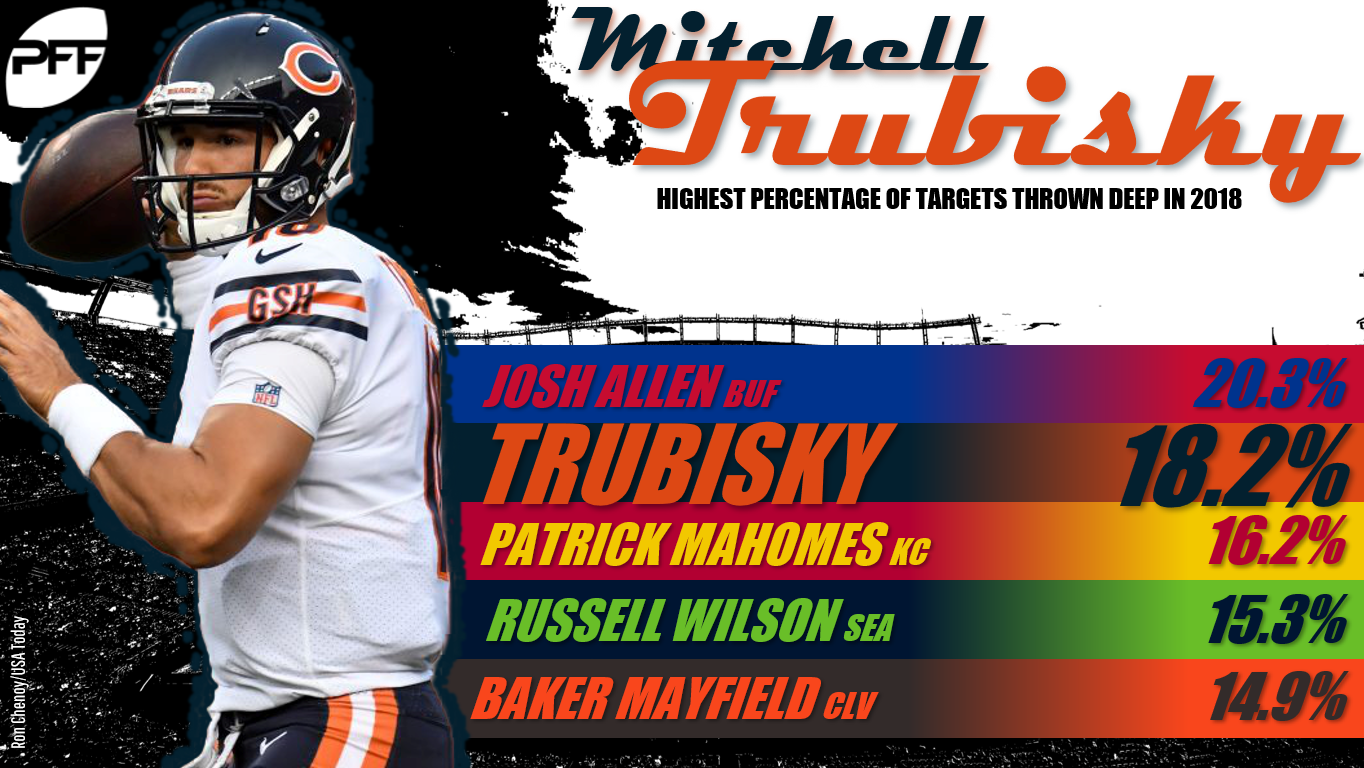 If you are a Trubisky owner who managed to stave off elimination, consider giving him a mulligan this week with the Bears carrying an implied total of 26 points. Trubisky has worked from a clean pocket at the sixth-best rate in the league this season (70.3), and that has allowed him to be aggressive working the ball downfield. Only Josh Allen is throwing it deep more often than Trubisky (18.2). Yes, the Packers have been mostly stout on the back end. However, they’ve only played six games against a current top-15 fantasy QB, and five of those QBs posted 18 or more fantasy points, including Matt Ryan this past weekend. Since Week 10, the only opposing QBs to come up short were Brock Osweiler and Josh Rosen.

Jackson’s best and worst traits were on display in crunch time of Sunday’s entertaining matchup with Kansas City. The bad: Jackson lost a fumble in Ravens’ territory late in the fourth quarter with the game tied, a result of poor pocket presence while the Chiefs were coming after him. The good: he tossed a couple of second-half touchdowns and ran for 71 yards, nearly pulling off an improbable upset against the Patrick Mahomes-led Chiefs in their building.

Regarding that pocket presence, Joe Flacco has been given a clean pocket 71.8% of the time this season, whereas Jackson is getting a clean pocket on only 64.4% of his dropbacks as he tends to hold the ball longer than a play is designed for. Still, despite his shortcoming, Jackson ranks as a top-seven fantasy QB during four games since taking over the starting gig. Assuming he keeps the job this week, Baltimore has yet another inviting matchup against a Tampa Bay defense that has allowed the fourth-most fantasy points to opposing quarterbacks, ranking 31st in PFF pass rush grade and 27th in coverage grade. The Ravens have a healthy implied total of 28 points.

Regular readers know that Prescott is an option I’ve endorsed weekly in this space over the past month. Going back to Week 6, he’s a top-four fantasy QB yet remains available in nearly half of leagues and benched in far too many, as well as a low-priced option on daily sites. This week’s opponent, the Colts, have tightened up defensively of late, albeit against a laughable string of opponents. Included in the list of QBs they’ve faced since Week 6: Sam Darnold, Derek Anderson, Derek Carr, Blake Bortles, Blaine Gabbert, Marcus Mariota, Ryan Tannehill, Cody Kessler. It’d be a challenge to hand-pick a less imposing slate than that.

Prescott repeatedly took shots downfield against Philly’s banged up secondary, posting a league-high eight deep attempts (20-plus yards) on Sunday, two of which resulted in touchdowns while at least a couple more were open, including his weekly overthrow to Michael Gallup. Prescott also posted a 149.1 passer rating on 21 dropbacks under pressure. All told, he posted the week’s top fantasy QB performance in throwing for 450-plus yards while completing 78% of his passes. New top target Amari Cooper hauled in 10-of-13 targets, turning nine of those into either a first down or touchdown en route to over 200 yards and three scores.

Allen is on a historic rushing pace with 335 yards over the past three games, which tops every running back in that span not named Saquon Barkley. And yet, that’s hardly the only reason to like him as a streaming option this week, despite his inefficiencies as a passer. The Lions rank middle of the pack in terms of fantasy success defending the pass; however, our analyst grades uncover flaws that opposing QBs have not exploited. Entering Week 14, Detroit owns PFF’s second-worst coverage grade and third-worst pass rush.

A nonexistent ground game along with a handful of dropped passes did not help Allen’s cause against the Jets, but those are both fixable areas. His decision-making is also coachable. He was pressured on a league-high 53.3% of his dropbacks on Sunday but managed only a 19.8 passer rating in those situations. Allen was accurate on 2-of-5 deep throws on Sunday, although two of those throws were intercepted. Still, it’s encouraging to see the rookie taking shots downfield, even if he’s not being rewarded. No QB has attempted deep passes more frequently than Allen (20.3). 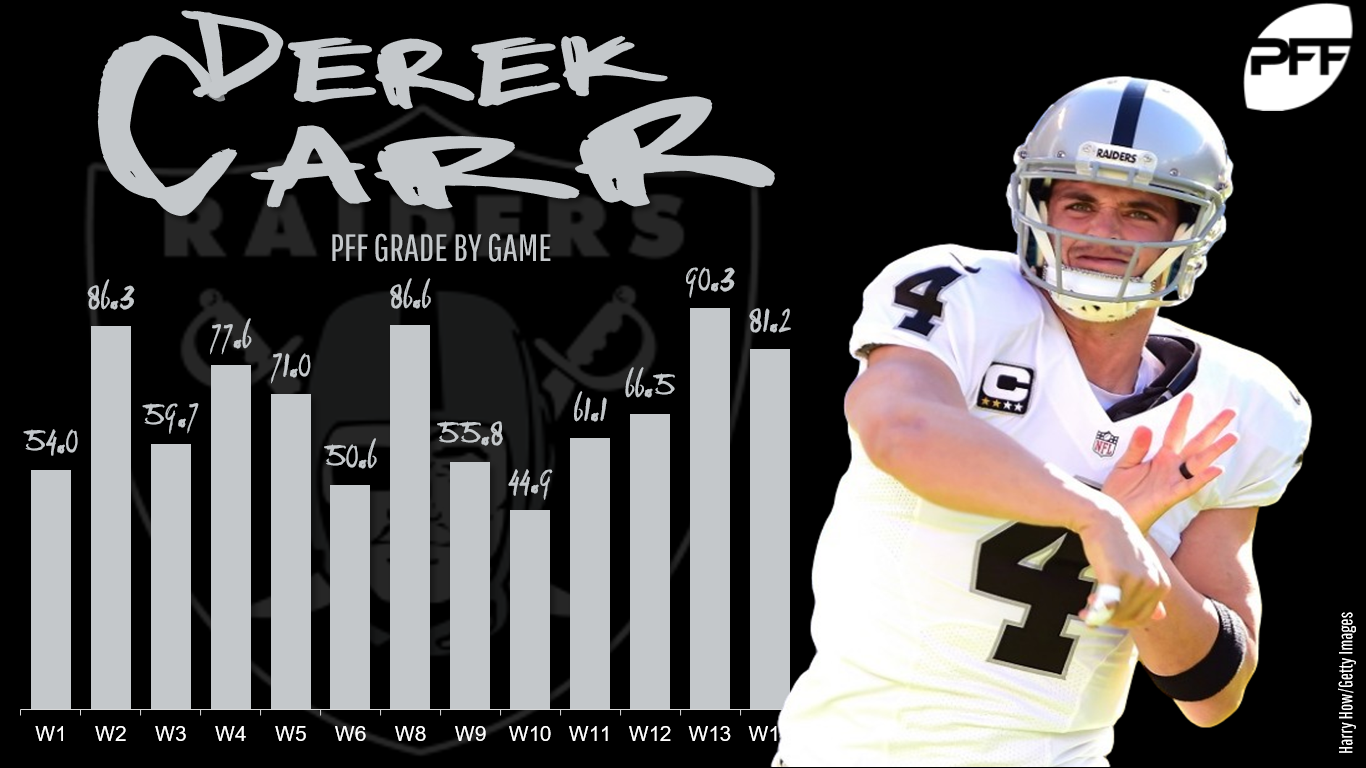 It’s a shame Carr doesn’t have the luxury of throwing to someone like Amari Cooper, who happens to be fantasy’s No. 2 WR since donning The Star. The good news for Carr this week is that he’ll get to face a Bengals defense giving up the second-most fantasy points to QBs, to go with PFF’s No. 28 coverage grade. I liked Carr’s streaming prospects last week, and he went on to deliver our fifth-best passing grade on Sunday, one week after posting the league’s top passing grade against Kansas City. Along with the matchup, there are several reasons to like him again this week.

After a slow start against Pittsburgh, Carr opened up and began challenging the Steelers vertically. As a result, he completed all three of his deep throws, eventually leading back-to-back touchdown drives in the fourth quarter. Carr did not force any turnover-worthy throws, as he completed 83% of his targeted attempts. Tight end Jared Cook was a factor yet again, posting his fourth straight game with either 100 yards or a touchdown.

Entering their Monday night game, the Seahawks had surrendered multiple passing scores in all six games since their bye, including four straight with 20-plus fantasy points allowed to quarterbacks. As is often the case, the numbers dip further when not playing at CenturyLink Field. Seattle owns our fifth-worst pass-rush grade on the season, and that’s an area Mullens can exploit.

Since coming onto the scene in Week 9, Mullens is a top-20 fantasy QB with 17.6 PPG. He’s worked from a clean pocket 69.1% of the time in that span, the ninth-best rate in the league. When kept clean, he sports a 106.5 passer rating to go while being accurate on 79.8% of his throws. Against pressure, those numbers drop to a 52.4 passer rating and a 71.4 adjusted completion rate. If the 49ers learned anything in their win over Denver, it was 1) get the ball to George Kittle early and often and 2) don’t let off the gas in the second half.