As we head into Week 14 of the fantasy football season, hopefully you have a solid every-week starter at quarterback. But if you don’t, this piece looks at streaming quarterback options.

Fantasy football playoff season is not the time to get cute with your lineup, and the Week 14 slate is no different. But as I discussed in this space last week, the penalty for not weighing all options is an early exit … and a lot of second guessing.

“Start your studs” is really more like “know your studs.” For one reason or another, Aaron Rodgers (QB11) and Tom Brady (QB14) are not their typical stud selves this season. On the other hand, Jared Goff has pretty much been a stud all year. If you want to continue riding a conventional option this week like Brady at Miami or Goff at Chicago, I won’t argue with you. Just be sure and do your due diligence by weighing the opportunity cost of passing up a potentially higher ceiling streaming option.

What opportunity cost, you ask? Well, just look at the chart below from Week 13, and that’s even with a couple of misses like Josh Allen (QB2) and Nick Mullens (QB5). As always, check with our staff’s consensus rankings later in the week before doing anything crazy like start

(*Monday's grades not yet finalized)

Notes: From week to week in this space, you’ll typically find a good bit of variance in my streaming recommendations, due in part to matchups and other factors. With the exception of Carr, we’re going to run it back with all of the players from this chart, and it’s not just because of last week’s success.

Let’s break down why these are again the most attractive options for QB streaming for Week 14 who are either widely available, on your bench, or priced cheap in daily formats.

Tampa Bay opened the week with an implied total of 25 points against a Saints defense that has yielded the fourth-most fantasy points to quarterbacks, although they have tightened up in recent weeks. Winston is back to playing inspired football, boasting a 119.1 passer rating in three games since his Week 8 benching. He has completed 72.6% of his passes with six TDs and one interception to go with another 88 yards on the ground (5.2 YPC) in that span, ranking sixth in fantasy scoring despite coming off the bench in one of those games.

Winston took only two shots downfield in Sunday’s win over Carolina, but he also racked up 48 yards on five runs and had just one turnover-worthy play. The version of Winston that avoids costly mistakes is the version the Bucs thought they were getting with the first overall pick, and lately, that’s the version we’ve seen. Even with Mike Evans having a down game and no DeSean Jackson, Winston still found plenty of success when targeting Chris Godwin (5-101-1) and Adam Humphries (7-61-1).

Jackson has thrown for all of two touchdowns during his three starts. However, the Ravens happen to have won all three of those games, with Jackson finishing 13th, ninth, and 10th in fantasy scoring. Even as a limited passer, Jackson has remained quite productive in fantasy, although he’s also been responsible for four turnovers and some untimely misfires. Ultimately, with Jackson at the helm, the Ravens are able to dictate game flow, and defenses are yet to find an answer. Three games represents a small sample size, for sure, but we also can’t ignore that he is on a 16-game pace to rush for over 1,400 yards and 11 TDs.

The risk in endorsing Jackson yet again is that Joe Flacco’s possible return, and role, is still very much up in the air. This week’s opponent, Kansas City, has allowed the fifth-most fantasy points to quarterbacks this season. Jared Goff and Derek Carr have combined to toss seven passing scores against the Chiefs over their past two outings. Even if Jackson isn’t quite mature enough yet to exploit a weak secondary, his brand of ball-control offense is a good recipe to keep Patrick Mahomes on the sideline as much as possible. 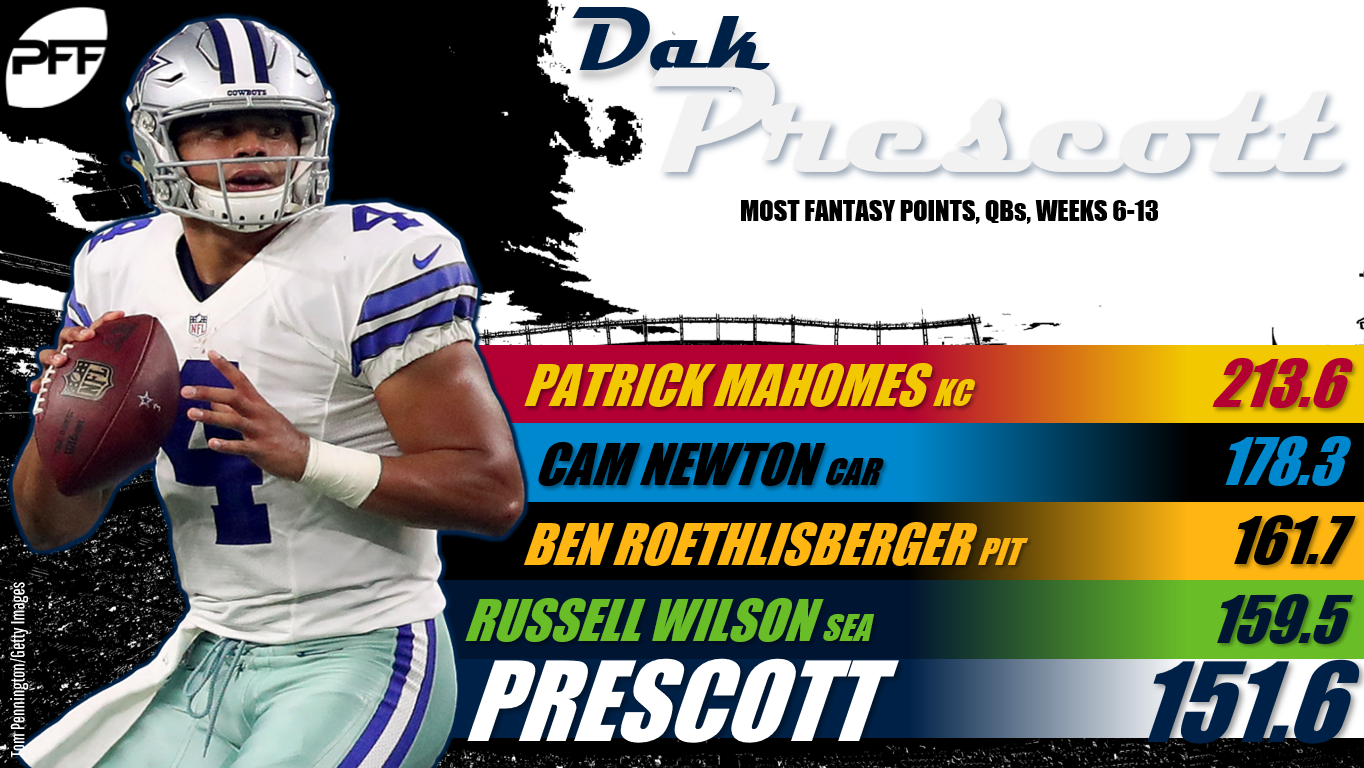 Going back to Week 6, Prescott is fantasy’s No. 5 QB. That’s a span of seven games — almost half a season — during which he’s outperformed the likes of Andrew Luck, Drew Brees, Aaron Rodgers, Tom Brady, and others. And yet, he remains unowned in approximately half of leagues while being parked on the bench in four out of five last Thursday despite an inviting matchup. Granted, his bottom-line fantasy production was only so-so even though he completed 24-of-27 aimed passes. It also marked only the second time in seven games that he failed to notch a rushing score.

Still, he came out with an upset victory by throwing balls underneath and letting his receivers do the work. He did also complete one perfectly thrown deep ball, although he missed a wide-open Michael Gallup on a deep stop-and-go that should have been an easy touchdown. Next up, he’ll face an Eagles defense on a short week, while Dallas will have had extra time to prepare. The Eagles entered their Monday night game with a decimated secondary and owners of PFF’s sixth-worst coverage grade this season. Dallas just beat the same Saints team that handed Philly a 48-7 whooping a few short weeks ago.

It was a rough start for Mayfield in the first half against Houston. He tossed three interceptions, one of which was returned the other way for a score as Cleveland went into the locker room trailing 23-0 at halftime. However, the offensive line stepped up in the second half – no easy task against Houston’s pass rush – and the rookie capitalized on that time in the pocket, although he ultimately fell a bit short.

One particularly encouraging sign is that Mayfield had a league-high five completions on deep passes targeted 20-plus yards downfield (out of seven attempts). Sunday’s outing marked the first time in six games that Mayfield failed to throw for multiple scores, although he did post a career-high 397 passing yards. If the O-line picks up where it left off, look for him to continue taking shots against a Panthers defense that ranks 27th in fantasy points allowed to quarterbacks and 25th in PFF coverage grade.

On paper, this week’s matchup isn’t all that appealing against a Jaguars pass defense that has shown improvement over the past two weeks. Still, the last four quarterbacks Jacksonville has faced have all eclipsed 20 fantasy points, and Mariota is averaging 21 fantasy points over the last five games that he’s started and finished. The fourth-year pro continues to use his mobility to make plays both as a runner and buying more time to work the ball downfield.

It was a rough day for the Titans’ O-line against the Jets Sunday, yet Mariota hung in there and eventually came through with another game-winning touchdown to Corey Davis in the waning moments. Mariota kept that drive alive with a dazzling scramble, evading a couple of would-be tacklers. He was effective with the deep ball, completing 3-of-6 attempts for 119 yards. Since Week 7, Mariota sports a league-best 142.4 passer rating on deep throws.

The Bills didn’t put up many points against Miami, and their offensive performance wasn’t exactly one to try and repeat considering most of their production came on busted plays, scramble drills and Allen keepers. Then again, that’s also what makes the rookie such an appealing fantasy prospect. Among QBs, only Cam Newton has run for more yards than Allen, who has played four fewer games. We talk often on this site about the fantasy cheat code that is mobile quarterbacks, and Allen certainly is forcing his way into that conversation.

While that’s not the only appealing part of Allen’s game, it does tend to create additional opportunities downfield when the play breaks down. Allen attempted far and away a league-high 13 deep passes in Week 13, albeit with mixed results. He was accurate on four of those throws, which resulted in two touchdowns and a drop, while two others were picked off. Still, we’re certainly not talking about a game manager here, as downfield passes accounted for 39.4% of his dropbacks on Sunday, and a league-high 21.4% among all qualified quarterbacks this season.