It’s Week 13 of the NFL season, and the stakes will only go up the rest of the way. For those leagues with multi-week playoff formats, Week 13 marks the start of fantasy football playoffs. Today we’re looking at quarterback streaming options.

With bye weeks now all wrapped up, naturally there won’t be many available streaming options cracking the top-12 of our weekly consensus quarterback rankings. Yet virtually every week, the top-12 ends up being dotted with names of QBs who were likely available in your league’s waiver wire.

This past weekend alone, five of the top-10 fantasy QBs wound up coming from the streaming ranks. Other names like Colt McCoy, Jeff Driskel, Ryan Tannehill, Chase Daniel, and Josh McCown all posted top-20 fantasy finishes as viable starters in 2QB or superflex formats. Perhaps you’ve grown weary of waiting for the real Aaron Rodgers (QB10) or Tom Brady (QB13) to emerge, or perhaps you’ve already moved on from your Week 1 starter like Matthew Stafford (QB18) or Carson Wentz (QB21).

Heck, this time last year, Alex Smith, Josh McCown, Blake Bortles and Jameis Winston all posted top-five finishes in Week 13. Look, no sane person is going to bench Drew Brees for Colt McCoy on account of matchup or Taysom Hill or any other peripheral reason. That’s why we offer consensus rankings, projection tools and a sea of research. However, this isn’t the time of year to get complacent and dismiss all available options, because your competition is out there scouring for an edge.

Notes: Mayfield is fantasy’s QB11 since Week 7 and continues to go unowned in more than half of fantasy leagues. … A capable streaming option more often than not this season, Dalton was placed on injured reserve Monday with torn ligaments in his thumb. … Jackson posting consecutive QB1 fantasy performances while learning the ropes in his first two pro starts should help illustrate why there’s been so much buzz over his dynasty stock. … Winston may just need to get himself benched once or twice a year to keep from derailing off the tracks. … Manning completed three deep passes (20-plus yards downfield) but the Giants inexplicably didn’t game plan for Odell Beckham Jr. to attack Philadelphia’s no-name secondary. Manning actually ranks ninth with 20 deep completions this season, albeit with only an 89.4 rating on those throws. … Mullens has already been announced as the 49ers starter for Week 13, but after Sunday’s performance, it’s fair to wonder why.

Below are the most attractive options for QB streaming for Week 13 who are either widely available, on your bench, or priced cheap in daily formats.

Despite shifting to a ball-control attack, Jackson has flourished as a fantasy quarterback thanks to his strengths as a runner. The read option isn’t the only tool in his belt, either, as he flashed ample accuracy on downfield throws (2-of-4) while also moving the chains with designed runs. Gus Edwards has been a productive complement in the zone running attack, going over 100 yards in each of Jackson’s two starts and helping to keep the offense in manageable down and distances.

Over the course of his two starts, Jackson ranks 12th in fantasy scoring despite throwing for only one touchdown, and he is third in fantasy points per dropback (0.76) behind Drew Brees and Patrick Mahomes. Jackson has also flashed a nice rapport with tight end Mark Andrews in particular. This week’s opponent, Atlanta, owns our No. 27 pass-rush grade on the season and has given up the second-most points to opposing QBs. The Falcons have surrendered three or more passing scores in seven of their last 10 games. 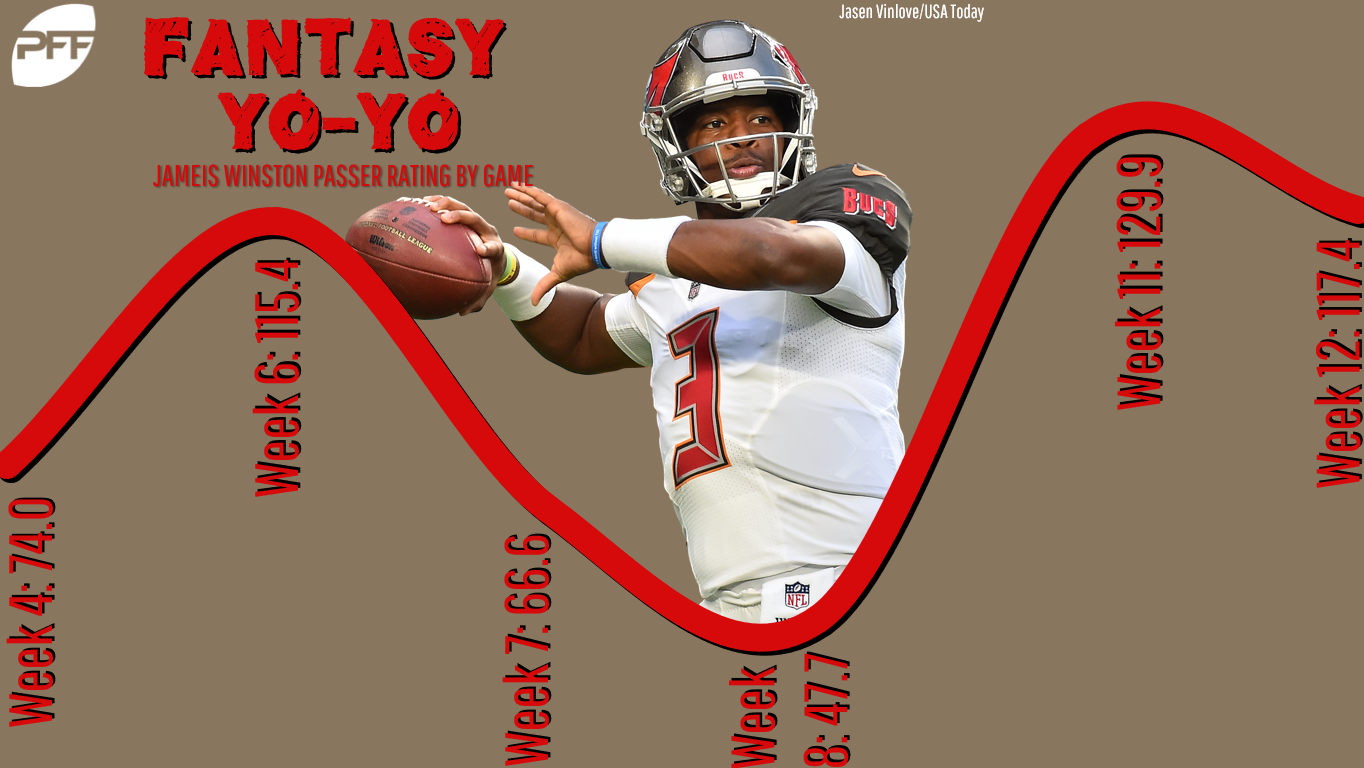 Winston has three games this season with a passer rating of 115.0 or better, and three games with a rating below 75.0. Coming off back-to-back solid outings and set to face a Panthers defense allowing the sixth-most fantasy points to QBs, Winston’s arrow is once again pointing up. Tampa Bay also carries a healthy implied total of 26 points according to Las Vegas oddsmakers.

In Sunday’s win over San Francisco, Winston completed at least 75% of his passes for the second straight game and avoided throwing an interception for the first time all year. An injury to starting RT Demar Dotson forced Leonard Wester into action, and he gave up a number of pressures that sent Winston into scramble mode. He was pressured on nearly half of his dropbacks (46.5%) but was 10-of-15 for 172 yards, two TDs, and a 145.0 passer rating.

About a month ago, I detailed Prescott’s steady rise in play ahead of Amari Cooper’s Cowboys’ debut in Week 9, but there’s no sense skirting the obvious when it comes to Prescott’s production of late. In four games since joining the Cowboys, Cooper is averaging six catches for 87 yards and has found the end zone three times, as he ranks eighth in PPR scoring in that span. Now armed with a bona fide No. 1 WR, Prescott ranks ninth in fantasy scoring among quarterbacks since Week 6. He’s also notched a rushing score in five of his last six games.

Up next is a New Orleans defense yielding the fourth-most fantasy points to opposing QBs, although the unit has been solid over its last three outings. Still, Prescott managed to throw for a season-high 289 yards on Thanksgiving despite not having LT Tyron Smith (stinger), and the team is hopeful he can return this week to protect Prescott’s blind side. Even without Smith, Cooper demonstrated his worth to Dallas’ offense by converting several key third downs against Washington, also using his precise route-running ability to break loose for a couple of long touchdowns. Those elements had been sorely lacking for Prescott in the early part of the season.

That’s now five straight games with multiple passing TDs for Mayfield, who has racked up 13 scores with only two picks and a 69.6% completion rate in that span. On Sunday, he absolutely dismantled the Bengals’ secondary with 258 yards, four TDs, and zero INTs on 19-of-26 passing. His fourth TD came with just under 13 minutes to play in the third quarter of a 35-7 game, as the Browns let off the gas pedal the rest of the way. Still, over his last two games, the rookie has managed to put up numbers matched only by Drew Brees in the Super Bowl era.

All of that said, this week’s matchup is far from ideal against a Texans defense that had held six straight opponents below 300 passing yards with no more than one touchdown through the air before Monday night. Mayfield completed 3-of-4 deep attempts against Cincinnati and isn’t shy about slinging the ball downfield, considering he is eighth in frequency of deep attempts (13.8%). Of course, protection is a big part of that equation. He was pressured on only 18.5% of his dropbacks against Cincinnati, whereas Houston owns PFF’s No. 7 pass-rush grade this season. 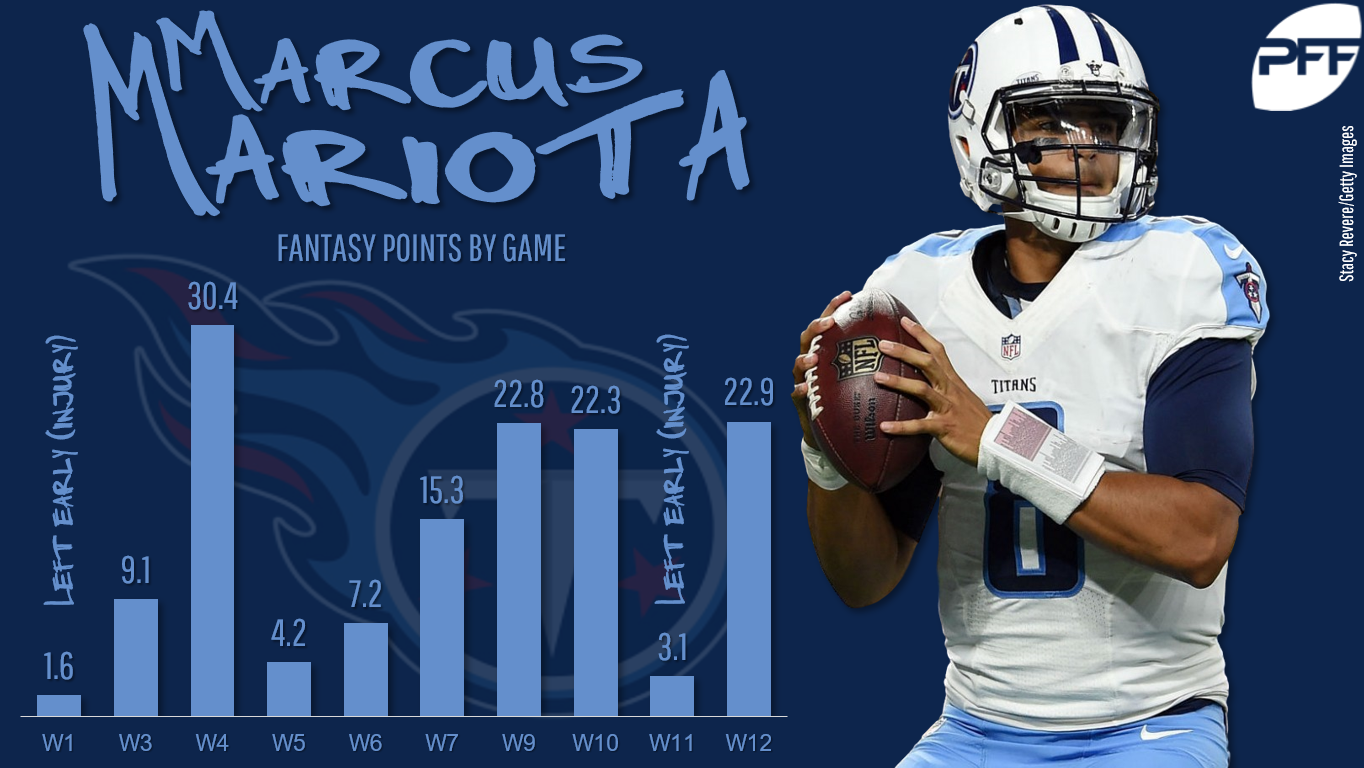 The Titans enter a short week set to host a Jets defense that has allowed multiple passing scores in seven of its past eight games. Tennessee opened as 9.5-point favorites with an implied total of 25 points, and a steadily improving quarterback. Excluding Week 11’s injury-shortened outing, Mariota has averaged 21 fantasy points over his past four complete games. In completing 22-of-23 passes for 303 yards with a couple of touchdowns and no interceptions on Monday night, Mariota became the first QB since the merger to post those kinds of numbers in a loss.

Sure, he still has a tendency to take too many sacks and not push the ball downfield. But for the most part, he is also taking what the defense gives him and not forcing turnovers (only six interceptions). In terms of weapons, he’s got a productive pass-catching back in Dion Lewis, a perimeter weapon on pace for 1,000 yards in Corey Davis, and a young athletic tight end in Jonnu Smith who has caught touchdowns in three of the last four games, including this beauty on Monday night. Of course, with Mariota the X-factor is his mobility, and he again ranks among the league’s top rushing QBs. Even when he scrambled 14 yards to pick up a key first down, Mariota kept his eyes downfield and only tucked the ball to run at the last moment.

The last time we saw the Chiefs, they were on the wrong end of that Monday night shootout with the Rams, in which they allowed 413 yards and four TDs through the air. While the Chiefs have made strides defensively this season, ultimately, they are giving up the fifth-most fantasy points to QBs this season. What’s more, in six road games they are yielding an average of 25 fantasy points to QBs, compared to only 15 PPG at home.

Oddsmakers opened this division rivalry matchup with a 55.5-point total, albeit with Kansas City expected to generate around five touchdowns toward that total. Still, expect Carr and company to air it out early and often to try and keep pace. Over the last two weeks, Carr has gone on the road and completed 4-of-10 deep throws for a 120.0 passer rating despite a motley crew of perimeter weapons.