Week 12 Fantasy football predictions: Nick Mullens is one of the week's QB streamers

It’s Week 12 of the NFL season, and for some leagues, that means the final week of the fantasy football regular season. For fantasy owners of Patrick Mahomes or Jared Goff, that means finding a lineup replacement for the final two byes on the schedule.

There’s no sense burying the lede here: Lamar Jackson is the top streaming option this week, and likely the rest of the way as a potential league winner. After all, we’re talking about a rookie who attempted only 19 passes without finding the end zone, and yet still finish as a top-10 fantasy QB in his starting debut.

Along with Jackson, Andy Dalton (QB6), Eli Manning (QB9), Derek Carr (QB12) and Tampa Bay’s backup (QB11) turned in viable fantasy performances in Week 11. Ultimately, I missed on those guys after managing to identify three or more start-worthy QB streamers in each of the previous four weeks.

Notes: If nothing else, Fitzpatrick will be perfect when he’s cast for one of those Snickers commercials where he turns into a completely different person when hungry. Come to think of it, can somebody find out what he’s been having for breakfast on game days lately? … Prescott and Rosen were serviceable, although none of the quarterbacks who eclipsed 20 fantasy points in Week 11 came from the streaming ranks. … Jackson’s impact on the Ravens’ offense was unique as advertised, and Baltimore came away with a much-needed win to snap a three-game slide and remain in the playoff hunt. … Bortles will apparently keep his starting job this weekend. Although he attempted only 18 passes against Pittsburgh, no quarterback on Sunday was pressured more frequently than Bortles (57.7% of dropbacks), who had a respectable 86.6 passer rating on those throws.

Below are the most attractive options for QB streaming for Week 12 who are either widely available, on your bench, or priced cheap in daily formats.

A frequent name in this space throughout the season, Dalton continues to remain widely available in fantasy leagues. Sure, Dalton has benefitted from a relatively plush schedule, but even when fading him this past weekend in a tough matchup against Baltimore, he still came through with a top-seven fantasy performance on Sunday despite another absence from A.J. Green. According to reports, Green has a shot to return in Week 12, and Dalton could certainly use his physicality after Bengals’ receivers struggled against Baltimore’s feisty corners.

With OT Cordy Glenn enduring a rough day in pass protection, Dalton picked his spots to be aggressive and wound up being accurate on 2-of-4 deep passes (20-plus yards downfield), including a touchdown. All told, it was Dalton’s second QB1 performance in his last three outings. Better yet, the Bengals have a healthy implied total of 25 points against a Cleveland franchise that Dalton tends to pick apart. In each of the last six meetings, he’s thrown multiple touchdowns with zero interceptions. 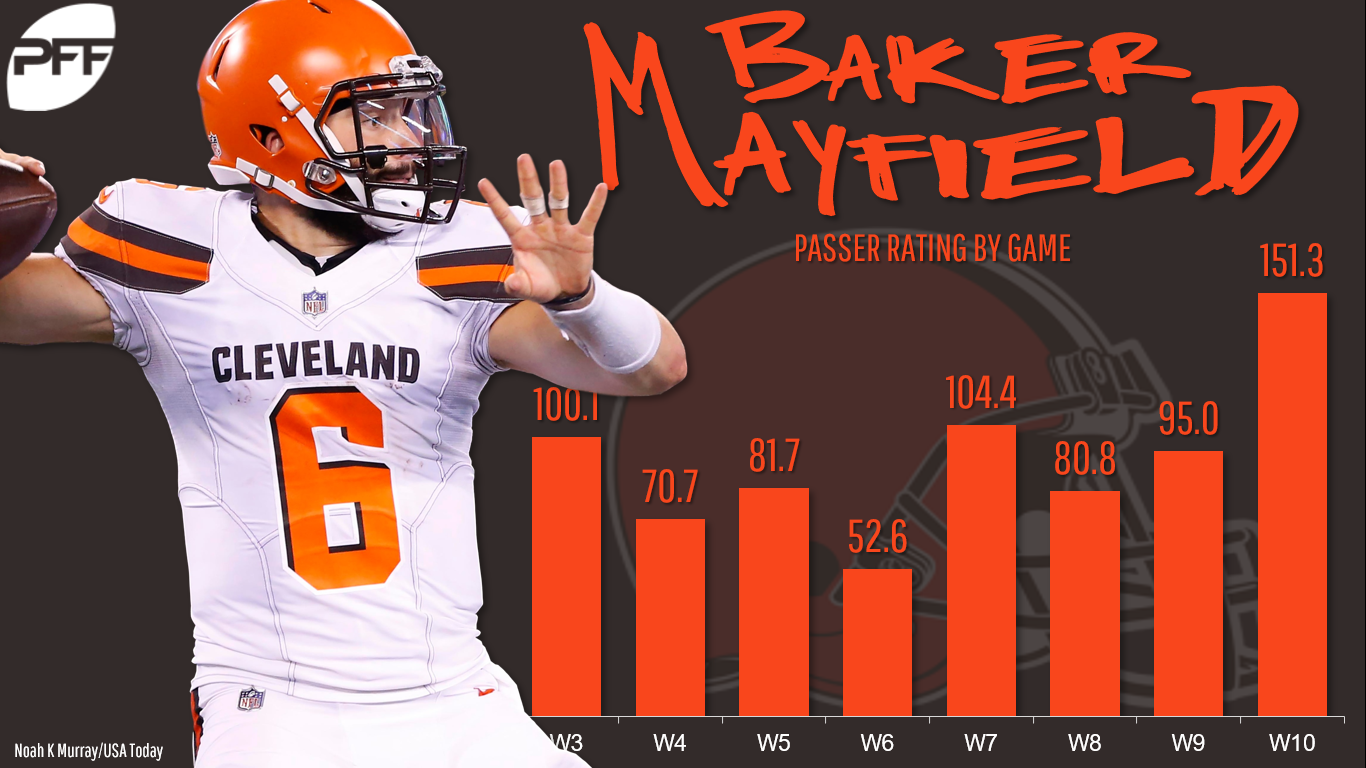 The last time we saw Mayfield, he woke up feeling dangerous, and then went out and put on a display against Atlanta with his fourth straight multi-touchdown game. Playing opposite Dalton in the Battle of Ohio with an extra week to prepare, the rookie has a good shot to extend that streak against a Bengals defense that has been burned of late. Cincinnati had given up 10 passing scores over its past three games before yielding 16 fantasy points to Lamar Jackson in his starting debut. For the season, Cincinnati is surrendering the second-most fantasy points to opposing passers.

Since his debut in Week 3, Mayfield ranks eighth in percentage of targets attempted downfield (13.7), although he found success with the short passing game against a Falcons defense that was generating pressure. Curiously, even with Nick Chubb commanding attention, the Browns have dialed up play-action only 23% of the time, with Mayfield’s completion percentage dipping 10 percentage points compared to no play-action. David Njoku has also been underutilized, totaling just 12 targets since Week 7.

Save for one ill-advised interception, Jackson was efficient, if unspectacular, in the passing game on Sunday. But the reason he carries so much streaming appeal as an upside QB1 in fantasy is his athleticism, as Jackson’s 27 rushing attempts marked the second-most ever by quarterback in an NFL game. What’s more, he terrorized Cincinnati at the mesh point on option plays, so much so that a guy named Gus Edwards capitalized on open running lanes to churn out 115 yards and a score on 17 carries. We’re talking about elite fantasy upside here, a la Michael Vick (2010) or Robert Griffin III (2012).

With Baltimore set to face the Raiders and their dead-last pass-rush grade and No. 29 coverage grade, Jackson has a good opportunity to build on his debut. While reports have surfaced that Joe Flacco has a chance to return in Week 12, it would be somewhat shocking at this point if John Harbaugh reinserted the struggling 33-year-old over Baltimore’s electrifying first-rounder. One final note: Jackson was pressured on 11-of-24 dropbacks. The interesting part there is that Flacco has worked from a clean pocket 71.8% of the time, the fourth-highest rate. With sufficient time to throw and improved decision-making, Jackson can start to scratch his ceiling.

If only there was a way to know which Tampa Bay quarterback was going to show up in a given week, “Bucs QB” would be the ultimate streaming weapon. Coming off the bench (again) for an inconsistent (again) Ryan Fitzpatrick, Winston came off the bench and led four straight touchdown drives, earning PFF’s fourth-best passing grade on Sunday. After Fitzpatrick was picked off three times taking shots into tight coverage, Winston was more economical in taking what the defense gave him, although the Giants did drop a couple of would-be interceptions.

With Winston already named the starter for Week 12, the streaming appeal is pretty simple: San Francisco owns our worst pass-coverage grade on the season and ranks 25th in fantasy points given up to opposing quarterbacks. Better yet, the Bucs opened as 3.5-point favorites with a 55-point game total. While Winston was wise to feed Mike Evans, who had a perfect passer rating when targeted, one area he needs to improve in is taking advantage of clean looks. Winston boasts only an 86.5 passer rating when kept clean despite facing pressure on only 29.7% of his dropbacks.

The Eagles just got annihilated by Drew Brees and company, as they now rank fifth-worst in both PFF coverage grade and fantasy points allowed to quarterbacks this season. The Eagles entered last week’s game minus three of their top opening-day starters in the secondary, only to lose three more starters to injury. None of the team’s three healthy CBs who finished the game were on the active roster to begin the season. That, my friends, is a problem.

On the other side of the coin, Philly’s front-seven remains one of the league’s stronger units, and you can bet the Eagles will focus on trying to bottle up Saquon Barkley while forcing Manning into mistakes. However, Manning hasn’t been all that generous of late, totaling five touchdowns with no interceptions over his last two outings. The resurgent veteran owns our No. 8 QB grade in that span to go with a 133.0 passer rating. Still, Las Vegas oddsmakers aren’t expecting the Giants to light up the scoreboard in this division rivalry (20-point implied total), so don’t go crazy with Manning exposure in DFS lineups. 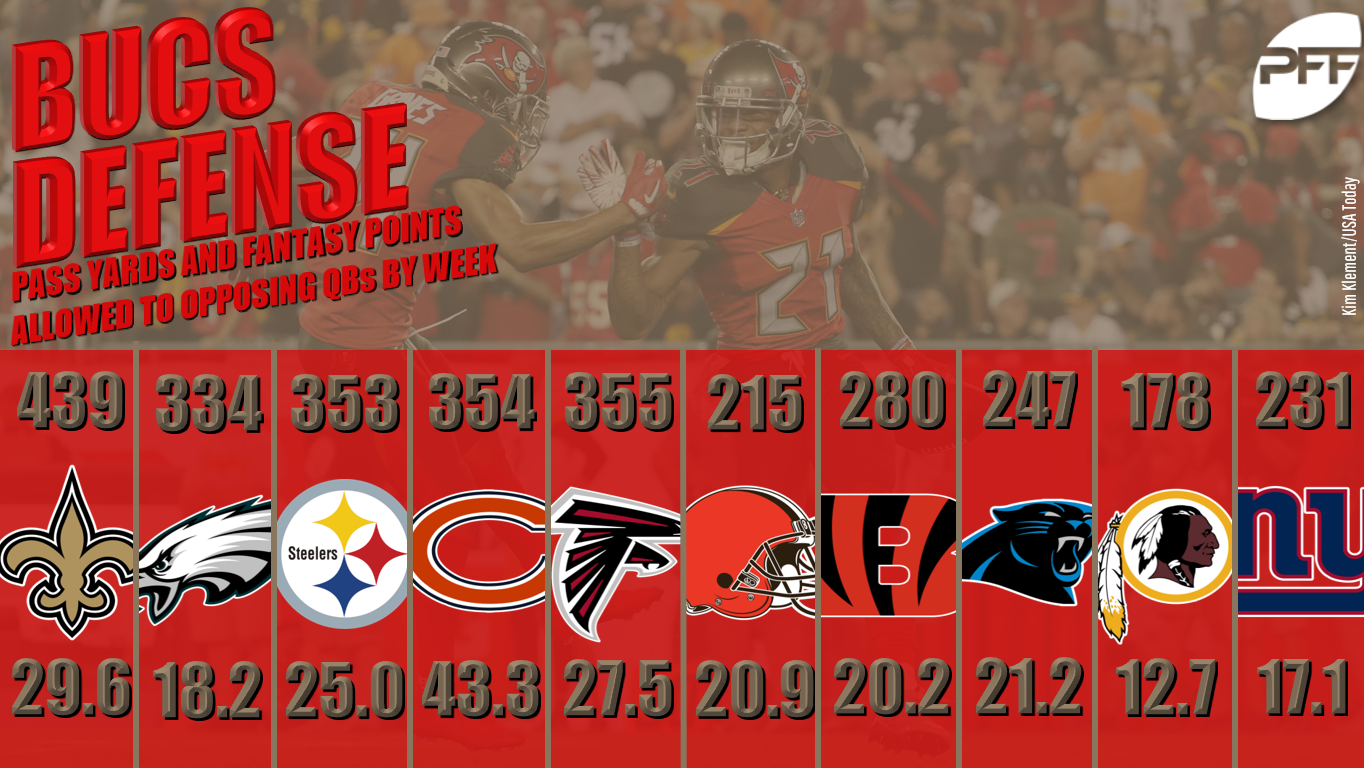 Mullens enters Week 12 with two weeks to prepare against a Tampa Bay defense that has been the league’s most generous to opposing fantasy QBs this season, ranking 31st in PFF pass-rush grade and 30th in coverage grade. While Mullens’ most recent start didn’t go quite as well as his NFL debut against Oakland in Week 9, he’s earned Kyle Shanahan’s endorsement as the 49ers’ starting QB for the foreseeable future. And yet, he’s priced as a bottom-dollar option on FanDuel, along with the Tyrod Taylors and Taylor Heinickes of the world.

With an implied team total of 26 points, Mullens is a viable option for 2QB leagues and those in need of a bye-week replacement for Mahomes or Goff. Mullens has some weapons, none better than tight end George Kittle and his after-catch ability. However, he hasn’t fully utilized speedster Marquise Goodwin, who has yet to draw more than five targets in a game this season. Of Mullens’ 61 attempts, only four have been targeted more than 20 yards downfield (6.6%), although he completed two of them.