Each week in this space, we’re taking a look back at Sunday’s games to find five of the most interesting or most important stats for fantasy football owners. With 14 of 15 games from NFL Week 12 in the books, here are the five stats you need to know:

1. Only twice in the history of the NFL (since sacks became a stat) has a quarterback recorded back-to-back games with at least 20 pass attempts, a passer rating of 140.0 or more, and zero sacks. Both of these instances have come in 2018, to Drew Brees (Weeks 10-11) and Baker Mayfield (Weeks 10-12). 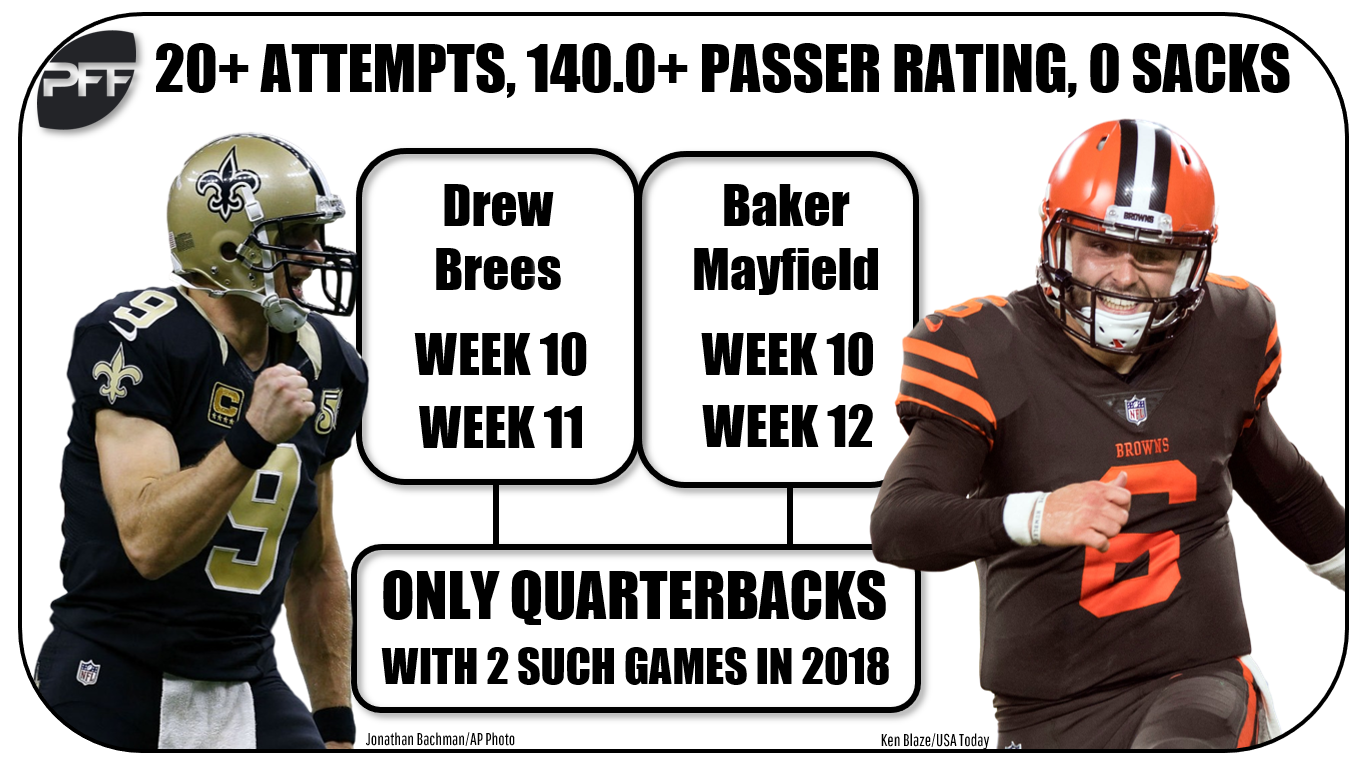 Interestingly enough, Mayfield was frequently compared to Brees coming out of college, and Brees would later praise Mayfield by saying, “I think he can be a lot better than me.”

As good as Brees’ recent stretch has been, Mayfield’s might be more impressive if adjusting for receiver play. Jarvis Landry has been Mayfield’s highest-graded wide receiver this year and he ranks just 49th, while Michael Thomas leads the position. Mayfield also ranks second-worst of 25 quarterbacks in drop rate (percentage of throws dropped by receivers), while Brees ranks eighth-best with a drop rate exactly half that of Mayfield’s (3.4%). Given Mayfield’s college resume, I’m confident he can continue this hot streak despite poor surrounding talent in Cleveland. And I don’t think it’s a coincidence Mayfield’s two best games have come during the three-game stretch that follows the departures of Hue Jackson and Todd Haley.

2. On Sunday Christian McCaffrey became just the 15th player to ever record at least 100 rushing yards, one rushing touchdown, 100 receiving yards, and one receiving touchdown in one game. He's the first player to accomplish this feat while also recording double-digit receptions. 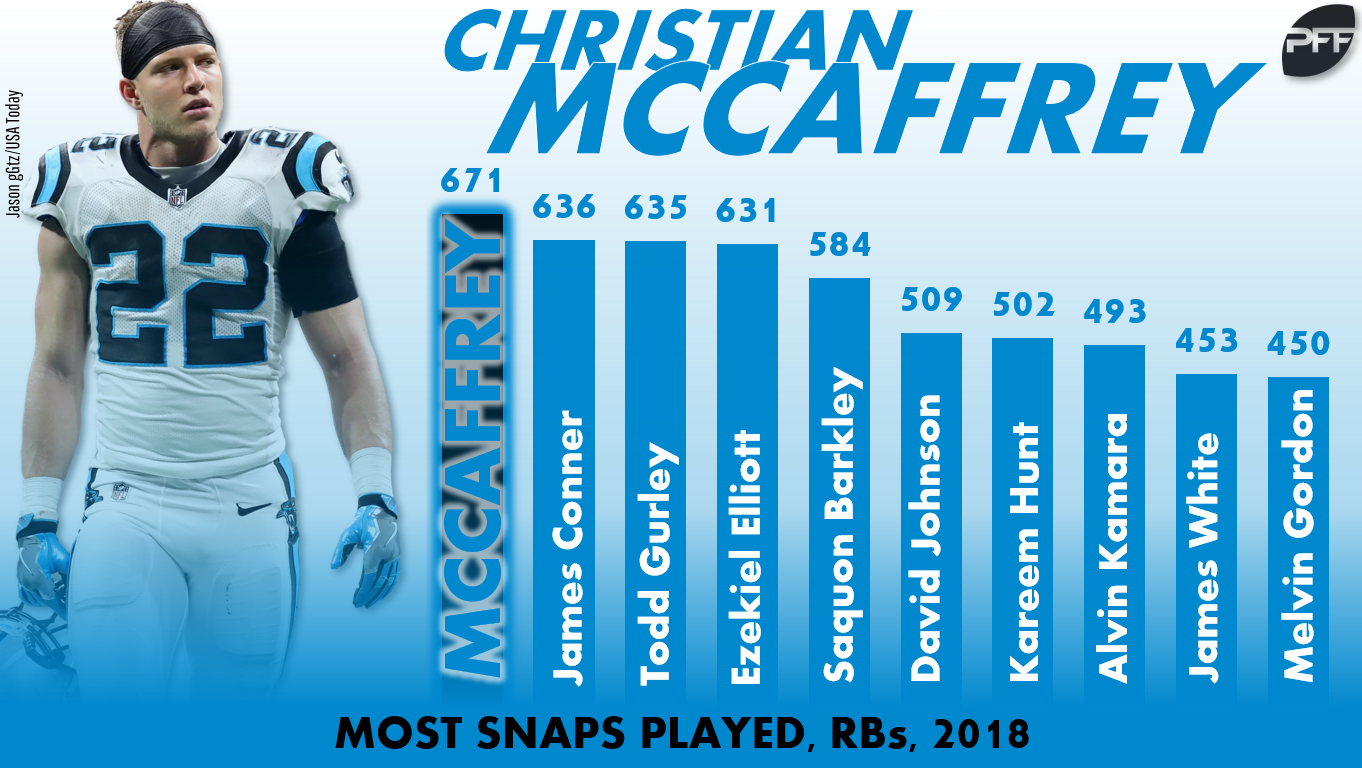 In total, McCaffrey turned 17 carries into 125 yards and a touchdown on the ground, and caught all 11 of his targets for 114 yards and one touchdown. This was good for 46.7 fantasy points, or the most by any player at any position since Week 12 of last year.

McCaffrey has quickly overcome his physical limitations (he’s 5-11 and 205 pounds) and his haters to become one of the league’s top bell-cow/workhorse running backs. He currently leads all running backs in snaps (671), while also ranking fifth in touches (197), third in touch percentage (53%), and fourth in yardage market share (33%).

McCaffrey now ranks behind only Todd Gurley, Saquon Barkley, and Alvin Kamara in fantasy points, averaging 24.1 per game. Astoundingly he ranks ninth in rushing yards (757, just three yards shy of seventh place) and would rank 18th among all wide receivers in receiving fantasy points. He’s also been one of the league’s most consistent fantasy options, finishing as an RB2 or better in all 11 games.

Several years ago I wrote an article about a phenomenon I deemed “the backup connection.” In short, here is it: When both are on the field at the same time, former backup quarterbacks (now thrust into a starting role) will lean heavy on a team’s former backup receiver (now also starting). I suggested this was due to a superior rapport based on the way reps are split up in practice and in preseason games. Still skeptical? Well, then it’s a good thing Week 12 offered some strong supporting evidence.

How actionable is this? Well, not very – none of these names had an especially big game, but it is another chance for me to reinforce my confirmation bias. I will say, Quinn seems like a name to monitor moving forward and, though I’m bullish on Edwards, there might be a chance he gets unseated if Flacco reassumes his starting job.

4. Leonard Fournette has played in five games this year but has only managed to play four full quarters twice.

Despite being ejected in the third quarter of a 24-21 loss to the Bills, Fournette still totaled 21 touches, 108 total yards, and two touchdowns. In Weeks 1 and 4, Fournette left on the first drive of the second quarter and didn’t return. So, through 15 quarters of football, Fournette totals 104 touches and 88.9 fantasy points. Or, per four quarters, he averages 27.7 touches and 23.7 fantasy points. Among all running backs, he would then rank first in touches per game and sixth in fantasy points per game. Keep in mind, because he never completed the third quarter of Week 12 or the second quarters of Weeks 1 and 4, perhaps those numbers should be even higher. In any case, it’s unlikely Fournette is going to be suspended for Week 13, which means he’ll be a mid-range RB1 this week, and probably every week moving forward.

On Sunday, Smith-Schuster exploded for 13 receptions, 189 yards, and one touchdown (on 17 targets). Pittsburgh got creative, moving him outside to take advantage of a better cornerback matchup. Antonio Brown's day was quieter, catching nine of 13 targets for 67 yards.

On top of having explosive big-play ability and week-winning fantasy upside, Smith-Schuster has also been one of the league’s most efficient and productive players. In fact, it’s scary to see how well he stacks up against Brown. 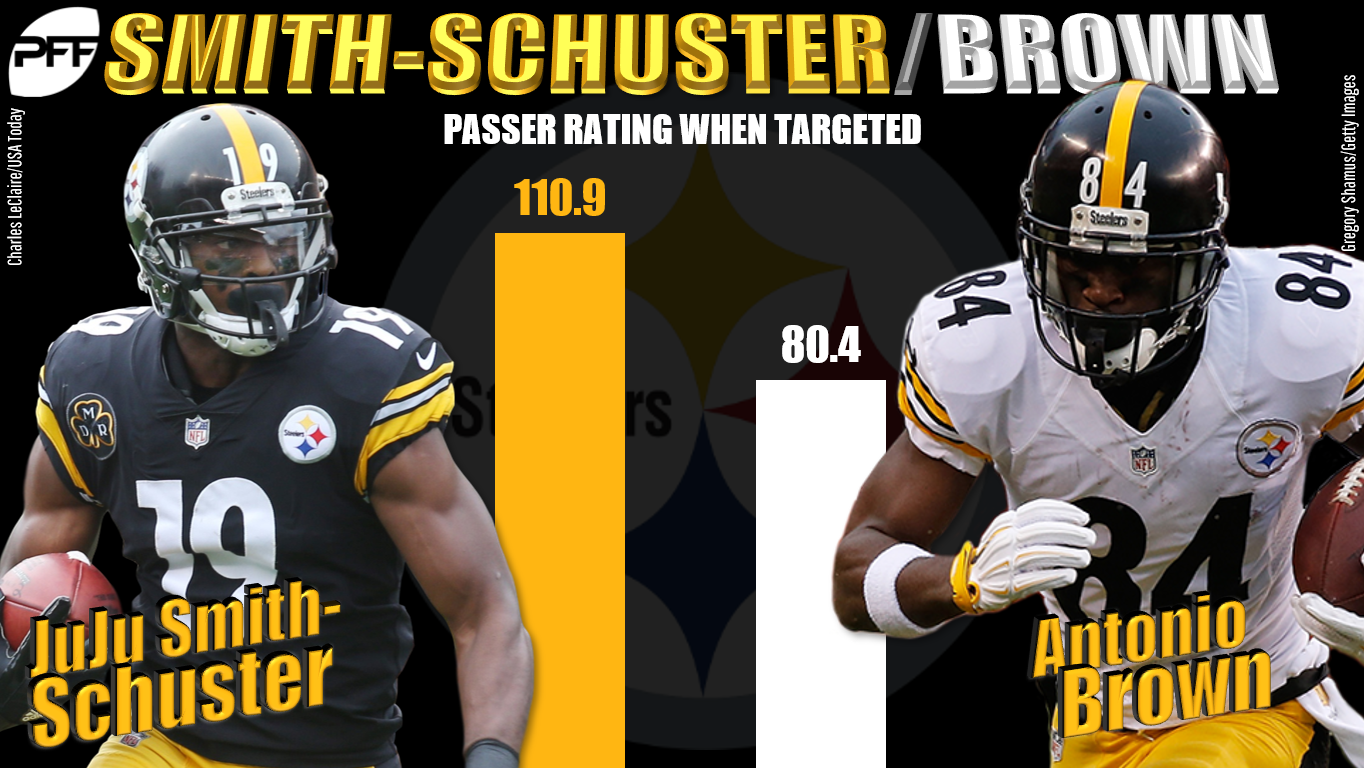 Brown’s saving grace for fantasy has been a league-leading 11 touchdowns, but with everything else factored in, I think there’s legitimate cause for alarm. Is this signaling a changing of the guard? Or is this just a small slump in an otherwise historically great (maybe the greatest ever) 80-game sample?