The Philadelphia Eagles defeated the Jacksonville Jaguars, 24-18,  in Week 8 of the 2018 NFL season. 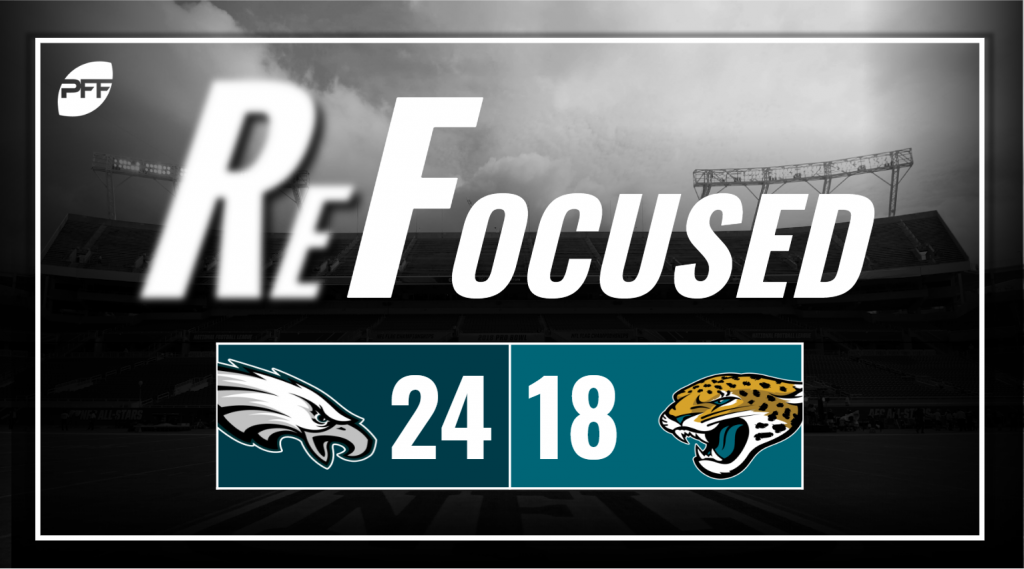 The Jaguars are playing their third left tackle this season, and Philadelphia edge defender Brandon Graham took advantage of this. Graham got the better of left tackle Josh Walker for most of the afternoon, as he generated multiple pressures and was a force against the run, as well.

With the way Jacksonville utilized the middle of the field with passes to running backs and crossing routes, there was a lot of pressure on Philadelphia's linebackers. However, both Nigel Bradham and Jordan Hicks had solid games, as they limited big plays by making good tackles after the catch.

Injuries forced the Eagles to work their way through four different offensive line combinations by the start of the second quarter with Isaac Seumalo and Halapoulivaati Vaitai playing two different positions apiece. The constant for the Eagles was their interior offensive line getting movement on the Jags' stout defensive tackles. The chopping and changing up front led to some understandable communication breakdowns, but when it counted, the Eagles' offensive line came up with the key drive to help Wendell Smallwood close out the victory.

Carson Wentz didn't let the Jags' defense dictate where he went with the ball throughout the game, looking for and completing passes in all areas of the field. His interception came on an exceptional read by Jalen Ramsey to cover a miscommunication to the left side of the defense and was a blip in an otherwise solid performance. When the Jags got pressure on Wentz, they had some success, but Wentz and his receivers made them pay when he was kept clean.

Undrafted free agent Quenton Meeks was forced into the starting lineup at corner due to injuries and held his own in a solid performance. He was close enough to contest multiple passes, breaking up a couple up in that mix. He balanced that with a couple of missed tackles and a big play given up to Jordan Matthews, but he held his own debuting for his senior teammates overall.

Calais Campbell benefitted from the Eagles' revolving door at offensive tackle with a productive game off the edge. Though he was hooked and driven a couple of times by Jason Peters in the run game, Campbell controlled his opponent for most of the game. He made contributions against both the run and pass, racking up multiple pressures and multiple stops as well as setting up his teammates.

Quarterback Blake Bortles had a mixed outing for the Jaguars, starting with his muffed snap on his first play of the afternoon. Later, Bortles provided a spark for the Jacksonville offense with his scrambles; however, he was also the victim of a couple drops by his receivers. He was also off-target on a couple throws, including his last pass attempt on a failed fourth down attempt by the Jaguars.

Though he played a limited role as a third-down running back, T.J. Yeldon had a solid game against the Eagles. He was especially impressive picking up blitzes and protecting Bortles and a threat out of the backfield on passing plays, including his 37-yard reception on a wheel route in the fourth quarter, which kept the Jaguars' hopes alive.

Philadelphia survived big injuries along the offensive line to keep the offense afloat while Bortles' inconsistent play helped the defense put together an impressive performance.

While Bortles' scrambles kept the Jaguars alive and were enough to move the chains, his and his receivers' inconsistencies in the passing game were too much for the Jacksonville team to overcome.