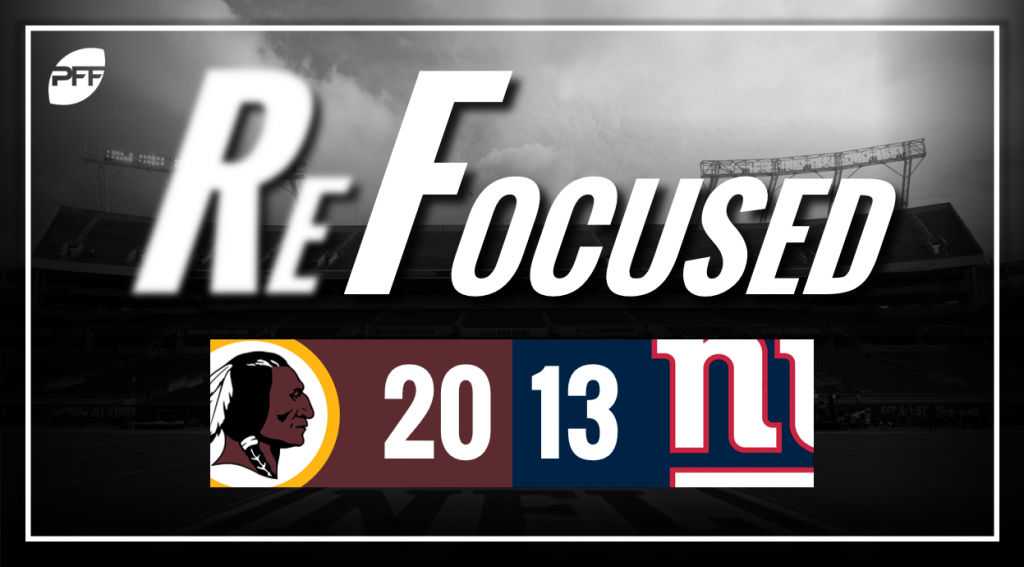 Quarterback Alex Smith had a quiet day, but he managed the game well and did just enough to get the win for the Redskins today. Smith did not turn the ball over and used his tight ends and running backs well to not get behind schedule on early downs.

It was a vintage performance from Washington running back Adrian Peterson. While the highlight of his day was his 64-yard touchdown run to seal the game, Peterson had plenty of nice carries where he gained more than what the offensive line provided to him. Although he did fumble the ball once, he also impressed in the passing game, as he had a receiving touchdown, as well.

The most impressive group of the day for the Redskins' defense was no doubt their linebackers Mason Foster and Zach Brown. Those two faced a tough matchup with the Heisman trophy winner Saquon Barkley lining up against them. But both Foster and Brown were outstanding containing Barkley in the passing game, and Foster impressed in run defense also by flowing to the point of attack and not missing tackles.

One of the better under-the-radar performances of the year for the Redskins has been the play of safety DJ Swearinger. The former South Carolina standout was one of the top-ranked safeties in the NFL coming into this game and did nothing to hurt that ranking on Sunday. He made sure tackles underneath when called upon in the box and read Eli Manning‘s eyes and get to the sideline from the middle of the field to get an interception off of Manning, as well.

Edge defender Olivier Vernon played one of his best games this season. Vernon got the best of left tackle Trent Williams on multiple occasions, and he also contributed by making plays defending the run.

Giants linebackers struggled against Washington, as neither Nate Stupar or B.J. Goodson stood their ground against the running game. Washington's running style often required the linebackers to run sideline to sideline; however, they were unable to come off blocks multiple times, including on Peterson's long touchdown run.

In what is now a common occurrence for the Giants' offense in 2018, the quarterback play of Manning has just not been good enough. The Giants couldn't find the end zone after a series of checkdowns at the end of the game when the clock was slowly ticking away. Manning had two interceptions on the day, both of which were on him. The first one he forced the ball to Odell Beckham Jr. in coverage in the red zone, taking points off the board. For his second, he stared down his receiver, allowing the free safety to easily come over and pick off his overthrown ball. The conversation has already started about a quarterback switch in New York, and it may not be long now until it actually happens.

It is tough to deny the athletic talent of Evan Engram at the tight end position, and he is not known as much of a blocker. You would then need him to make an impact receiving, which he did, just not favorably for the Giants. Engram had two drops, one of which when he was open past the markers on fourth down, killing a Giants drive.

Peterson had an outstanding day that was too much to handle for the Giants' defense. While Peterson's most memorable play came on his long touchdown run, he added multiple useful runs up until that point, as well.

The story of late for the Giants continues, as they continue to get sub-par to poor quarterback play from Manning. While his offensive line did not do him any favors, it is extremely difficult to win games in the NFL with the quarterback play that Manning has been producing.