As we head into Week 8, it’s time again for our weekly look at the fantasy football players on the rise or fall in the weekly rankings.

The fantasy season is rolling rapidly by. New information is presented to us each week and we must process it quickly and respond accordingly.

You don’t have much time to reflect before you must turn the page to the following week’s slate. The first step in that transition is assessing which players are on the rise and which ones are falling in the fantasy rankings coming out of the week we just wrapped up.

Over the last four weeks, Trubisky has scored more fantasy points than Patrick Mahomes — despite the fact he had a bye in Week 5. He has thrown for 1,003 yards and 11 touchdowns and rushed for 181 yards, a league-best mark by a quarterback, and two scores while finishing as QB1, QB2, and QB1 during this hot stretch. … Luck has been just as hot over the past month and continued the effort in a big way as he threw for four touchdowns for the third time in four weeks in his latest win over Buffalo. Luck only threw 23 passes and finished with just 156 yards, but he still leads the NFL with 311 passing attempts through seven weeks. … The Chargers won versus the Titans in London behind another solid effort by Rivers as he completed 19 of 26 passes for 306 yards and three touchdowns. He has now thrown for multiple TDs in all seven games this year and Sunday marked the second time in three weeks he’s gone over the 300-yard mark through the air.

With Sony Michel (knee) sidelined, White saw a season-high 38 backfield snaps and it parlayed into his second-best fantasy effort of the season. White has been targeted 57 times through seven games and now stands to see an increase in rushing attempts. … Chubb got a huge boost in value when the Browns dealt Carlos Hyde to Jacksonville. He netted a respectable 18/80/1 rushing stat line and appears poised to step right into the bulk of the early-down work in Cleveland. … No running back scored more fantasy points per opportunity (1.07) than Mack did in Week 7. He totaled 159 yards and two scores on 21 touches. If he can stay healthy, Mack looks to be capable of being a reliable weekly fantasy option. … Through seven weeks, Lindsay leads Denver in rushing attempts (75), rushing yards (438) and yards per carry (5.8), including his 28-yard TD run in Week 7 at Arizona. … Those that took a waiver wire stab on Mostert last week were happy to see him lead the 49ers’ backfield with seven carries for 59 yards. With Matt Breida (ankle) dinged up, Mostert is worth adding if he didn’t get scooped up in your league. 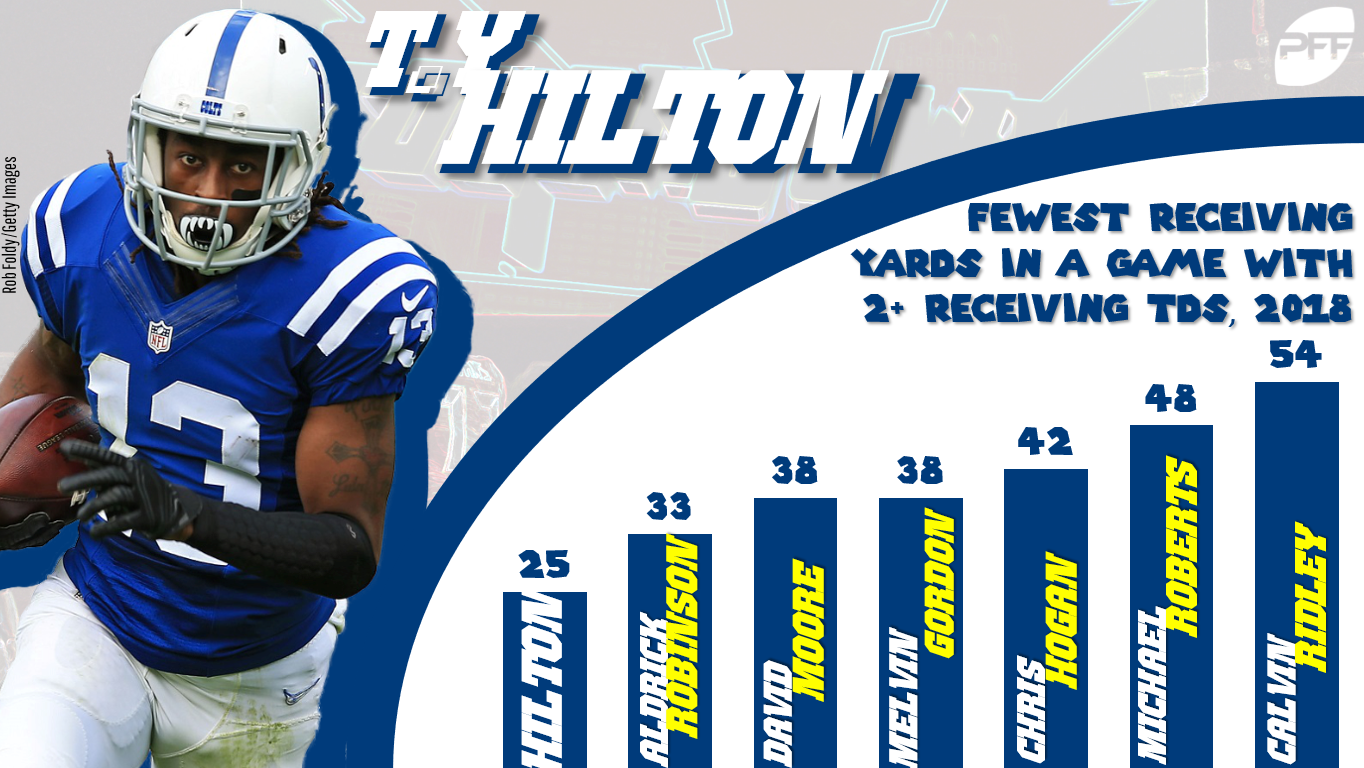 Welcome back T.Y. Hilton! The veteran wideout was only targeted four times in his return from a two-game absence despite the fact he played on 35 of the team’s 58 snaps, but he did score two touchdowns and finish with four catches for 25 yards. … Gordon continues to earn the trust of Tom Brady. He has been targeted 15 times over the last two games, including seven times this week. He finished with four catches for 100 yards and is definitely in the WR2 conversation. … Before many fantasy owners were even awake Sunday, Williams was posting big numbers in London against the Titans. Most of his production came on his 75-yard touchdown. Williams’ deep-play ability always makes him a worthy bench option, but as we’ve seen his floor can be extremely low. … It’s hard to excited about anything in the Tennessee passing attack, yet it is hard to ignore that numbers put up in Week 7 by Sharpe (7/101/0). If he keeps seeing the eight targets he got this week he could become appealing.

Njoku found the end zone for the second straight game Sunday as he pulled in four of his six targets for 52 yards and a TD. He’s clearly emerged behind Jarvis Landry as Cleveland’s No. 2 option in the passing game. … The Bears got a big effort from Burton in their shootout with the Patriots. He led all tight ends in Week 7 with 11 targets and finished with nine catches for 126 yards and a TD. … The Lions have targeted Roberts four times all season and he has pulled each of them for catches, including three touchdowns. Owners should hold off on Roberts for now, but he’s worth monitoring as he did score 16 times as a senior at Toledo. 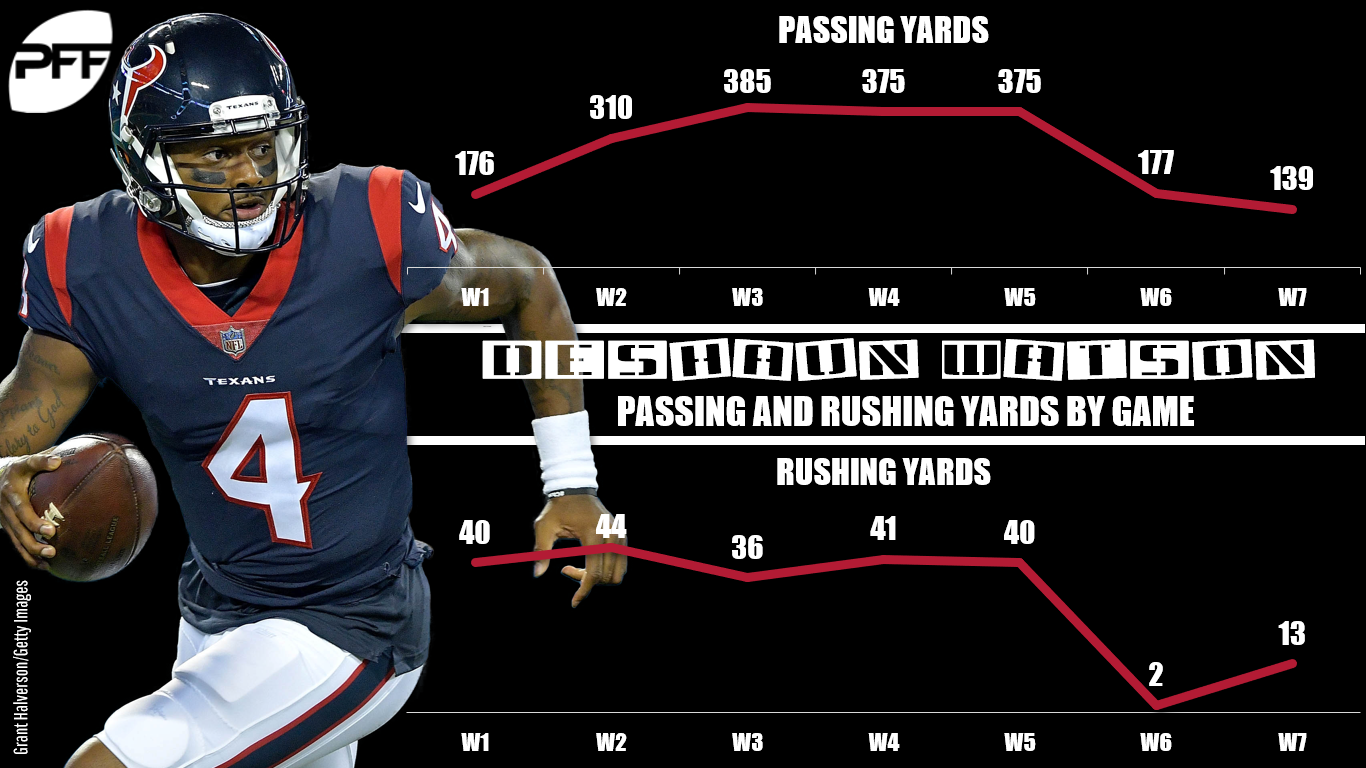 The Jaguars benched Bortles during Sunday’s loss to the Texans. His two fumbles lost doomed him. He got the vote of confidence on Monday to start Week 8 against the Eagles, but he is clearly on a short leash. … The news of Watson needing to take the bus to Jacksonville rather than fly with the team due to concerns around his partially collapsed lung is concerning. For the second straight week Watson posted dismal numbers both through the air and on the ground. With the Dolphins on tap on Thursday night the short week will not do him any favors in his recovery. … Arizona opted to part ways with Mike McCoy, promoting Byron Leftwich to offensive coordinator. That should help Rosen long term, but it’s going to take some time for him to get to where he can be trusted in fantasy lineups. It does appear that his toe injury he sustained last Thursday isn’t serious though, so he is expected to start in Week 8 against the 49ers.

Without the benefit of being the lone handcuff option to Leonard Fournette with the Jaguars’ addition of Hyde, Yeldon slides down to a flex option at best. He mustered just 25 rushing yards on 12 carries and 2.5 yards after contact in Week 7. … Johnson failed to capitalize on facing a Broncos’ rushing defense that had ceded back-to-back 200-yard rushers entering the contest. He was held without a touchdown for just the second time all season, but he also failed to rush for 60 yards for the sixth time in seven games. … It was a rough week for Clement, who averaged 0.8 yards per carry. He had fewer rushing attempts (8) than Wendell Smallwood for the second straight week.

It was a disappointing day at the office for Robinson, as he finished with just one catch for four yards on five targets. Clearly not at 100%, Robinson has been especially disappointing considering how well the Bears’ passing attack has been performing. … Jones has failed to get to even seven standard fantasy points in four of his six contests this season, including his 2.9 point effort in Week 7. … It was great to see Diggs get 14 targets in Week 7, but he was only able to translate that into eight catches for 33 yards. Over the last three weeks, Diggs has posted 21 catches for 157 yards. … Callaway has the fourth-highest drop rate (17.4 percent) of all qualifying receivers on the season with four drops and 16 catches on 37 targets. As a result, it comes as no surprise that his target volume is on the decline, including his two targets in Week 7 against the Bucs.

Seven weeks into the season and it’s hard to determine what is a bigger surprise — that Reed has played in every game, or that he has only scored one time and yet to break 65 yards. Reed was only targeted three times against the Cowboys and finished with just two catches for 43 yards. … We’ve seen Brate’s floor far too often in 2018. If he doesn’t nab a TD catch he’s pretty much useless at this point in most 12-team or smaller formats. … Add Clay to your drop list too. He’s yet to break the 40-yard mark this season and still looking for his first TD since Week 3 of 2017, a span of 17 games.