Stock droppers: Fantasy options whose ADPs have fallen from 2017

Analyzing players for fantasy football is easy. You assemble your evidence and make arguments based on the case you’ve assembled. What is difficult is knowing how to appropriately weight each piece of evidence. All too often we can gather too much information, to the point of information-overload. Equally difficult is avoiding common cognitive biases such as hindsight-bias.

Today, we’re going to look at 18 players I think fantasy experts and mock drafters are over-thinking – players who have seen their ADPs drop precipitously, and (I think) erroneously, from the 2017 preseason.

Through the first 15 weeks of last season, Jeffery ranked 15th among wide receivers in total fantasy points. He would draw just four targets over the next two weeks, after Philadelphia had already secured a first-round bye. Across three postseason games he averaged an impressive 17.3 fantasy points per game with backup Nick Foles under center. Remarkably, he did all of this with a torn rotator cuff he suffered in July of last year. If he could put up WR2 numbers with a torn rotator cuff, imagine what he could do in this offense while healthy! Unfortunately, he isn’t fully healthy yet, and we don’t yet know when he might return. Luckily the depressed ADP insulates us somewhat. Right now, he carries some risk but would be an indisputable steal if he’s ready for Week 1.

Before a season-ending neck injury suffered in Week 8, Garcon ranked fifth among wide receivers in targets. Garcon’s production (24th-most fantasy points) wasn’t as strong as his volume, but his play must have been pretty good, considering he graded out 19th-best (of 116 qualifying wide receivers) last season. Perhaps the issue was poor quarterback play. Of 39 qualifying quarterbacks, both C.J. Beathard and Brian Hoyer graded out bottom-10 last year. If that was the cause for Garcon’s inefficiencies, it shouldn’t be as much of an issue this year, considering Jimmy Garoppolo graded out fourth-best among quarterbacks last year.

What changed between the 2016 league-MVP iteration of Matt Ryan (25.6 fantasy points per game) and the Matt Ryan (18.7) we saw last year? Honestly, not much. Ryan was still just as good as ever. Ryan was our third-highest-graded quarterback last year, ranked third-best in depth-adjusted completion percentage, and ranked fourth-best in adjusted passer rating. He did get unlucky, however. Ryan threw 12 interceptions last season but was credited with only five turnover-worthy throws — the largest differential of the past decade. Meanwhile, 34 of his passes were dropped last year, which ranked fourth-most among all quarterbacks. He’s an obvious positive regression candidate heading into 2018.

Amendola’s price has dropped nine spots but that makes little sense considering his situation is even better this year. Amendola was highly effective last year (grading out 20th-best at the position) but was only a part-time player in New England, totaling just 53 percent of the team’s snaps in games played. Over the past four seasons, he’s reached two-thirds of the team’s snaps in just 10 of 57 games (17.5 percent). He was highly effective in those games, averaging 15.0 fantasy points per game (would have rank 12th-most last year), with eight of his 13 highest scoring games coming in these weeks. In Miami, he should see the field far more often. All of Jarvis Landry, Kenny Stills, and DeVante Parker averaged at least 87 percent of the team’s snaps in games active last year. Amendola projects to be the team’s starting slot wide receiver which is more good news, considering Miami led the league in slot targets last season (with Landry making up just 56 percent of these targets).

I like Mariota for many of the same reasons I liked Matt Ryan. He was much better in 2017 than anyone seems to realize. It was actually the most efficient season of his career but, like Ryan, he was also extremely statistically unlucky. On top of this, OC Matt LaFleur should be a significant fantasy upgrade from Terry Robiskie whose slow-paced (25th in plays per game last year) and run-heavy (26th in pass percentage) offense sapped Mariota of some of his fantasy potential.

I'm worried about McCoy’s efficiency decline, the potential of the offense as a whole, and the risk that he might be suspended. Even with all of this considered, his ADP is still too low relative to potential workload and production. Last year, he ranked seventh in expected fantasy points per game, 10th in fantasy points per game, and was one of the league’s top bell cows.

Cooks fell 14 spots from his ADP last year, but I don’t think the landing spot in Los Angeles is much worse than New England. After all, Los Angeles was the only team to outscore New England last year. Cooks ranked 19th in fantasy points per game while averaging 6.8 targets per game. Los Angeles WR1 Robert Woods ranked 18th and averaged 7.3 targets per game. After the team traded a first-round pick to acquire him and subsequently made him the fourth-highest-paid wide receiver in the NFL, he’s a good bet to supplant Woods as the team’s WR1 and beat current value.

Winston ranked 10th in fantasy points in 2016 and is now being drafted as a low-end QB2. Last year, Winston averaged 306.9 yards per game in games he played on at least 50 percent of his team’s snaps. For perspective, 306.9 yards per game would have led the position last year by 20.8. During those weeks, he averaged 19.9 fantasy points per game, or what would have ranked fourth-best among all quarterbacks with as many qualifying games. Despite the thee-game suspension, he’s still a strong value.

Brown totaled seven touchdowns with over 1,000 yards in his sophomore year in 2015. Since then, he’s missed six games and spent an additional 10 on the injury report dealing with various health-related issues. Now, he’s fully healthy and, reportedly, the standout of camp in Baltimore. Baltimore’s other two starting wide receivers have also never caught a pass from Joe Flacco before this offseason, so Brown’s immediate rapport with his new quarterback is important. Brown, with 4.34-speed, could be the deep threat Baltimore (drafted Breshad Perriman to be but) has lacked since Torrey Smith finished as a WR3 or better in four consecutive seasons 2011-2014.

As I outlined here, Benjamin one of the more obvious values in current drafts and has no business being drafting as low as he is. 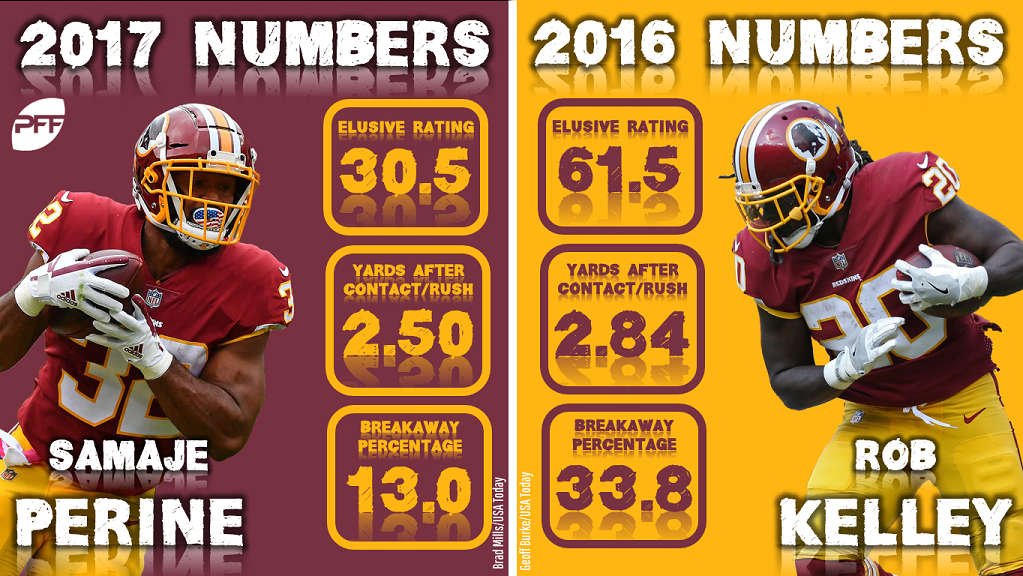 Last season, Kelley played in just four games before suffering an ankle injury that eventually landed him on the IR. Up until that point he operated in a near-even committee with Samaje Perine, totaling 66 touches to Perine’s 72. By ADP, Perine is considered to be the heavy favorite to assume Derrius Guice’s now-vacated role as the team’s early-down bruiser (or at least lead the committee), but I’m far less convinced. Perine averaged 3.4 yards per carry and graded out eighth-worst of 57 qualifying running backs last year. Kelley, meanwhile, was far more efficient when healthy in 2016. That year, he ranked second-best in PFF elusive rating (61.5) of 32 qualifying running backs.

What’s the most likely scenario for Martin? Probably that he remains fantasy irrelevant while playing behind or stuck in a committee with Marshawn Lynch. That’s definitely his most likely scenario, but that doesn’t mean he’s not still now worthy of a pick due to upside (relative to price). Martin has played hurt through much of his career and never looked close to the same player when dealing with injuries. Martin has played at least 12 games in just two of his NFL seasons. In those years (2012 and 2015), he finished second and fourth among running backs in fantasy points. In both seasons he ranked top-three in yards after contact per attempt and top-seven in missed tackles forced per attempt.

Nelson seemed a shell of his former self last year. Part of this was that 61 percent of his targets came from backup Brett Hundley. Part of this might also be that at age 33 he’s in the twilight of his career. Still, it’s hard to bet against Nelson, who has been one of the best and most efficient wide receivers of the past decade. Even if he’s lost a step, he could still return value on touchdown potential alone. Amari Cooper has never been effective nor seen much usage near the end zone (89th of 102 wide receivers in red zone targets per target since entering the league). Nelson, meanwhile, has been one of the league’s most efficient touchdown scorers and Michael Crabtree leaves behind 8.3 touchdowns per season in his departure.

Through two preseason games, Powell has played on 24 of the team's 27 first quarter snaps. Five of his 13 routes have come split out as a wide receiver. While this sort of bell-cow workload might not carryover into the regular season, he does seem like the best bet to lead his team’s running backs in fantasy points. The Jets are projected to see plenty of negative game-script this year, which gives him an edge over Isaiah Crowell (who is much less skilled as a pass-catcher), and Elijah McGuire is still rehabbing from a fractured foot. At his current ADP, he’s one of the most glaring values in contrast to my rankings.

Despite Chris Godwin dominating offseason hype, Jackson is locked into a starting role, and has been one of my favorite late round targets, as I explained here.

Gore is an unsexy pick but he might be immortal. At the very least, he has no business being drafted in the sleeper-range, as I detailed here.

Pryor ranked 21st among wide receivers in fantasy points in 2016 – his first full season at the position and while catching passes from a stable of backup-caliber quarterbacks. Last year, he saw 11 targets in Week 1 but, also tore multiple ligaments in his foot and ankle and then never recovered. Per Pryor, noted foot specialist Dr. Robert Anderson couldn't believe he was still playing on it. For this reason, I’m willing to throw out the entirety of his 2017 season. Unfortunately Pryor is still not yet 100 percent, rehabbing from a broken ankle suffered in May of this year. In any case, he has no business going undrafted in fantasy leagues and has been one of my favorite late round targets all offseason.

This one seems obvious – at a price-tag of “free,” Bryant is all upside with zero risk. The common narrative is that Bryant is “cooked” and “done in the NFL,” but I’m less pessimistic and would bet serious money he’s on an NFL team by Week 1. Earlier this offseason, PFF analyst Aaron Bloch argued Bryant still has a lot left in the tank and wasn’t seeing the same percentage of catchable targets as he was under Tony Romo, which played a role in his efficiency decline. Other analysts have echoed similar sentiments – Bryant’s skillset just didn’t match up well with Dak Prescott’s strengths as a passer. He’s almost certainly not the same player he once was but he’s definitely worth owning.