Metrics that Matter: Where did Drew Brees' fantasy production go?

Drew Brees finished as a top-six fantasy quarterback in every season from 2006 to 2016. In 2017, he finished 11th. I tweeted this fact out about a month ago. Two different followers replied simply, “He’s done.” While I think this might be the new narrative on Brees, I don’t think it’s factually accurate.

In terms of fantasy points (not really a good marker of whether a player is in the twilight of their career), this undoubtedly was a brutal season for Brees. He finished 14th at the position in fantasy points per game. He averaged under 0.5 fantasy points per game more than Blake Bortles. Only looking at games started and finished, all of Case Keenum, Jameis Winston, and Josh McCown would have finished higher. C.J. Beathard would have joined these names too, if we excluded his Week 13 game against Seattle when he was pulled late in the fourth quarter.

Still, looking at more traditional metrics, Brees was just as incredible as he’s always been. Among all 29 quarterbacks to play on at least 500 snaps, Brees ranked first in yards per attempt, second in passer rating, second in adjusted net yards per attempt, and behind only Tom Brady in PFF grade. By a metric I loathe (let’s call it metrics that don’t matter), Brees set a new NFL record in completion percentage (72.0 percent), and now holds three of the top four seasons by completion percentage all-time.

When Sam Bradford previously set the record for completion percentage in 2016, unsurprisingly, he also posted the third-lowest average depth of target in a single season this past decade. Brees’ 2017 season ranked 18th-lowest, by comparison, and so I’m not yet willing to concede that this new NFL record is anything to get excited about.

Luckily for us, five years ago, ESPN’s Mike Clay developed a metric that provides more nuance in the case of completion percentage, by adjusting for depth of target on each throw. His formula looks like this:

Here’s all quarterbacks with at least 250 pass attempts in 2017: 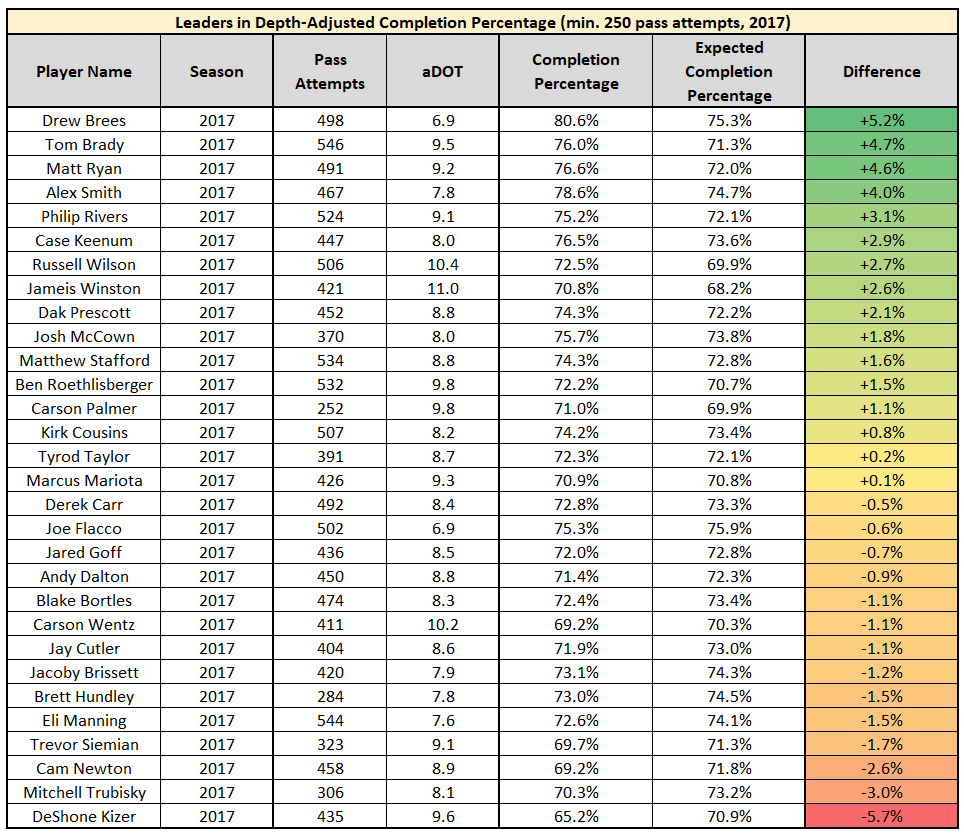 As you can see, even accounting for Brees’ low average depth of target, he was still the league’s most accurate passer. This also isn’t exactly new territory for Brees, as he’s also the most accurate passer of the past decade by this same metric, ranking just ahead of (in order) the illustrious names of Aaron Rodgers, Russell Wilson, Philip Rivers, Peyton Manning, and Tom Brady.

There are also some other interesting takeaways from this chart:

As with all statistics, however, it’s important to note this does not paint a full picture. With quarterbacks, their efficiency is always tethered to the skill of their receivers. Eli Manning ranked poorly here, but due to injuries to Odell Beckham Jr., Sterling Shepard, and Brandon Marshall, his second-most-targeted wide receiver was Roger Lewis (our 15th-worst-graded receiver). If his receivers had trouble separating, this of course would have played a role in his poor accuracy numbers.

So, if Brees was just as good as he’s always been, what was the culprit for Brees’ down fantasy year? Mainly, he just attempted fewer passes – roughly 7.9 pass attempts per game below his seven-year trailing average. That’s a staggeringly dramatic change, obviously capping his upside.

So the final question is, and this is one that’s trickier to answer, where should we be drafting Brees in 2018? Brees is technically a free agent, but he’s made it clear he wants to return to New Orleans. I’m not sure there’s much incentive for the Saints to move away from the more run-heavy attack that worked so well last year (their first winning season in four years). Last season, on the backs of Mark Ingram and rookie phenom Alvin Kamara, the Saints ranked fifth in rushing yards per game, first in rushing touchdowns per game, and second in yards per carry. This was only the second time of the past decade Sean Payton’s Saints passed on under 60 percent (55.7 percent) of their offensive plays. The other time this happened was in 2009, when they won the Super Bowl.

On top of the volume decline, Brees also seemed to get a little unlucky in the touchdown department. As numberFire’s J.J. Zachariason outlined here, touchdowns are fairly random, and a good way of spotting value is contrasting prior career touchdown rate (passing touchdowns per attempts) with the touchdown rate in their more recent season. As you can see in the chart below, using this same methodology, Brees should be one of our top regression candidates. (Matt Ryan too, based on both charts.) 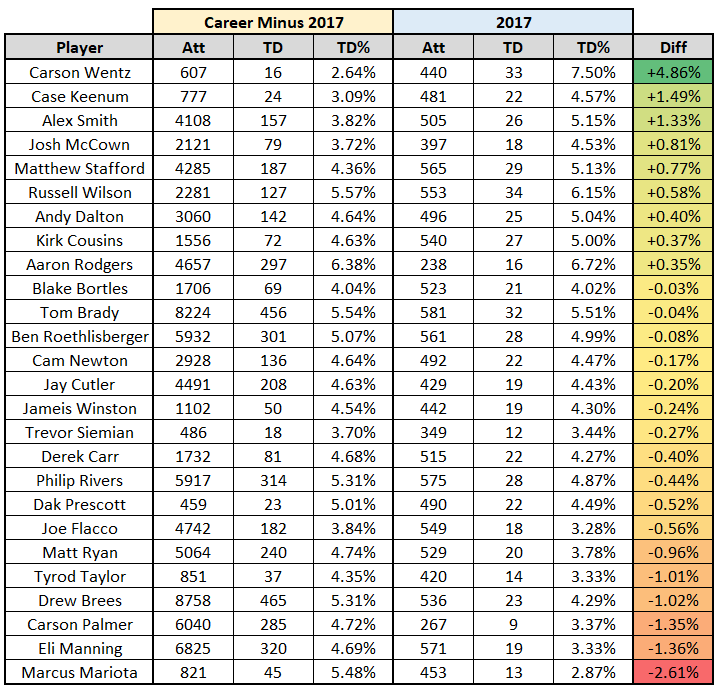 As it stands, I have Brees as my No. 4 quarterback in early rankings. Although I’m concerned about passing volume, he’s still one of the most efficient quarterbacks in the league, his touchdown rate should skew closer to his career average, and the larger sample shows he’s as dependable as they come.