With another week of action behind us, and some more fresh stats to analyze, I’m here to help you with your toughest fantasy football start/sit decisions for Week 9 of the NFL season.

Fitzpatrick and Jameis Winston combine to average 28.7 fantasy points per game, which if they were one guy would be most in the league and most by a single quarterback all time. Fitzpatrick, of course, has been the far more efficient one of the two, leading the league in passer rating and ranking second-best in PFF grade, while Winston ranks 29th and 31st, respectively. In a neutral matchup this week, he’s a high-end QB1.

Gronkowski has no doubt been a disappointment if you own him, but he’s still “Gronk,” the best fantasy tight end of all time. He’s also coming off his best usage of the season, drawing eight targets and 15.6 expected fantasy points in Week 8. You probably don’t have much of a choice either way, but he’s still a high-end TE1 in my rankings.

Much like Gronkowski, it’s hard to start Landry with much confidence, but you likely don’t have much of a choice either. He’s seen between 10 and 15 targets in each of his last six games and draws a Kansas City defense giving up the 12th-most fantasy points per game to opposing wide receivers. Hopefully the new offense in Cleveland will help improve his nearly-league-low 5.6 yards per target average.

Murray is a low-end RB1 if Dalvin Cook is out and a low-end RB2 if Cook plays. I suspect even if Cook is active he’ll be on a touch-count (like he was in Week 4), while Murray receives the bulk of the work. The matchup is ideal this week, against a Detroit defense that ranks worst in both yards allowed per carry (5.53) and rushing yards allowed per game (136.0).

Tampa Bay averages 41.7 pass attempts per game over the past two seasons. Over this span, with Ryan Fitzpatrick under center, Jackson averages 6.5 targets per 40-pass-attempts and 16.8 fantasy points per 40-pass-attempts. That’s 1.2 targets and 9.0 fantasy points more than when compared to his numbers with Winston. Jackson, our ninth-highest-graded wide receiver this year, is a mid-range WR2 this week.

Baldwin admitted earlier this offseason he wouldn’t be 100% at any point this season. His usage this year might be a clue he was telling the truth. Despite seeing a full complement of snaps since returning in Week 4, he ranks just 70th among wide receivers in targets per game (4.8) and 79th in fantasy points per game (7.5).

McCoy has finished as an RB2 or better just once this season. The chances of that happening this week are low, with a 14.0 implied point total (lowest) against a Bears defense that ranks third-best in yards allowed per carry (3.49) and fourth-best in schedule-adjusted fantasy points per game to opposing running backs 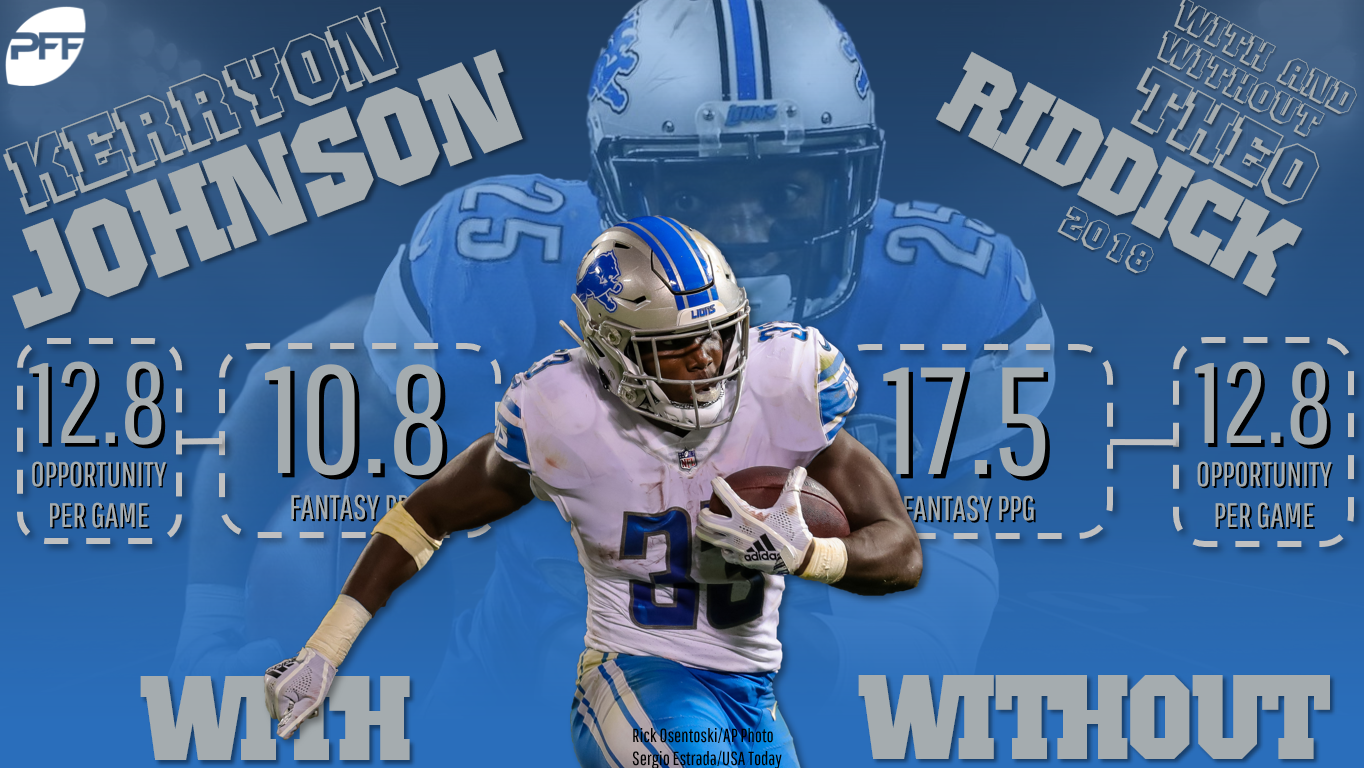 Barber had a season-high 19 carries and 85 rushing yards last week but is still too risky to start as anything more than a mid-range RB3 – even with fellow running back Ronald Jones out. As 6.5-point underdogs, and with only six receptions all year, he’s a touchdown-or-bust option with a high-likelihood of getting scripted out of good volume. Even when he has had good volume, it hasn’t mattered much for fantasy. Barber ranks 23rd among running backs in touches but just 41st in fantasy points. Meanwhile, Carolina is giving up the ninth-fewest fantasy points per game to opposing running backs. 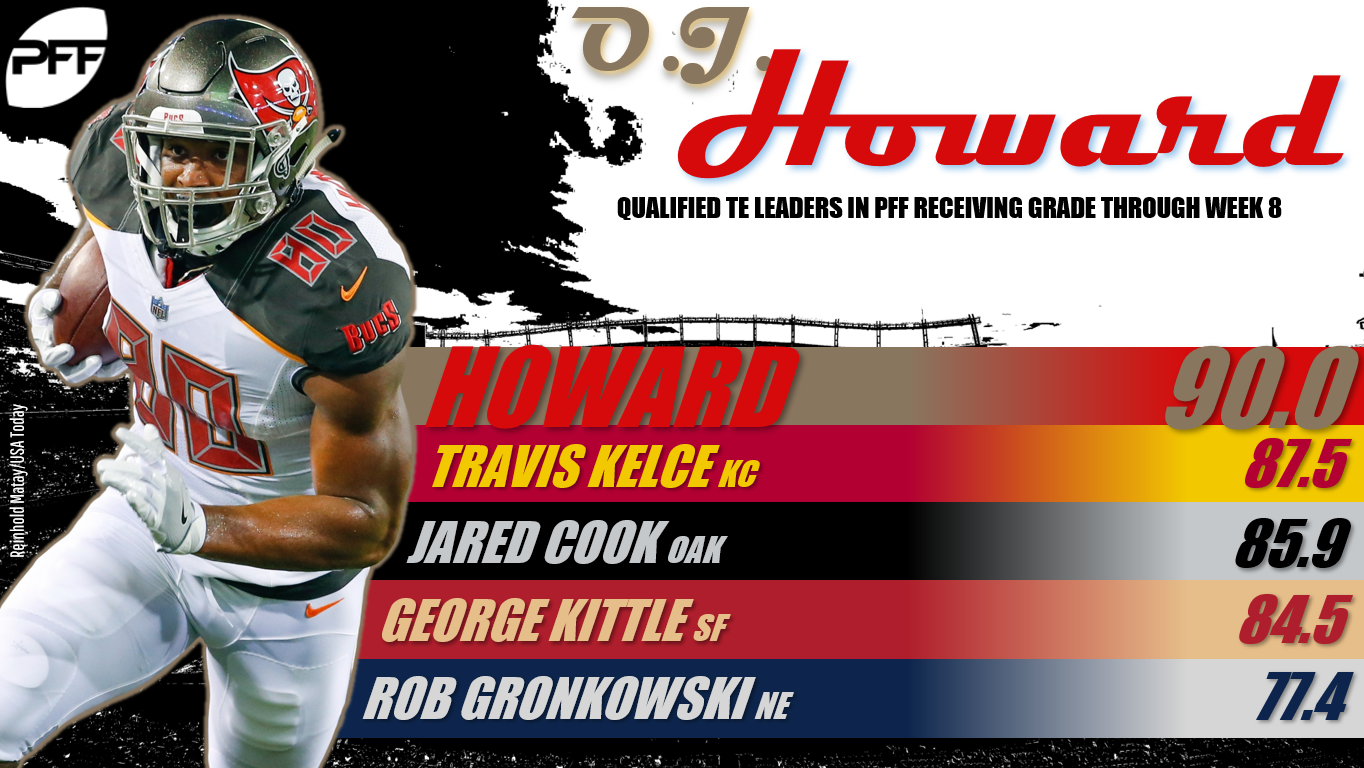 Although Jameis Winston favored tight ends far more than Ryan Fitzpatrick has, as I outlined here, Howard is still a strong start this week. Howard is our single highest-graded tight end this year and averages 14.0 fantasy points per game in games he started and finished. That ranks fifth-best at the position.

Martin saw 15 touches for 89 yards in a 14-point loss to the Colts last week. Before that, Marshawn Lynch averaged 17.5 touches per game, despite only playing in one victory. The 49ers are giving up the 12th-most fantasy points per game to opposing running backs, and this may be Martin’s one chance at good gamescript, considering C.J. Beathard is questionable with a wrist injury. I like his chances of returning fringe-RB2 numbers this week.

Carson is averaging 19.3 touches per game over his last four games. On top of good volume, he’s also our second-highest-graded running back this season. The Chargers rank 12th-worst in yards per carry allowed (4.47) and the Seahawks have the ninth-highest implied point total of the week (24.75). He’s a mid-range RB2 this week.

Thompson is risky coming off an injury, but the matchup is ideal. Thompson is averaging 5.2 carries and 6.8 targets per game and draws an Atlanta defense that’s giving up the most receiving fantasy points per game to opposing running backs. In fact, Atlanta has surrendered the most receptions to opposing running backs in every year of Dan Quinn’s head coaching tenure. If Thompson is active, he’s worth starting as a flex option in PPR leagues.

Chubb averages 18.0 carries and 2.5 targets per game over the last two weeks, despite Cleveland leading on only 32% of their plays over this stretch. Gamescript is unlikely to be good against the Chiefs, as 9.0-point underdogs, but the matchup is good on paper. Kansas City ranks second-worst in yards per carry allowed (5.31) and are giving up the most fantasy points per game (32.4) to opposing running backs.

Robinson is averaging under three catches per game over his last four games, including a one-catch, four-yard performance in Week 7 before missing Week 8. To make matters worse, Robinson projects to be shadowed this week by Tre’Davious White. Over the past two seasons, White ranks eighth-best of 86 qualifying cornerbacks in fantasy points allowed per route in coverage.

Trubisky ranks third among quarterbacks in fantasy points scored over the past five weeks but is still an easy fade this week. He’s our worst-graded starting quarterback and draws a Buffalo defense that ranks second-best in schedule adjusted fantasy points per game allowed to opposing quarterbacks. Chicago likely won’t need to go pass-heavy as 9.5-point favorites against the Nathan Peterman-led Bills.

Stafford has finished as a top-12 QB just once all year and has now lost his best receiver in Golden Tate. On top of that, he averages only 14.4 fantasy points per game in eight career games against Mike Zimmer’s Vikings.

Even if Cook is active, it’s unlikely he sees a full workload. He’s played in only one game since Week 2 – a Week 4 contest where he was limited to only 10 touches. With Latavius Murray playing well of late (averaging 5.38 yards per carry over the past three weeks), I suspect Minnesota will take it easy on Cook in his first game back.

Per Ian Rapoport, “It’s Sutton’s time.” Per Jeff Darlington, “Denver believes Sutton is ready to be a star.” With Demaryius Thomas and his 7.0 targets per game now out of the picture, it looks like it’s Sutton’s time to shine. Sutton hasn’t seen great volume but does rank fifth in end-zone target market share (42%). He also has the matchup in his favor, up against Houston. The Texans are giving up the fourth-most fantasy points per game to opposing wide receivers lined up to the left, which is where Sutton runs over half of his routes. 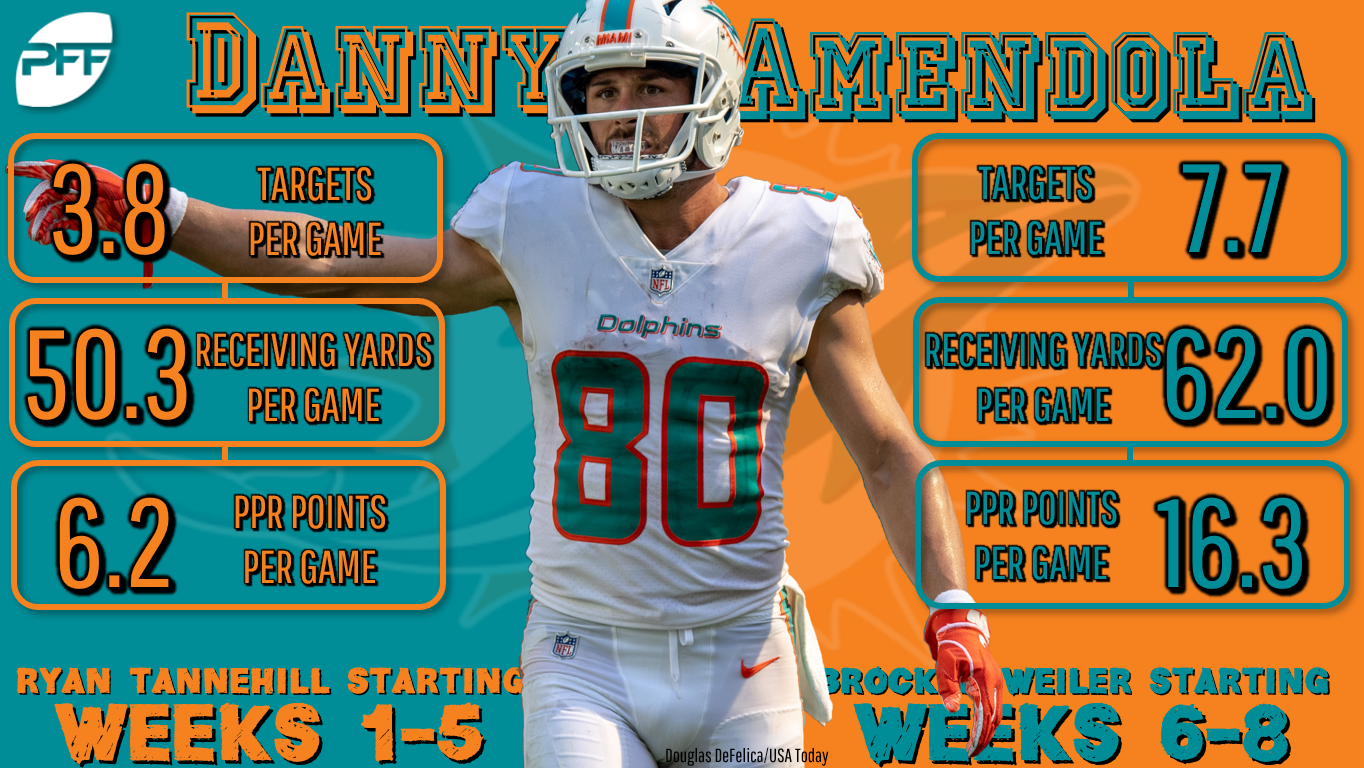 Okay, if you own Jones, I think it is now officially time to get hyped. The team just traded away Ty Montgomery (31% of the team’s snaps), and Jones is coming off of his biggest role of the season. In Week 8, Jones played on 62% of the snaps, drawing 12 (of 18) carries and two (of four) targets out of the backfield. In a neutral to slightly below average matchup this week, Jones is a high-end RB3.

Snead has seen at least seven targets in each of his last five games and averages a team-high 9.3 targets per game over his last three. He also has the best matchup this week, against a Steelers defense that is giving up the third-most fantasy points per game to opposing slot wide receivers (where Snead runs 83% of his routes).

If desperate for a spot start this week, you can do a lot worse than Smith. Sure, he’s only seen 13 targets over the last three weeks, but he leads the team in deep targets over that span (four). The Rams are giving up the second-most fantasy points per game to wide receivers on deep passes, and he should run the most routes against Troy Hill, who has given up 280 yards and two touchdowns over the past three weeks.

(READ MORE: Scott Spratt picks out some players to trade for. Tyler Loechner breaks down the trade value chart.)