Murray had his first three-touchdown game Sunday. He’s had multiple touchdown passes or a rushing score in all but one game so far, and has thrown for 300-plus yards three times in six weeks. He’s ahead of pace for every rookie in the last decade except Cam Newton and Robert Griffin III.

Minshew had his first bona fide bad game in Week 6, generating no touchdowns, throwing his second interception, and managing only 163 passing yards. He was one of three quarterbacks (along with Murray and Patrick Mahomes) to put up at least 16 points in every week up to that point, so while Week 6 was a disappointment, Minshew’s still ahead of the game, and ahead of the paces of Jameis Winston, Russell Wilson, and Baker Mayfield.

Jones had a monster first start in Week 3, but since then he’s been quieter, averaging 189 yards, 1 touchdown, and 2 interceptions per game in his last three. He’s still ahead of Mayfield’s pace from last year (like Jones, Mayfield didn’t start from Week 1).

Jacobs is easily the leading fantasy rookie running back so far despite having his bye in Week 6. That’s in part testament to his good play and in part an indictment of the rest of this year’s rookie running back class. Jacobs is a fair shade behind the pace-setting rookies over the last decade, but there are plenty of strong rookies he’s beating.

Jordan Howard’s presence has really ruined Sanders’ upside so far. Howard has seized the No. 1 job in the Philadelphia backfield, and while it’s still a committee overall, Sanders having the No. 2 role in a committee does not portend a big rookie point total.

Montgomery has to be one of the most disappointing fantasy draft picks of the 2019 season. He had risen to a third-round value in many drafts by the end of draft season, but he has yet to have a game with 70 rushing yards or more than 13.8 PPR points in a game. There’s still time for him to turn that around, but not many signs yet that it’s coming. 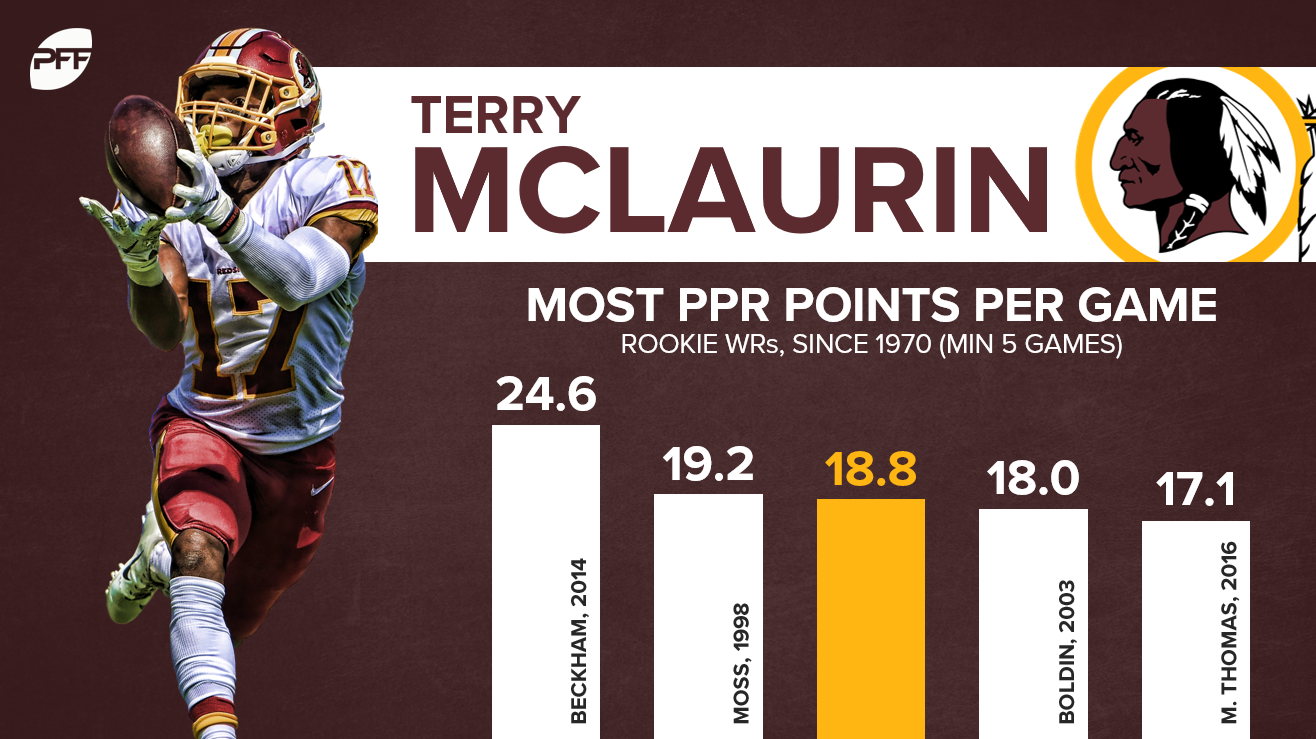 Even with a game missed to injury, McLaurin is better than all but three of the top fantasy rookies over the last decade. As our Scott Barrett noted in his piece on the fantasy stats to know from Week 6, McLaurin’s per-game pace of 18.8 points would be third among rookies since the merger. It’s hard to see McLaurin maintaining this pace all season, but he’s the top fantasy rookie receiver so far, and it’s not that close.

Brown missed Week 6, and has been fairly quiet since his monster Week 1, but he still has elite upside in a DeSean Jackson sense. Expect him to have more big games the rest of the way, but expect him to also have some disappointing outings.

Metcalf has at least 60 receiving yards in four of six games, but has only topped 70 once. It’s been a run of so-so performances that make for a good-enough fantasy point total, but not a lot of huge individual fantasy days. Will Dissly‘s likely season-ending injury, though, could lead to more work for Metcalf going forward.

Obviously, Hockenson hasn’t had a chance to play Week 6 yet, with the Lions going Monday night—and as of the most recent update, he’s no guarantee to return from the concussion that knocked him out of Week 4. So this is a four-week pace for him (the Lions had a Week 5 bye), and Hockenson is ahead of pace of all put the top two rookies through four weeks. Most of that came in Week 1, so it would be nice to see more consistency out of Hockenson, but in total it’s a good start.