Fantasy football rookies: How this year's class is measuring up through Week 10

Somehow, Murray has been underrated so far as a rookie. He’s topped 20 fantasy points five times in 10 games and only really had one disaster game. He’s over 50 points in his last two games combined. And he’s ahead of the paces set by guys like Dak Prescott, Andrew Luck, and Jameis Winston in recent years. A hot finish, and Murray could find himself in the conversation with the Cam Newton/Robert Griffin III types atop the list.

Unfortunately, it appears this is where the ride ends for the Minshew train, as the Jaguars announced before their Week 10 bye that the eligible-to-return Nick Foles would take the starting job back from Minshew. The rookie did more than enough in his starting stint to earn himself a few years of a career at a bare minimum, and no one should be surprised if he has another starting job someday.

Jones has three big fantasy days: against the Buccaneers, Lions, and Jets. His other starts have all been bad-to-extremely-bad. And the common bond among the teams he’s fared well against? They all have bad defenses. He’s one of the most opponent-sensitive players in the league. Jones has a tough-ish schedule coming up, but in Weeks 15-16 he faces Miami and Washington, so maybe Daniel Jones can win you your playoff matchups.

At the moment, Jacobs is the only rookie running back really worth discussing in historic terms, and even he is far from the top of that conversation. Jacobs has been a very good running back so far this year, but his lack of receiving work keeps him from climbing too high on the PPR leaderboards. If he can find a bit more success in that department down the stretch, he’ll start climbing this list.

Montgomery leapfrogged Miles Sanders in this space since our last update, in part because Sanders had a bye in Week 10, in part because Montgomery had a monster Week 9 before a very down Week 10. The Bears rookie has been faring better of late, but he’s still overall a fantasy disappointment on the season, and will need to show some flashes down the stretch.

Sanders has played all nine Eagles games this year and is averaging under 8.5 carries per game. His value in recent weeks has been buoyed by his receiving (he has 3-4 receptions in each of his last five games), but all in all, his upside is very capped by the presence and success of Jordan Howard.

Quietly, Metcalf has taken over the top spot among this year’s rookie receivers (and he doesn’t even play his Week 10 game until Monday night). He’s scored 5 times on the year, has averaged 7.0 targets across the last four games, and he has 13 end-zone targets on the year. He’s not among the elite rookies of recent vintage, but he’s climbing the list.

As Metcalf climbs, McLaurin has fallen. He had 5 total touchdowns and more than 80 yards per game through his first five outings (six weeks) this year, but over Washington’s last three games, McLaurin had 89 total yards and no scores. Obviously he’s being held in check in large part by an awful offense around him, and the future is still bright for the Ohio State product, but he’s only on the fringes of the fantasy conversation right now. 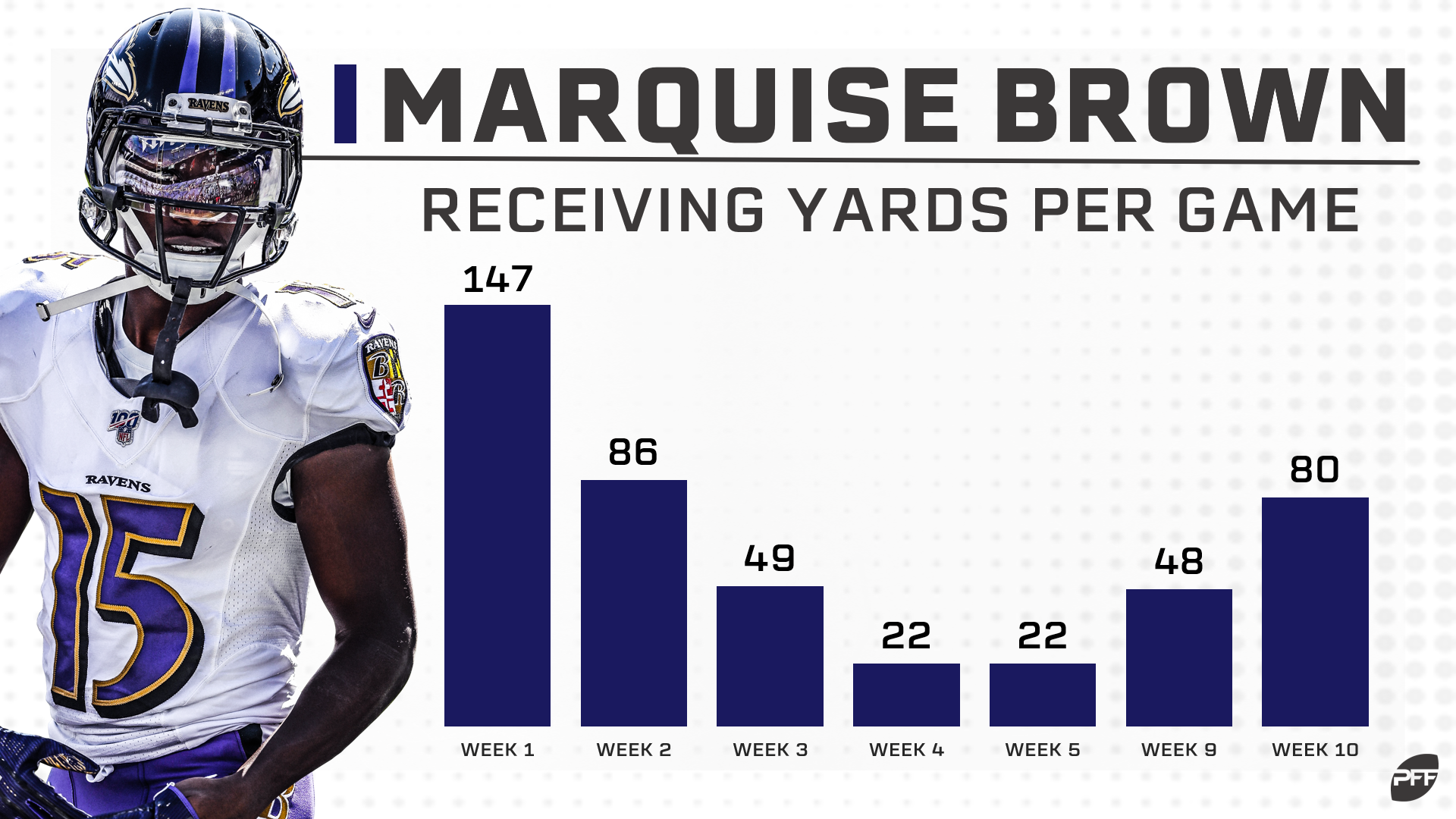 Brown is a guarantee for 140-plus yards in his next game. Okay, not really, but the Ravens rookie has bounced back from some low games. His problem is that the Ravens and Lamar Jackson target tight ends more than any team in the league, and while he’s the No. 1 receiver, it means less with Baltimore than it does for any other team. He’s a big-time boom-or-bust option.

Across his last four games, Hardman has one game with no catch, and 1 or 2 catches in the other three. That’s not great. On the other hand, he has a touchdown in each game he has a reception in that span. Hardman’s at best the No. 5 option in his offense, so he’s never going to see a huge workload as long as the rest of the offense is healthy, but he clearly has upside.

On the plus side, Hockenson has started to accumulate yards again. He went six games between Weeks 2 and 8 with no more than 32 yards in a game, but has passed that in each of his last two. On the negative side, those two games have featured 56 and 47 yards with no scores, so it’s not like he’s exactly lighting things up. He’s a low-upside desperation play at tight end.

Fant has seen 13 targets in two games since Emmanuel Sanders was traded, and had his best game as a pro the last time we saw him, going for 115 yards and a score. He’s still well off pace with the best rookies of the recent era, but things are on the upswing.