Robinson should be a target monster in Chicago

JACKSONVILLE, FL - NOVEMBER 13: Allen Robinson #15 of the Jacksonville Jaguars catches a pass against the Houston Texans during the game at EverBank Field on November 13, 2016 in Jacksonville, Florida. (Photo by Mike Ehrmann/Getty Images)

Though the NFL free agency period hasn’t technically begun, a big name is already off the market, as WR Allen Robinson is expected to sign with the Chicago Bears for a three-year deal worth a reported $42 million. Robinson immediately slots in as the No. 1 option in Chicago where he’ll be paired up with young signal-caller Mitchell Trubisky in the new-look Bears offense under head coach Matt Nagy.

Robinson is the forgotten name in the trio of 2016 fantasy football disappointments that also include DeAndre Hopkins and Todd Gurley. Unlike the other two players, Robinson didn’t have a chance to bounce back last season, as he suffered a torn ACL on just his third snap of the season. While the injury and his 2016 performance aren’t ideal, Robinson will be just 25 years old when the season starts.

One of the biggest breakouts of 2015, Robinson racked up 1,400 yards and 14 touchdowns on 80 catches. He finished the year as the No. 4 wideout in standard scoring and sixth in PPR formats. Regression hit hard in 2016, and Robinson came crashing back to earth with just 883 yards and six scores. This was certainly disappointing, but fantasy expectations may have been too high for Robinson considering his lofty numbers were all but guaranteed to decline.

Now two seasons removed from his big year, Robinson’s fantasy luster has faded. Prior to the news of his impending deal with the Bears, he was coming off the board as the No. 21 wide receiver, which is an ADP around the fourth-/fifth-round turn. Given his landing spot, that ADP shouldn’t shift much in the coming weeks, and could remain relatively stable throughout the offseason. 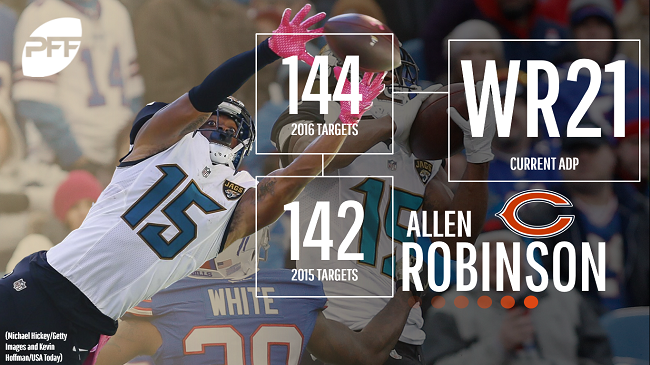 The question is whether or not Robinson can offer value in that draft range. Putting the pieces together, we know that Robinson fits the bill as a target monster. These receivers average at or near 10 targets per game. In 2015, Robinson saw 142 targets and followed that up with 144 in 2016. With essentially minimal competition for targets in Chicago, he’s a good bet to see a similar workload in 2018.

In addition to Robinson, the Bears have former first-rounder Kevin White, who has logged more hours in the trainer’s room than the Bears’ training staff. Cameron Meredith, who is also coming off a torn ACL, was tendered at the original level. That means he could potentially sign an offer sheet elsewhere, but could also stay put. There are also rumblings about the Tarik Cohen playing a Tyreek Hill role in the offense.

None of these players are a threat to Robinson’s workload, so the biggest question mark is how Trubisky will fare in Nagy’s offense. As an Andy Reid protege, it’s expected that Nagy will run a similar scheme to what we’ve seen in Kansas City. The Chiefs used the most RPO concepts in the league last season, a fact that bodes well for Trubisky given his frequent use of RPOs at North Carolina. That being said, it’s tough to expect a dramatic leap forward in Year 2. Still, Robinson should see enough volume to produce WR2 numbers, and his upside makes him very appealing at his current ADP, especially in best-ball formats.