Why you're too high on Chris Godwin

The hype candidate is an annual tradition in fantasy football. This year, Chris Godwin is one of those players. But you know what? You’re probably going to draft Godwin too high this year.

There’s no denying the fact that Godwin is in a better situation than he was last year. In 2018, Godwin was essentially the Bucs’ No. 4 receiver with Mike Evans, DeSean Jackson, and Adam Humphries manning the top three spots. Yet despite being somewhat buried on the depth chart, Godwin broke out and finished as the No. 24 fantasy wide receiver. With Jackson and Humphries out of the mix, Godwin is all but guaranteed to see his role increase, but herein lies the problem.

Perception and reality can be two very different things in fantasy football. Given Godwin’s position on the Tampa depth chart, there’s a widespread perception among the fantasy football public that he’s going to take a massive step forward. New Bucs head coach Bruce Arians fanned these flames at the NFL owners meeting when he said “I think Chris Godwin is going to be close to a 100-catch guy.”

Let’s be clear that if Godwin catches 100 balls, he’s worth the hype. Godwin is currently coming off the board as the 20th wide receiver as a late-fourth-round pick in DRAFT best ball drafts. The lowest finish from a wideout who caught at least 100 balls last year was Stefon Diggs at No. 11 among wide receivers. So Godwin would be a steal at his current ADP if he’s able to reach that plateau. 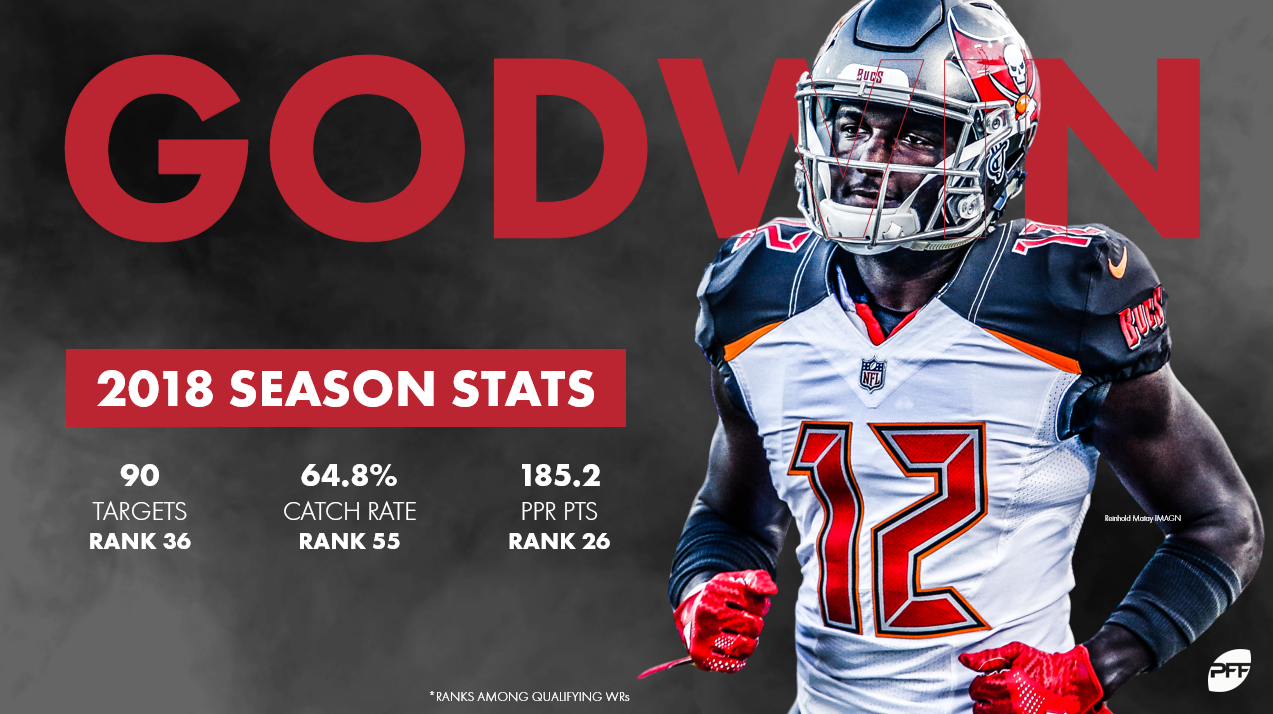 But that’s much easier said than done. Last year, there were only eight wide receivers who topped 100 catches. And none of those players is named Mike Evans. In fact, Evans hasn’t topped triple digit catches for a single season in his career. His best effort came in 2016 when Evans put up 96 catches.

Tampa, we have a problem.

If the Buccaneers’ top target isn’t a strong bet to hit 100 catches, what makes us think their No. 2 receiver can hit that mark? Sure, it isn’t completely unprecedented for a team’s No. 2 to out-catch the No. 1. Last year, JuJu Smith-Schuster racked up 111 catches, which was seven more than Antonio Brown (of course, Brown played one fewer game). But the likelihood of this occurring isn’t very probable.

But let’s just say in theory that Godwin does catch 100 balls. In order for him to do so, that would require roughly 161 targets, given Godwin’s career catch rate of 62%. Even an increased efficiency of 70% would still require 143 targets. Last season, only four wide receivers had 161-plus targets and just seven wideouts topped 143.

Godwin finished last season with 90 targets, which tied for 36th among wide receivers. For him to see the necessary workload to hit triple-digit catches, Godwin would have to see anywhere from a 59% to a 79% increase in his target workload depending on his efficient. Any way you slice it, that’s a massive jump.

But let’s just say he does see that increase in volume. In his five years in Arizona, Bruce Arians offenses average 589.6 passing attempts per season. That means anywhere from a 24 to a 27% target share for Godwin. Last year, the Bucs running backs combined for 14% of the team’s targets, which is a fair expectation for this season. Tampa also has two strong pass-catching tight ends in Cameron Brate and O.J. Howard. That duo could feasibly account for 25% of the team’s targets.

We’re now at 64% of Tampa’s shares if we give Godwin a 25% share. Evans is still the heavy favorite to be the top target, so we’ll give him 1% more than Godwin at 26%. That leaves us with just 10% to distribute among the rest of the Bucs wideouts. Sure, the likes of Justin Watson, Breshad Perriman, and Bobo Wilson aren’t going to strike fear in opposing NFL defenses, but 10% simply isn’t enough. Even without upgrading in the draft, the Bucs Nos. 3-5 receivers are likely to see at least 15% of the team’s targets.

The math just doesn’t add up. With this estimate, we come in 5% over. And when we look through the target shares, there’s one player who’s seeing a larger-than-likely share: Godwin. If we subtract that extra 5% from Godwin’s share, we get a far more reasonable 20% share for Godwin. That translates to 118 targets, which is still a healthy 31% increase from last season.

For Godwin to catch 100 balls on that sort of workload, he’d need to put up a Michael Thomas level of efficiency and catch nearly 85% of his targets. I won’t say that can’t happen, but the likelihood is extremely slim. Godwin’s NFL career catch rate of 62% would translate to 73 catches. Even with an increased efficiency to 70%, Godwin would max out at 82 catches.

There’s no disagreement that Godwin is an exciting young player who is poised to take a step forward in his third professional season. But 100 catches is a far-fetched expectation. The hype surrounding Godwin has forced him up into the fourth round of best ball drafts, which is simply too high. Godwin is fine as a fifth-round selection and is a value any later than that. Keep this in mind when you build out your draft boards. That will help you avoid spending too much draft capital on Godwin.