It's NFL draft season, and with that comes a lot of excitement about success for both real and fantasy football. Some of that is short-term excitement and some of it is long-term, but it’s excitement.

Short-term excitement is great! Everybody remembers, say, Jonas Gray’s four-touchdown game or that famous Matt Flynn outing. But sometimes even when we’re on the lookout for the dangers of the small sample size, we underestimate. Alex Smith drew plenty of sleeper buzz in 2018 after his QB4 2017 season and the move to Washington, then regressed heavily. Guys have fluke seasons all the time — please remember Peyton Hillis.

So today, we’re broadening our sample size. These are the best fantasy producers (both in total and on a per-game basis) over the last two seasons. Who have had the most productive two-year runs? And what do those numbers mean for fantasy in 2019? 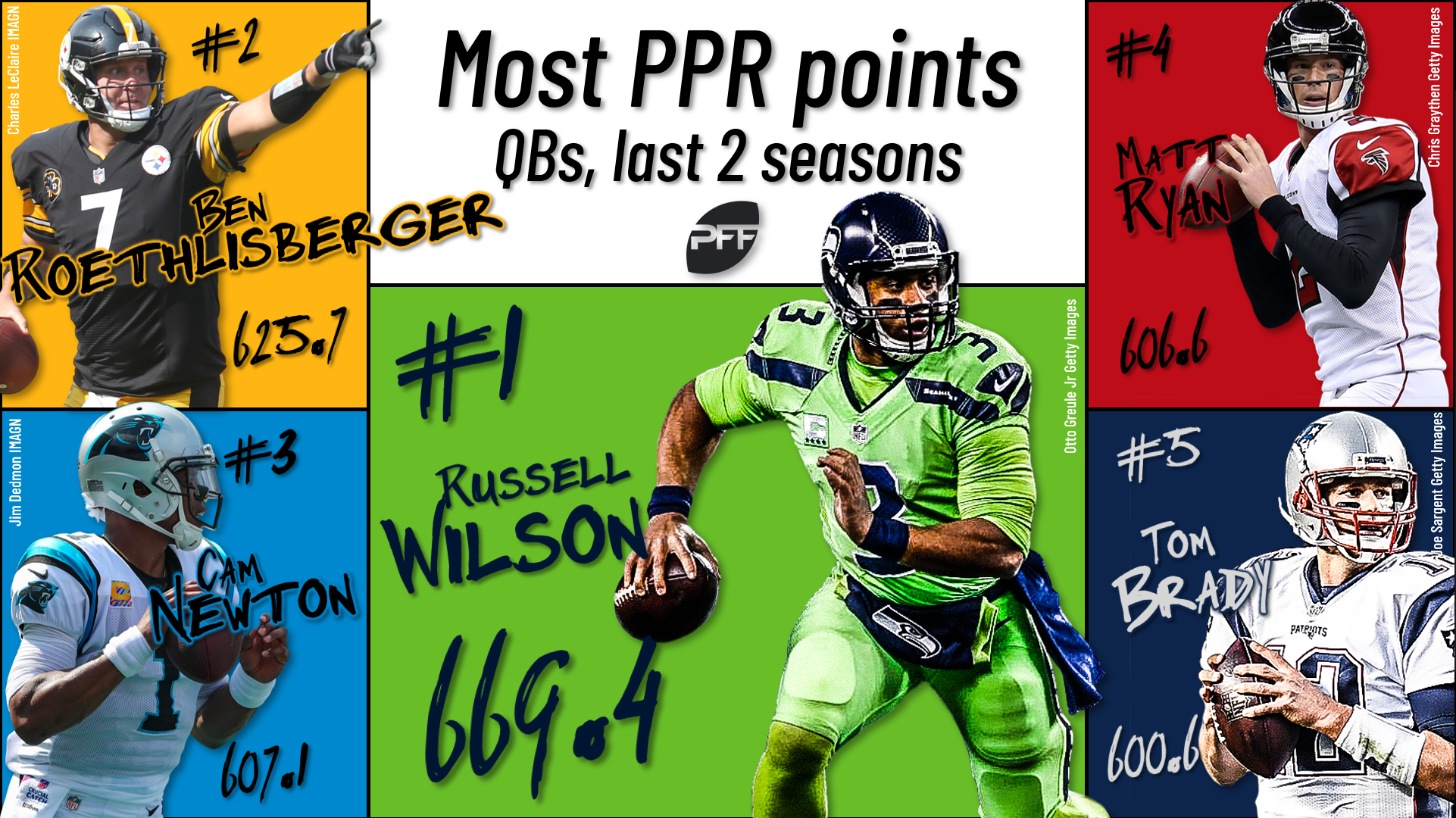 The most interesting thing, to me, is that there isn’t a single quarterback who has been top-five each of the last two years — it was a total turnover at the top of the charts. As a result, the two-year top-five is made up of the top three quarterbacks from 2017 (Wilson, Newton, Brady) and two of the top three from 2018 (Ryan, Roethlisberger), with Mahomes’ dominant season the other top-three season.

Also notable here is the quarterback completely absent from this chart. Aaron Rodgers was hurt for a big chunk of 2017 and disappointed in 2018, but the end result is that for whatever reason Rodgers has only one top-five season in the last four years and two in the last six.

It’s only fitting that Newton and Ryan are so close to one another given their respective recent histories.

It feels almost like cheating to have Mahomes make it, but the point is to have players whose points were accumulated in both years and, well, Mahomes did play in 2017. Watson’s ridiculous average in 2017 helps him to a solid second-place, and unlike the raw totals, his appearance does give us one repeat top-five guy.

On a per-game basis, Wentz has been a very strong quarterback the last two years, but his injury issues have kept his raw totals in check.

Fitzpatrick’s average in 2018 was pretty ridiculous considering he was benched two different times, but he’s always good for a huge game or two in any given year. 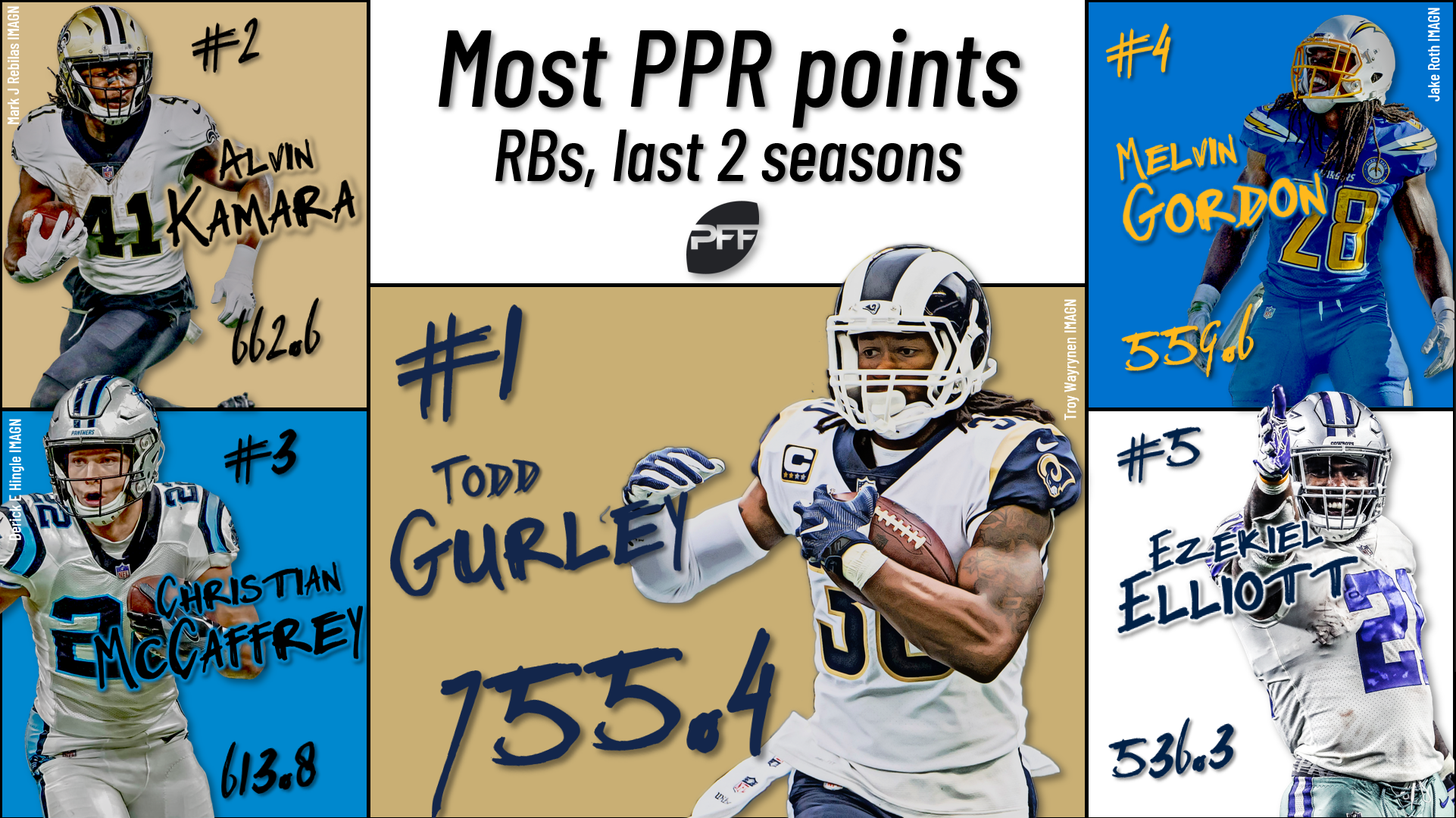 Over the five-year period 2013-2017, Bell’s 2016-2017 was the only time a running back repeated as a top-five PPR back. So of course we had two repeaters in 2017-2018, with Gurley and Kamara cracking the top both years. Gurley’s two-year run is especially dominant, as he’s 90 points ahead of second-place Kamara and more than 140 ahead of third-place McCaffrey.

Had he played in 2018, Bell would have only needed a below-average season for his standards to make the two-year list. He could have averaged 12 points per game across a 16-game schedule and cracked the two-year top-five.

The one-game minimum cuts Bell and Barkley from this group, but it helps Elliott, who missed six games to suspension in 2017. Interestingly, he averaged more points per game in 2018 than 2017, but he didn’t make the most recent top-five because a lot of running backs had even higher averages.

Gurley remains ridiculous. He led the league in fantasy points per game in consecutive years and has the two-year PPG average by 4.5 points. That’s destroying the field. 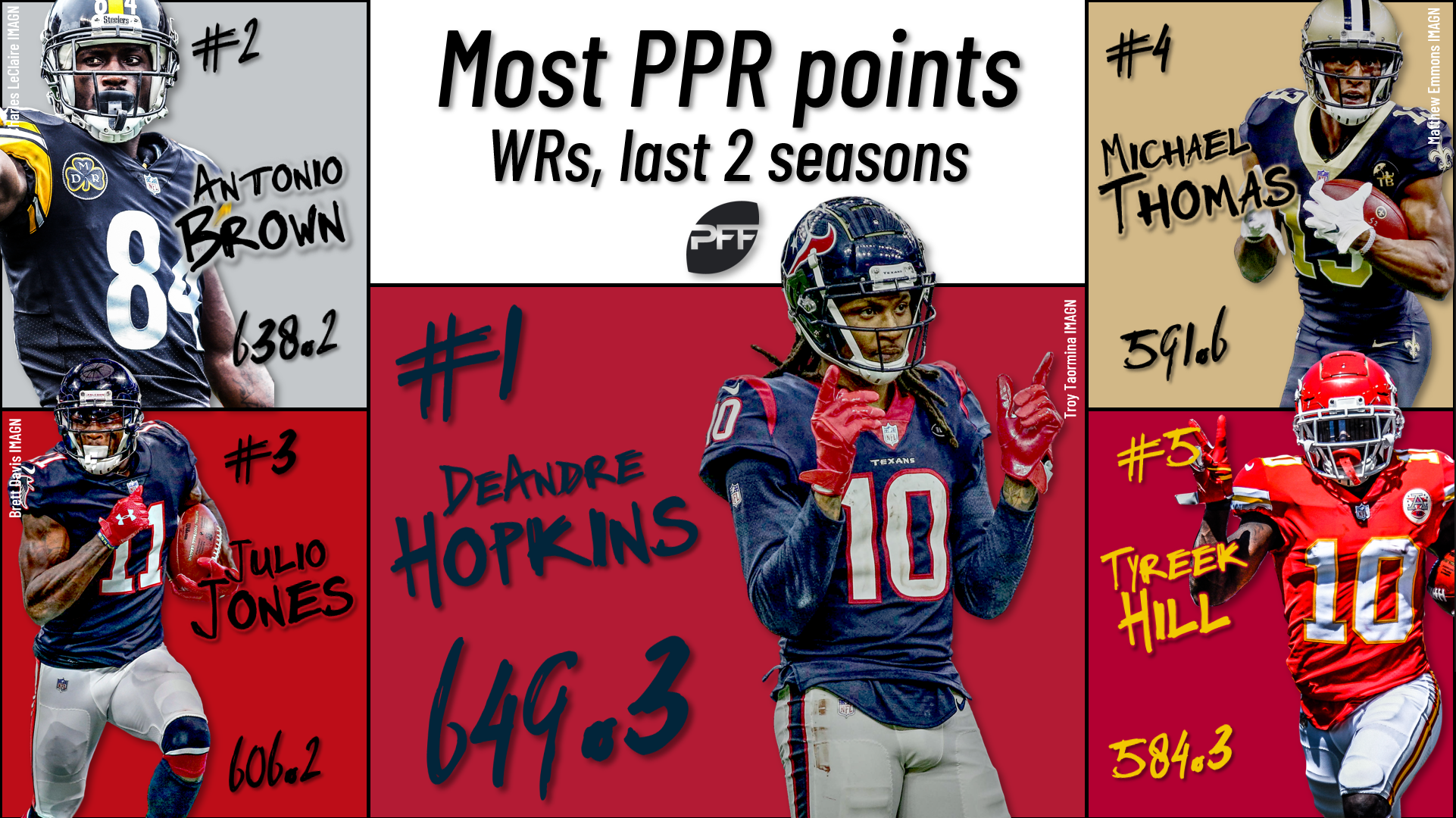 Hopkins led the position two straight years, so it’s only logical he’d lead in the two years combined. But considering that, the face that he’s only 11 points ahead of Brown is notable. In fact, Hill in fifth place is closer to first at wide receiver than second-place Kamara was to the first-place running back. There’s an elite class at wide receiver and they’re all pretty close to one another.

Because wide receivers tend to be less injury-prone than the other skill position players, these charts bear a lot of resemblance to one another. The notable difference is Beckham, who cracked the top five in 2017 and makes the two-year list. Overall, though, you aren’t learning much here that you wouldn’t learn from raw totals. 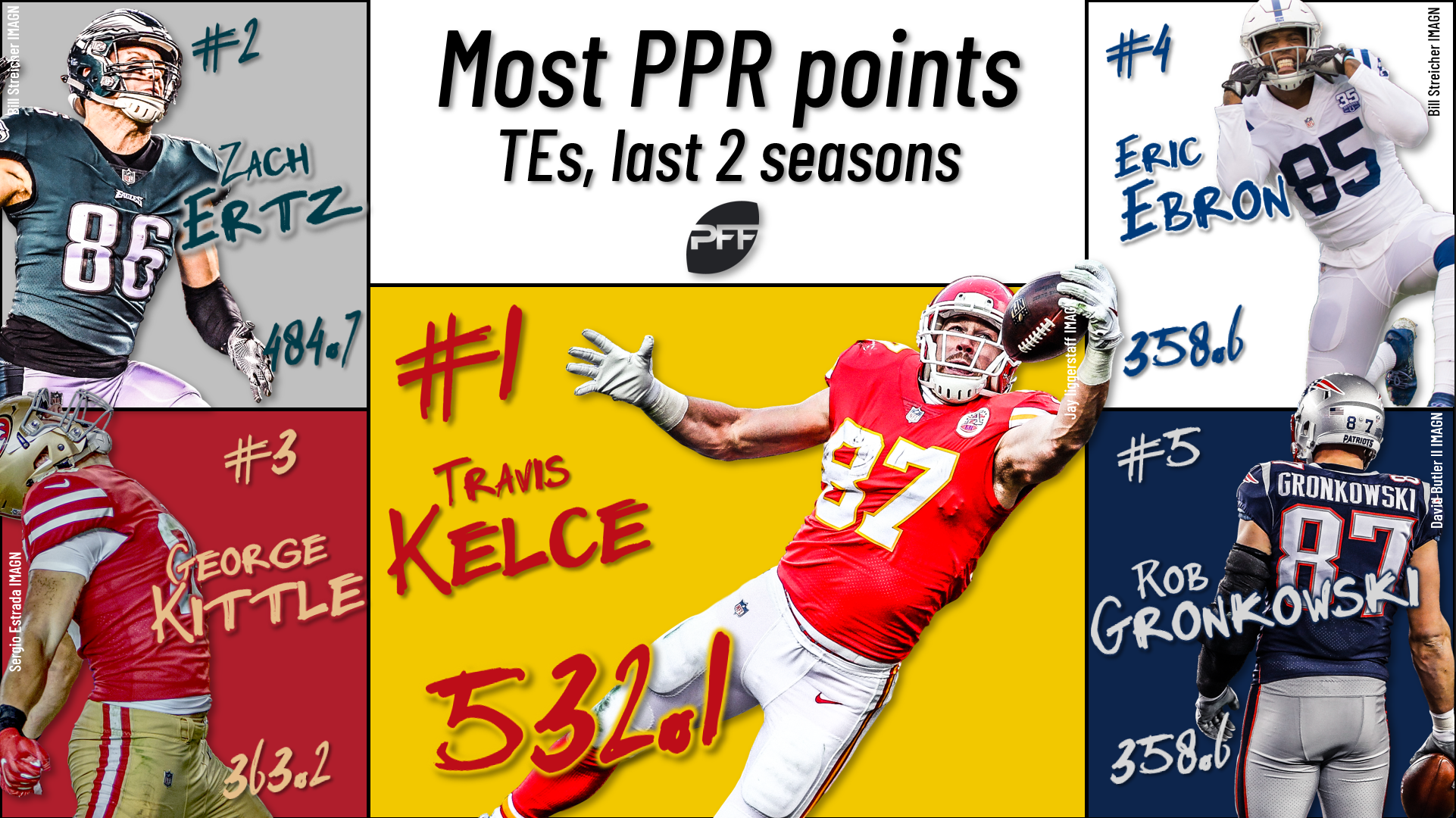 Gronkowski’s strong 2017 plus his underwhelming 2018 is exactly equal to Ebron’s disappointing 2017 and his breakout 2018. I don’t know what that means, exactly, but it’s interesting. And with the top-four across the last two years exactly matching the top-four from 2018 alone, basically what we are seeing is the changing of the guard at a struggling position.

There is a little more interest in the PPG rankings across the two seasons, if only because Engram cracks the list after missing some games to injury. Still, the disparity between Kelce and Ertz (and Kittle if you don’t want to discount him for his rookie season being included) and the field at tight end is dramatic.

I wrote two years ago about the inconsistency of kickers — at the time, the only kickers in 10 years who were finished in the top five in back-to-back years were Steven Hauschka in 2013-14, David Akers in 2008-10, and Gostkowski in 2007-09 and 2011-16. Since then, Gostkowski did it again in 2017, but exactly one name has been added to the list — Tucker, each of the last three years. You’re drafting your kicker last because you just can’t guess what’s going to happen.

The Jaguars and Bears led each of the last two years, but it’s actually the Rams who lead over the two-year stretch. Considering the strength of that offense, and the productivity of the defense, the Rams are the best full roster for fantasy purposes in the league, and it’s not especially close.