If you want to win a DFS tournament, it’s essential to leverage PFF’s DFS ownership projections as close to lock as possible. Knowing what your competitors are going to do ahead of time provides an edge that simply not enough DFS gamers take advantage of.

Last week's process landed on Tom Brady as the quarterback to target, along with his under-rostered wide receivers Mike Evans and Antonio Brown for Week 5 DFS. It was a massive success at a relatively low rostership that led to over 100 DraftKings points between three players.

Hitting on Brady was a big win for the quarterback process — identifying him as the primary pay-up option was based largely on targeting quarterbacks who ranked highly in expected fantasy points per game facing other quarterbacks that hit the same criteria. 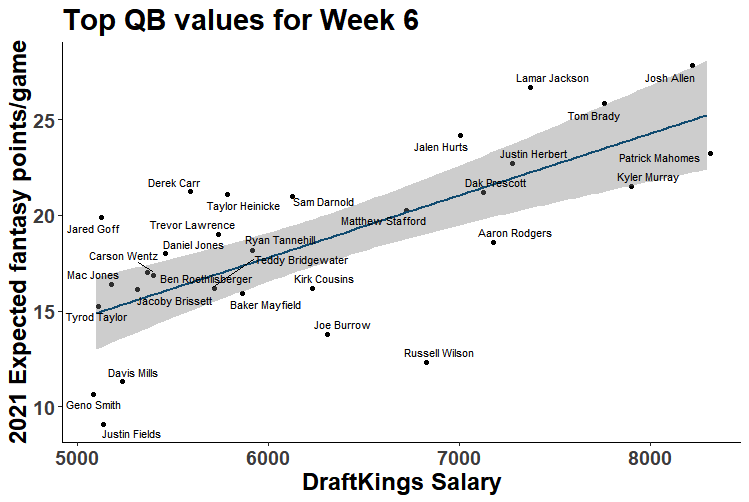 Mahomes ($8,300) is the primary pay-up target in a prime bounce-back spot.

Although it may seem obvious to double-stack him with Travis Kelce/Tyreek Hill against the Washington Football Team, not everybody will do so. He was sub-10% rostered when he went nuclear in Week 1 versus Cleveland and sub-8% in a similar spot against the Eagles.

Washington has allowed the second-most fantasy points to quarterbacks this season. Going with Mahomes seems like a no-brainer in tournaments, even if he does garner a lot of rostership.

However,  I doubt we see Mahomes as the most popular option with Herbert and Jackson squaring off after each scored over 45 fantasy points in Week 5. Recency bias is a sick drug, so anticipate the majority of DFS players saving $1,000 in salary to pay down for either Jackson ($7,400) or Herbert ($7,300).

If you are mixing up quarterback exposures, I’d opt for Jackson over Herbert. His stacking partners are cheaper because of the release of salaries prior to Monday Night Football, and Jackson has the rushing equity that Herbert doesn’t have in his arsenal.

Stafford and Prescott round out the other expensive quarterbacks, with the Los Angeles Rams signal-caller my slightly preferred option.

Dallas has transformed into a run-first offense with the league’s second-highest run rate on early downs (59%). Prescott can deliver with efficient play, but DraftKings PPR scoring makes it tougher for his receivers to hit high-end outcomes on less volume. The Patriots rank fourth in run-play rate faced on early downs this season, so anticipate operation ground and pound when Big D visits Gillette Stadium.

Stafford, on other hand, has a great matchup versus the New York Giants, who rank 30th in pressure rate, 26th in touchdown passes allowed and sixth in fantasy points allowed to quarterbacks this season.

The Rams’ 29-point implied team total is the second-highest on the main slate. Stafford should easily find fantasy production.

The top pay-down option is none other than WFT quarterback Taylor Heinicke at $5,800.

Kansas City ranks dead last in fantasy points allowed to quarterbacks this season, setting the stage for Heinicke to be a potential bright spot for fantasy managers who are suffering through bye weeks or poor fantasy quarterback play.

He ranks fourth in the NFL in scramble yards, which has helped stabilize his fantasy floor. And no team has allowed more raw quarterback rushing yards (236) than the reigning AFC champions.

Joe Burrow doesn’t fit the prerequisite or desired expected fantasy point total but deserves recognition in a potential blow-up spot versus the Detroit Lions. The lowly Lions rank last in explosive pass play percentage and yards per pass attempt allowed this season. Unsurprisingly, the Bengals own the easiest matchup on the week per PFF’s strength of schedule tool.

Burrow and company also increased their pass-play rate on early downs to 63% in Week 5 — a massive uptick from the stagnant 46% they were throwing through the first four weeks. As a result, Burrow notched season-highs in drop backs and pass attempts, even when excluding overtime. 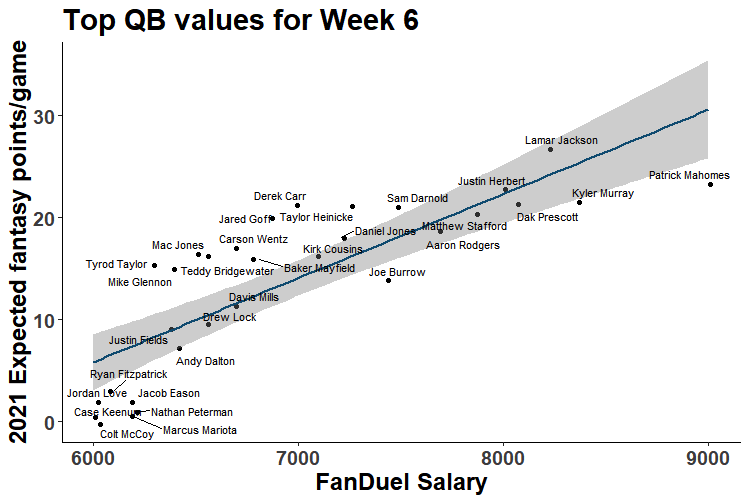