If you want to win a DFS tournament, it’s essential to leverage PFF’s DFS ownership projections. Knowing what your competitors are going to do ahead of time provides an edge that simply not enough DFS gamers take advantage of.

What you’ll unearth is plenty of players across all positions that rank high in PFF’s fantasy projections and fantasy football rankings but boast low rostership percentages. So, contrary to popular opinion, you don't need to galaxy-brain sub-1% rostered players that don’t stand a chance to sniff a winning lineup.

Instead, identify the 5-10% rostered players that show out in high-value opportunities, rankings, expected fantasy points and usage to build the backbone of your GPP lineups.

That’s what the winner of the DraftKings NFL $1.6M PLAY-ACTION contest did when he/she built a team that featured five players with sub-10% rostership in addition to a 5.5% rostered Buffalo Bills unit versus a rookie quarterback.

Related content for you: Biggest fantasy football mismatches in Week 5 via Ian Hartitz

The top-six quarterback fantasy finishes from Week 4 came from just three games. Carolina Panthers–Dallas Cowboys, Kansas City Chiefs–Philadelphia Eagles and Atlanta Falcons–Washington Football Team. This suggests that not only should your target quarterback be set up for success, but the opposing quarterback should be as well, as it creates a shootout environment that results in a fantasy point surplus. 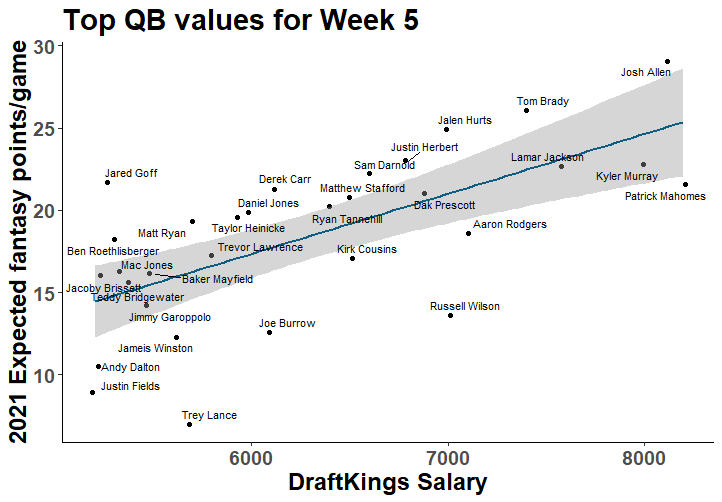 Above the $6.5K price tag, Brady, Hurts and Prescott are the priority pay-up options. Brady and Hurts rank inside the top-three in expected fantasy points per game this season.

TB12 is the first quarterback to target because he’s overdue for some positive regression after vastly underperforming versus expectation. He should have 4.7 passing touchdowns but has just thrown one over the past two weeks.

The Miami Dolphins have allowed the second-most receptions of 20-plus air yards, and Brady leads the NFL in PFF passing grade (98.5) on deep pass attempts.

Every time I’ve rostered Hurts as my cash quarterback, it’s been a winning week. With fantasy finishes of QB4, QB10, QB10, QB5, QB12, QB1, and QB11 in Hurts’ last seven full games played, no quarterback has a safer floor/ceiling combination than the Eagles mobile passer.

Stack him up with DeVonta Smith, who ranks seventh in the NFL in air yards and leads Philly with a towering 21% target share, in GPPs.

The Cowboys’ second-ranked 29.5-point implied team total against the Giants is also extremely intriguing, as it suggests that Prescott and company should find success. New York has allowed the ninth-most fantasy points to quarterbacks this season.

The Giants should also keep the Dallas offense aggressive, as Jones is also set up to produce at a high level. The Cowboys have allowed the fourth-most fantasy points to opposing signal-callers this season, setting the stage for the $6K-priced quarterback to continue his hot fantasy streak. The Giants passer is the fantasy QB9 — 23.3 fantasy points per game — and is PFF’s second-highest graded quarterback through the first month of the season.

Jones is the second-best quarterback value based on his fantasy football projection/salary combination, which is calculated by PFF’s DFS optimizer.

Lawrence flashed his rushing upside in Thursday’s loss to the Cincinnati Bengals. He rushed eight times for 36 yards and one score while running the zone read five times. In the previous three weeks, Lawrence ran the zone read just three times.

This is a strong indication that the rookie’s rushing numbers are here to stay, which significantly increases his weekly floor. At worst, it makes it easier to get behind rostering him versus the Tennessee Titans in Week 5. Entering Week 4, Tennessee allowed the third-most fantasy points to the quarterback position.

Titans-Jags has sneaky shootout written all over it, and Lawrence is a contrarian way to get access to the fun.

Trey Lance gets you exposure to the high-powered Arizona Cardinals offense, which will undoubtedly put up big numbers behind the $8K-priced Kyler Murray. But that’s why going with Lance at a fraction of the cost makes sense, as Arizona's scoring will provide Lance with plenty of opportunities to score as well.

Just last week, Lance scored 20.4 fantasy points — two passing touchdowns, 41 rushing yards — in just one half of football in an offensive game plan designed for Jimmy Garoppolo. So just imagine his fantasy upside with a full week of install in a game with a 50-point projected total. Chills.

Those who played Justin Fields in cash in his first start might be hesitant to go back to a rookie signal-caller, but the scenarios are completely different. The 49ers will build their offensive game plan around Lance’s strengths as a passer and rusher, something the Chicago Bears have not done yet.

The Cardinals rank last in yards per carry allowed and 31st in PFF run-defense grade. Conversely, they are strong against the pass, ranking fifth in PFF coverage grade and first in explosive pass percentage allowed. Anticipate the 49ers running the ball with their rookie quarterback who is making his first start on the road. The rushing alone will easily make Lance worth the $5,700 investment.

The Green Bay Packers–Cincinnati Bengals contest has the second-highest projected total on the main slate, so play Joe Burrow in tournaments. The second-year quarterback has been on fire, boasting a 92.0 PFF passing grade, 10.4 yards per attempt, a 135.0 passer rating and a 78% completion rate — all of which rank first or second among quarterbacks. His real-life efficiency finally resulted in fantasy points, as he hung a season-high 22.3 fantasy points on the Jacksonville Jaguars last Thursday night.

The Packers rank 29th in passing touchdown rate allowed this season, so Burrow should continue to play at a high level. 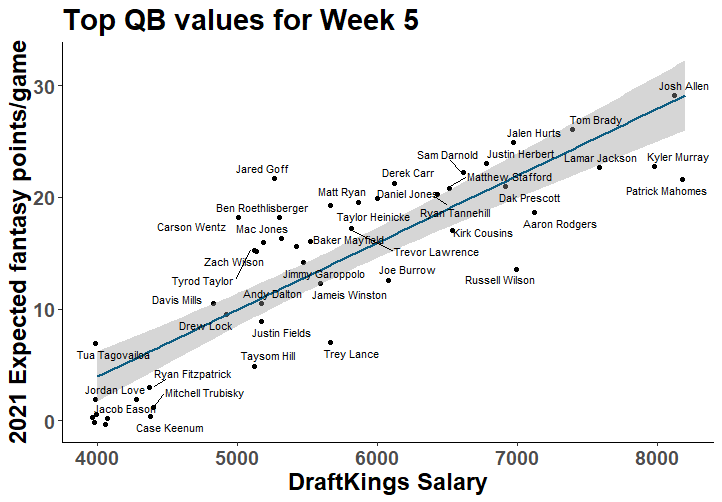