Leverage PFF’s Week 18 fantasy football rankings and DFS ownership projections as close to lock as possible. Knowing what your competitors are going to do ahead of time provides an edge that simply not enough DFS gamers take advantage of. Focus your attention in cash formats on high-rostered value players and pivot to lower-rostered ceiling players in GPPs.

And to further improve the process, I have updated the expected fantasy points per game graphics to numbers from just the past six weeks to get a better grasp of what players have done more recently.  Be sure to also read my Week 18 start/sit column, as that contains key information regarding each team’s motivation heading into the regular-season finale.

Enjoy the last DFS main slate of the 2021 season! 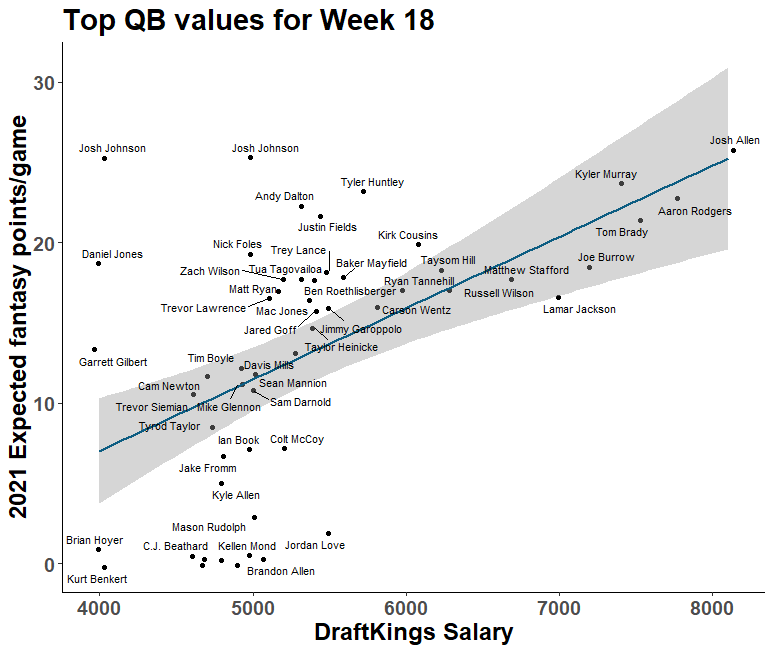 In terms of matchups that are projected to be high-scoring based on the offensive pace of play over the last six weeks: Philadelphia-Dallas (11th vs. second), Tampa Bay-Carolina (first vs. 16th), Baltimore-Pittsburgh (second vs. 13th) and Raiders-Chargers (12th vs. eighth)

The top games for stacking are BAL-PIT, SF-LAR and SEA-ARZ while the Tampa Bay Buccaneers and Buffalo Bills should have dominant victories.

Brady has a much tougher matchup against the Carolina Panthers, who rank second in the fewest yards per play allowed this season (4.9), so I would prefer to pay the extra $600 to get up to Allen. Brady was held under 15 fantasy points the last time he played Carolina.

However, if he projects to be on the lower end of rostership, I’d aggressively target him because he can easily be double stacked. Mike Evans and Rob Gronkowski are his clear-cut pass-catching targets with Antonio Brown removed from the picture.

Murray doesn’t have DeAndre Hopkins, but that has not limited him in terms of fantasy scoring over the last two weeks. He’s averaged 22.2 fantasy points per game due, in part, to his 118 rushing yards. The mobility Murray offers at home versus the Seattle Seahawks defense, which allowed over 300 passing yards to Colt McCoy in Week 11, makes the Arizona Cardinals‘ starting quarterback a screaming value.

Arizona's offense should rely on Murray more than usual with both running backs Chase Edmonds and James Conner nursing injuries.

I’ve played Stafford over the past two weeks more than I would care to admit, but he is hard to ignore in such a good spot. The San Francisco 49ers rank seventh in pass-play rate faced since Week 10, ensuring that the Los Angeles Rams’ path to points comes through the air.

It only took 17 weeks, but the Seahawks finally let Russell Wilson ($6,300) cook. The Seattle Seahawks‘ quarterback lit up the Detroit Lions for four touchdowns en route to a 51-29 blowout in what may have been his final home game in Seattle.

I expect Wilson to go out with a bang versus the Cardinals in his final game with the Seahawks. The Cardinals have allowed the third-most fantasy points per game to quarterbacks over the last four weeks.

Hill has averaged 19.4 fantasy points in his four starts to go along with 11 rushing attempts in each contest. His rushing upside in combination with a must-win plus-matchup versus the Atlanta Falcons — No. 3 in rushing yards and first in rushing attempts allowed to quarterbacks this season — make the New Orleans Saints quarterback a no-brainer Week 18 play. 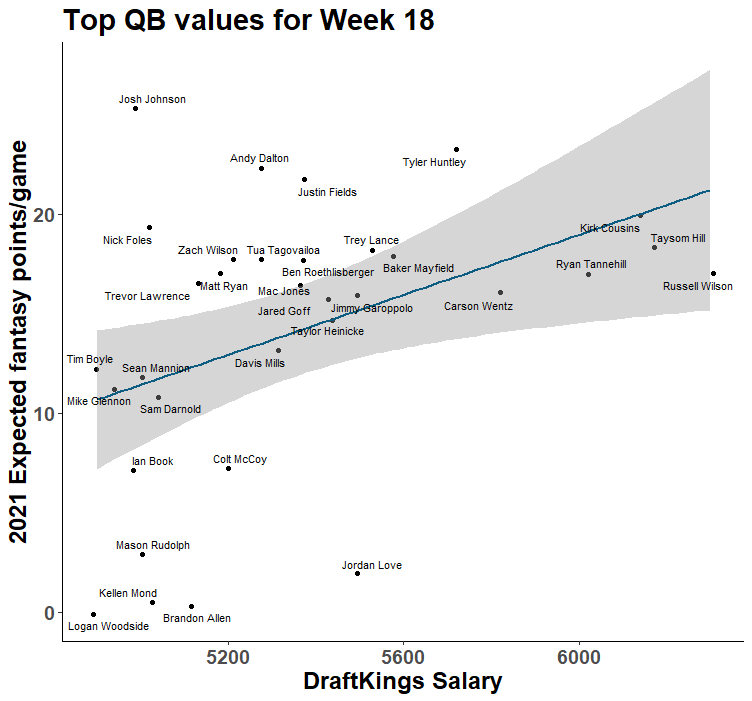 Lance came through as the cash-game quarterback last week, throwing for 249 passing yards and two scores. Things looked bleak in the first half, but the rookie put together a solid second-half performance — 76.5 PFF passing grade — to end the day with 20 fantasy points. He actually left some points on the table after his rushing touchdown was called back due to a ticky-tack penalty. His matchup this week is tougher than last, but his rushing ability always gives him a chance to overcome any defense.

Fields has finished as a top-12 fantasy quarterback in his past four completed games. I was all over his 180.5 passing yards prop in Week 15, which he smashed into oblivion by throwing for 285 yards against the Minnesota Vikings defense.

The rookie quarterback is averaging 56 rushing yards per game over his past six completed contests, putting him firmly back among the top-15 fantasy quarterbacks in a rematch versus the Vikings, who rank sixth in fantasy points allowed to quarterbacks this season. Bears head coach Matt Nagy said that if Fields is healthy, he will start in Week 18 over Andy Dalton.

Chicago ranks fifth in plays per game since Week 12, so it could push the Vikings offense into a higher gear to create a sneaky shootout environment that may be overlooked. 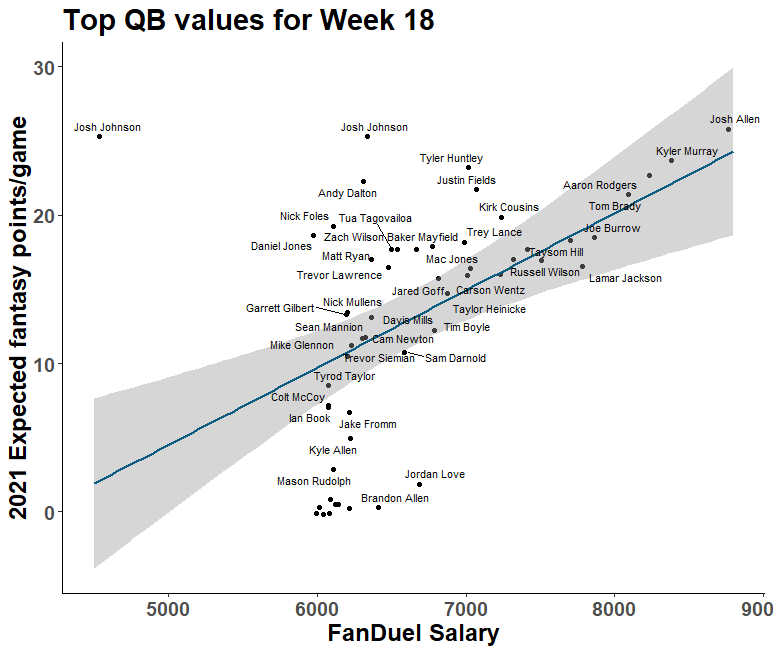