Leverage PFF’s Week 16 fantasy football rankings and DFS ownership projections as close to lock as possible. Knowing what your competitors are going to do ahead of time provides an edge that simply not enough DFS gamers take advantage of. Focus your attention in cash formats on high-rostered value players and pivot to lower-rostered ceiling players in GPPs.

Last week’s process led to Tyler Huntley in large-field GPPs, which was the optimal strategy to taking down big tournaments.

In terms of matchups that are projected to be high-scoring based on the offensive pace of play over the last six weeks: Baltimore Ravens–Cincinnati Bengals (first vs. 15th) and Philadelphia Eagles–New York Giants (fourth vs. 22nd) are the only ones that stand out on the main slate.

The top games for stacking are MIN-LAR and CIN-BAL. Offensive onslaughts include Eagles, Chargers, Buccaneers and Chiefs. 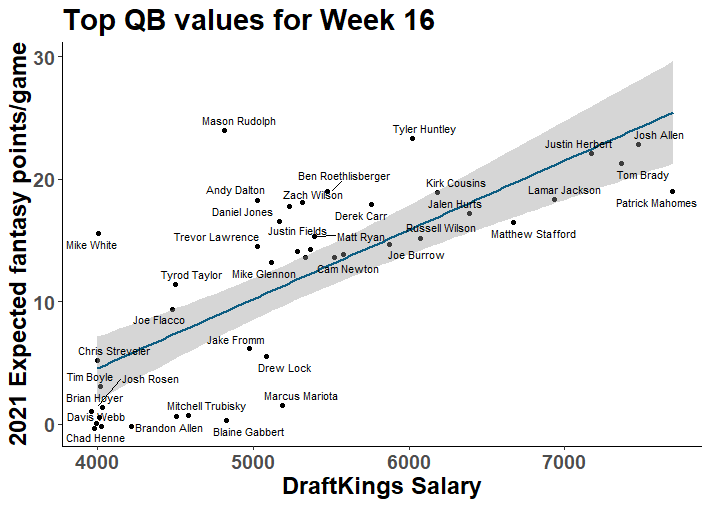 The Los Angeles Chargers quarterback ranks second in fantasy points per game (23.9) since Week 10 and faces a Houston Texans defense that ranks No. 1 in PFF’s strength of schedule tool for Week 16.

Stafford hasn’t been nearly as good — 19.7 fantasy points per game — but his matchup versus the Minnesota Vikings makes him cash viable. The Vikings defense has allowed the most passing yards to opposing quarterbacks over the last four weeks.

However, Hurts is the optimal cash-game play, as he has been almost all season. Any concerns about Hurts’ lingering ankle injury were put firmly to rest on Tuesday night, as the Eagles quarterback rushed eight times for 38 yards, including three times inside the five-yard line.

He is back on the QB1 fantasy radar this week against the Giants. The second-year quarterback rushed for 77 yards the last time he took on New York. 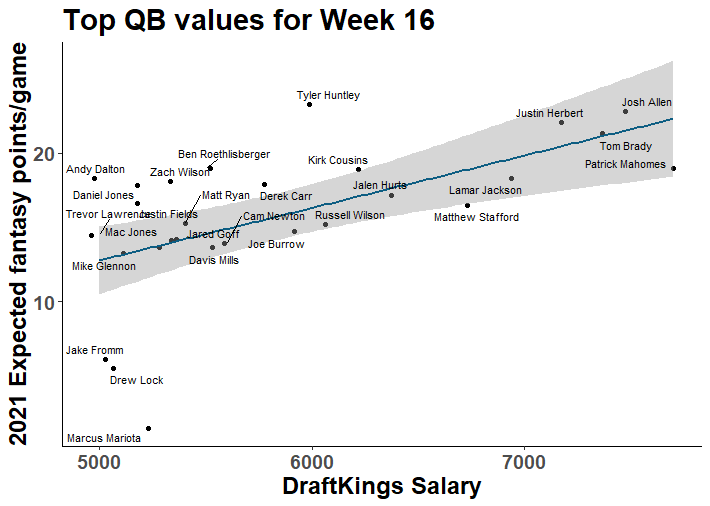 In tournaments, I like paying up for Tom Brady at $7,400 at reduced rostership based on his tough on-paper matchup. His stacking partners are easy to identify, making him perfect for GPPs. The same goes for Patrick Mahomes at $7,700, assuming he gets his top-tier weapons back off the COVID/reserve list.

Lamar Jackson ($6,900) also piques my interest if he is healthy enough to play against the Bengals, who rank sixth in passing yards allowed to QBs over the last four weeks.

Death, taxes and Joe Burrow double stacks. PFF’s No. 1-graded quarterback (89.2) has been unusually boom-or-bust in his past five games, throwing for 300-plus yards in two contests while finishing with fewer than 200 passing yards in his other three games. He’s finished as the QB14 in fantasy points per game over that span despite the ups and downs.

Week 16  is also a prime spot for Burrow to go off, as he shredded the Ravens defense for over 400 passing yards en route to a QB2 overall finish back in Week 7. The Ravens secondary is currently more banged-up than it was earlier in the year, as Aaron Rodgers had zero issues ripping through the unit for 268 passing yards and three touchdowns in Week 15.

Justin Fields is my other targeted quarterback who is priced under $6K in DFS. The rookie has finished as a top-12 fantasy quarterback in his past four completed games. I was all over his 180.5 passing yards prop last week, which he smashed into oblivion by throwing for 285 passing yards against the Vikings defense.

The Bears' mobile quarterback is averaging 56 rushing yards per game over his past six completed contests, putting him firmly back among the top 12 fantasy quarterbacks in a plus-matchup versus the Seattle Seahawks, who rank third-worst in passing yards allowed over the past four weeks. 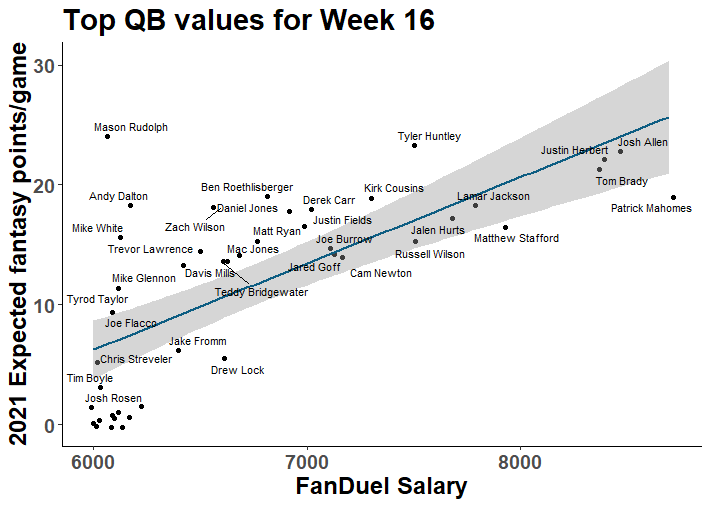