Leverage PFF’s Week 17 fantasy football rankings and DFS ownership projections as close to lock as possible. Knowing what your competitors are going to do ahead of time provides an edge that simply not enough DFS gamers take advantage of. Focus your attention in cash formats on high-rostered value players and pivot to lower-rostered ceiling players in GPPs.

Last week’s process led to Joe Burrow double stacks, which was the optimal strategy to take down big tournaments. Cincinnati Bengals-Baltimore Ravens was one of the few games last week that projected to be extremely fast-paced, and stacking it was the key to victory. 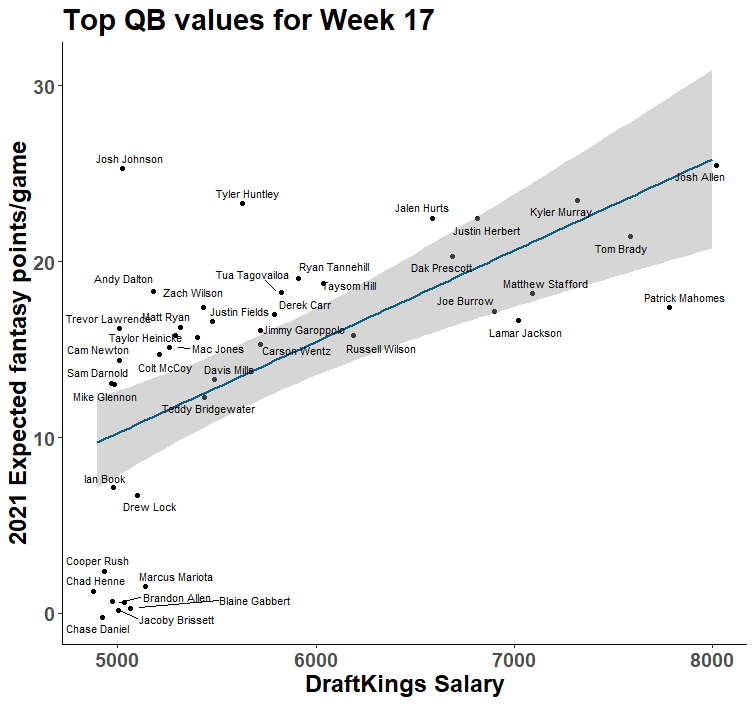 In terms of matchups that are projected to be high-scoring based on the offensive pace of play over the last six weeks: Tennessee Titans–Miami Dolphins (first vs. seventh), Dallas Cowboys–Arizona Cardinals (second vs. fifth), Baltimore Ravens–Los Angeles Rams (second vs. 15th) and Philadelphia Eagles–Washington Football Team (sixth vs. 14th) are ones that stand out on the main slate.

The top games for stacking are TEN-MIA, DAL-ARI and BAL-LAR while the teams that should have been days on offense include the Tampa Bay Buccaneers and Buffalo Bills.

Allen should rip the Atlanta Falcons to shreds because their recent “success” in pass defense is due to the lack of talent they have faced at the quarterback position. Tim Boyle, Jimmy Garoppolo and Cam Newton aren’t in the same stratosphere as Allen from a passing perspective, so, of course, none of them crested 250 passing yards against the Falcons.

They did, however, force the Falcons defense to rank 31st in explosive pass rate and 25th in yards per pass attempt, showing their true colors as PFF’s 30th-ranked defense and 32nd-graded pass-rushing unit.

The Bills also throw at the highest rate when winning by seven or more points, so Allen will continue to sling the ball even amid a blowout Buffalo win. That’s why he is my No. 1-ranked quarterback and the highest-rostered QB for championship weekend.

Brady is right behind Allen at No. 2 for similar reasons. He owns PFF’s No. 1 quarterback matchup based on strength of their opponents and should have zero problems dicing up a New York Jets secondary that ranks last in yards per attempt (8.0) this season. The Buccaneers rank second in throw rate when winning by seven or more points so don’t assume Brady slows down even with a lead.

However, Tampa Bay did lean more on the run last week with a lead, creating an argument to fade the Bucs' passing game in tournaments in favor of their rushing attack. No team has faced a higher run rate from opposing offenses than the Jet.

Murray ranks second in expected fantasy points per game over the last six weeks (23.5), but it’s fallen the last two weeks without DeAndre Hopkins (21.1). His rushing ability will be his saving grace because I don’t expect him to have an amazing day passing the ball against a red-hot Dallas Cowboys defense. Dallas has allowed a league-low 63.9 passer rating since Week 10.

Dallas also predominantly runs Cover 1, which Murray has posted just a 69.4 passer rating against (33rd among 46 qualifiers) this season. The Cowboys also rank second in man coverage snaps — a scheme that Murray has recorded just a 75.9 rating (33rd) versus this season.

As one of the league’s most electrifying runners, Murray can score plenty of fantasy points on the ground, but why pay up for him in tournaments when there are a plethora of mobile quarterbacks at cheaper costs?

I’d rather get my GPP exposure to DAL-ARZ through Prescott and his pass-catchers. Arizona’s defense is heading in the opposite direction of Dallas', as it ranks 31st in passing touchdown rate since Week 10.

Stafford laid an egg for fantasy managers in season-long semifinals, finishing last week as the QB24 — his worst fantasy performance of the 2021 season. Nonetheless, Stafford has bounced back after poor outings — when he has finished a week as QB17 or worse, he has finished the following week as a top-five fantasy quarterback.

A road matchup against a reeling Baltimore Ravens defense looks like the perfect get-right spot for Stafford, as their defense has allowed the most fantasy points to quarterbacks over the last four weeks.

Not to mention Stafford is PFF’s third-highest-graded QB versus man coverage this season (87.5). Baltimore has run the fourth-most man coverage snaps this season. He’s the perfect tournament play to get off a chalky Sony Michel.

The optimal quarterback and my recommendation for cash games to save salary in Week 17 is Trey Lance ($4,800). QB Jimmy Garoppolo has a torn ligament in his right thumb, putting his Week 17 status in doubt, which would slide Lance into his second start of the season against the Houston Texans.

Lance would be an immediate top-10 season-long fantasy quarterback due to his rushing ability. In his lone start back in Week 5, he rushed for 89 yards and scored 16 fantasy points despite zero touchdowns, which just goes to show the value mobile quarterbacks offer with their legs.

Case in point, Lance ranks only behind fellow running quarterback Taysom Hill in fantasy points per dropback this season (0.78). As the top QB-value per PFF’s DFS optimizer, the 49ers rookie quarterback should be a lock-in 50/50s and double-ups.

Hill has scored 26 fantasy points in two of his last three starts to go along with 11 rushing attempts in each contest.

Tagovailoa can expose Tennessee Titans' pass defense. The Titans are a pass-funnel defense, as it has faced the second-highest pass-play rate this season.

The Dolphins already throw at the 11th-highest rate under neutral game script conditions due to their bottom-three run-blocking unit so anticipate Tagovailoa airing the ball out early and often versus a defense that has allowed the sixth-most passing yards on defense this season. In games where the southpaw QB has attempted at least 33 passes, he has averaged 20.3 fantasy points and 22.7 expected fantasy points per game.

The Titans also boast a bottom-three pass-rush unit, suggesting the Miami Dolphins signal-caller will be able to operate from a clean pocket. When unabated by pressure, Tagovailoa owns a top-10 passer rating this season (106.8).

Dolphins-Titans should be one of the faster-paced games on the main slate, making it a sneaky game to stack in tournaments. 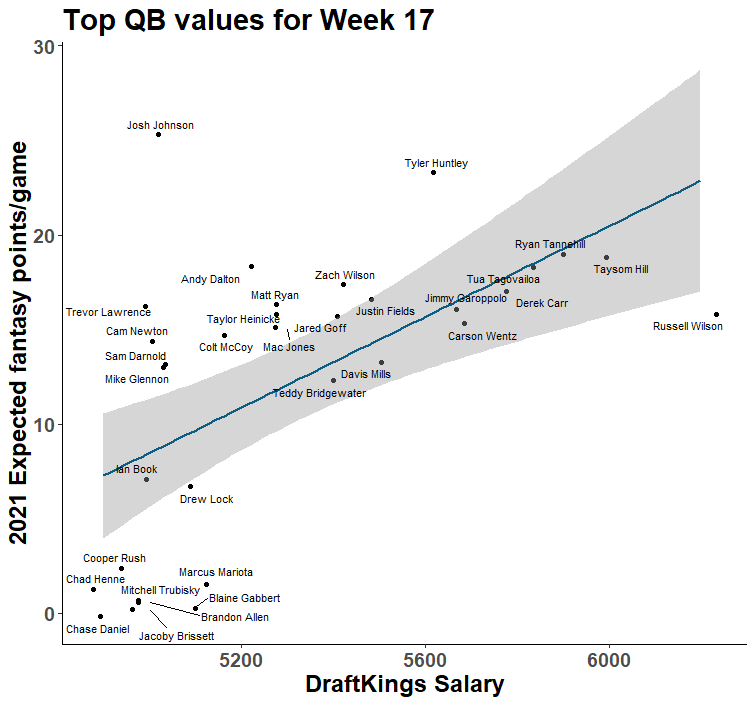 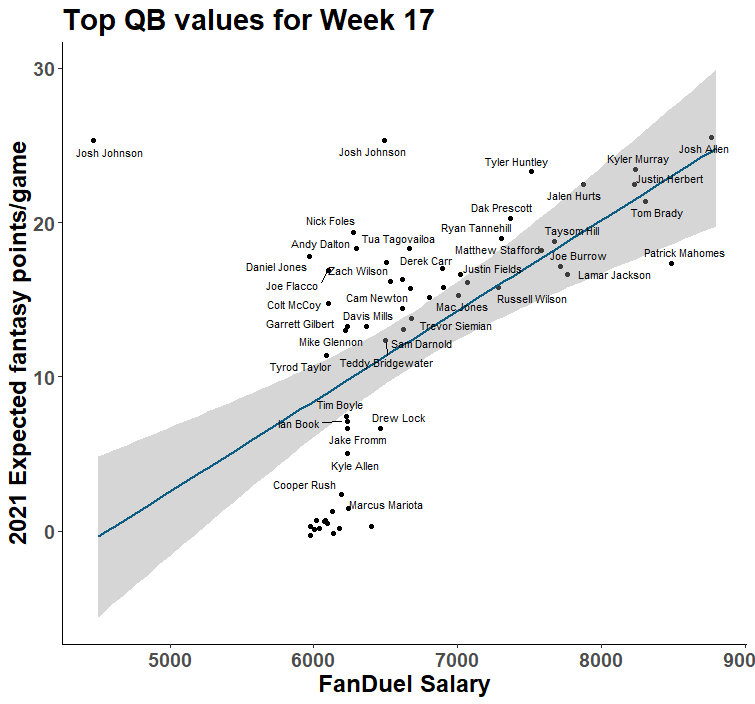