There’s a very specific reason I chose 175 touches as the threshold and not, say, 150. That’s because Kenyan Drake actually performed better in one of these metrics last season, and I felt he was deserving of his own article.

Over the past two seasons, Drake averages 5.0 yards per carry, which ties Mark Ingram for the best rate by any running back with at least 150 carries over this span. That’s impressive, but as I’ve already alluded to, yards per carry doesn’t tell us what Drake did on his own, irrespective of blocking.

Among all running backs with at least 100 carries in a single season in the PFF era, Drake’s 2017 ranks 26th-best in missed tackles forced per attempt (0.22).

In terms of yards after contact per attempt, Drake looked even better, posting our most efficient season ever recorded (4.29). 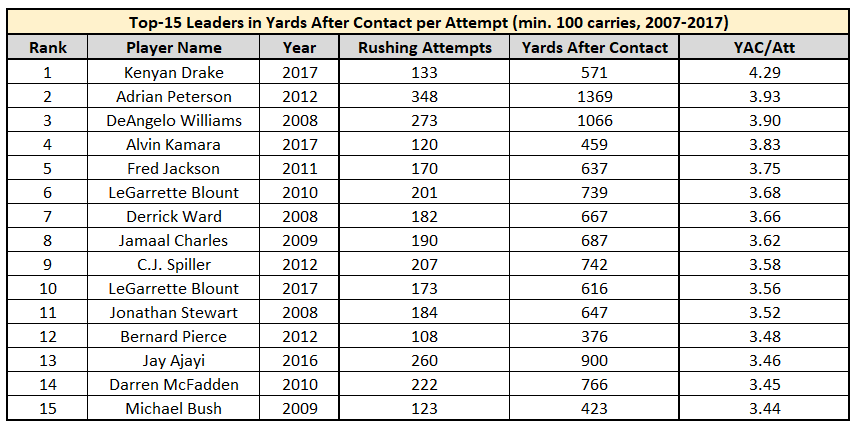 While there are definitely a few running backs on this list who wouldn’t again end a season with such efficient numbers, we are dealing with a small sample size here (only 100 carries), and that’s a concern for Drake as well. Does Drake actually have the potential to be a fantasy league-winner in 2018, or is this just small sample variance?

Last season, Jay Ajayi was traded to Philadelphia following a 40-0 loss to the Ravens in Week 8. The trade was widely panned by NFL analysts and fans of Miami, but by the end of the season, I imagine both teams were happy with the deal.

Immediately following the trade, Drake was used in a committee alongside Damien Williams, failing to eclipse 15 touches in a single game for four consecutive weeks – until Williams suffered an injury in Week 12. Over the final six weeks of the season, Drake ranked eighth among running backs in total fantasy points and sixth in total touches. He would end the season averaging 105.2 yards from scrimmage per game in his six total starts. Drake would also post our single-highest-graded running back game last season, in Week 13 against the Broncos. This was also the first game of his NFL career carrying the ball at least 10 times.

Of course, in these seasons, Gase seems to have indicated a clear preference for a running back used in a bell-cow capacity. Williams is an UFA this year, and the Dolphins (finishing the season 6-10) likely have bigger needs elsewhere that they might not spend big money or waste significant draft capital on a running back this offseason. Although Drake was tremendous when used as a bell cow late last season, 2017 was also the first time in his NFL or college career he eclipsed 100 carries in a single season.

In my current rankings, I have Drake as the 21st running back, which isn’t too far off current ADP (RB24). I’m prepared to push Drake even further up my boards, but will be awaiting a confirmation from Miami’s coaches that they’re prepared to move forward with Drake in a bell-cow capacity.