The best and worst fantasy football matchups of Week 5 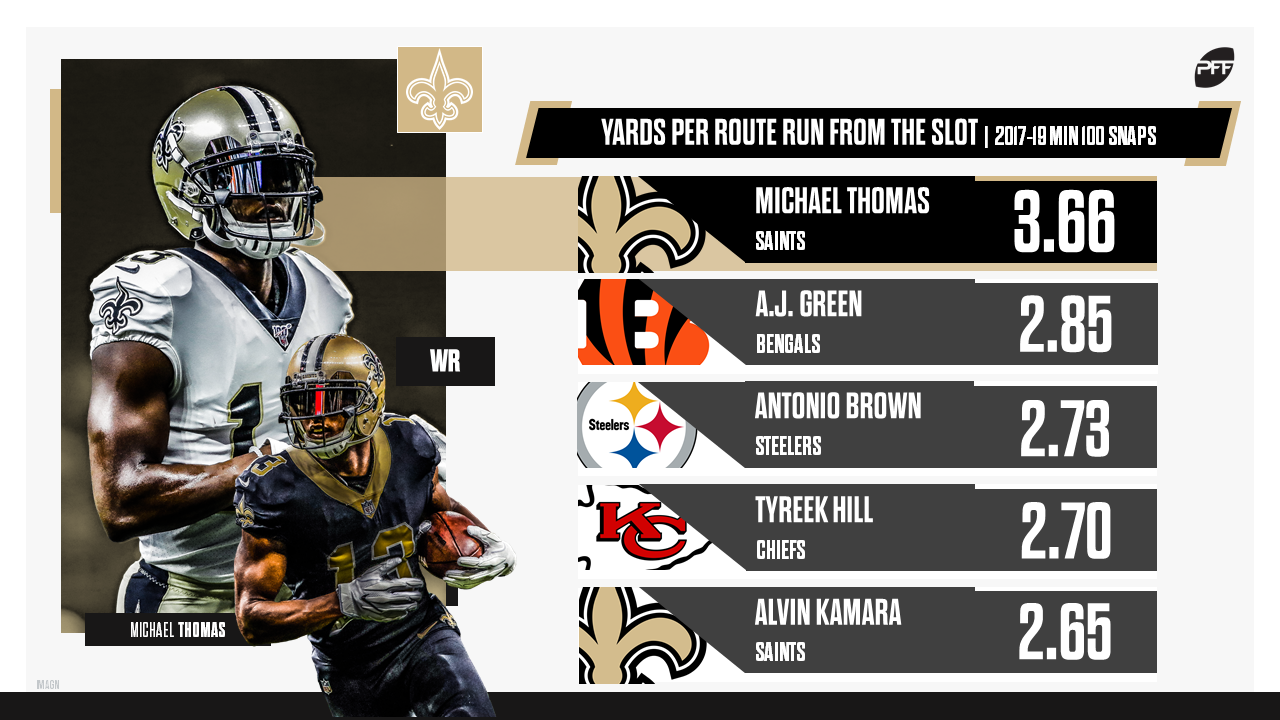 Michael Thomas, WR, New Orleans Saints (vs. Tampa Bay): The breakout Week 4 performances of Cooper Kupp and Robert Woods were extremely predictable (in fact, I predicted them), in large part because the slot is easily the best area to attack the Buccaneers, namely M.J. Stewart. Well, Thomas led the league in slot yards per route run in 2017 (3.63), did it again in 2018 (3.63 again), and is second this year (3.89), putting him at 3.66, putting him almost a full yard ahead of the second-best slot receiver in that time. Giddy up.

Andy Dalton, QB, Cincinnati Bengals (vs. Arizona): The Bengals averaged the third-fewest plays per game in 2018. One of the only teams to average fewer? The Cardinals, second-fewest. This year, under the guidance of Zac Taylor and Kliff Kingsbury, the two teams have risen to 16th and eighth, respectively. That alone helps a quarterback (and entire offense) put up more fantasy numbers. While Dalton could scarcely have been worse Monday against Pittsburgh, he’s still in the top 10 in the league in dropbacks, pass attempts, completions, and yards through four weeks. And for DFS purposes, his ownership percentage will be all but nil.

Mark Ingram, RB, Baltimore Ravens (@ Pittsburgh): If you look at individual performances against the Steelers, no running back really stands out. No individual running back has topped 70 rushing yards against them, and two of the three touchdowns they’ve allowed came to 18-yards-rushing Jeff Wilson. But that’s because they’ve largely faced committees. In Week 1, the running back position for New England as a whole put up 181 yards. In Week 2, the Seattle group had 169 and a score. The aforementioned 49ers managed 236 and those two touchdowns in Week 3. The Steelers relatively shut down the Bengals in Week 4 (82 yards), but then the Bengals didn’t really show up for that game. The Ravens split backfield work in Weeks 1-2 when they won handily, but as the team has hit harder times the last two weeks, Ingram has handled roughly two-thirds of the backfield opportunities.

Larry Fitzgerald, WR, Arizona Cardinals (@ Cincinnati): As resurgent as Fitzgerald’s season has been (he’s the No. 13 PPR receiver through four weeks), he’s actually been reined in by the presence of Christian Kirk, who has drawn more total targets than Fitzgerald (34-33) and more in the red zone (8-5). But now, Kirk is banged up, and if he misses Week 5, that could open up even more production for the veteran against a Bengals team that has allowed three different receivers to have at least 77 yards and a score in a game so far.

Jimmy Graham, TE, Green Bay Packers (@ Dallas): The Cowboys have only allowed one big game to a tight end — Evan Engram’s monster Week 1. Then again (now that we are downgrading Jared Cook), Engram is the only upper-tier tight end the Cowboys have faced. Graham, meanwhile — especially if Davante Adams is out — might not have the upside he once had but he does have his scoring chances; he’s one of 18 players (at any position) with at least four end-zone targets so far. One of the others? Adams, and if he’s out, here’s betting those valuable targets shift to their giant, ex-basketballer tight end.

Dak Prescott, QB, Dallas Cowboys (vs. Green Bay): This is a matchup of “are you the product of your environment?” The Packers were a light-out pass defense in Weeks 1-3 (against Chicago, Denver, and Minnesota) before letting Carson Wentz and the Eagles put up a lot of points in Week 4. Prescott was one of the league’s elite quarterbacks in Weeks 1-3 (against the Giants, Miami, and Washington) before getting positively shut down by the Saints in Week 4. The deciding factor for me? Even as Wentz put up plenty of touchdowns against the Packers Thursday, he only had 160 passing yards. The Cowboys’ route to success Sunday will be through Ezekiel Elliott’s hands, not Prescott’s.

Le’Veon Bell, RB, New York Jets (@ Philadelphia): The Eagles have held No. 1 running backs comically in check so far. Derrius Guice, Devonta Freeman, Kerryon Johnson, and Aaron Jones have combined for 97 rushing yards on 54 carries, a cool 1.8 yards per carry to four guys who were drafted as RB2s or so. And given that the Jets’ quarterback in Week 5 will either be an overmatched Luke Falk or a barely-back-from-mono Sam Darnold, Bell isn’t likely to get much help.

Corey Davis, WR, Tennessee Titans (vs. Buffalo): Davis only has five touchdowns in his two-plus years in the league (itself pretty damning). They came against the Eagles, Patriots, Texans, and Jets (last year) and the Falcons (Week 4). Of that group, only the Patriots had anything approximating a strong group of cornerbacks. Davis is very cornerback-sensitive, and he will likely draw some combination of Tre’Davious White and Levi Wallace Sunday, making him a stayaway. 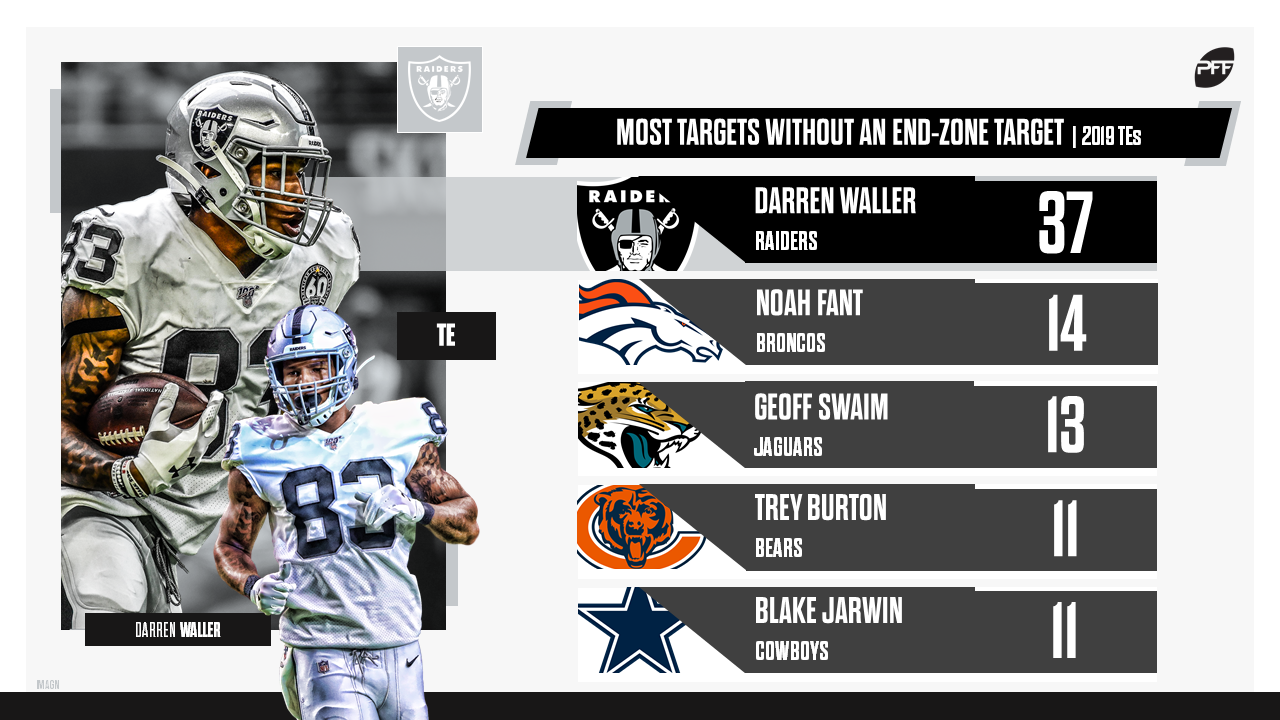 Darren Waller, TE, Oakland Raiders (vs. Chicago in London): For all of Waller’s great virtues this year — he’s near the top among tight ends in targets (37, tied for first), receptions (33, first), and yards (320, third) — he’s not getting much work where it matters most. Waller has only three red-zone targets through four weeks (22 tight ends have more), and he hasn’t yet gotten a target in the end zone. Receptions and yards are valuable, but obviously scoring is the biggest factor, and while you can’t predict touchdowns, a guy who just isn’t getting the chance to score isn’t likely to get many of them. Add in a tough Bears defense and I’m fading Waller in DFS this week.