As we have been preparing for the 2018 NFL Draft this month, we’ve also been reviewing last year’s rookie class position by position and assessing their 2018 fantasy outlooks.

The 2017 draft class was loaded with talent at the position. With a season already under their belts, these youngsters are all players that should be on your fantasy radar for the upcoming season and beyond: 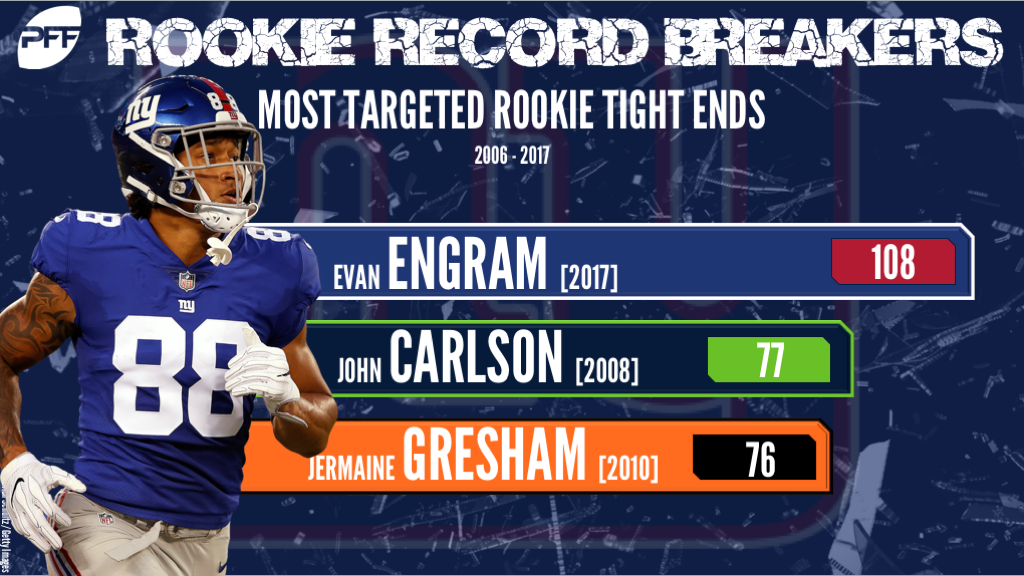 Engram benefited heavily from the injuries around him last year and became a focal point of Eli Manning in the Giants’ passing attack.

His 108 targets, 64 receptions, and 722 receiving yards were the most by a rookie tight end during the PFF era. Engram also had 15 or more PPR points with a score five times over seven contests Weeks 6-13.

With his volume of targets expected to decline, there isn’t much value being offered up for Engram in early drafts. However, he figures to be locked in as a TE1 for the foreseeable future and should offer a very nice weekly floor at the position.

The Bucs invested heavily in Howard when they grabbed him with 19th overall pick in last year’s draft. After getting off to a slow start, Howard heated up down the stretch before missing the last two weeks with an ankle injury.

He managed to net 432 yards and six touchdowns on just 26 catches despite only being targeted 36 times. Over his last eight games he scored five times and averaged 9.9 fantasy points per contest.

His impressive 16.6 yards per reception and 11.1 yards per target numbers opened some eyes, but the fact that Tampa Bay re-signed fellow tight end Cameron Brate to a long-term deal is problematic.

There are many weapons in the Bucs’ passing game and that makes it tough to see Howard getting the targets required to become elite. His talent though should help him to still carve a useful enough role to warrant being on some fantasy rosters.

The Browns gave their offense a major facelift this offseason and there is some buzz around the unit’s potential. Njoku figures to be a big part of the mix.

He targeted 58 times and finished with 32 catches for 386 yards and four touchdowns in his first season. The arrival of Jarvis Landry alone should really open things up for Njoku over the middle and because he’s a solid run-blocker he’s likely to see a large share of snaps.

Njoku graded out as PFF’s 10th-best receiving tight end. He also had the fourth-highest average depth of target (11.6) among all tight ends who played at least 50 percent of their team’s snaps.

A step forward can be expected in 2018, especially if he develops some early chemistry with new quarterback Tyrod Taylor. His current 13.08 ADP makes him a nice low-risk, high-reward investment for those that wait to grab a tight end.

Outside of Evan Engram, which second-year TE do you think will have the best fantasy season in 2018?

Like so many other 49ers, Kittle got a big boost when Jimmy Garoppolo took over under center with two of his best three games of his rookie season coming in the final two weeks. He was fifth in fantasy points at the position in Weeks 15-17.

Kittle became just the ninth rookie tight end over the past decade to reach 500 yards in his debut season as he pulled in 43 of his 61 targets and scored a pair of touchdowns.

The athletic tight end provides some nightmare matchup problems for opposing defenses and look for San Francisco to continue to exploit that further during his sophomore season. His dynasty stock is soaring, but in redraft leagues he’s more of a high-end TE2 entering 2018. 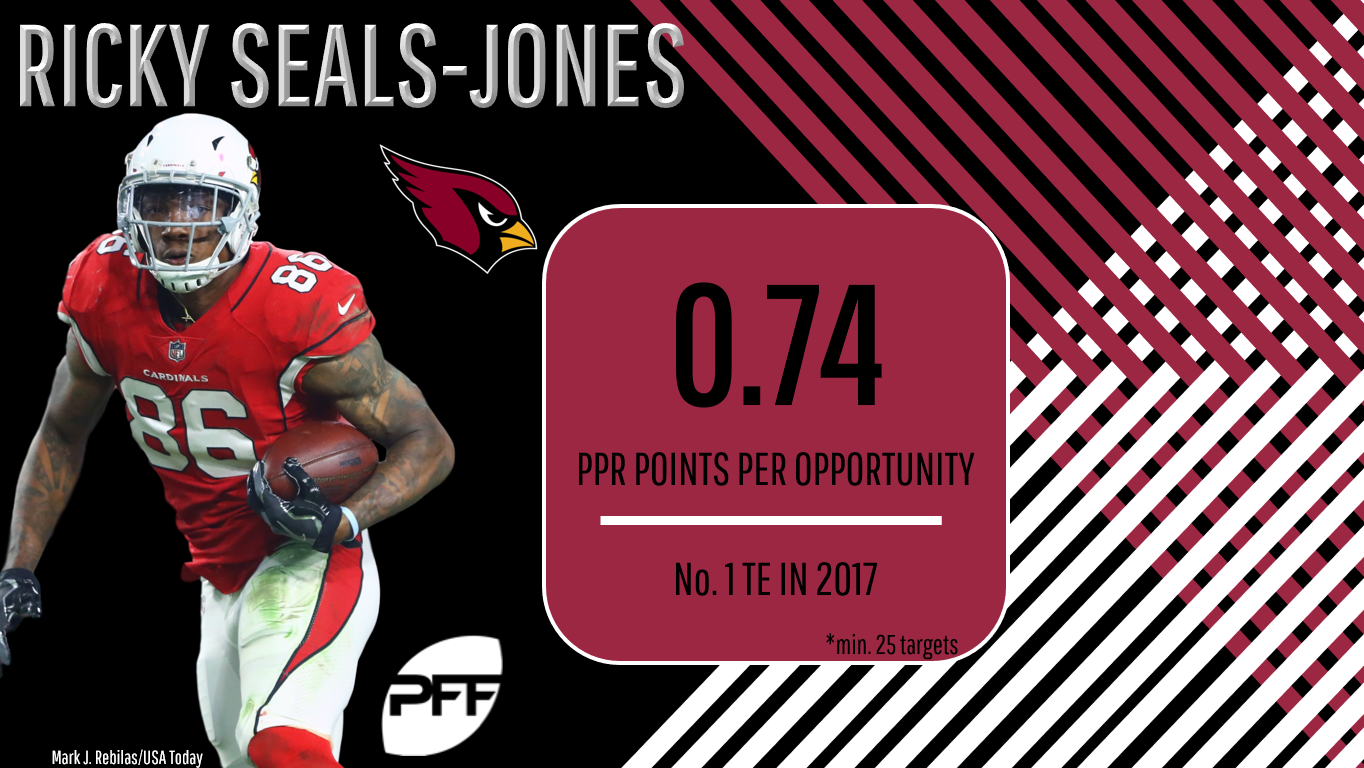 Seals-Jones, a former wide receiver at Texas A&M, could be poised for a breakout in 2018 after flashing some big-play ability (16.8 YPR) as a rookie for the Cardinals.

He only ran 68 routes, but finished with 12 receptions on 28 targets for 201 receiving yards and three touchdowns in 2017. Seals-Jones led all tight ends (minimum 25 targets) with 0.74 PPR points per opportunity last season.

The Cardinals are going through a major transition, but the team’s lack of weapons coupled with the fact that veteran Jermaine Gresham (Achilles) is not expected to be ready for Week 1 should lead to an increased role for Seals-Jones in the season ahead.

Shaheen was the No. 45 overall pick in last year’s draft, but he had his rookie campaign marred by injuries. He finished his first year in the league with just 12 catches on 14 targets for 127 yards and three touchdowns.

The former basketball player looks the part at 6-6 and 270 pounds, but he is still a bit raw. The team’s addition of tight end Trey Burton in free agency on a four-year, $32 million deal definitely didn’t help Shaheen’s value, though.

Expect Shaheen to remain in the mix, but his targets will be limited. He remains a strong hold in dynasty leagues, but owners may want to reserve judgement on his 2018 value until we see how the Bears use the tight ends this summer.

There’s no doubting Everett’s physical ability, but as we saw during his rookie campaign he still has plenty of development that needs to occur for him to become a viable fantasy option.

Everett finished 2017 with just 16 catches for 244 yards and two touchdowns on 30 targets. He showed his ability to make big plays down the field with receptions of 69, 44 and 39 yards.

Playing on a Rams’ team that led the league in scoring last year is a plus and Sean McVay definitely likes to get the tight end involved in his play calling. Everett makes for an intriguing sleeper candidate in deeper formats for the season ahead.