PITTSBURGH, PA - SEPTEMBER 17: Dalvin Cook #33 of the Minnesota Vikings rushes against the Pittsburgh Steelers in the second half during the game at Heinz Field on September 17, 2017 in Pittsburgh, Pennsylvania. (Photo by Justin Berl/Getty Images)

Last April, there was plenty buzz about the crop of running backs in the upcoming NFL draft class — and rightfully so. Many members of the Class of 2017 became big parts of fantasy backfields as rookies. It’s one of the reasons why the position is so loaded heading into this year’s fantasy drafts.

As we brace for the 2018 NFL Draft later this month, we’re reviewing last year’s rookies position by position and assessing their 2018 fantasy outlooks. Last week I kicked off the series with a look at the second-year quarterbacks, this time around we focus on the running backs. 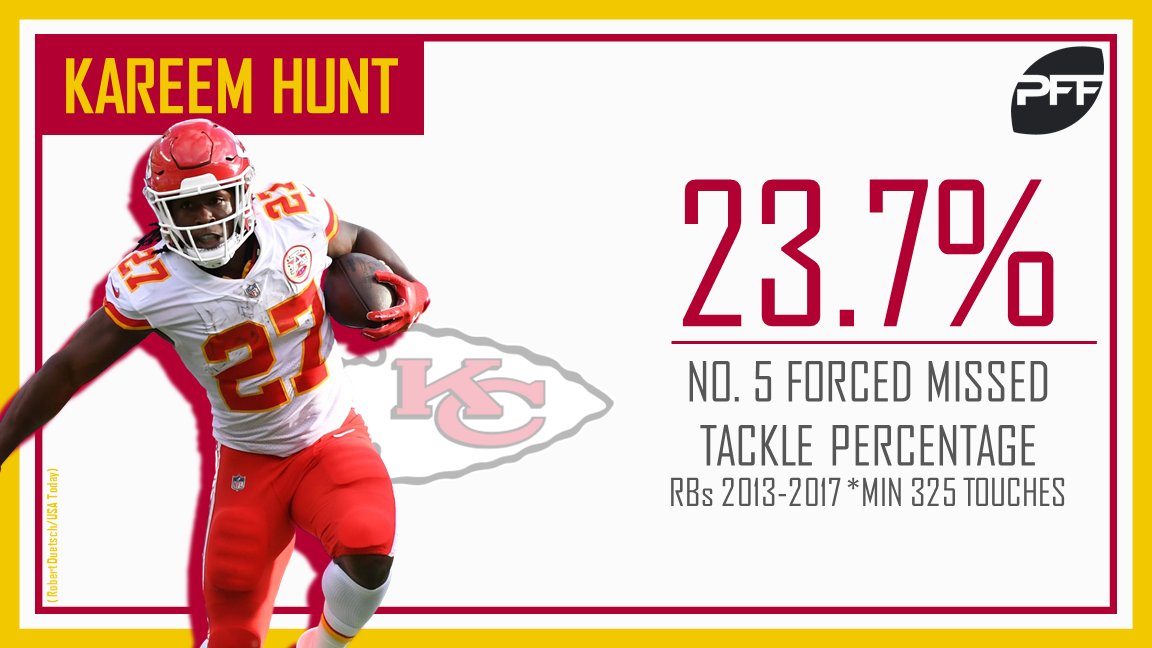 Once Spencer Ware suffered a knee injury in the preseason, the door opened for Hunt to be the lead back in the Chiefs’ backfield. He went on to win the NFL rushing title with 1,327 yards and finished third in total yards from scrimmage.

Only four running backs over the past five seasons have forced missed tackles at a higher rate than Hunt did as a rookie. He also caught 53 of his 62 targets for 455 yards and three touchdowns.

It remains to be seen how Ware will be worked back in to the backfield mix, but Hunt offers top-five potential in any format in 2018 drafts.

Despite seeing limited action the first month of the season, Kamara got a big boost in touches once the Saints traded Adrian Peterson in October.

He went on to set new highs for yards per carry, yards after contact, elusive rating, yards per route run, receiving yards, missed tackles forced as a receiver, and receiving grade recorded by a rookie in the PFF era.

Some regression should be expected, but his future remains bright. Sean Payton knew what he saw when he traded up to grab him and the back is the perfect fit for his system. Kamara’s a great RB1 grab in the middle of the first round.

Even with defenses stacking the box against him, Fournette was able to deliver RB1 fantasy production as a rookie. The Jaguars fed him early and often as he averaged 23.4 touches per contest.

Jacksonville focused on the run, leading the league with 141.1 yards per game as the team made Fournette focal point of the offense. He scored or rushed for 100 yards in 10 of his 13 games.

Durability is a concern, especially when you consider his large workload. Fournette was plagued by ankle and knee issues at LSU and missed three contests in 2017. Still, his talent coupled with his opportunities makes for an extremely high ceiling. 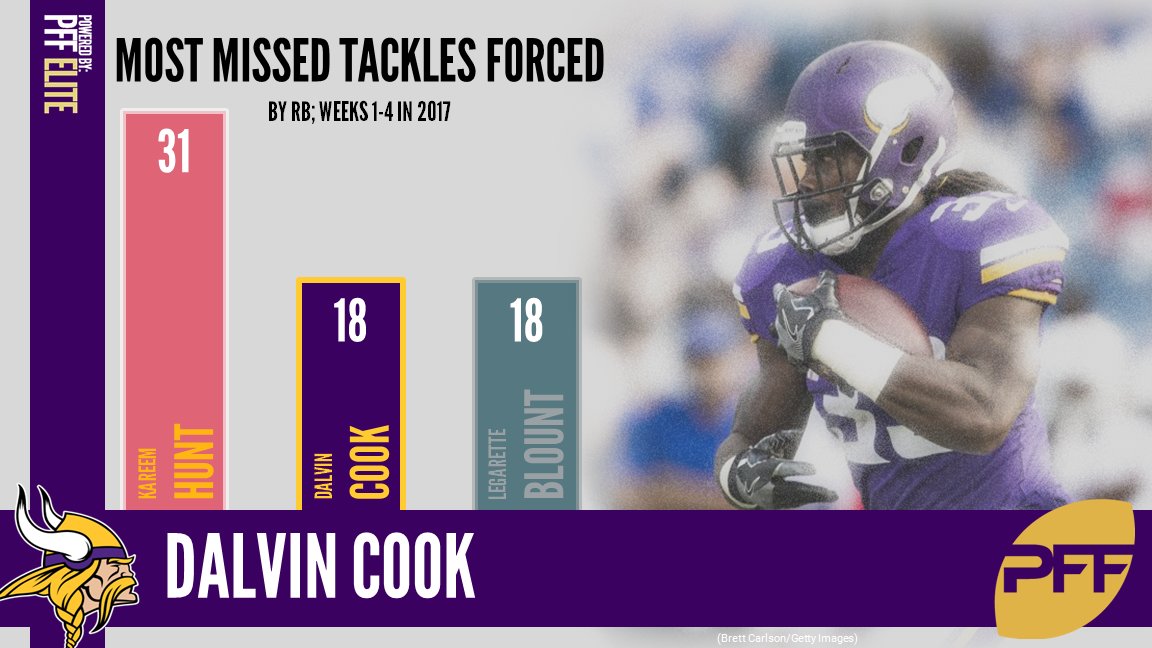 Given the production we saw from Latavius Murray and Jerick McKinnon in his absence, there’s little doubt Cook would’ve made a huge splash had he not gotten hurt. He’s on track to be 100 percent for Week 1.

Murray will return to his backup role and McKinnon left via free agency, leaving Cook in line for a large workload. He’s a safe bet to be a top 10 running back.

McCaffrey struggled to move the ball as a rusher, managing just 3.7 yards per carry. He failed to rush for 70 yards in a single game and only had three contests where he ran the ball more than 10 times.

He delivered nice numbers as a receiver though. McCaffrey led all running backs in targets (106) and was third in receptions (80).

The Panthers parted ways with Jonathan Stewart, but will likely add a complementary back to the mix. McCaffrey will push to be a RB1 in PPR formats and remain a starting option across the board.

Playing behind one of the league’s worst offensive lines, Mixon was mostly disappointing during his debut season. Early on the Bengals opted to start Jeremy Hill and that only slowed the youngster’s development.

Once he finally got his chance, he was limited down the stretch by an ankle injury and a concussion. Only two running backs with 170 or more rushing attempts had a worse yards-per-carry average than Mixon’s 3.5 last season.

The Bengals appear to be poised to make Mixon their bell-cow running back in 2018 and that should lead to him being a nice value pick based off of his current 3.07 ADP.

Injuries led to Williams being the lead back over the final eight games and he averaged 93.3 yards per contest over that span. During Weeks 12-14 he tallied 376 total yards and scored five times.

With Aaron Jones and Ty Montgomery still in the mix it remains to be seen how the workload will be spread out when all running backs are healthy. For now, Williams appears to be the best bet to be the early-down back in the Packers’ high-powered offense.

There were 24 running backs selected ahead of Carson in last year’s draft, but after turning heads in training camp he quickly emerged out Seattle’s crowded backfield.

He rushed for 208 yards on 49 carries and caught seven balls for 59 yards and a TD before breaking his leg in Week 4. Carson sits atop of the Seahawks’ depth chart for now and if he stays there he’ll be a name to watch.

After being slowly worked into the mix for the Texans, Foreman had a breakout performance in Week 11, compiling 80 yards and two scores on 13 touches before suffering a season-ending Achilles’ injury.

Houston clearly is not sold on Lamar Miller, and if Foreman can get healthy in time for training camp he could work his way into a bigger role for 2018. He makes for an intriguing bench stash.

Cohen got off to a great start with three of his best four games coming in the first three weeks of the season. However, playing in a Bears’ offense that lacked many weapons his production quickly dried up.

He finished with the ninth-best PFF receiving grade by a running back and should benefit from the arrival of Matt Nagy as the head coach along with some of the newly added weapons Chicago signed in free agency. He makes for a nice PPR flex option.

Which of these second-year RB's do you think will have a better PPR fantasy season in 2018?

After being a non-factor during the first three weeks of the season, Jones was forced into action due to injuries and responded in a big way. Only five running backs scored more fantasy points than Jones did from Weeks 4 to 7 before he suffered an injury of his own.

The talent and the upside are there, but the backfield is crowded. Add in the fact he’s facing a potential suspension for marijuana possession and his 2018 outlook remains cloudy.

Mack was a plus contributor as both a rusher and a receiver as rookie, finishing with 583 total yards and four scores on 114 touches.

The Colts have moved on from Frank Gore and will likely address the position in the draft. Mack doesn’t have the build to be a workhorse running back but is in line for 8-12 touches per game and should be on your fantasy radar.

It was a mixed bag of results for Perine during his rookie campaign. He was buried on the depth chart before injuries opened the door for him. He had a pair of good games in Weeks 11-12 before fading down the stretch.

He only scored once all season and averaged just 3.4 yards per carry. The Redskins are expected to add depth at the position in this year’s draft and that won’t bode well for Perine’s value.

Gallman averaged 4.3 yards on his 111 rushing attempts and offered surprising production as a receiver in 2017 as he had 34 receptions and finished with double digit PPR points in five of his 13 games, including in all three games during Weeks 14-16.

The Giants have yet to re-sign Orleans Darkwa or Shane Vereen, but they did add Jonathan Stewart in free agency. Gallman figures to remain in the mix enough to warrant some consideration.