When it comes to fantasy football, volume has always been king. We want the players who generate the most targets and touches — opportunities lead to fantasy points. But not all opportunities are created equal.

Last summer, I wrote about money opportunities — the most high-value touches and targets players can receive, including end-zone targets, deep targets (20 yards or more), air yards, carries inside the 10-yard line and carries inside the 5-yard line.

It's time to take a look across the NFL landscape to determine which teams have the most high-end vacated targets and touches after NFL free agency. We can use this information to identify teams that offer newly acquired free agents and incoming rookies with a bounty of high-value opportunities in 2021.

We can also use it to see which incumbent players will benefit the most from a teammate’s departure in the offense.

The Detroit Lions have the most vacated end-zone targets in the league, and the New Orleans Saints have the highest percent of vacated end-zone targets. Both of these teams have massive holes to fill after the departures of Jared Cook, Emmanuel Sanders, Josh Hill, Austin Carr, Tommylee Lewis, Marvin Jones Jr., Kenny Golladay, Danny Amendola, Mohamed Sanu and Jesse James.

We often project ancillary receivers like Breshad Perriman or Tre’Quan Smith to take on some of these abandoned targets, but it's more likely that the alpha receiver in the room commands the lion’s share.

In the case of the lowly Lions, I fully expect tight end T.J. Hockenson to reap the benefits of all the end-zone targets up for grabs. He finished second on the team last season with 10 end-zone targets. At just 24 years old entering his third season, Hockenson could become a legitimate and reliable fantasy tight end.

I also anticipate that the Lions will draft a rookie WR who will also garner some of the team’s end-zone targets, so don’t go hog-wild drafting Perriman late in best ball drafts quite yet. 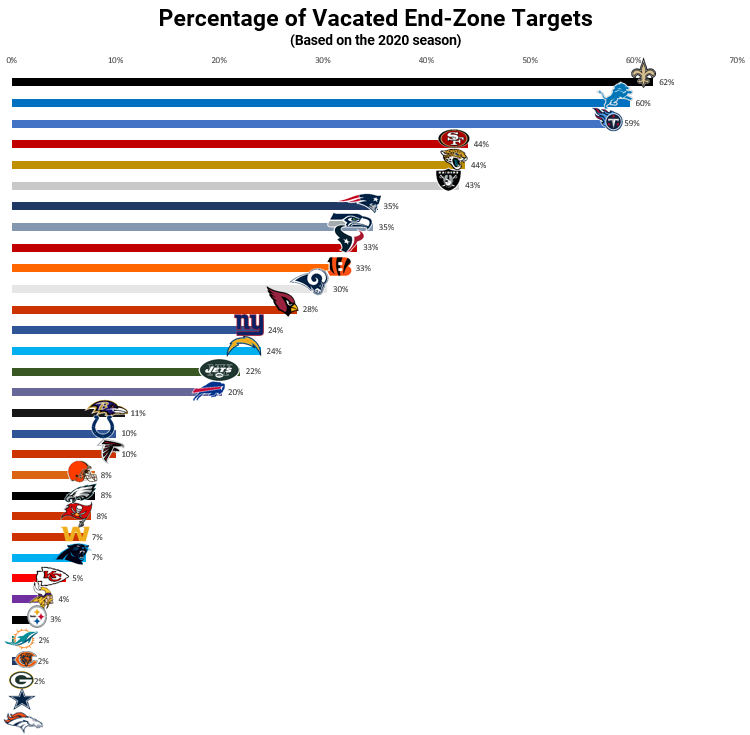