The easiest and hardest fantasy schedules from the 2019 season

Instead of attempting to make fantasy predictions based on the projected strength of a player’s schedule, I’d rather see how strength of schedule actually impacted a player’s numbers in the previous season. This can help us answer the following questions: Which players were exceedingly lucky or unlucky? How much better or worse did a player perform after adjusting for this variable beyond their control? And, most importantly, because year over year correlations are so low, which players might be ideal regression candidates (positive or negative) heading into the 2020 season?

In order to answer these questions, we first had to measure strength of schedule. This is typically done by calculating a defense’s fantasy-point-per-game average and then looking at the average for all players over a full season. To control for opposing offense, you can then measure fantasy points per game over an opponent’s average.

For instance, last season, opposing quarterbacks averaged +7.3 fantasy points per game over their season-long average when facing Miami, which ranked worst in the league. On the opposite end of the spectrum, quarterbacks fell short of their season-long average by -7.0 points when facing New England, which ranked best in the league. Calculating these numbers for all teams and then applying the full-season average for all players quantifies in real terms which players had the easiest and most difficult schedules for fantasy.

For instance, Baker Mayfield had the toughest schedule among all fantasy quarterbacks, with an average of -1.25. This means that if he had a perfectly average strength of schedule, we should have expected him to score an additional +1.25 fantasy points per game — or  the difference between him finishing 25th in fantasy points per game (15.6) and 17th (16.9). For other positions, it gets a little trickier on the player level — unlike quarterbacks, the other positions rarely capture 100% of their team’s fantasy points at their position — but the rank order is still accurate.

Hardest strength of schedule in 2019 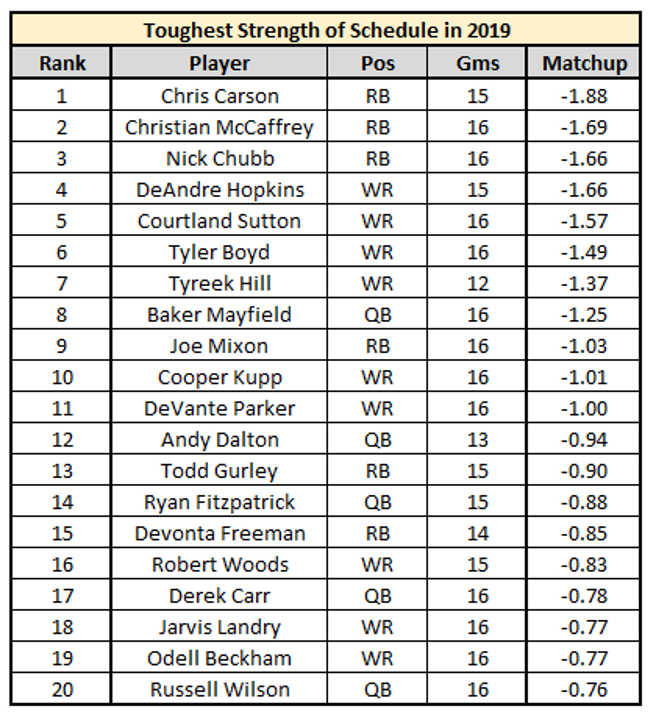 In 2019, McCaffrey scored 471.2 fantasy points, or, the second-most by any player at any position in any season in NFL history. As monumental as that feat is, it becomes all the more impressive when factoring the league’s second-most difficult schedule at any position. He got the short end of the stick, playing for Carolina (the league’s softest fantasy defense against running backs) in the NFC South, twice facing the league’s toughest (Tampa Bay), fourth-toughest (New Orleans), and seventh-toughest (Atlanta) defenses against opposing running backs.

Not only was Sutton hamstrung by poor quarterback play, but he was faced with a brutal strength of schedule, twice playing against the Chiefs and the Chargers in the AFC West. Facing the Chargers means drawing shadow coverage from Casey Hayward — our No. 1 cornerback over the past three seasons. The Chiefs don’t shadow, but they did rank best in fantasy points allowed to opposing outside wide receivers (where Sutton runs 82% of his routes). Despite this, Sutton finished as our No. 10-graded wide receiver, while also ranking 12th in yards per route (2.08) and second in yardage market share (36%). He feels highest on everyone’s list of breakout candidates heading into 2020. Because quarterbacks typically capture all their team’s fantasy points, we can feel comfortable adding back Mayfield’s matchup rating into his fantasy-point-per-game average. This will give us a player’s schedule-adjusted fantasy points per game. In Mayfield’s case, doing so bumps him from 25th at the position (15.6) to 17th (16.9). Playing against the Steelers and Ravens twice each per year won’t be doing him any favors, but this does make his underwhelming 2019 season look a little less lousy.

Bonus stat: Russell Wilson’s schedule only ranked fifth-toughest among quarterbacks (-0.76), but that’s still enough to bump him up from seventh in fantasy points per game (20.9) to third in schedule-adjusted average (21.6).

Freeman had the sixth-toughest schedule among running backs. Considering he was also the most matchup-sensitive player in fantasy, that was a problem. In Freeman’s six better-than-neutral (positive) matchups, he averaged 25.3 fantasy points per game. Across his eight worse-than-neutral (negative) matchups, he averaged just 10.0 fantasy points per game (high-end RB4 numbers).

Beckham averaged 12.6 fantasy points per game in 2019. In every other year of his career he averaged at least 18.5. Beckham’s down season could be blamed on poor play-calling from the recently ousted Freddie Kitchens or a core muscle injury suffered in August. One other contributing factor was almost certainly strength of schedule.

Beckham had the eighth-toughest strength of schedule among wide receivers, but, digging deeper, it was probably a good deal tougher than that. By this methodology, Beckham’s strength of schedule was tied with Jarvis Landry, but, remember, Beckham often draws the opposing team’s top cornerback. Beckham led all of 79 receivers in percentage of routes lined up against a top-35-graded cornerback (44%).

Statistically speaking, matchups tend to matter far less for tight ends than for quarterbacks, running backs, and wide receivers. No tight end appeared on the above chart, but Kelce had the toughest schedule at the position (-0.61). He finished the 2019 season barely outscoring George Kittle on a per-game basis for most at the position. However, if schedule-adjusting those numbers, Kelce would extend his lead by 0.80 fantasy points per game.

Easiest strength of schedule in 2019 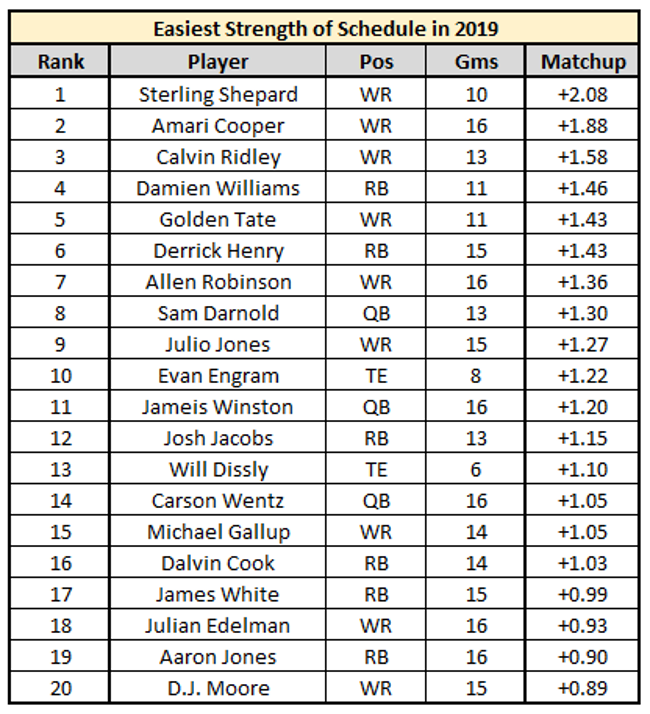 Things get murky when looking at strength of schedule at the wide receiver position. That’s because a defense could look soft against wide receivers on the whole but tough against opposing WR1s (they have an elite shadow cornerback but are weak elsewhere). Or, they could appear neutral overall while ranking tough against outside wide receivers and soft against slot wide receivers. In any case, our data said Shepard had one of the softest schedules in the NFL. However, it had little effect on his per-game numbers – he was actually more productive in “tougher” matchups.

That said, I think there might be something else going on. Shepard rarely left the slot in college, or in any NFL season prior to 2019, but, after Golden Tate’s acquisition and return from suspension, Shepard was kicked outside for the majority of his routes. Across the four games he ran over two-thirds of his routes from the slot, he averaged 16.8 fantasy points per game. Across the five games he ran under a third of his routes from the slot, he averaged just 10.9 fantasy points per game.

Playing in the NFC East – against the teams giving up the fourth- (Giants), fifth- (Eagles), and 12th-most fantasy points per game (Redskins) to opposing wide receivers – Cooper was at a massive advantage for fantasy. For him specifically, this was especially meaningful – he has long been one of the most volatile and matchup-sensitive players in fantasy. Perhaps uncoincidentally, he set a new career-high in fantasy points per game (15.4) in 2019.

Henry had the second-softest schedule at the position, and clearly took advantage of it. In his 11 positive matchups he averaged 23.0 fantasy points per game. Across his other five games, he averaged just 16.0.