Each week in this space, I’ll be highlighting the players I’m building most of my lineups around on that week’s main slate. (Most of these locks are for tournaments, though I’ll do my best to differentiate where needed.) Lock these guys into lineups and go from there. Check out below for Week 6.

This game has a 56-point over/under (easily the highest of the week) and would normally offer us two lock-plays at quarterback. But the ankle injury to Patrick Mahomes makes him too risky for my blood, especially considering he’s $600 more than any other quarterback (and $800 more than Watson). A flyer on Mahomes in a few tournament lineups wouldn’t be out of line by any means, but I’m going to be underweight on him. Meanwhile, Watson is less than a point shy of Russell Wilson for the top-scoring fantasy quarterback so far, has all his top weapons healthy, and should have no choice but to score as often as possible Sunday. 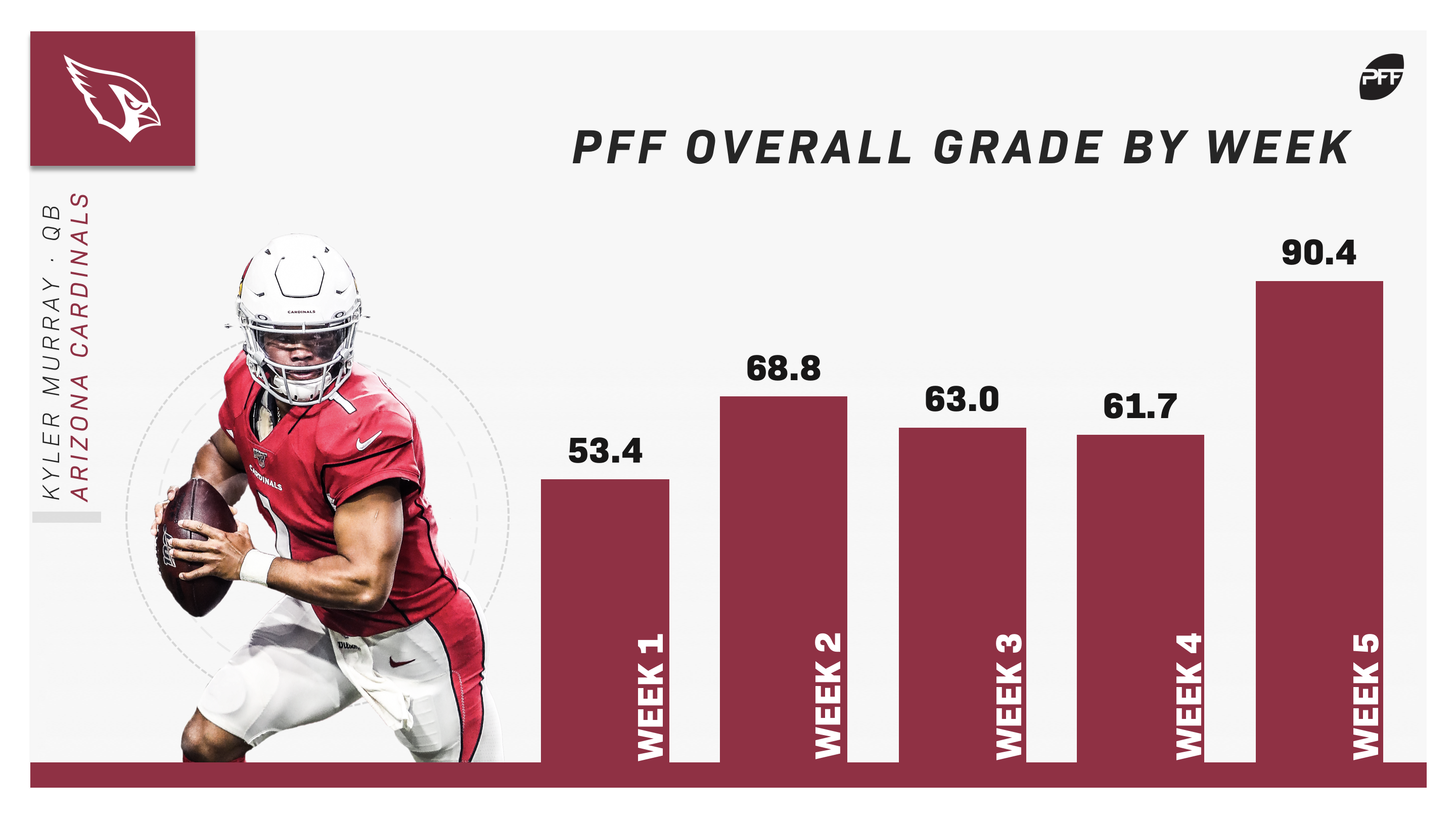 Speaking of high-scoring games, Sunday’s Falcons/Cardinals game features the second-highest over/under of the week at 52 points. Ryan is off to an excellent start from a yards and touchdowns perspective and draws a generous Arizona pass defense, while Murray is coming off easily his best game as a pro (90.4 PFF grade; previous high was 68.8). Expect fireworks in this game, and you’ll want a part.

The three quarterbacks mentioned before Cousins are all in the six highest salaries on this week’s main slate. For those hunting savings, though, Cousins is only 15th in salary. You don’t need the reminder, but the Eagles have an elite fantasy run defense and one of the league’s worst secondaries. Expect Stefon Diggs and/or Adam Thielen to have big games as stack options.

One note before diving in: If David Johnson and/or Todd Gurley are ruled out, their backups — Chase Edmonds and Malcolm Brown, respectively — are absolute locks, but given current ambiguity in those situations, I'm treating them as committee options at best for now.

The Jaguars? PFF’s second-lowest tackling grade, 43.8. Kamara? The most forced missed tackles in the league, 38. That combination? Explosive.

Elliott had a relative disappointment in Week 5, scoring “only” 17.1 PPR points despite what looked like one of the best possible matchups. The reason for that was in part because the Packers jumped out to a big lead so early that the Cowboys couldn’t lean on their running back like we all expected. “Opponent jumps out to a big early lead” doesn’t seem to be a huge concern against the 0-4 Jets.

Derrick Henry, Le’Veon Bell, and Matt Breida have all had huge games against the Browns (plus Tevin Coleman joined Breida with big numbers for good measure). The Ravens combined for 173 yards on them. They have the league’s second-lowest PFF run-defense grade at 51.8. Carson is coming off his biggest snap load (62) and highest carry total (27) of the season, with little reason to expect that to slide.

Peterson is just about a lock-button play in cash games at only $4,500 (on DK) at the easiest-run-defense Dolphins under a new head coach who has expressed a desire to go run-heavy, especially with Washington a favorite for what is probably the only time all year. In tournaments, he’s obviously riskier, with minimal passing-game involvement and without a huge offense around him. There’s nothing wrong with Peterson as a savings option in tournaments, but this is more of a cash play.

As mentioned above, this game could offer huge offense, and it’s one you’ll likely want to utilize big stacks. Watson, Hopkins, Will Fuller, and/or Chiefs Travis Kelce and Tyreek Hill (if he returns) are all firmly in play, as are the cheaper pass-catching options on both rosters and even the running backs if you’re feeling contrarian. But Hopkins, who is only $7,400 in DraftKings (as low as we’ll ever see him), could finally get going this week — you’d have to think Watson wants to get his start back on the board.

Fitzgerald has 180 yards on deep (20-plus yards downfield) targets so far this year. We’re only through five weeks, but it’s already his highest full-season total since 2011. His usage has changed with Kliff Kingsbury and Kyler Murray. The Falcons have been the most burnable team on downfield targets this year, allowing 11 touchdowns on balls targeted at least 10 yards downfield, three more than any other team. 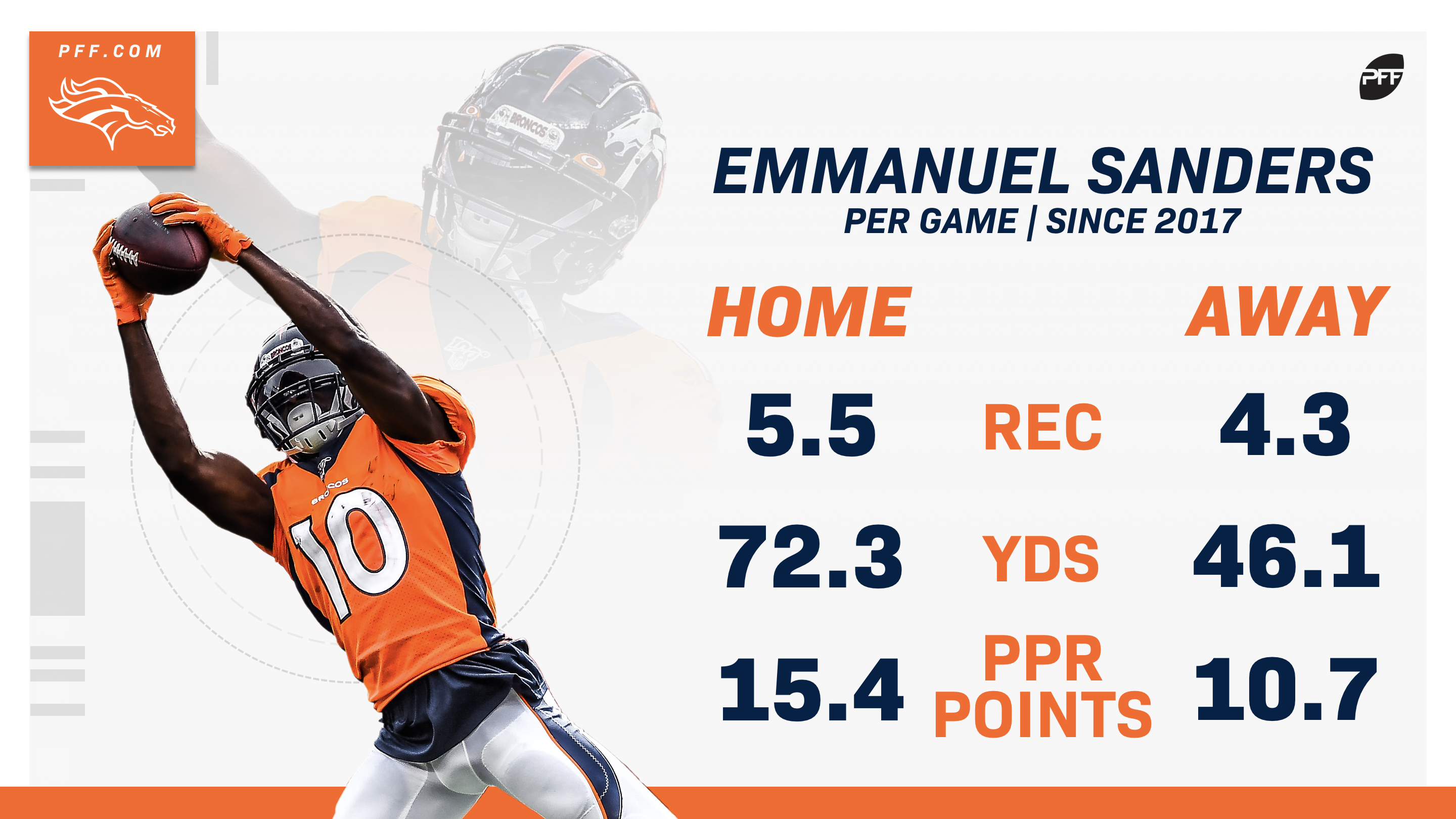 Sanders has averaged 23.6 PPR points per game at home this year with a 90.0 PFF grade. He’s averaged 8.2 on the road with a 65.1 grade. One possibility: That’s noise. Another: Sanders, who leads the Broncos in slot targets (14) and receptions (11) despite running fewer than half as many slot routes as DaeSean Hamilton (50 to 114), is more susceptible to difficulty on pre-snap adjustments on the road when dealing with stadium noise. Hypothesis? Absolutely. But those splits have been notable for three years now, and they’ve only grown. With Sanders at home this week, it’s intriguing enough to me that I’m going to utilize him.

Even with a quiet game from Tyler Eifert in Week 5, the Cardinals are still obliterating the field in points per game allowed to tight ends. And you could easily argue Hooper is the best one they’ve played so far.

Since Nick Vannett’s departure, Dissly is third in the league in tight end snaps played, and he faces a Cleveland defense that has allowed 20-plus points to opposing tight ends three times in five games.

Once you get past the expensive tight ends, it’s tough to find much to like at the position. Swaim, though, is $2,900 on DraftKings. Swaim and James O’Shaughnessy would be a top-10 TE so far this year if they were one guy, and now that O’Shaughnessy is on IR with a torn ACL, they kind of are one guy. Josh Oliver’s eventual debut will influence Swaim’s potential, but the fact that the team just signed Ben Koyack (he of 24 career receptions since entering the league five years ago) says that might not happen yet.