Each week in this space, using the information and data available to PFF subscribers, I’ll highlight the players in that week’s main slate that I think should be crossed off for that week, or at least used very sparingly. These are the Week 5 fades. 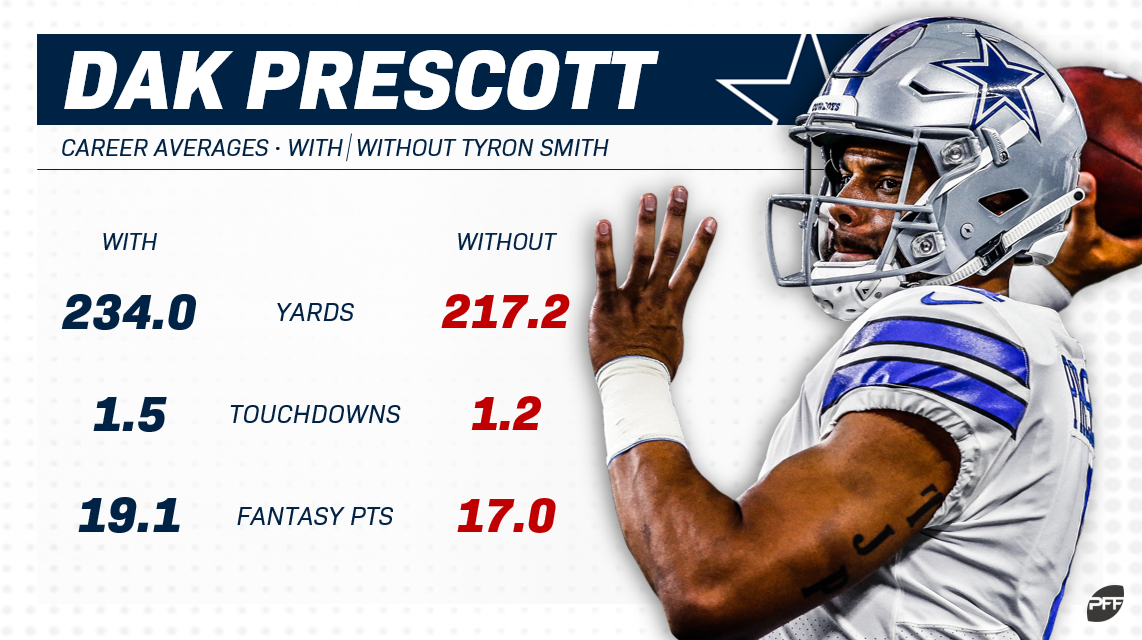 The Cowboys are likely to be without Tyron Smith Sunday. He’s missed three games in each of Prescott’s three seasons. In games without Smith, Prescott has averaged 17.0 fantasy points, compared to 19.1 in all other games. That’s not a dramatic difference, but it is worth noting. Add in a good Green Bay pass defense that will funnel the Dallas offense to Ezekiel Elliott and the run, and notably Jaire Alexander particularly locking down Amari Cooper, and this is not a good Prescott week.

Once you get past Prescott, there aren’t many glaring avoids among quarterbacks on this week’s slate — you could make a decent argument for most of the big names. But if you’re looking to save, there are some avoids. This game has the lowest over/under of the week at a measly 38.5 points. Assuming Matt Barkley is the quarterback for the Bills, it could lead to decent field position for Mariota and the Titans offense, but it also should make for an extremely Derrick Henry-heavy gamescript, with the Titans not needing to pass as often.

Minshew’s been a perfectly competent quarterback so far, surprising everyone. He’s not much of a rusher, though — he has exactly 1 rushing yard on a designed run so far (though he did have a 56-yard game in Week 2) — and had 135 rushing yards in his final season at Washington State. The Panthers have allowed the seventh-fewest fantasy points per game to opposing quarterbacks so far, but the fifth-most per game on the ground. In other words, the Panthers shut down the passing game; only the Bills and Patriots have allowed fewer passing points per game, and those teams have both faced immeasurably easier schedules.

Since Drew Brees’ injury, the Saints offensive attack has boiled down to basically just Kamara and Michael Thomas. Sunday, that should boil even further, as Thomas has one of the best possible matchups against the Buccaneers’ woeful slot defense, while Kamara draws a run defense that has allowed the fewest rushing yards per game in the league despite facing San Francisco, Carolina, the Giants, and the Rams through four weeks. Kamara will get some passing action, to be sure, but the problems he’ll face on the ground make him a dicey play at his DFS salary.

An expensive running back facing the Eagles is a dicey enough proposition given the success that team has had shutting down opposing running games. Bell was going to be a scary play even with Sam Darnold back and at full strength. The fact that he’ll have Luke Falk as his quarterback again just cements that there is no way you should consider Bell.

The matchup against the Broncos is a good one, as Denver has allowed the fifth-most PPR points to opposing running backs so far. But Gordon returns to action and is immediately top-seven in DraftKings salary (he’s 12th on FanDuel, making him slightly more palatable). And as we saw from Ezekiel Elliott in Week 1 and Le’Veon Bell in Week 1 of 2017, running backs in their first game back after holdouts that cost them training time (a) get eased in, and (b) aren’t terribly efficient. Gordon’s season-long outlook is fine, but in Week 5 I’m fading him completely.

If Week 4 is any indication, Jones has supplanted Peyton Barber as the No. 1 in the Tampa Bay backfield, and he’s looked good, ranking as PFF’s top-graded running back so far this year. Long term, we have to really change how we look at Jones. In Week 5? He’s facing a New Orleans defense that has allowed the fourth-fewest PPR points to opposing running backs while being very vulnerable through the air. He’s off the board.

As our Scott Barrett wrote a few weeks ago, Cooper has been perhaps the wide receiver most vulnerable to shadow coverage over the last two seasons. Per our WR/CB matchup chart, Cooper’s likely to see a shadow from Jaire Alexander this week, which shapes up as the second-worst coverage situation in the league, with Alexander’s 88.3 PFF coverage grade ranking No. 2 overall. 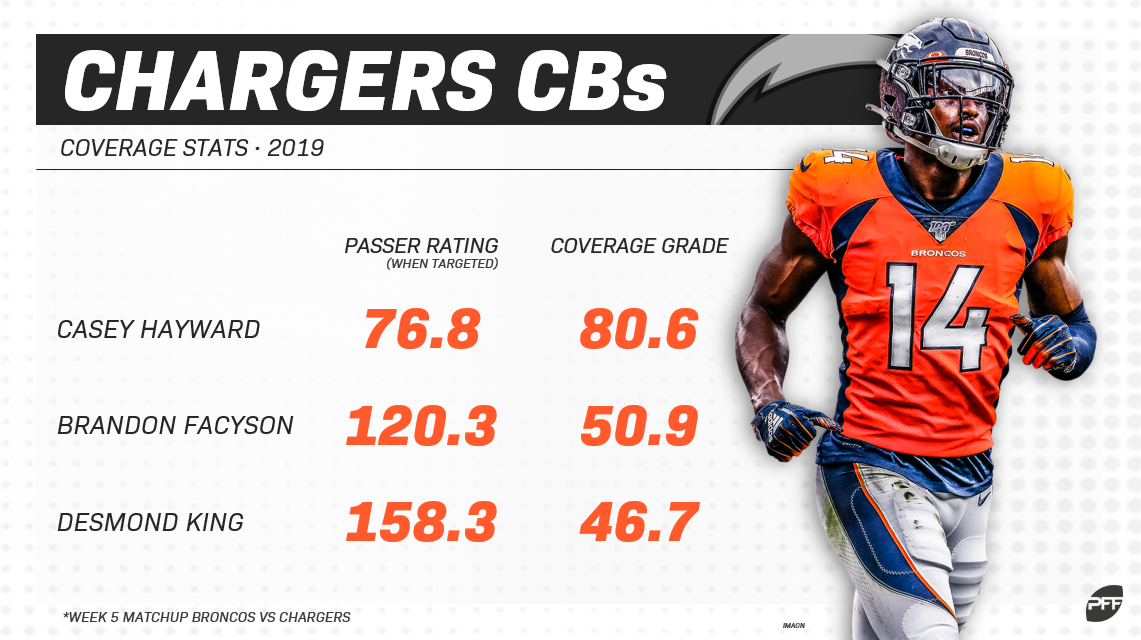 On the whole, the Chargers aren’t a terrifying defense for wide receivers — they’re almost exactly middle of the pack in PPR points per game allowed to the position. But the beauty of the WR/CB matchup chart is that we can dive deeper on the matchups. Sutton is almost certain to be shadowed by Casey Hayward in this game, which is one of the worst possible matchups. The Chargers’ other two primary cornerbacks — Desmond King and Brandon Facyson — have allowed a combined 150.0 passer rating into their coverage this year. Hayward? A measly 76.8. Sutton’s been very productive so far, but not this week.

The aforementioned league-low 38.5-point over/under and likely run-heavy approach in this game should keep you off of Davis to begin with. Add in coverage from the combination of Tre’Davious White and Levi Wallace and Davis’ traditional struggles against elite corners, and he’s a do-not-touch.

You want to use receivers against Eagles. It’s such an appealing matchup. No team has allowed more points to the position than the 47.8 per game the Eagles have. But with Sam Darnold out again this week and Luke Falk at quarterback, it just shuts the door on this offense completely. It’s depressing, because you want to exploit the matchups, but you just can’t this week.

Waller is one of the top DFS cash plays every week, with one of the league’s highest floors, given his target load and lack of many other options with the Raiders. But in tournaments, I’m off Waller until we see the team use him near the end zone. He has zero end-zone targets this year out of 37 total targets, easily the most targets among tight ends without getting those valuable opportunities. Given his usage everywhere else, Waller has the worst scoring upside among all the league’s upper-level tight ends.

I said to avoid Marcus Mariota. I said to avoid Corey Davis. Also, avoid Walker, for both the aforementioned run-heavy reasons and because the Bills have a strong tight end defense, given that the team has allowed 10 receptions and 76 total yards to the position through four weeks.