Who are the best fantasy football plays for building an optimal DFS lineup in Week 16 of the 2018 NFL season? As we do every Saturday, this piece brings you the DFS locks of the week.

The Steelers have an implied team total of nearly 24 as six-point road ‘dogs in New Orleans, which means this team could be passing all game long. That’s good news against New Orleans’ secondary, which has allowed the fifth-most fantasy points to quarterbacks this year. Big Ben gives you the ideal floor/ceiling combo you want in DFS.

Brees has been a letdown in recent weeks, but this is a get-right spot at home against the Steelers in a game with the highest over/under on the slate (53). Brees is averaging 28.7 DraftKings PPG at home vs. 17.1 on the road.

Prescott remains cheap in DFS — he’s the No. 14-priced quarterback on both FanDuel and DraftKings — and he has a plus draw against the Buccaneers, a bottom-five team against fantasy quarterbacks this year. It’s also a home game for Prescott and the Cowboys, and Prescott’s home/road splits have been stark this season. He has a 13-3 TD/INT ratio at home vs. 4/5 on the road. He has 21.8 DraftKings PPG at home vs. 14.3 on the road.

Elliott has a prime matchup against the Buccaneers, who have allowed the third-most fantasy points per touch to opposing running backs. For his part, Elliott has 25 or more touches in six straight games (!). As a seven-point home favorite in a game with a relatively high over/under (48), this is a smash spot for Elliott.

The Panthers could lean on McCaffrey even more than usual with Cam Newton sidelined. The Falcons rank dead last against running backs in receptions allowed for the 107th straight season (give or take a few). McCaffrey has at least five receptions in seven straight games with double-digit receptions easily in his range this week; he caught 14 balls against these same Falcons in Week 2.

Barkley saw a huge price drop ($1,500 on DraftKings) after disappointing last week, but it feels overdone. He is one of the best receiving backs in the NFL, and the Colts have allowed the second-most receptions to opposing running backs this year. The misprice might make Barkley super chalky, but his role at that price point is hard to pass up. 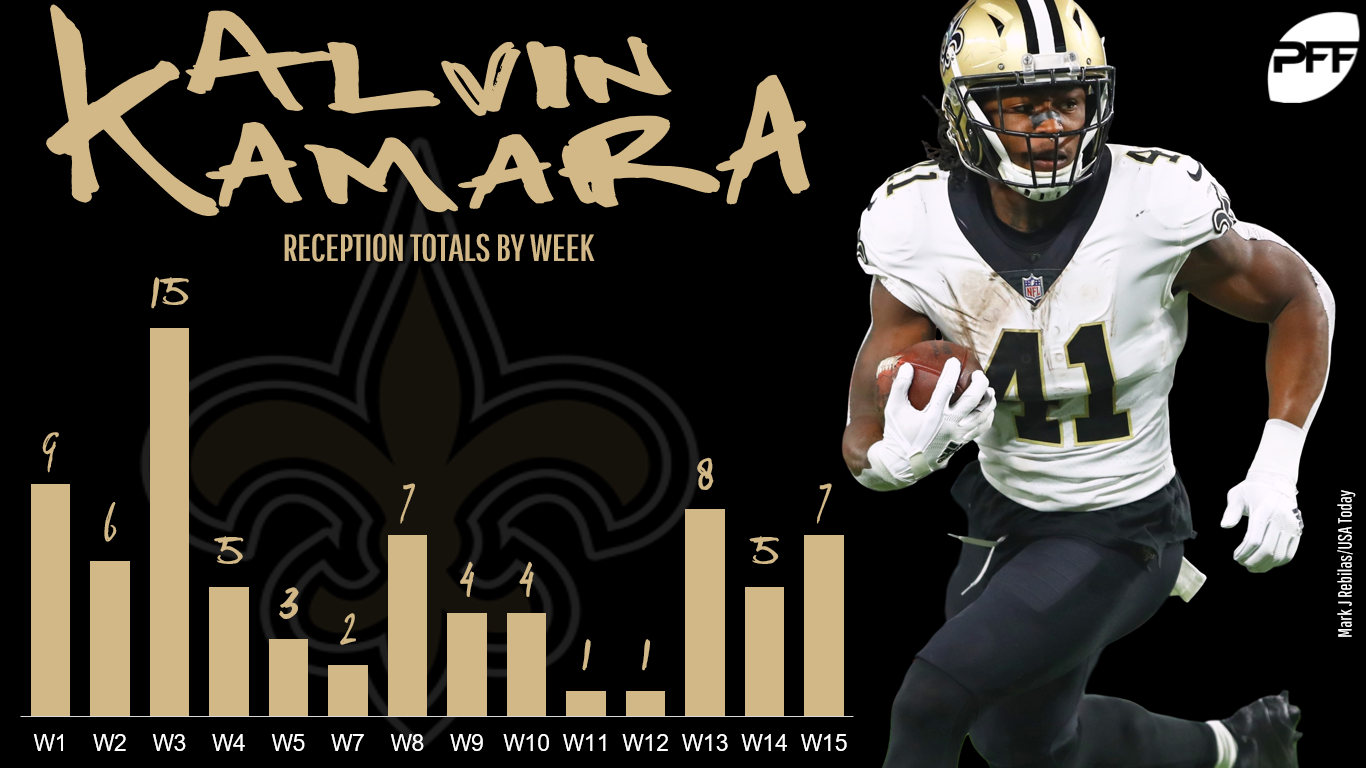 Kamara is underpriced across the industry despite the favorable game environment (a projected high-scoring affair in the Superdome). Kamara’s receiving floor is also back, as he has at least five receptions in three straight.

James Conner has been ruled out again, and even though Samuels’ price has increased to the point where you at least have to think about him now, he’s still worth it. While filling in for Conner over the last two weeks, Samuels has averaged 19.5 touches and 132 yards per game.

The lockiest of all locks in Week 16, Hopkins gets the lifeless Eagles secondary, which has allowed the second-most fantasy points to receivers this season. Hopkins’ slate-breaking upside was on display last week with a 10-170-2 line. That kind of ceiling is achievable again.

Edelman was already popping as a value — especially on full-point PPR site DraftKings — and he’s now a must-play with Josh Gordon no longer playing for the Patriots. Double-digit targets are a virtual guarantee this week, and Edelman got the best of this Bills secondary in October with a 9-104 line.

The cornerback-immune Adams has the fifth-best individual WR/CB matchup of the week against New York’s Morris Claiborne. As our own Jeff Ratcliffe noted in his Week 16 fantasy focus: Claiborne is allowing a massive 15 yards per reception this season.

Even though his price has seen a needed bump in recent weeks, Anderson is still far too cheap across the DFS industry. Anderson has seen healthy volume for nearly two months now, with at least seven targets in five of his last six games — including double-digit targets in two of those games. His Week 16 shadow coverage man, Jaire Alexander, has allowed 2.05 yards per route covered, sixth-most among this week’s starting corners.

Don’t fret about last week’s bad performance. Ertz is a prime bounceback candidate against the Texans, who have allowed the 11th-most fantasy points per target to tight ends and the eighth-most points to the position overall. Ertz did still see seven targets last week. He’ll be fine.

Another bounceback candidate, Hooper has a great matchup against a Panthers team he dropped 5-59-1 on earlier in the year. The Panthers have struggled against the position all season, giving up the third-most fantasy points to tight ends in 2018. 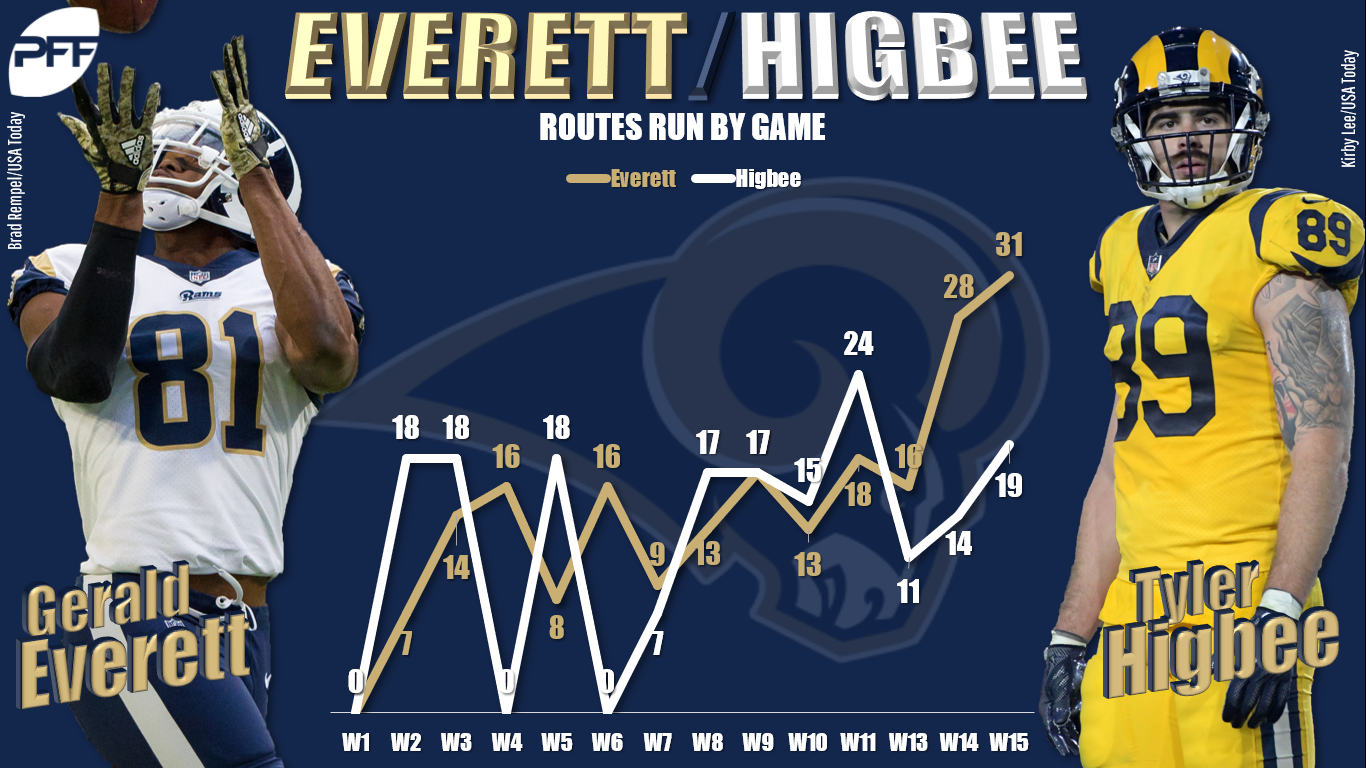 As noted in my Week 16 DraftKings cash guide, Everett has become the primary tight end in Los Angeles — but his DFS price doesn’t yet reflect this fact. He’s trouncing fellow tight end Tyler Higbee in routes run over the last three weeks (at least 50% more in Everett’s favor each game), and he has seven targets in two straight. He’s also often used in high-value, as Everett has four end-zone targets and 12 red-zone targets this season.