Who are the best fantasy football plays for building an optimal DFS lineup during the 2018 Divisional Round? As we do every week, this piece brings you the DFS locks for the main slate.

Mahomes is the most expensive DFS quarterback this weekend, but we still expect him to return the most per-dollar value. The presumptive MVP has simply been unstoppable this season, and there’s no sense in going away from him in the playoffs as a 5.5-point home favorite in a game with the highest over/under (57) on the slate.

As noted in the fantasy facts to know for the Divisional Round article, Brees’ home/road splits have been drastic this season. He’s averaged over 320 yards and three touchdowns per game at home and this week draws an Eagles unit that has allowed the 10th-most fantasy points to opposing quarterbacks, including a 373-4 line to Brees in the Superdome in Week 11.

Ezekiel Elliott's usage over the second half of the season put him on pace for the second-most touches by any player in a season .. ever. https://t.co/eiBLwiRNTS pic.twitter.com/tXaOogBf5A

Elliott has averaged nearly 30 touches per game since Week 9, and that’s not the type of volume you can leave on the table on a short slate. The Saints were actually one of the better teams in the NFL at slowing running backs this year, but Elliott is matchup-proof and his high usage in the passing game makes him game script-proof, too. The Rams allowed running backs to average 4.87 YPC against this season, fourth-most in the NFL.

The Eagles were slightly below average at slowing running backs on the ground (4.57 YPC allowed, 13th-most) and they were shredded by running backs through the air, where Kamara excels. Running backs caught 110 passes against Philadelphia this year, tied for second-most in the NFL. Kamara only had one catch against the Eagles in their Week 11 meeting — something box-score hunters might see and shy away from — but that was a 48-7 blowout and this weekend’s game should be more competitive. 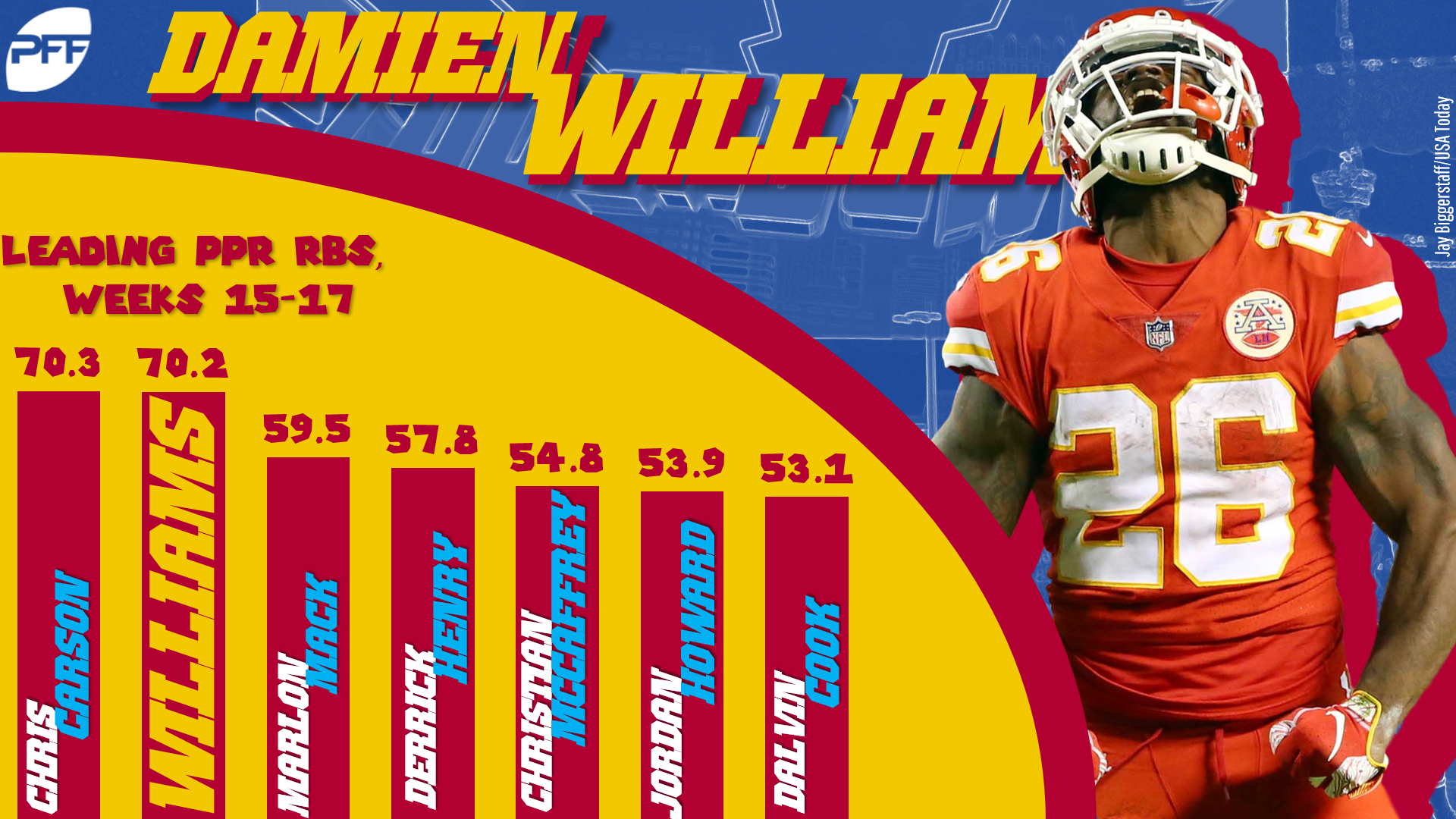 Williams has been a top-three fantasy running back since taking over as the lead option, and even with Spencer Ware trending in the right direction, Williams appears to have secured his role atop the depth chart. He’s super cheap (just $5,100 on DraftKings and $6,100 on FanDuel), which will make him chalky, but it’s good chalk given his role, the team setting (home favorites in a game with serious shootout potential), and the price.

Like Brees, Thomas has had big home/road splits, as he averaged 8.5 receptions and over 100 yards per game at home. He could easily reach those heights this weekend against the Eagles, who allowed the third-most fantasy points to opposing receivers this season. It’s no surprise that Thomas has the best individual WR/CB matchup of the week. 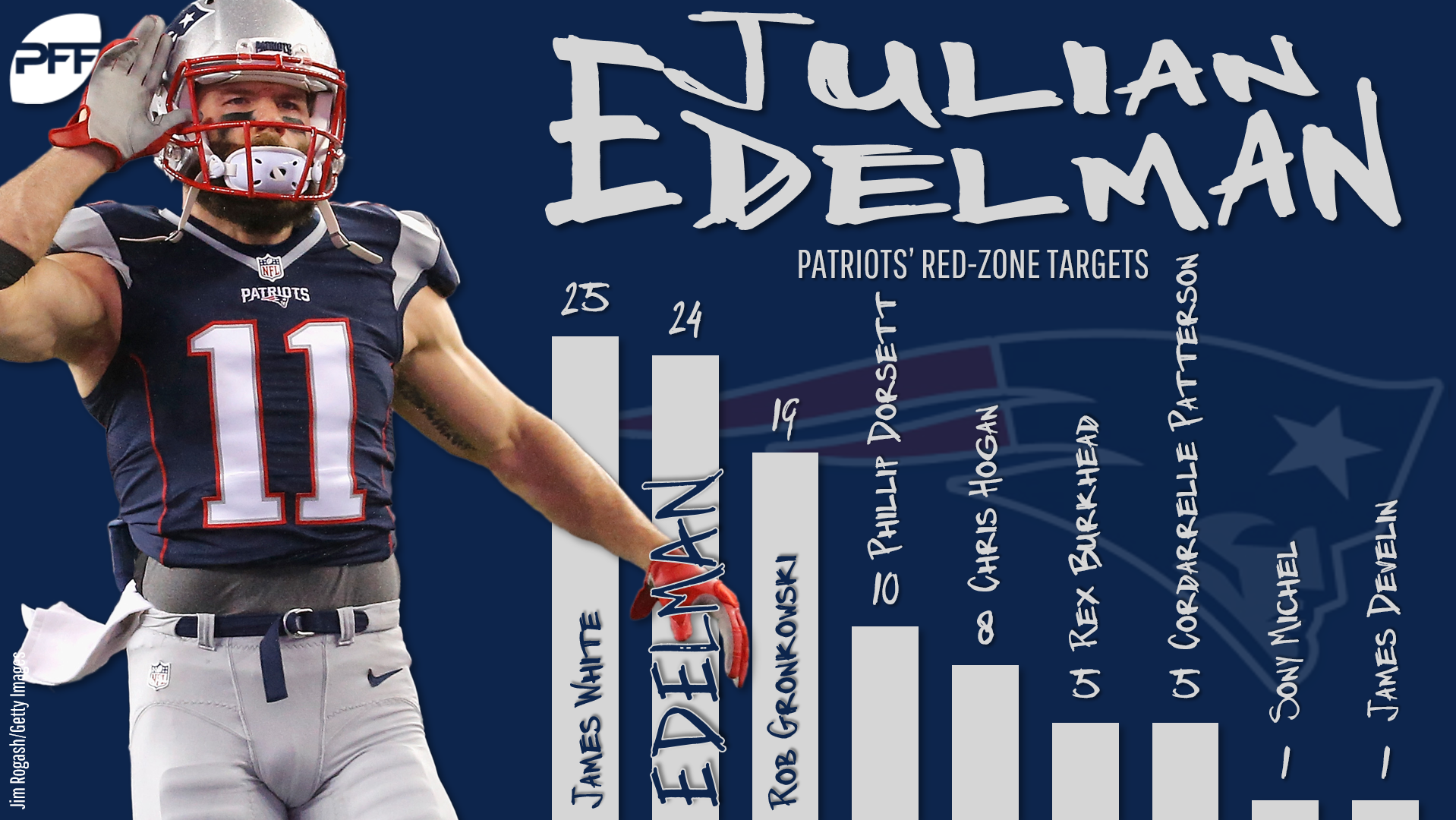 New England’s passing attack flows through Edelman, and he once again ranked in the top-10 in the NFL in targets per game. Unlike previous years, however, Edelman was also heavily utilized in the red zone. His 24 red-zone targets were second in New England (James White had 25), but Edelman also missed four games. Edelman’s six end-zone targets tied Rob Gronkowski for the team lead.

Woods has been arguably the most consistent player at any position all season long. With at least four receptions and 60 receiving yards in every game from Weeks 2-16, Woods provides you with a bankable floor. He also has access to a good ceiling, with at least 19 DraftKings points in five games and over 24 points in three. Dallas’ secondary isn’t a pushover, but Woods does have the best individual WR/CB matchup of the bunch.

Ebron gets the best fantasy matchup for tight ends of the weekend against the Chiefs, who allowed the most points to the position all season (not just of teams playing this weekend, but in the entire NFL). Kansas City allowed a league-high 10 touchdowns to tight ends on the year, while Ebron paced the position with 13 receiving scores. It’s nice when the puzzle pieces fit.