Projecting college wide receivers to the NFL is extremely difficult, and, it seems, especially so over the past few years. Clearly, there are fantasy football implications of the effort.

From 2015 to 2018, 15 wide receivers were selected in the first round and only one so far (Amari Cooper) has ever totaled 1,000 receiving yards in a single season. Over that same stretch, 14 wide receivers were selected in the second round, but three of those players have totaled at least 1,000 receiving yards in a season (Michael Thomas, JuJu Smith-Schuster, and Tyler Boyd). (Obviously, typically, first-round picks should be more productive than their second-round counterparts.)

Basically, that’s a pretty embarrassing hit rate. The best head coach in the history of sport, Bill Belichick, has explains why it’s so difficult to evaluate college wide receivers.

It’s difficult, but many within the fantasy community feel they’ve discovered a metric that predicts future year fantasy success better than anything else after controlling for draft position. This metric — “breakout age” — has been dubbed the holy grail or skeleton key for uncovering the wide receivers most likely poised for a long and successful fantasy career.

Breakout age highlights wide receivers who totaled at least 20% of their team’s receiving yards and touchdowns before a certain age (typically age 20). The larger the market share over 20%, or the younger the breakout age, the more likely a wide receiver is to be a successful player in the NFL and for fantasy football. I was skeptical at first, but after back-testing it, I was blown away — the hit rate on these players is incredibly high.

It makes sense a priori as well. As Adam Harstad explained to me, “Given normal human development, 19-year-old males are at a physical disadvantage compared to 21-year-old males. The ability to dominate despite operating at a handicap is indicative of a surplus of talent. For instance, compiling 1,000 receiving yards in a season where you literally played with one arm tied behind your back would also be a strong indicator of future NFL success.”

Like I said, I came away thoroughly impressed by the stat as a whole and its historical track record at projecting future fantasy stars. However, I also wondered if it couldn’t be improved upon by using a more comprehensive stat. Rather than focusing on yardage and touchdown market share, why not use our receiving grades, which should better represent quality of play rather than raw volume and production? “Breakout grade age,” if you will.

To do this, I built a database looking at all seasons (since 2014) where a wide receiver played on at least 200 snaps on a Power-5 team and had a birthdate easily discoverable (all wide receivers to ever play in the NFL would qualify). Within that database (345 qualifying seasons), here’s our top-20 highest-graded seasons from any wide receiver who was under the age of 21 on Dec. 1 of that year (give or take a handful of days). 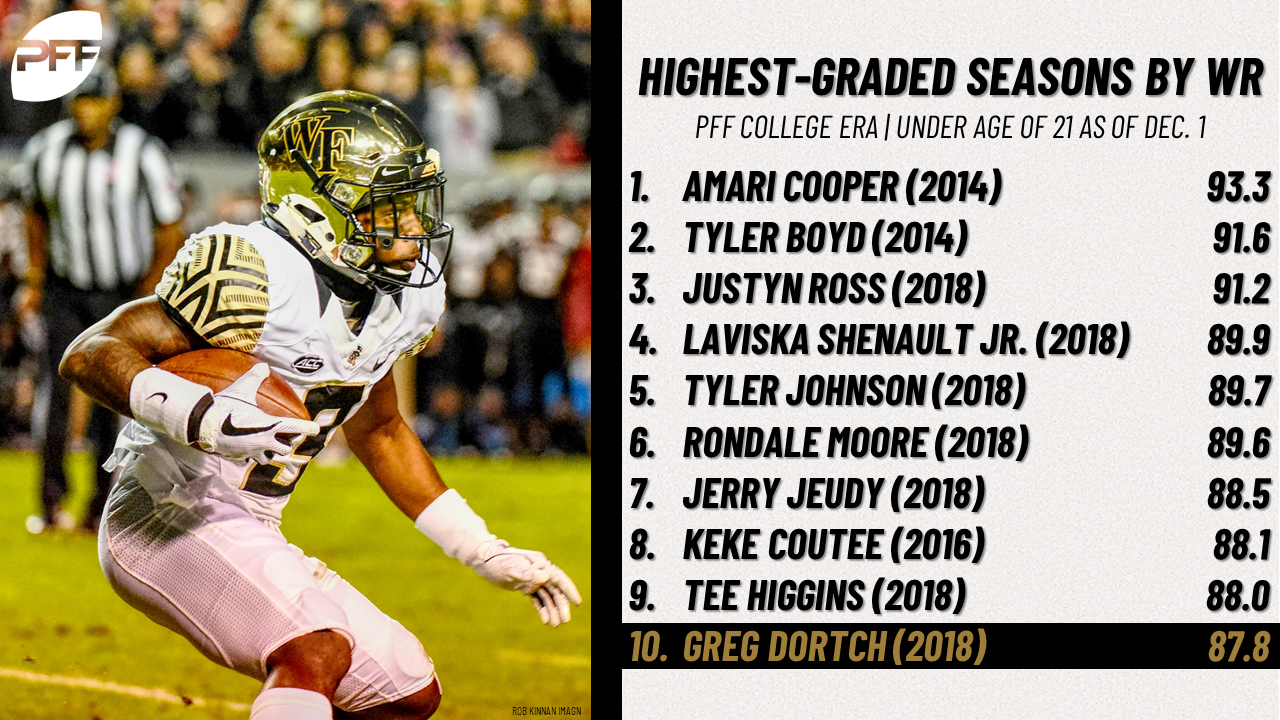 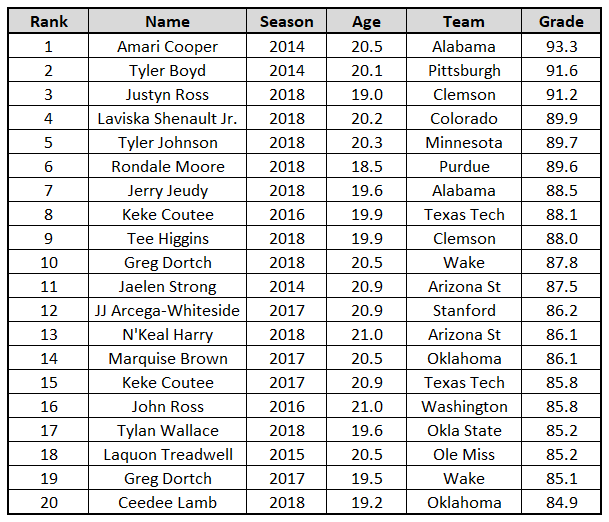 JuJu Smith-Schuster just missed this list (25th) but we’ll get to him a little bit later.

Cooper and Boyd shouldn’t be surprises, as they’re two of the only four wide receivers to come out since 2014 and post 1,000-yard seasons.

Only two players made this list more than once: Coutee and Dortch. Both, I think, were surprises, so let’s briefly talk about the both of them, as well as the three other wide receivers from the 2019 draft class (Brown, Harry, and Arcega-Whiteside).

Based on Coutee’s performance in this chart, as well as everything discussed last week about his fantasy potential, Coutee is a screaming value in both dynasty and redraft leagues. Bizarrely, he’s cheaper in dynasty leagues (WR52) than redraft leagues (WR49), despite being two weeks younger than Arcega-Whiteside (WR46) and almost two months younger than Andy Isabella (WR51).

Dortch escaped the 2019 NFL Draft as a free agent. Although undrafted free agent wide receivers rarely pan out for fantasy (Doug Baldwin, Wes Welker, Victor Cruz, and Adam Thielen are rare exceptions), I like Dortch’s odds, and not only based on where he ranked here.

Dortch played in just two seasons at Wake Forest, totaling 142 career receptions, 1,800 receiving yards, and 17 touchdowns. Over that span, he was our highest-graded slot wide receiver. He was also our third-highest-graded punt returner last year (of 49 qualifying), and ranked top-10 in 2017 as well. He did all of that, while playing with a broken bone in his wrist. He also ran a 4.49-second 40-yard-dash at his pro day. And he doesn’t even turn 21 until next week.

Despite the lack of draft capital behind him, as Adam Gase’s potential slot wide receiver in New York, he’s well worth a roster spot in deep dynasty leagues.

Unlike Dortch, the other 2019 rookies (Brown, Harry, and Arcega-Whiteside) all have a good deal of draft capital behind them. Despite being young for this class, Brown and Harry should be immediate contributors in Year 1.

Baltimore is missing their two most-targeted wide receivers from a season ago (Michael Crabtree and John Brown, 189 combined targets), and New England will be without Rob Gronkowski, Josh Gordon (likely), and Chris Hogan in 2019 (189 combined targets). Arcega-Whiteside is less likely to be an immediate contributor, but has good long-term potential. All three were among my favorite prospects during the pre-draft process as well.

Harry was the top breakout age superstar from this class, using the original methodology of tracking yardage and touchdown market share. Brown was historically dominant in both yards per route run and depth-adjusted yards per target, two of my favorite metrics for evaluating wide receiver prospects. Arcega-Whiteside earned his own hype-piece here, after an impressive pro day and by dominating in a number of other metrics I find especially valuable. Harry ranks first-overall (WR1), Brown ranks sixth (WR3), and Arcega-Whiteside ranks 12th (WR8) in my dynasty rookie rankings.

Next, I wanted to dive a little bit deeper and look at our highest-graded seasons before a wide receiver turned 20 years old. Using the same methodology as before, here’s the top-10 list: 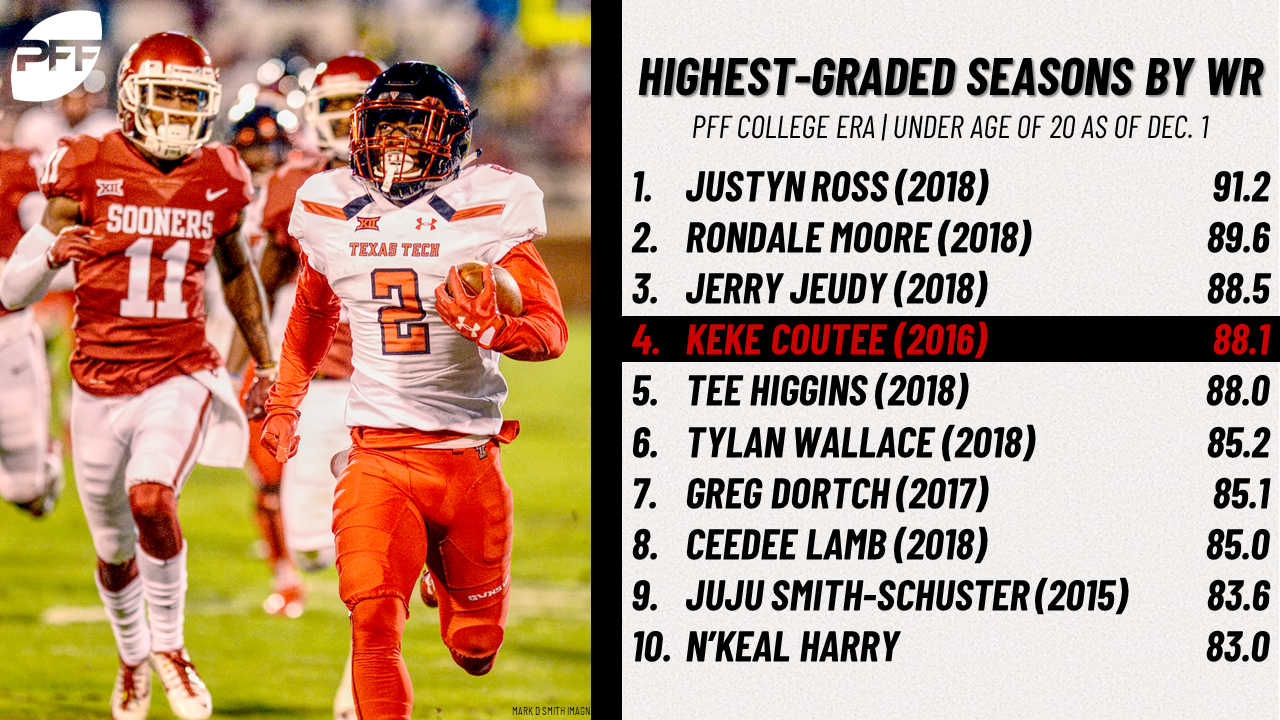 And here’s every season where a wide receiver earned a grade of at least 75.0 before turning 19 years old: 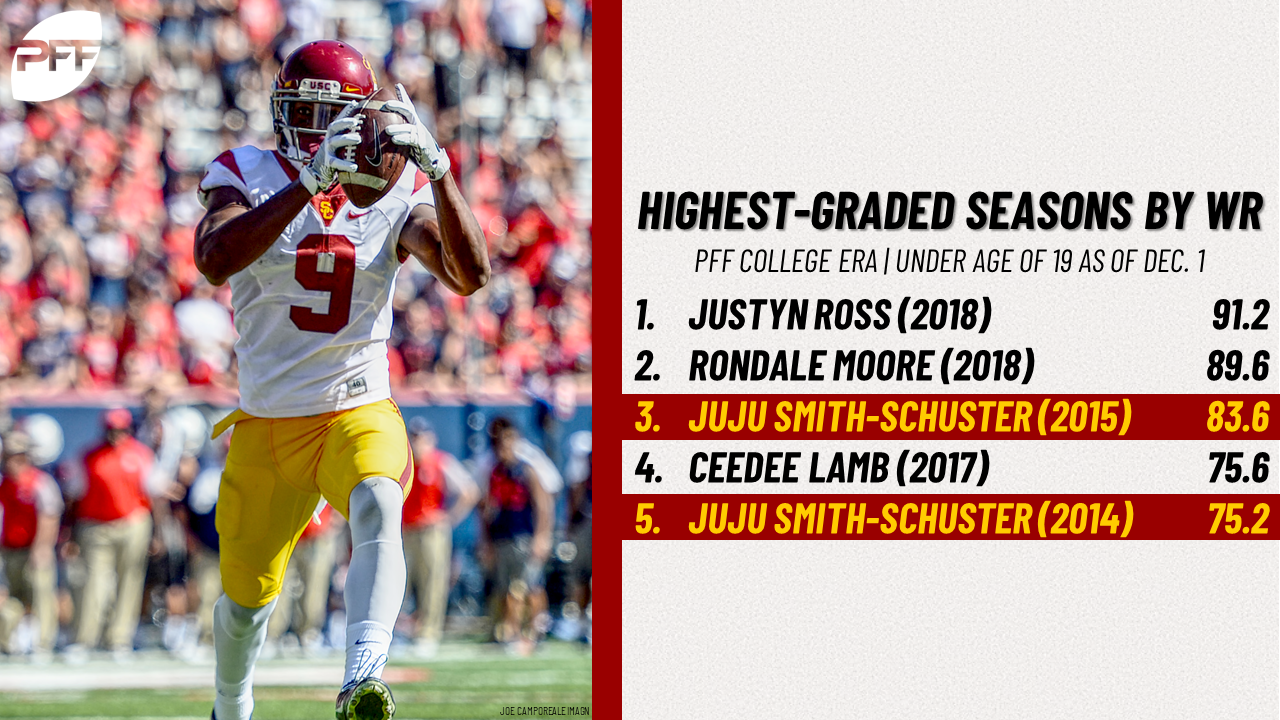 However, what first jumped out to me was how many of these players (all of them save for the four just mentioned) have not yet declared for the draft. All of the data have suggested, and many draft pundits have agreed, that these last five wide receiver classes have been historically weak — at least compared to the famed 2014 draft class or the running back classes that have followed. This exercise has corroborated that narrative, but also makes a case that the 2020 and 2021 wide receiver classes are special and could buck that trend.

Jerry Jeudy, Ceedee Lamb, Laviska Shenault, Tyler Johnson, Tee Higgins, and Tylan Wallace all made at least one of our three charts, and all six are eligible to come out in 2020. Justyn Ross (who just set the PFF College record in yards per route run) and Rondale Moore, given their grades respective to age, might be truly generational prospects in 2021.

While it’s true that every year dynasty players say that the next year’s class is going to be a lot better than the current year’s class, this is the first year I’m saying it. The 2020 class, as well as Ross and Moore, have the chance to be very special. I’d start trying to acquire and hoard first-round rookie picks from those classes now.

(One note: Alabama WR Jaylen Waddle may have qualified on either of these charts, earning a 89.7 grade as a freshman last season [2021 class]. However, that can't yet be confirmed without an accurate birth date.)

Special thanks to Jon Moore and Adam Harstad for their help with this article. Special shout out to the legendary Shawn Siegele for coming up with breakout age in 2014.