In fantasy football, yards per route run (explained more in detail here) is one of our most powerful metrics when projecting fantasy points in the following season (at the NFL level). For this reason, it was the first metric I turned to when it became time to research the incoming class of rookie wide receivers from a fantasy standpoint.

Take everything that follows with a grain of salt, considering Eric Eager and George Chahrouri found little predictive power in the stat when contrasting efficiency from the NCAA to the NFL level. At the very least, however, I do think it’s interesting so many of college football’s most efficient wide receivers (on a yards per route run basis) were drafted so highly by NFL teams, and perhaps this metric matters most only at the polar extremes.

PFF first started grading college players in 2014. Since then, there have been 2,043 instances of a wide receiver running at least 200 routes in a single season. Of those 2,043 instances, here are the top 18 seasons by yards per route run: 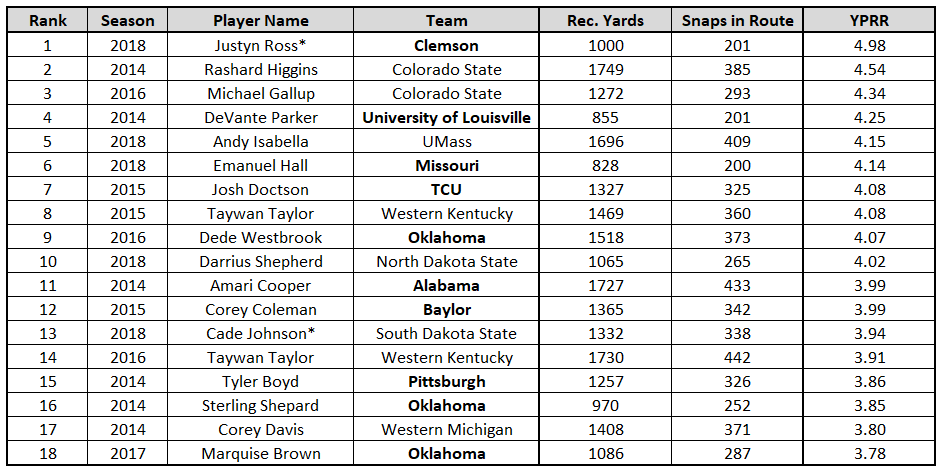 Note: Teams in the Power-5 conference are listed in bold.

Four of our 18 best seasons have come from wide receivers who are draft-eligible this year: Andy Isabella (fifth), Emanuel Hall (sixth), Darrius Shepherd (10th), and Marquise Brown (18th). Two receivers have yet to declare: Justyn Ross and Cade Johnson. All other wide receivers on this list are currently in the NFL. (That’s a pretty good hit rate.)

On this list we have four wide receivers who were drafted in the top-15 overall: Amari Cooper, Corey Davis, DeVante Parker, and Corey Coleman. Josh Doctson was also a first-round pick. Sterling Shepard and Tyler Boyd were both selected in the second round. Taywan Taylor and Michael Gallup were taken in the third round, while Dede Westbrook (who won the Biletnikoff and likely would have been drafted higher in not for off-the-field concerns) and Rashard Higgins were taken in the fourth and fifth rounds, respectively.

While it’s impressive that all of these players were drafted highly by NFL teams, it’s probably important to note that very few have found immediate success at the NFL level.

Let’s take a look at the wide receivers who stood out: 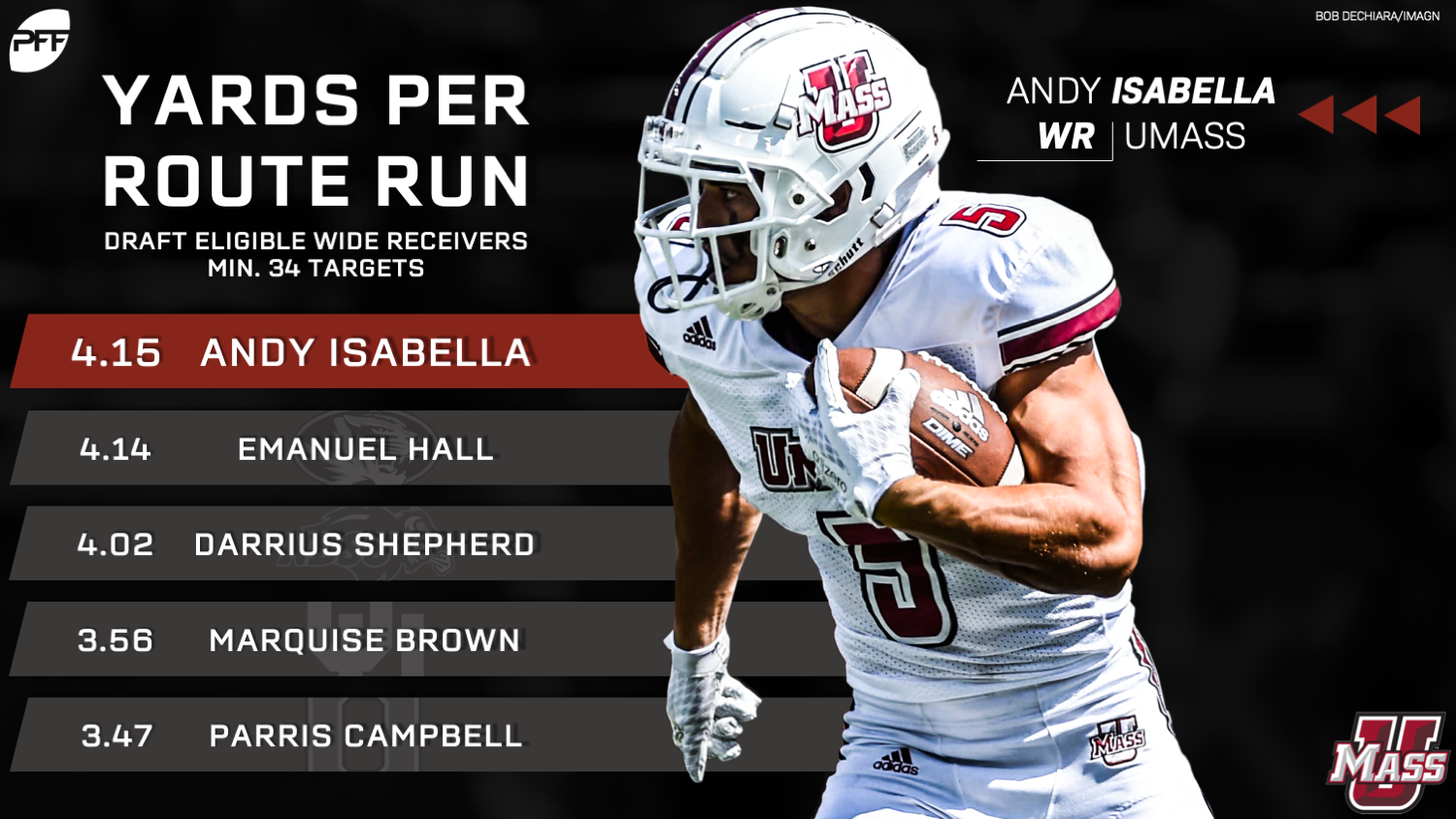 Isabella ran a 4.31-second 40-yard-dash at the combine, which ranks 10th-best of 879 wide receivers at the combine since 2000. Contrary to public sentiment, Isabella ran the majority of his routes lined up outside (57.7%) last year.

The one knock on Isabella is that he played against softer competition, playing outside of the Power-5 at UMass. Still, he’s dominated against Power-5 teams throughout his career, catching 30 of 40 targets for 519 yards and three touchdowns. His 12.91 yards per target against Power-5 teams over the past two seasons ranks second-best among all combine-invite wide receivers.

At the combine, Hall ran a 4.39-second 40, and posted the third-best vertical jump and the best broad jump of any wide receiver since 2000.

Hall dealt with a groin injury for much of the 2018 season but didn’t let that get in the way of him posting a historically efficient season, and not just in terms of yards per route run. On 61 targets in 2018, his quarterbacks averaged a 137.5 passer rating when targeting him. That number was slightly better in 2017, at 138.8 on (again) 61 targets. When contrasted with team efficiency (100.6 passer rating in 2018, 109.1 passer rating in 2017), he was our most efficient wide receiver by WR rating over the past two seasons.

He's not without his warts, however. His career drop rate of 14.6% ranks second-worst of all combine-invite wide receivers in this class. He might also be something of a one-trick-pony, overly reliant on the deep ball. A whopping 65% of his career receiving yards have come on deep passes.

Small-school slot wide receiver Shepherd was our second-highest-graded wide receiver in 2018 but wasn’t invited to the NFL Combine. Non-combine-invite wide receivers rarely pan out at the NFL level, and though he might be a decent late-round sleeper for dynasty rookie drafts, he isn’t really on my radar.

Brown played predominantly on the outside in college but did excel when running routes inside. Over the last two years, he averaged 7.52 yards per route run from the slot, which ranks best of all 435 wide receivers with more than 100 slot routes. The next-closest player over this span averages just 4.46 yards per route run from the slot. Perhaps a full-time move to the slot might better serve him in the NFL and mask size-related deficiencies. In any case, he’ll be a massively boom-or-bust pick in dynasty rookie drafts, and especially now, coming off Lisfranc surgery in February.

All four wide receivers on this chart seem like compelling sleepers at current dynasty ADP.

By current best ball ADP, all of Brown (ADP: Round 18), Isabella (ADP: Round 20), and Hall (ADP: UDFA) are worth investing in at their respective price tags. All have high-end speed and were exceptionally productive on deep targets in college, which lends itself well towards the best ball format.

I’ll have my official rookie rankings out soon, but in the meantime, look out for the PFF Draft Guide (out now and continually updated), which is always my No. 1 resource for evaluating the incoming class of rookies for fantasy.