Blip or new normal? The high-water marks in QB/RB fantasy scoring in 2018

With scoring around the league in the rise in 2018, plenty of teams set recent-history highs in fantasy football scoring and production. Sometimes, it’s a team on a steady climb reaching a high note. Others, it’s a random career year or years bringing a team to its crest.

On Saturday, I took a look at teams that set their low marks in fantasy scoring at a position group in 2018 over recent history (2006-present), looking for which marks were blips and which were the new normal. Today I’m doing the same with the high-water marks.

As noted Saturday: Because of the aforementioned spike in scoring in 2018, there were far more highs than lows. Across 128 positions groups (QB, RB, WR, TE for 32 teams), only eight set 13-year lows, while 23 set highs. As such, I’m splitting this into two pieces. Below are the highs for quarterback and running back. Click here for wide receiver and tight end. 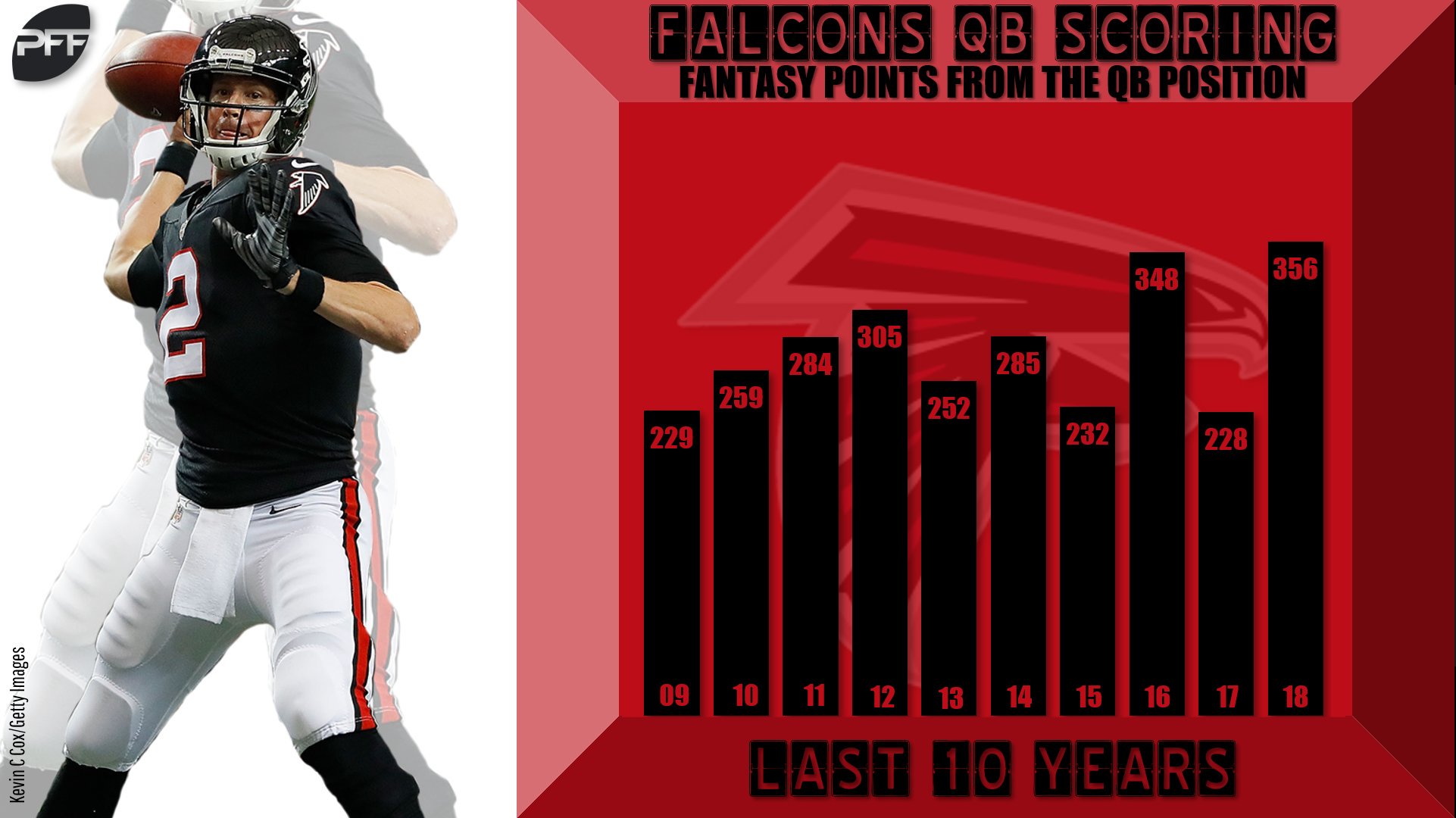 Matt Ryan has intermittently been one of the league’s best fantasy quarterbacks, so the fact that he put up slightly more points than he has in the past isn’t that remarkable. That said, he just put up the 14th-most QB fantasy points of all-time. He’s good, but that might have been too good.

Blip or new normal: Ryan could continue to be a top-five fantasy quarterback for five more years and not put up a season like that again. Blip. 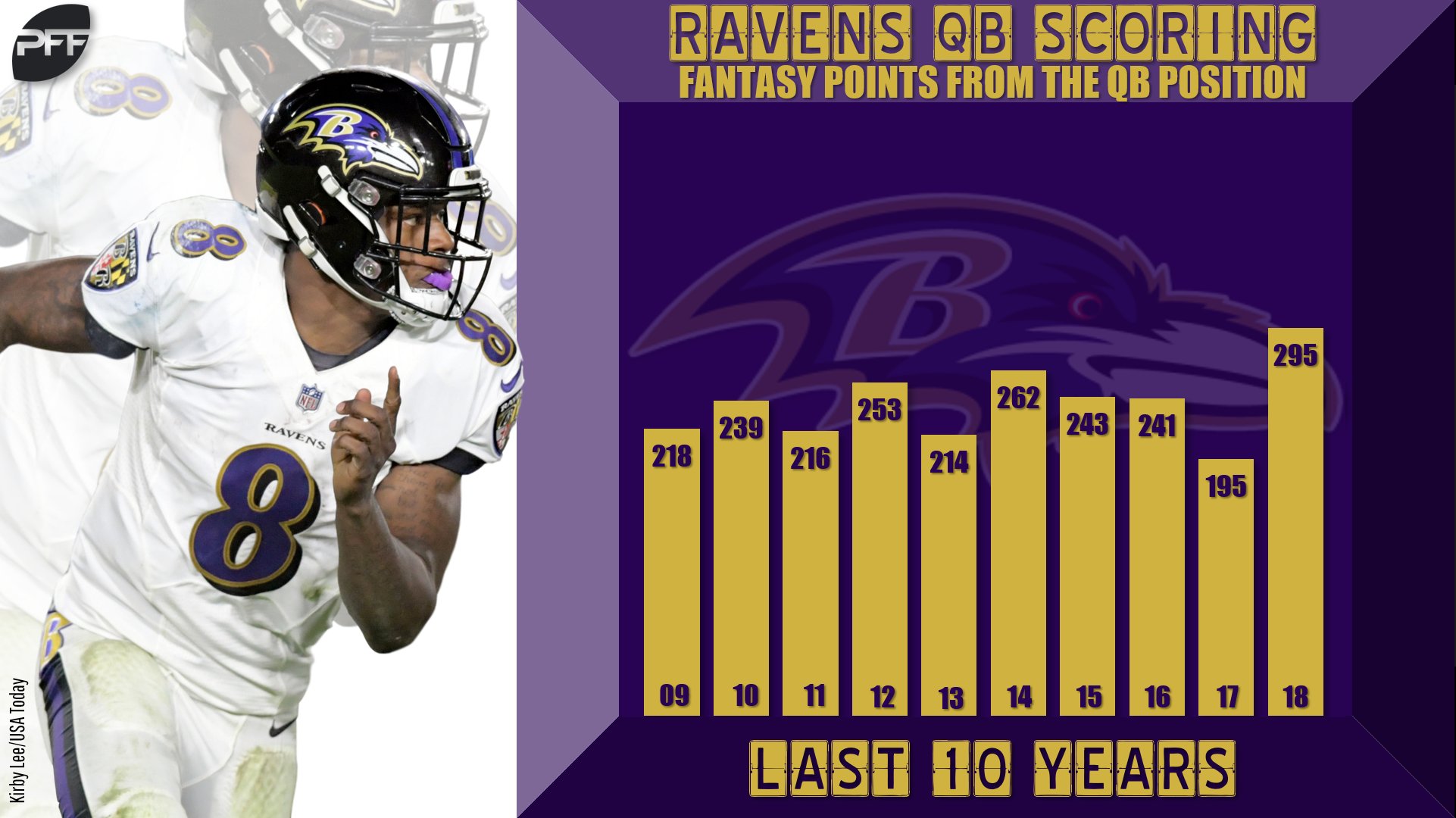 If you want to argue Joe Flacco is (or was) a better NFL quarterback than Lamar Jackson is (or will be), I’ll listen to that. But for fantasy, it’s not really a contest. Jackson put up 141.0 points in seven games as the starter, Weeks 11-17, compared to 145.1 for Flacco in nine games as the starter. That’s 20.1 per game for Jackson, 16.1 for Flacco. Even accounting for the work Jackson got off the bench when Flacco was the starter, there’s a clear lean in favor of the guys with the rushing skills. 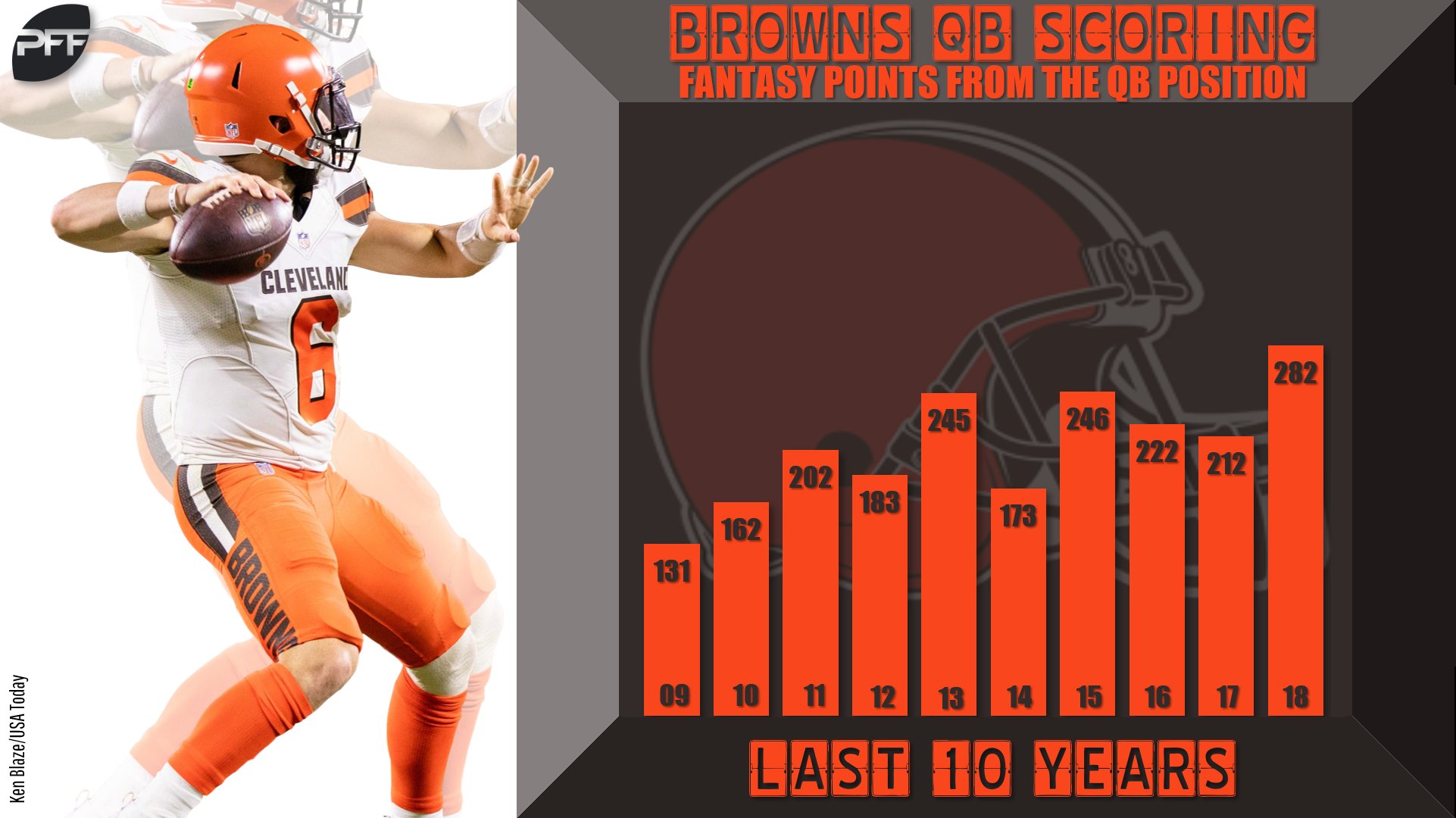 Do you need much of a writeup here? The Browns have had a legendarily bad quarterback situation since they re-came into existence. Then they got Baker Mayfield. 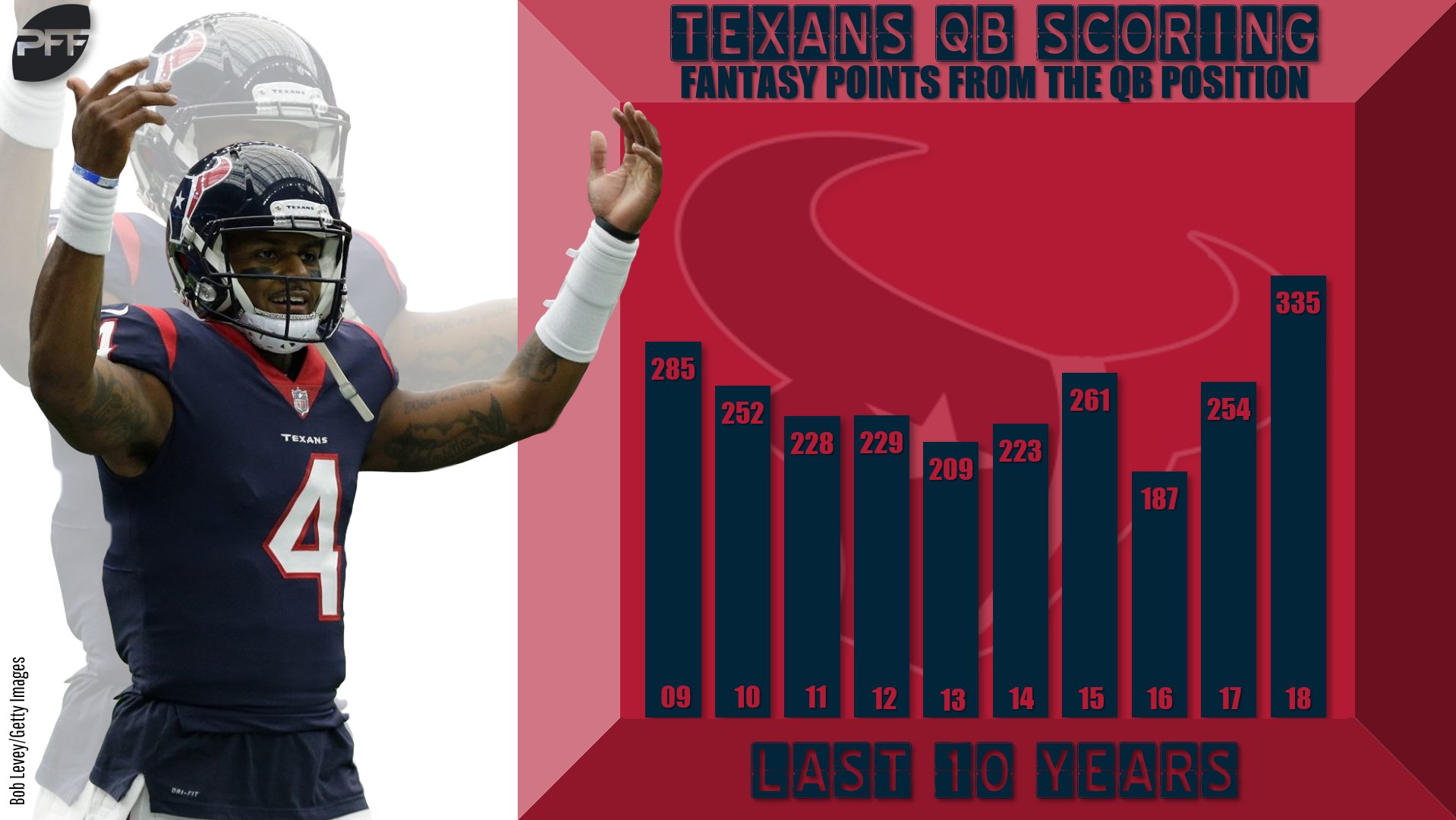 In about a year and a half as the starter, Deshaun Watson is already No. 3 all-time in Texans QB fantasy points, behind Matt Schaub (2007-2013) and David Carr (2002-2006). With a decent 2019, he’ll be second. The Texans haven’t had Browns-level futility at the quarterback position, but it hasn’t exactly been great, either. Watson is the most electric player they’ve had.

Blip or new normal: Same as the Browns. Watson’s very good. If they can keep him upright, he should keep producing. 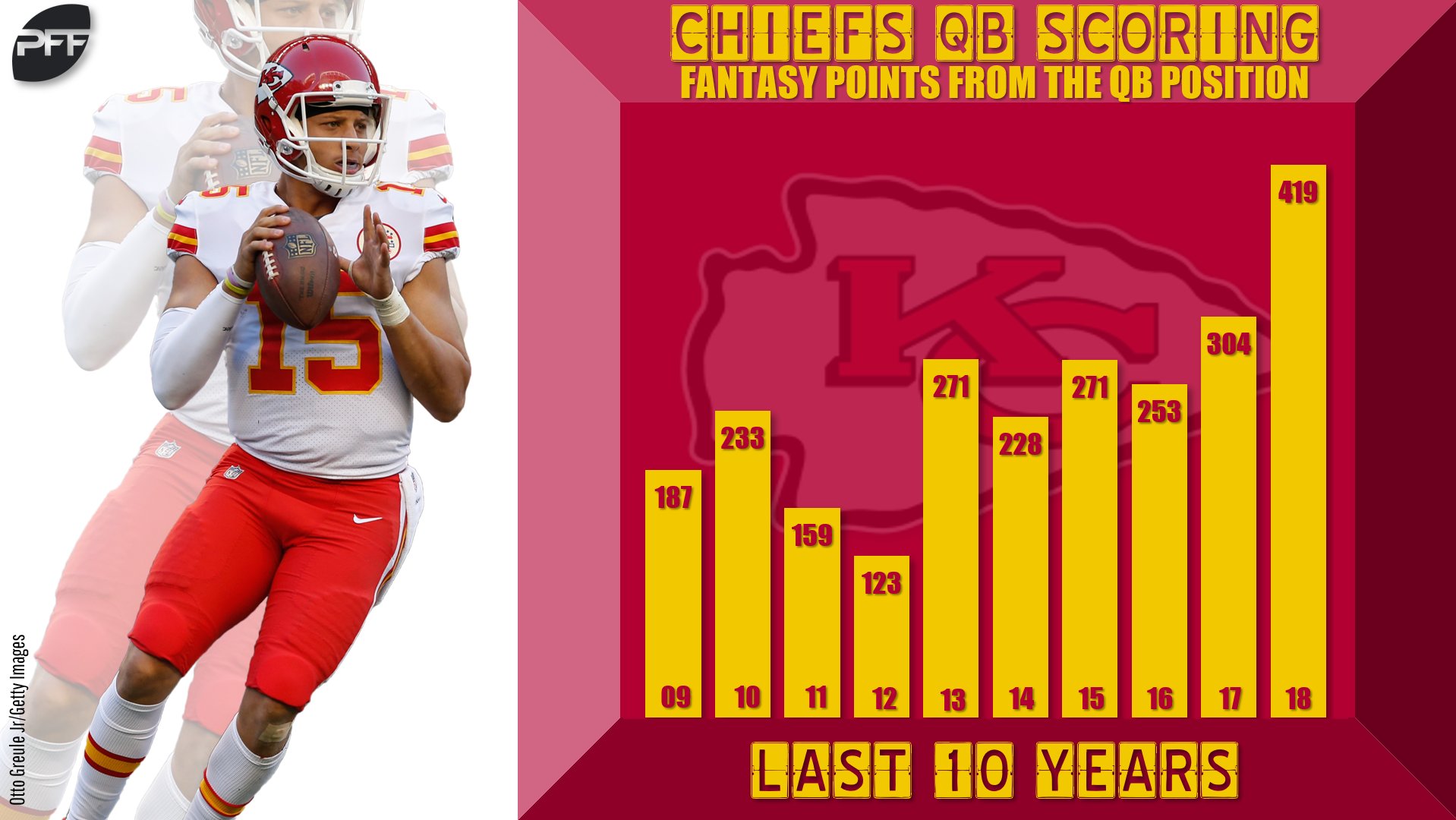 Patrick Mahomes just put up the best QB fantasy season of all time. The Chiefs once had a season (2012) with 122.5 points out of the quarterback position when Matt Cassel and Brady Quinn combined for 8 touchdowns and 20 interceptions. Eight touchdowns is a decent two weeks for Mahomes; 20 interceptions is a reasonable two seasons, based on how he started.

Blip or new normal: Well, this question is actually interesting. The all-time QB scoring lead is a blip. But for a team that topped out with Alex Smith’s career year in 2017 and then topped that by more than a hundred points, it’s a brave new world in Kansas City. 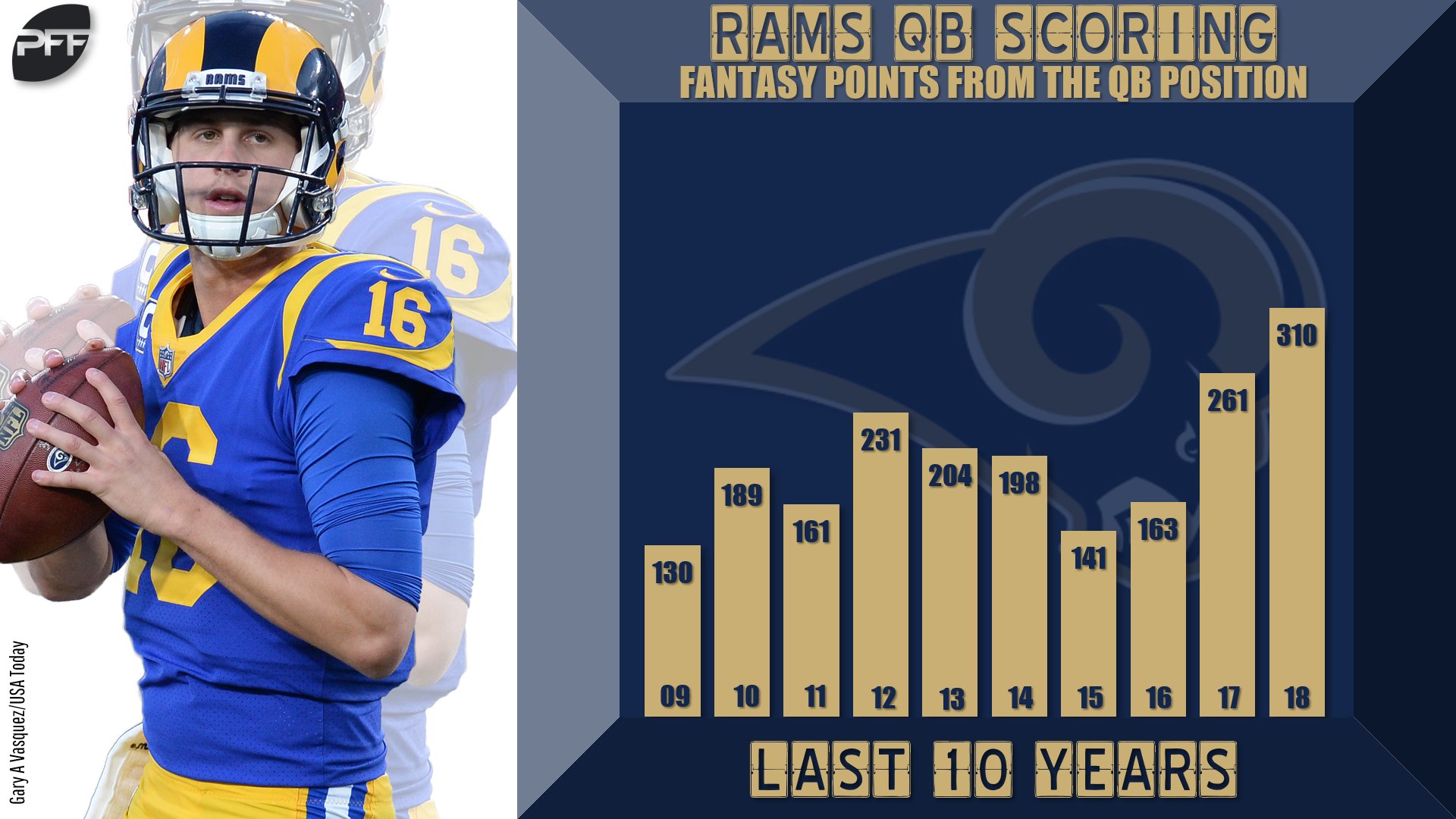 Jared Goff arrived in 2016, and the Rams got 163.0 fantasy points out of their quarterbacks. Sean McVay arrived in 2017, and that number went to 260.5. Both additions were obviously factors in the improvement, but you’d be hard-pressed to make the argument that it’s more Goff than McVay. And that’s good for the Rams, because a quarterback can be tanked by a bad head coach, but a good head coach can elevate a quarterback.

Blip or new normal: With a big Week 1 in 2019, Goff could pass Sam Bradford for the most total Rams QB points since 2006. But we already know McVay is better than Jeff Fisher and company were. New normal. 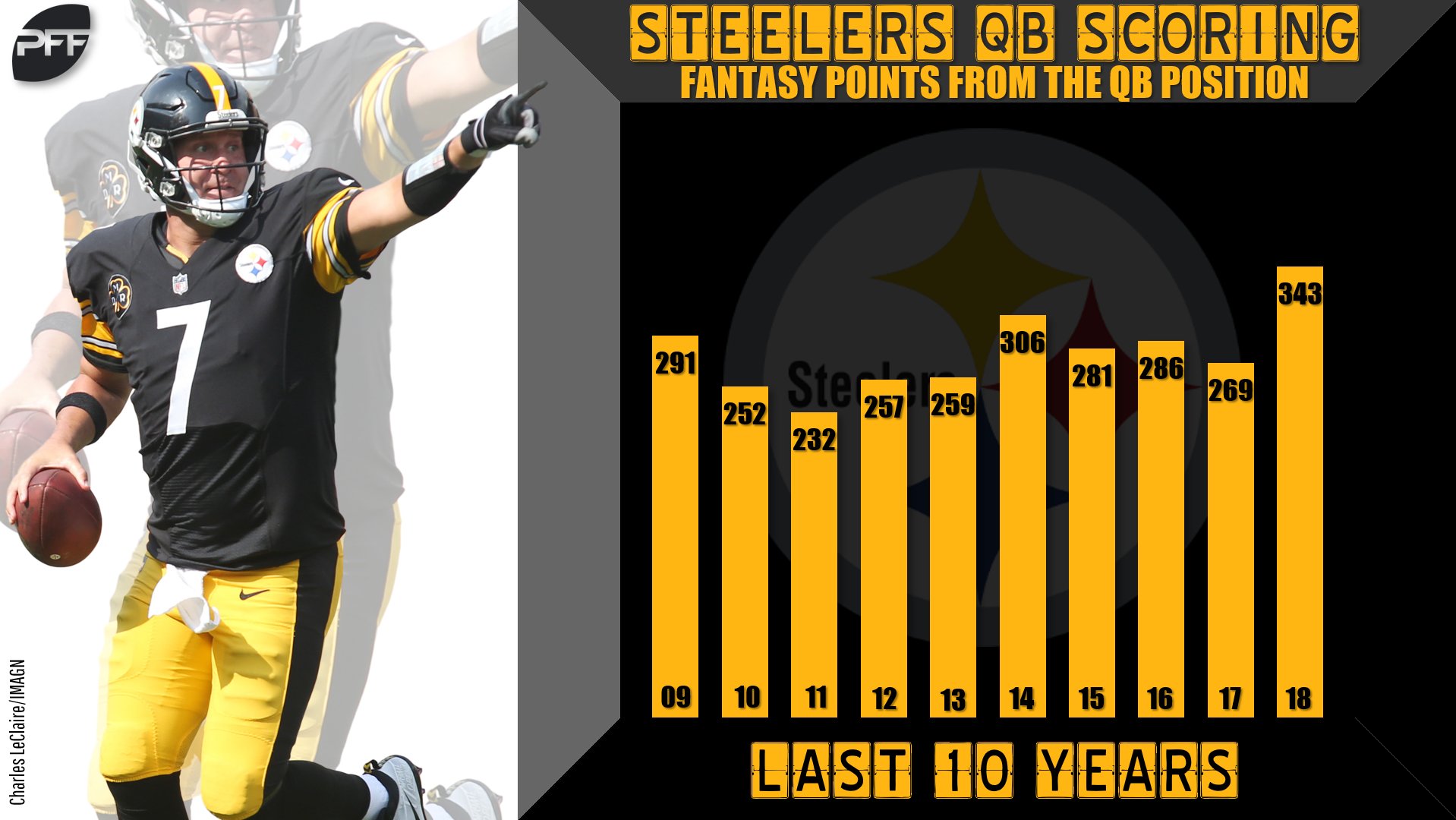 Ben Roethlisberger put up the quietest career year for a longtime starter ever, putting up his best season by nearly 40 points. He set career-highs in passing yards (5,129), passing scores (34), and even rushing touchdowns (3).

Blip or new normal: Antonio Brown is gone, replaced by signee Donte Moncrief and holdovers James Washington and Ryan Switzer. Le’Veon Bell is gone as well, not that he contributed to 2018. And Roethlisberger is 37 now. He’ll probably still be good in 2019. But that good? Blip. 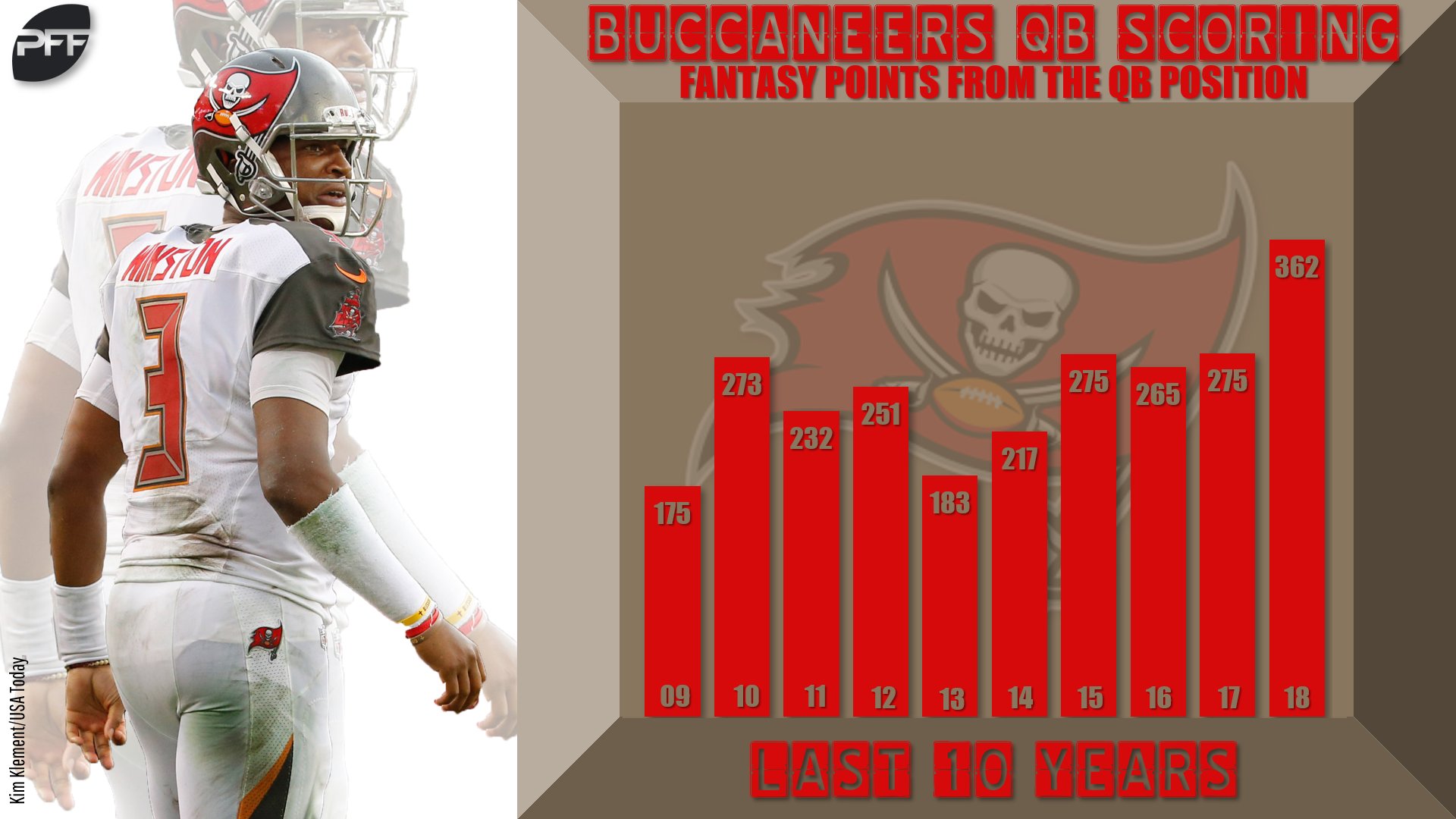 As mentioned above, Matt Ryan put up the 14th-most QB fantasy points of all time in 2018. And even with that, the Buccaneers outscored the Falcons at the position. Only they did so with the division of Jameis Winston and Ryan Fitzpatrick alternating between other-worldly performances and bench-worthy performances. It was a weird year.

Blip or new normal: Winston has enough talent to perform at that level again, but he’s never shown he can be nearly consistent enough to do so regularly. That level was a blip.

13-year high at running back 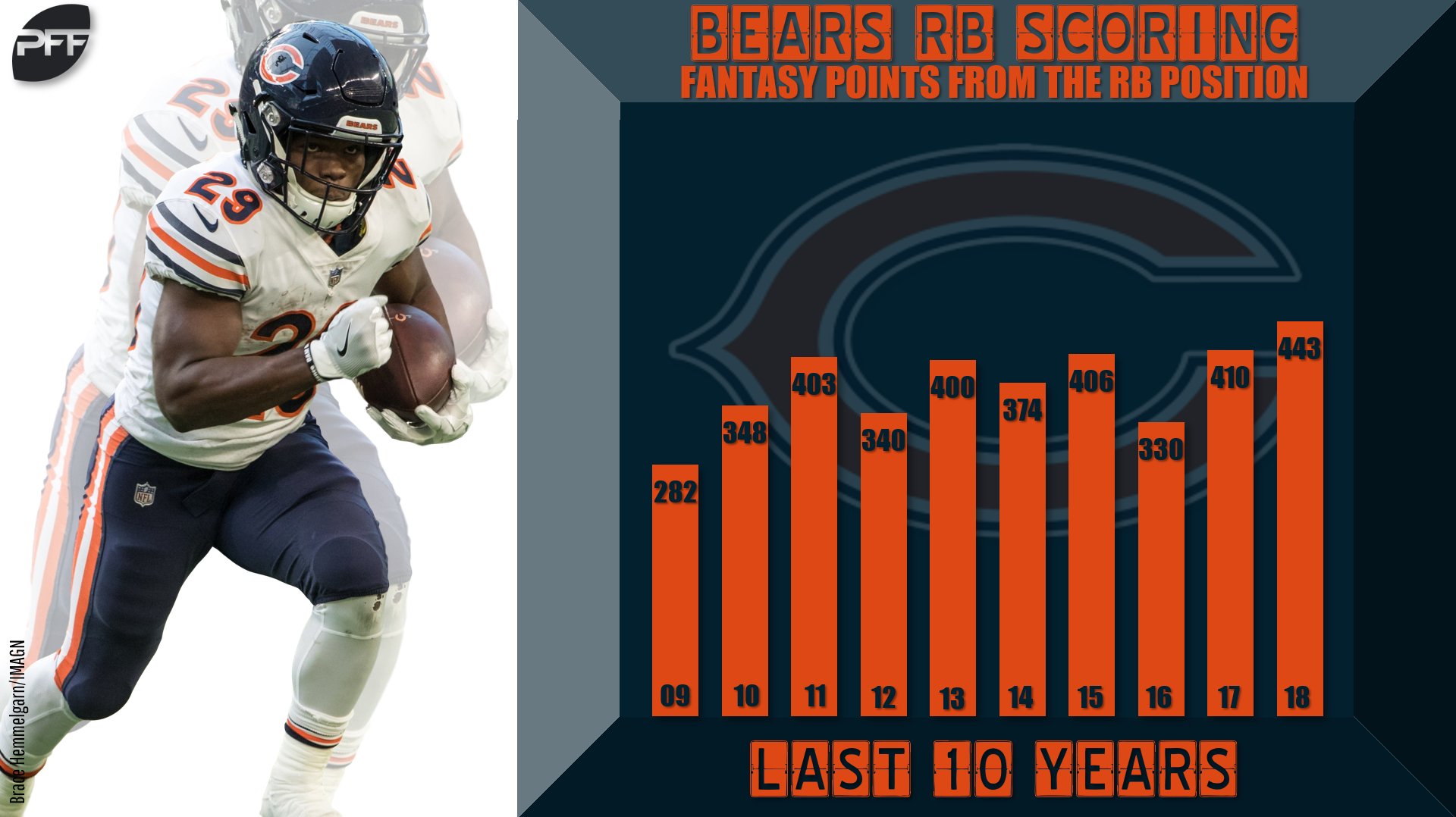 That’s right, the Bears set a generation high in backfield fantasy production last year, better than any Matt Forte season. Forte still holds the top four, and eight of the top 10, individual RB seasons over our timeframe, but the duo of Jordan Howard and (primarily) Tarik Cohen combined to top him, because Forte generally put up his production as the bell cow, not getting much help from other Bears.

Blip or new normal: Howard is gone now, replaced by (so far) Mike Davis. Cohen has established himself as one of the league’s top pass-catching running backs. Still, the Bears backfield set a high-water mark that it likely won’t reach again. It’ll still be very good, but this is a blip. 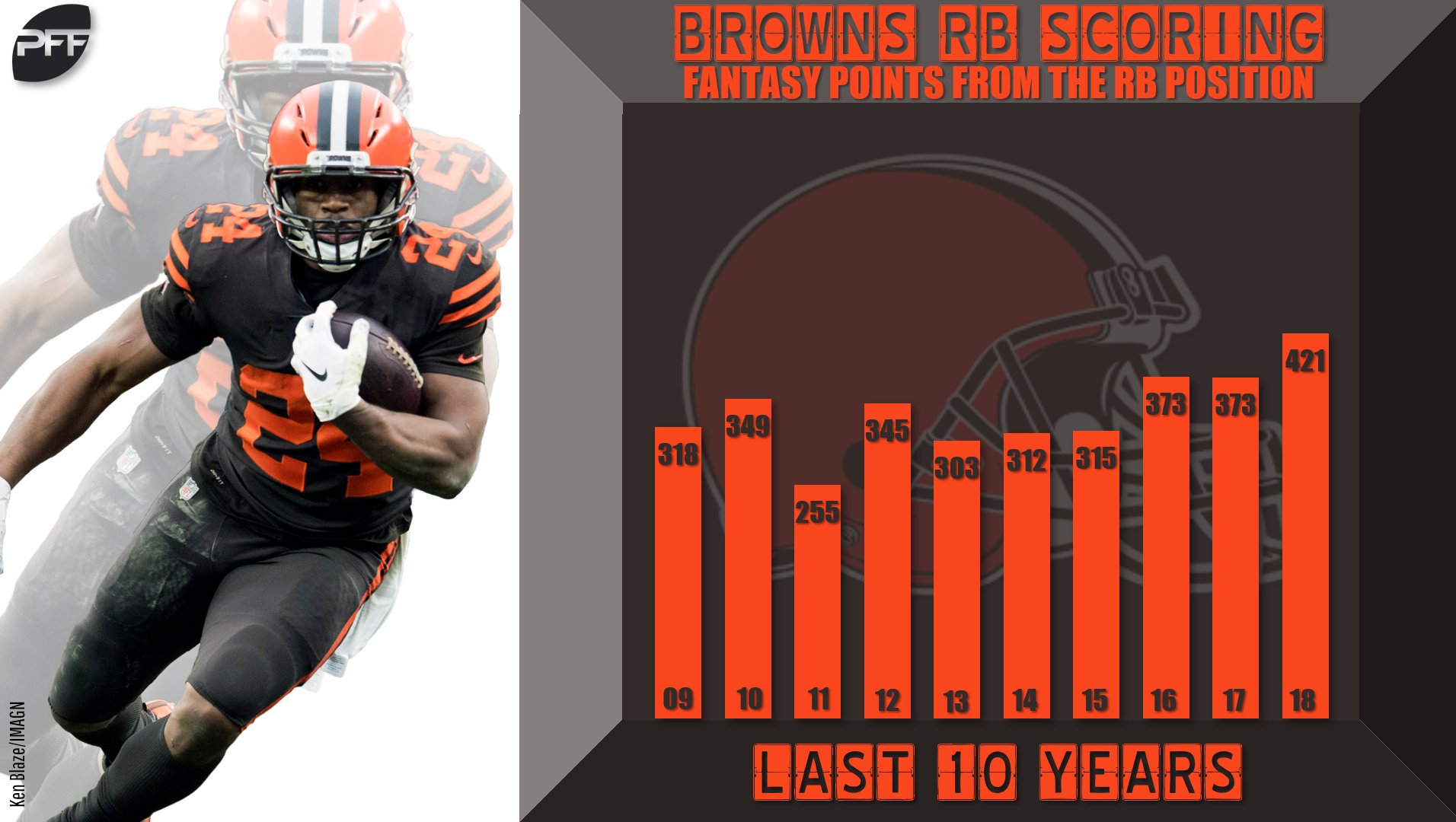 A rising tide lifts all boats. You’ll see the Browns again in the wide receiver section.

Blip or new normal: A backfield with Nick Chubb, Kareem Hunt, and (for now at least) Duke Johnson? New normal for sure. 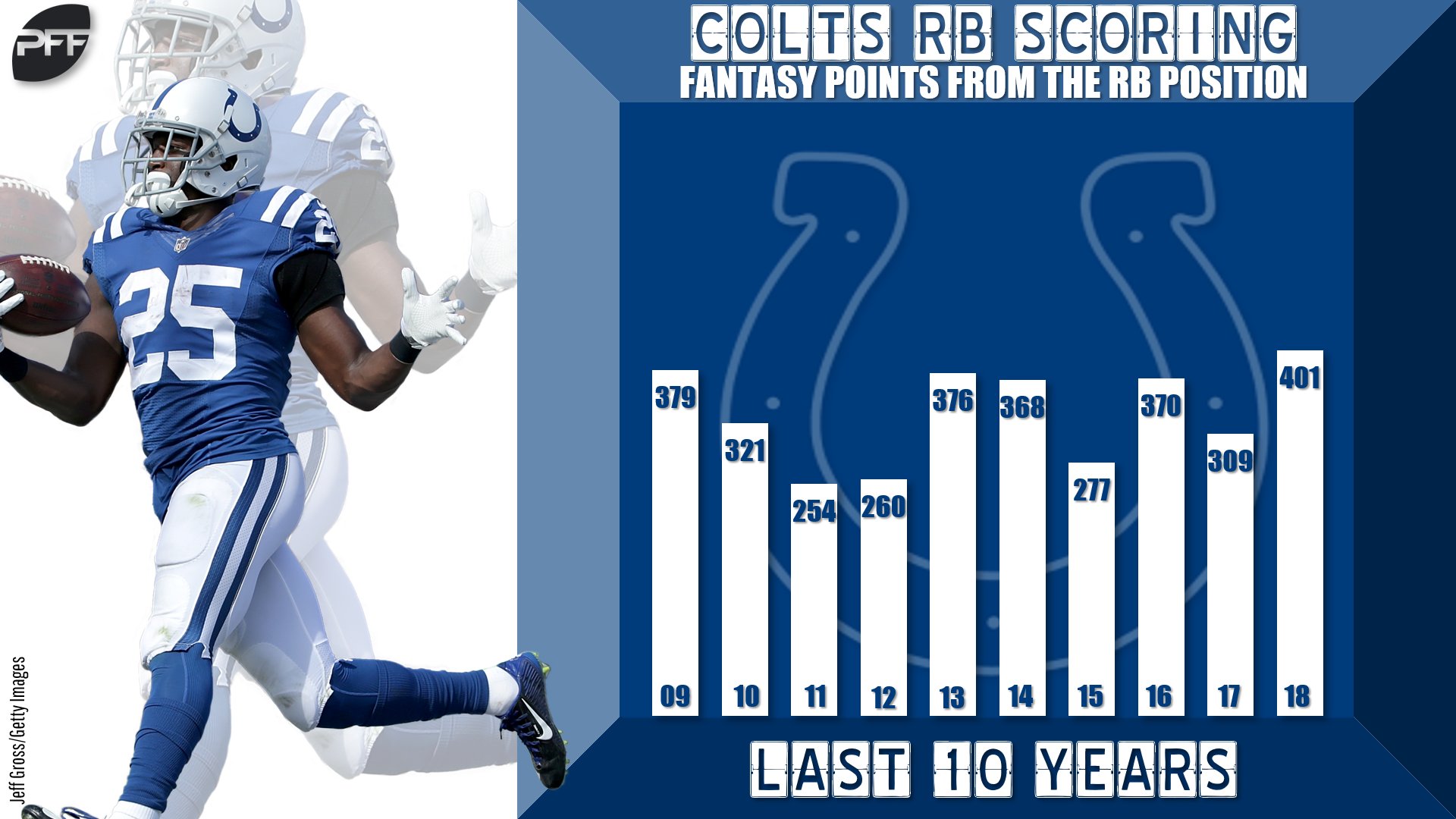 The Colts went almost 10 years, from 2007 to 2016, without a 1,000-yard rusher before Frank Gore crossed the threshold in 2016. Nobody got there for the team in 2018, but Marlon Mack managed 908 yards in only 12 games and Nyheim Hines contributed another 63 receptions, making for a productive backfield committee.

Blip or new normal: The Colts have finally shored up an offensive line that was the team’s big sticking point going back a long time. If that can hold into 2019 (and there’s no reason to believe it can’t), this level of RB production an be the new normal. 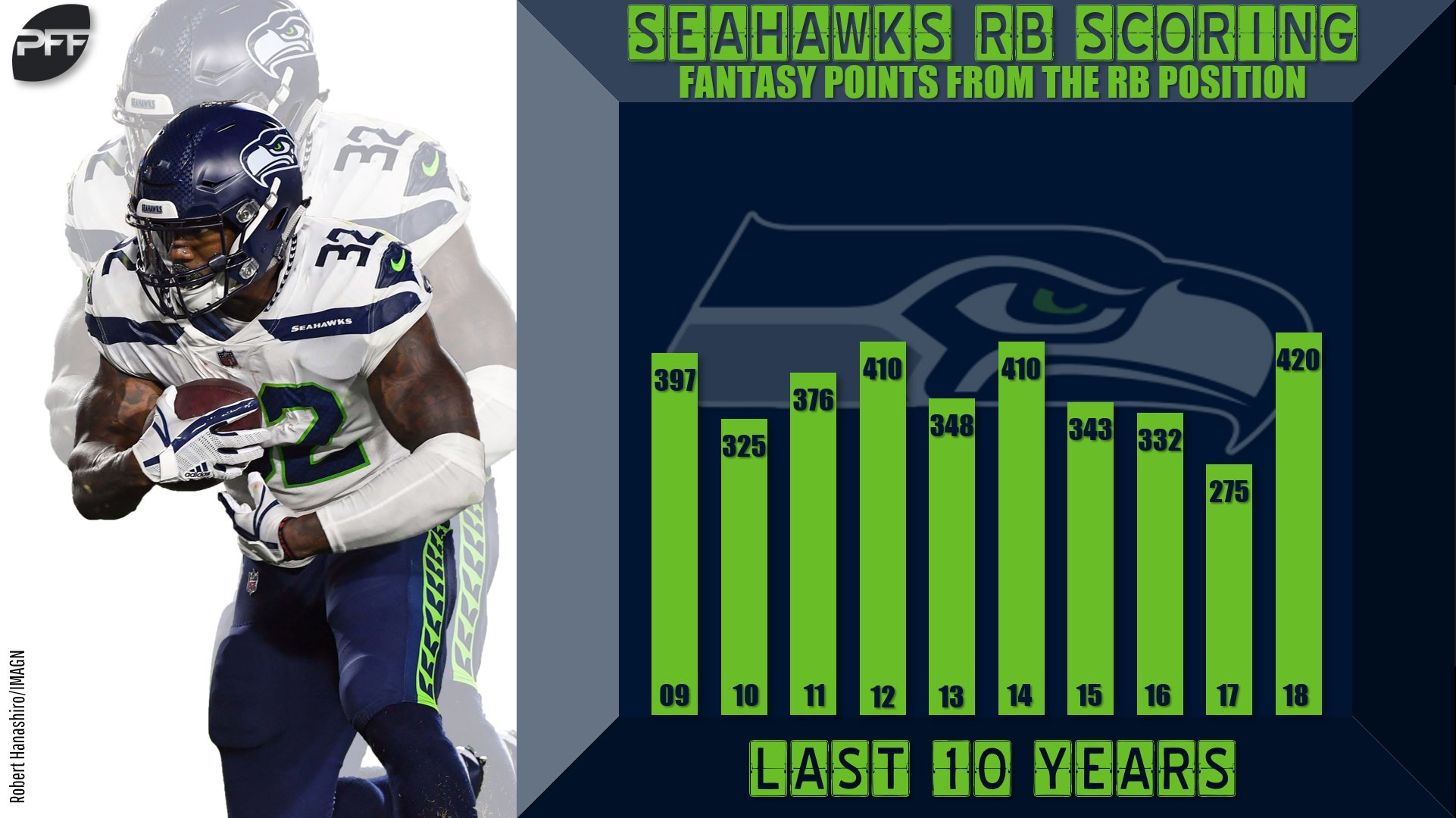 This is the biggest surprise here, right? Despite a dominant run by Marshawn Lynch for so many years in Seattle, the trio of Mike Davis, Rashaad Penny, and (primarily) Chris Carson combined for the best total. Like Forte above, Lynch did most of his work as a solo back, meaning he had big totals, but the team didn’t do much else. In 2018, though, Carson’s 201.4 points didn’t even get to half of the team’s backfield total.

Blip or new normal: Davis is gone now, but Carson and the rising Penny should make for a formidable duo in 2019, and the Seahawks appear to have rededicated themselves to the running game. New normal.