Blip or new normal? The low-water marks in fantasy scoring in 2018

Some positions on some teams have a fantasy football identity. Even as, for example, Chris Herndon had a perfectly competent rookie season, people still look at the Jets as a tight end wasteland. The Saints have gone from Darren Sproles to Pierre Thomas to Mark Ingram to Alvin Kamara, but the running back position is still a monster. That sort of thing.

So when a team goes wildly against its established precedent at a given position in a given year, it’s worth investigating. Is that a blip, meaning things should get back to normal after that? Or is it a new sign of things to come, and we should adjust our expectations for that position group in the future?

That’s what we’re looking at over the next two days. Using the last 13 years of fantasy scoring data, I’ve identified the teams’ position groups that set timespan-high or timespan-low PPR point totals in 2018, and I’ll look at what that means for 2019 and the future.

Spoiler alert: With offense hot in 2018, there were far more teams setting 13-year high fantasy totals than those setting 13-year lows. To wit: There are 128 groups considered here (QB, RB, WR, TE for 32 different teams), and only eight “lows,” compared to 23 “highs.” I’m considered the lows here today and will hit the highs on Sunday. 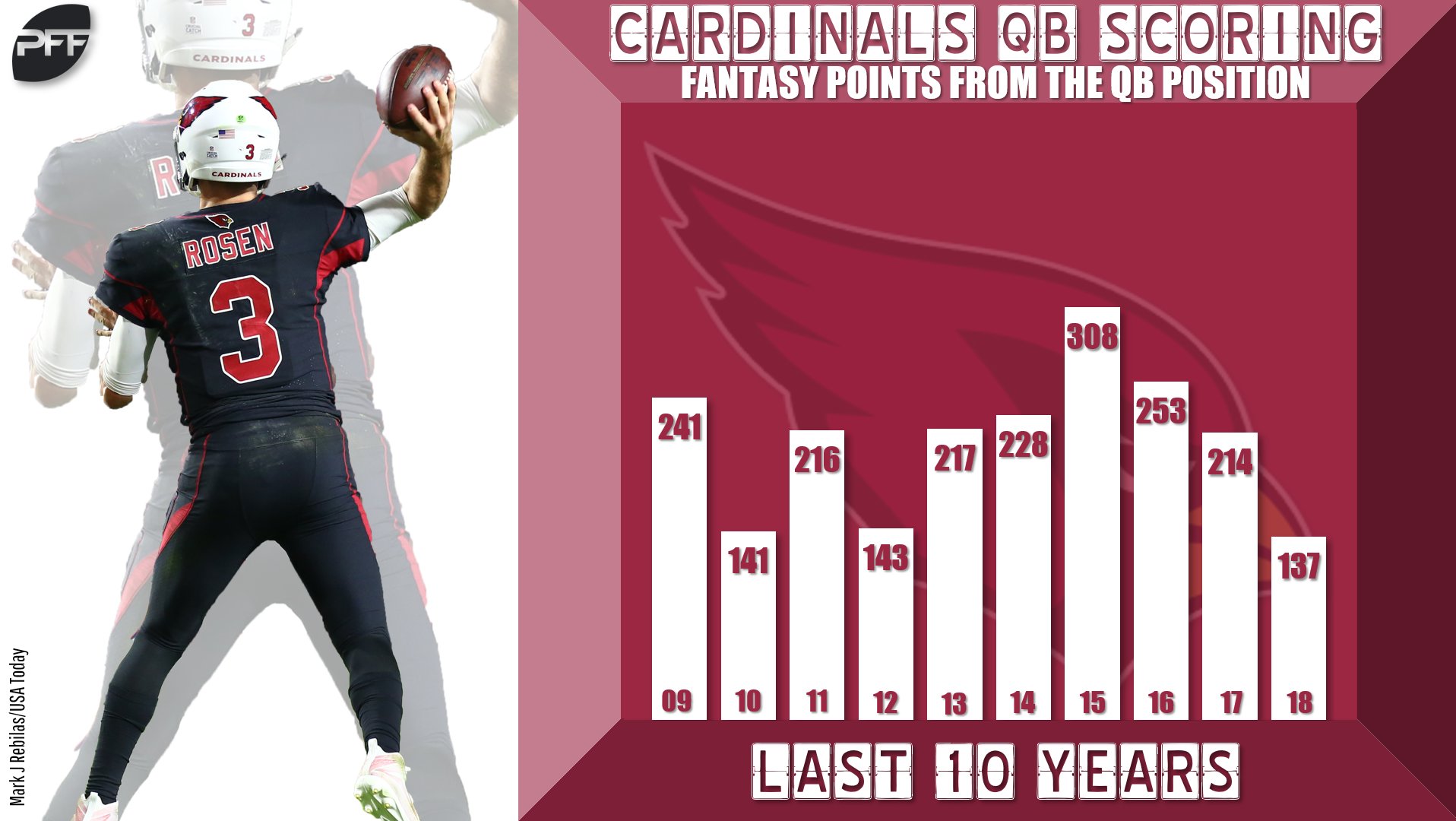 The Cardinals have had some highs at quarterback in the last generation of football (most notably Carson Palmer’s near-MVP 2015) but also some serious lows. The team got 140.8 points from a Derek Anderson/John Skelton duo in 2010, then 143.2 from Kevin Kolb, Ryan Lindley, and Skelton in 2012. The only teams with lower lows than Arizona since 2016 were Carolina, Cleveland, Jacksonville, Kansas City, and Oakland. But even with that, the season for Josh Rosen (and briefly Sam Bradford and Mike Glennon) in 2018 was the Cardinals’ worst.

Blip or new normal: Whether Rosen remains the Cardinals’ starter or the team drafts Kyler Murray late this month, you have to call 2018 a blip. Kliff Kingsbury almost has to be a better offensive coach than his predecessor in Arizona, Steve Wilks, almost by default, and Murray is an electric rookie, while Rosen has a year of seasoning after a disastrous rookie campaign. Either way, things should get better.

13-year low at running back 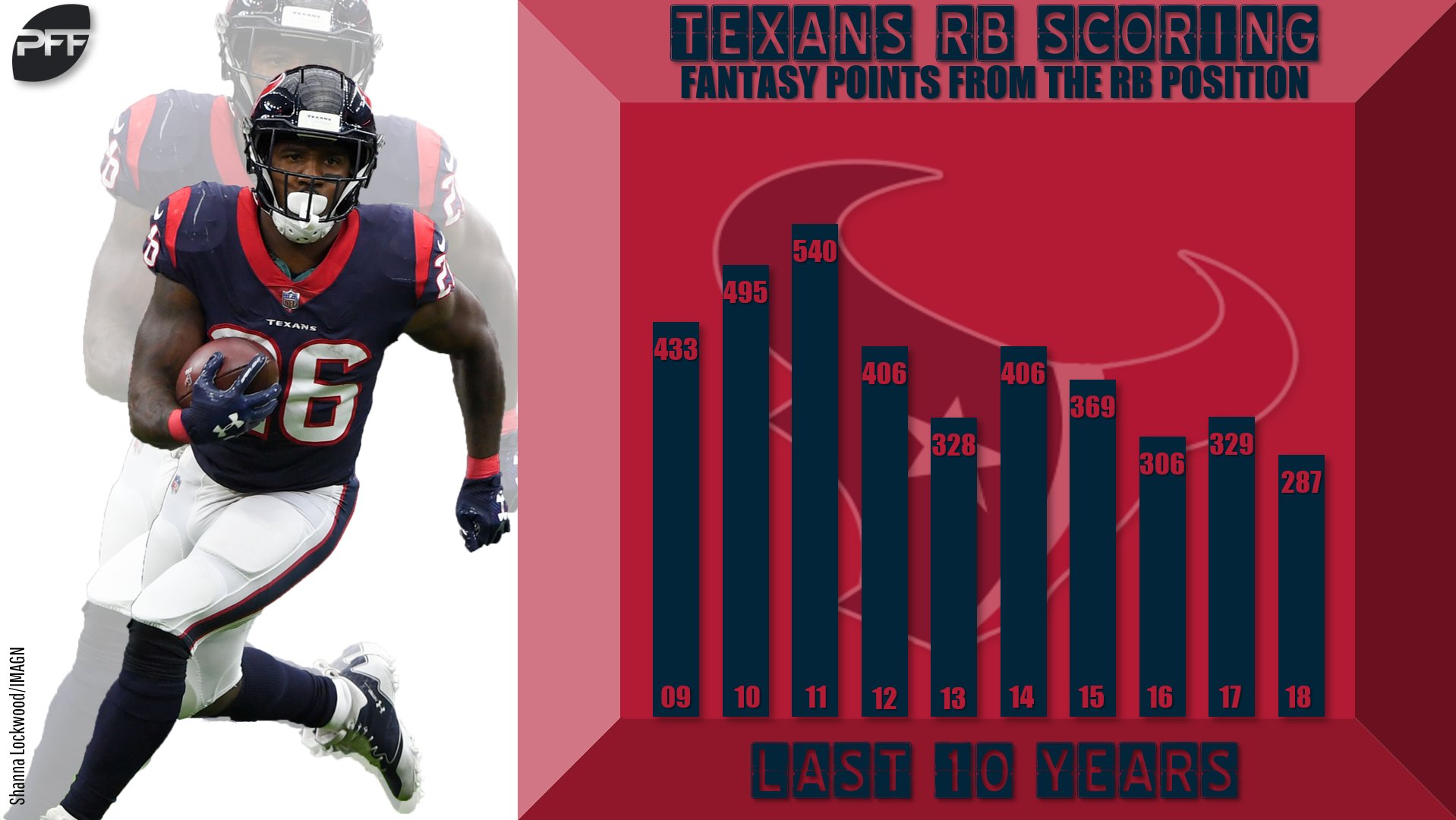 The days of Arian Foster are over in Houston. Lamar Miller hasn’t been bad with the Texans, but he hasn’t been what fantasy owners imagined he’d be since being signed away from Miami. This past year wasn’t a bottoming-out by any means — Buffalo and Tampa Bay had fewer RB points than the Texans in 2018 alone — Miller’s middling performance, combined with not much behind him in Alfred Blue and D’Onta Foreman and the league’s worst teamwide PFF run-blocking grade at 43.1 kept the Texans low.

Blip or new normal: The Texans have done almost nothing to improve the offensive line this offseason and haven’t added any running backs (so far at least; both of those situations could change in the draft), while getting Will Fuller back and a full healthy year from Keke Coutee could reinforce the team’s receiving game. Maybe it won’t be this bad in Houston, but this is the new normal. 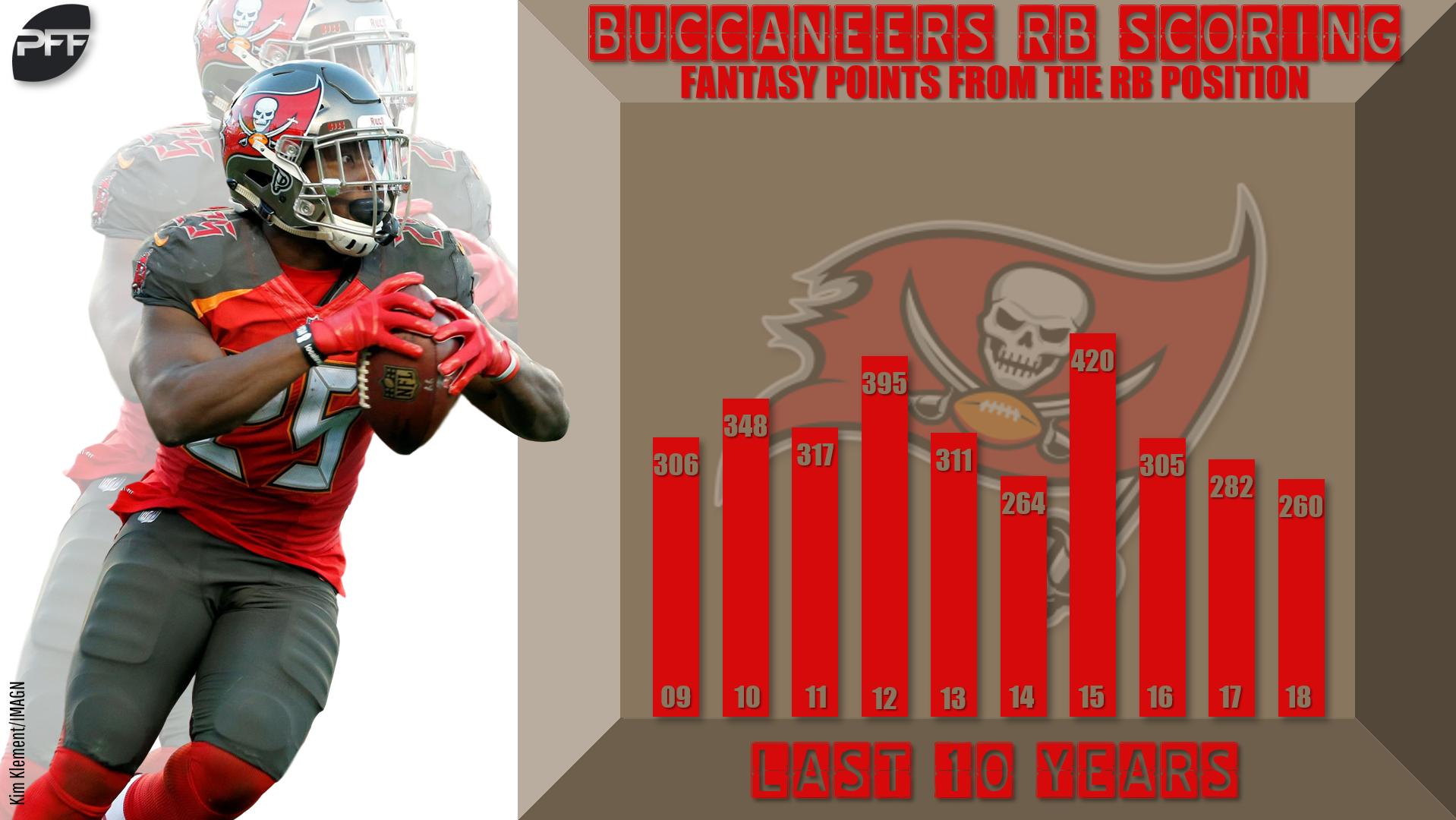 I’ve repeated this stat multiple times this offseason, but it continues to be fun for me to note that the Buccaneers led the league in wide receiver scoring in 2018 and ranked dead last in RB scoring. It was the most one-dimensional offense we’ve seen in some time. The Peyton Barber-led Buccaneers backfield managed the 11th-fewest PPR points by any unit since 2006. Barber was the only back who even topped 33 carries, and Ronald Jones as a big disappointment as a rookie.

Blip or new normal: There are some rumors that the Bucs could invest in a running back again in the draft, but tossing a high pick at the position in consecutive drafts is not a successful strategy. More likely is that the team runs it back with Barber and hopes Jones develops from a waste of a rookie campaign. But until we see something more, we’ll have to say new normal. 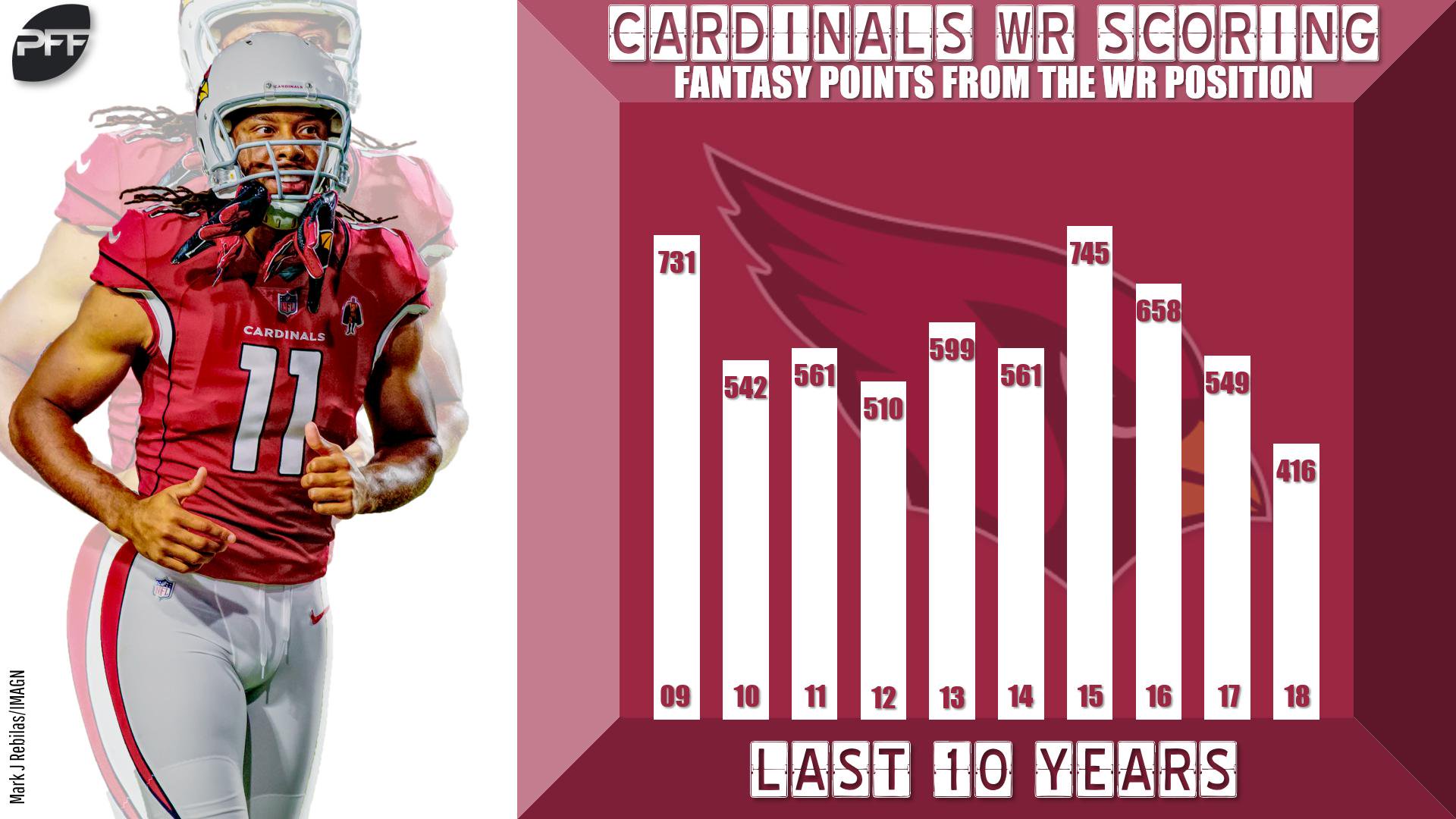 The Cardinals have had successful wide receivers over most of recent history, if only because Larry Fitzgerald has been doing his work since before our timeframe. But he’s had a running mate for most of that time — Anquan Boldin or Michael Floyd or John Brown or any one of a dozen other names. In 2018, Fitzgerald had a rookie in Christian Kirk who was fine, but that’s about it.

Blip or new normal: Fitzgerald has at least one year left. Kirk gets another year of seasoning, and the Cardinals should have a better offense overall (see above), but until we see another star receiver coming from this unit, this is the new normal. 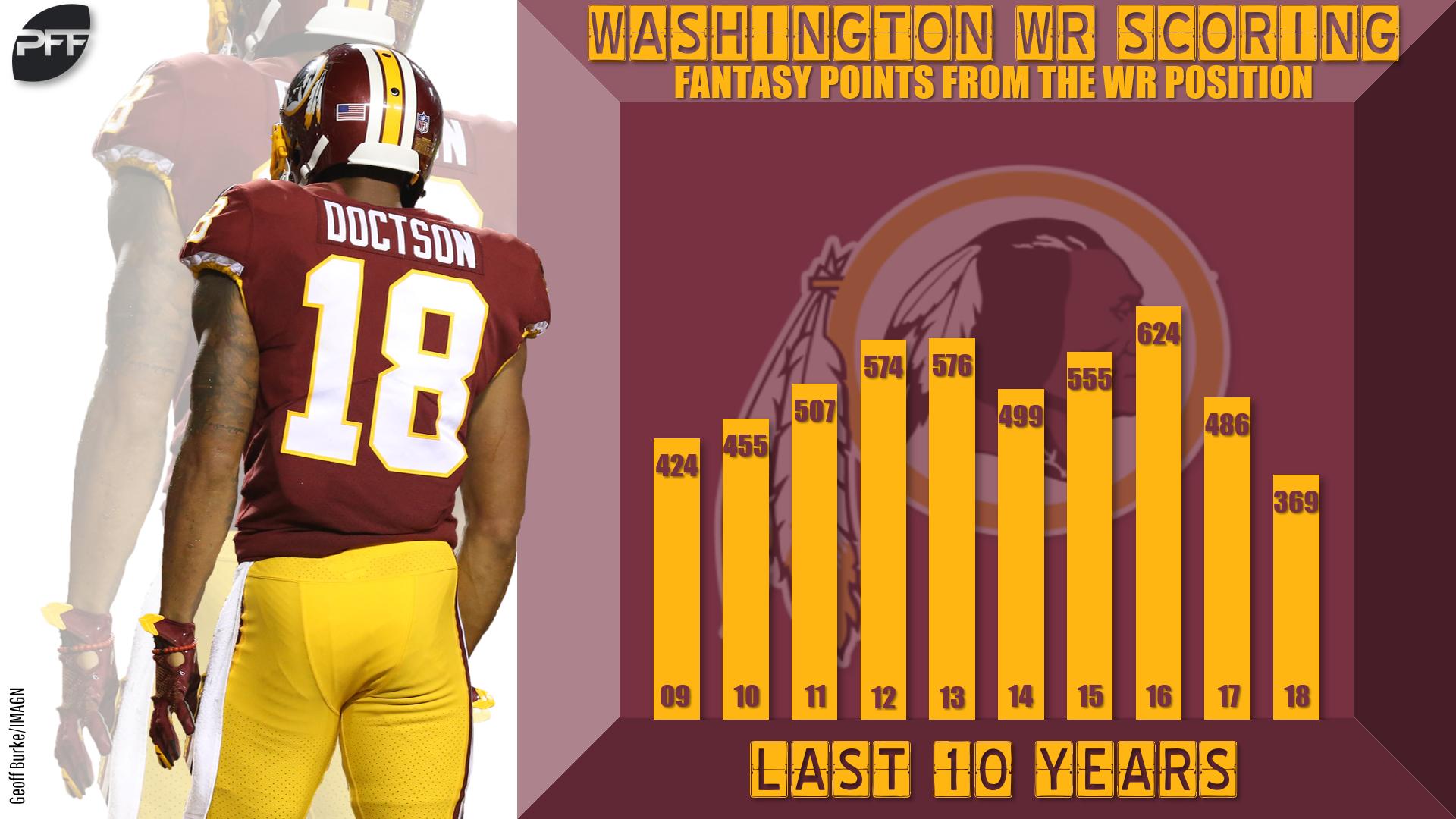 Things that went right for Washington in 2018: Adrian Peterson. I guess Josh Johnson, considering how little was expected of him, if you want to nitpick. Things that went wrong: Almost literally everything else. The Alex Smith acquisition was a tremendous disappointment, and that filtered down to the receivers. Josh Doctson led the team’s receivers in scoring at 109.2 points … 67th at the position.

Blip or new normal: Both? Washington hasn’t exacted reloaded this offseason and lost Jamison Crowder and Maurice Harris to free agency. But Case Keenum should at the worst be an improvement on the quarterbacks the team used after Smith’s injury, and might be an upgrade on the Smith we saw during the season. That alone should help the team improve over 2018 … if not by a lot. 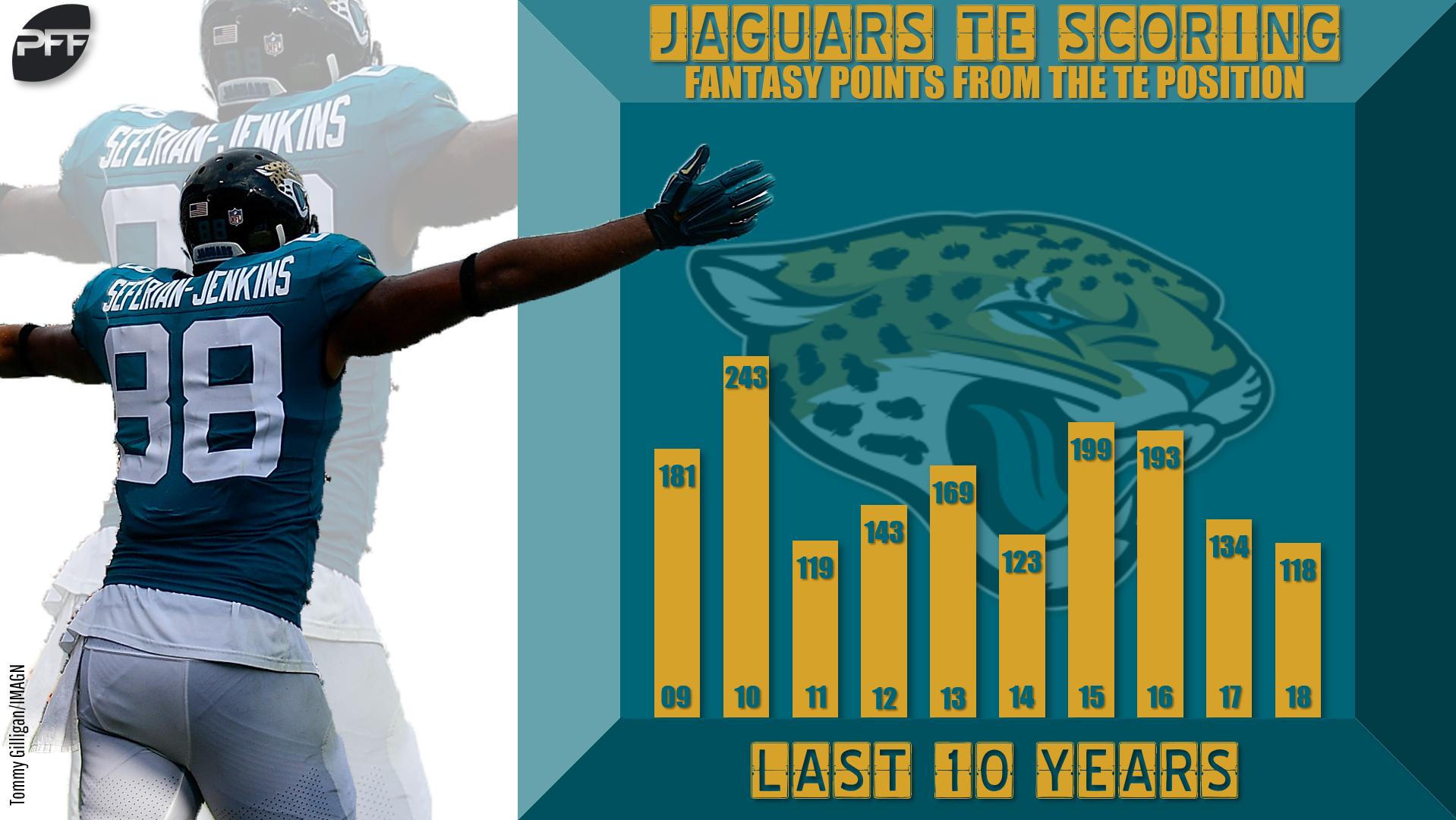 The Jaguars haven’t exactly been a tight end powerhouse in their history. Marcedes Lewis had a huge 2010, finishing as the TE4, but otherwise, the team hasn’t gotten 200 points from the position at any point in our timespan. Lewis was their lead tight end for most of that time, and he left last offseason. Replacement Austin Seferian-Jenkins was supposed to help, but he managed only five games and 90 yards before injury. Five tight ends caught at least one pass for the Jaguars, and James O’Shaughnessy is the only one still around.

Blip or new normal: Unless you’re a big believer in Geoff Swaim (who Jacksonville signed this offseason), there isn’t a lot of reason to believe in the Jaguars’ tight ends in 2019 (barring a big-name draftee). 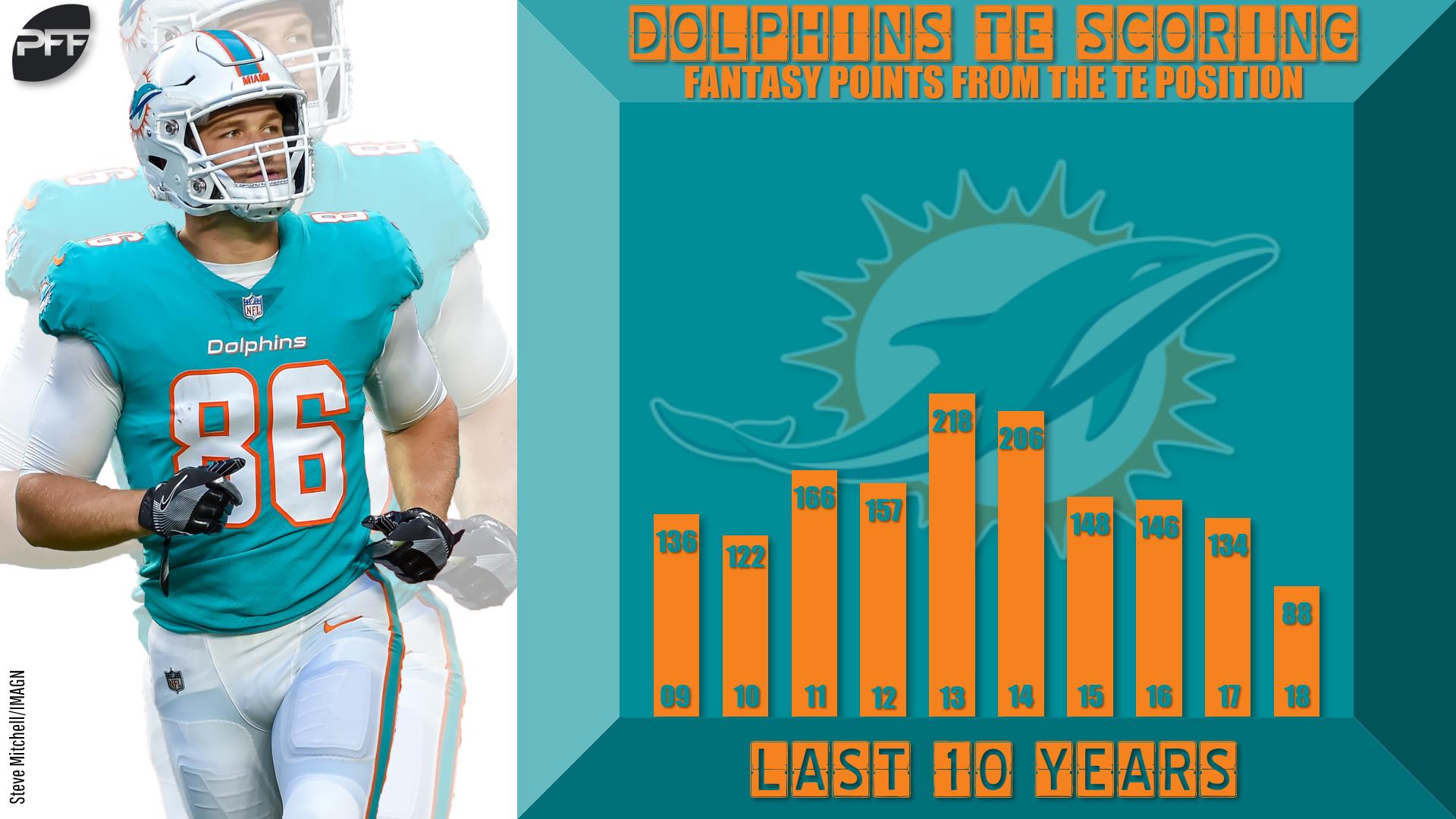 The Dolphins had a league-low point total from tight ends in 2018, the lowest total for any non-Jet steam since the Falcons and Texans in 2014. Mike Gesicki didn’t offer much as a rookie, and Nick O’Leary, A.J. Derby, and Durham Smythe didn’t do much either. Gesicki was the only one of the four who reached double-digit receptions or 100 yards. It was bad.

Blip or new normal: The Dolphins haven’t been exactly a tight end haven in recent years — Charles Clay and Jordan Cameron were the best producers for most of our time here. But Gesicki was a high draft pick for a reason. The Dolphins don’t have a lot to build on, but he’s got potential, and while Ryan Fitzpatrick isn’t a hot young quarterback, he’s good for some numbers from time to time. Last year was a blip. 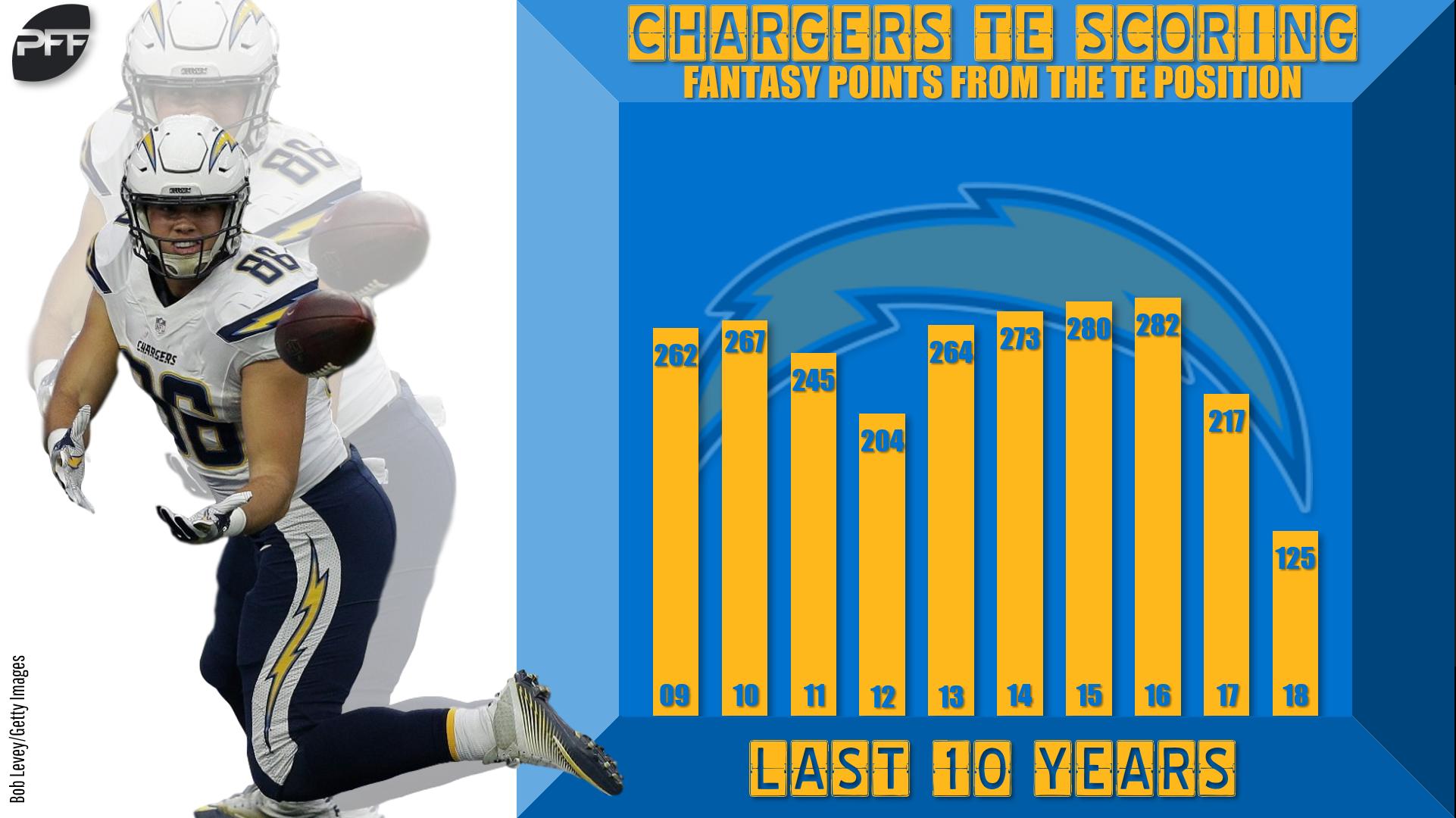 Last year was (almost certainly) the end of the Antonio Gates era for the Chargers, and it was a fairly inglorious one, as the longtime veteran totaled only 28 receptions and 333 yards. For a team that has been dominant at the tight end position for more than a decade, it was a huge drop.

Blip or new normal: Well, Hunter Henry is expected back and healthy in 2019 after losing 2018 to a torn ACL. So even with Gates expected gone to retirement, the Chargers should be fine. Blip.