Now that the NFL Draft is finally over, we’ve had the chance to assess the landing spots for rookies and gauge the success they’re likely to have. Everyone has their opinion on how the draft affects the value of the rookies chosen and the veterans currently on those teams, but the ultimate signal is that of the market. Luckily, we have thousands of best-ball draft selections to dig through from the offseason, and we can specifically compare players’ average draft position (ADP) before and after the NFL draft.

In this analysis, I’m going to look at the biggest veteran and rookie ADP movements for wide receivers from the period of one week before the draft to the week after. When we look closely at how the ADPs have progressed over the offseason, we can get a better idea of where they may head in the future — and whether certain players are fundamentally overvalued or undervalued.

All the data in the plots and tables below are from FFPC best ball drafts, which are 12-team, PPR format leagues. The data points represent the daily averages for the selection of players among a 330-pick draft.

Most of the focus of draft season is on the rookies and their landing spots. While that is supremely important, it’s equally important to gauge the effects of the picks on the veterans in the league. Experienced wide receivers can be hurt by the addition of a highly drafted rookie or helped by the lack of talent added in the early rounds. 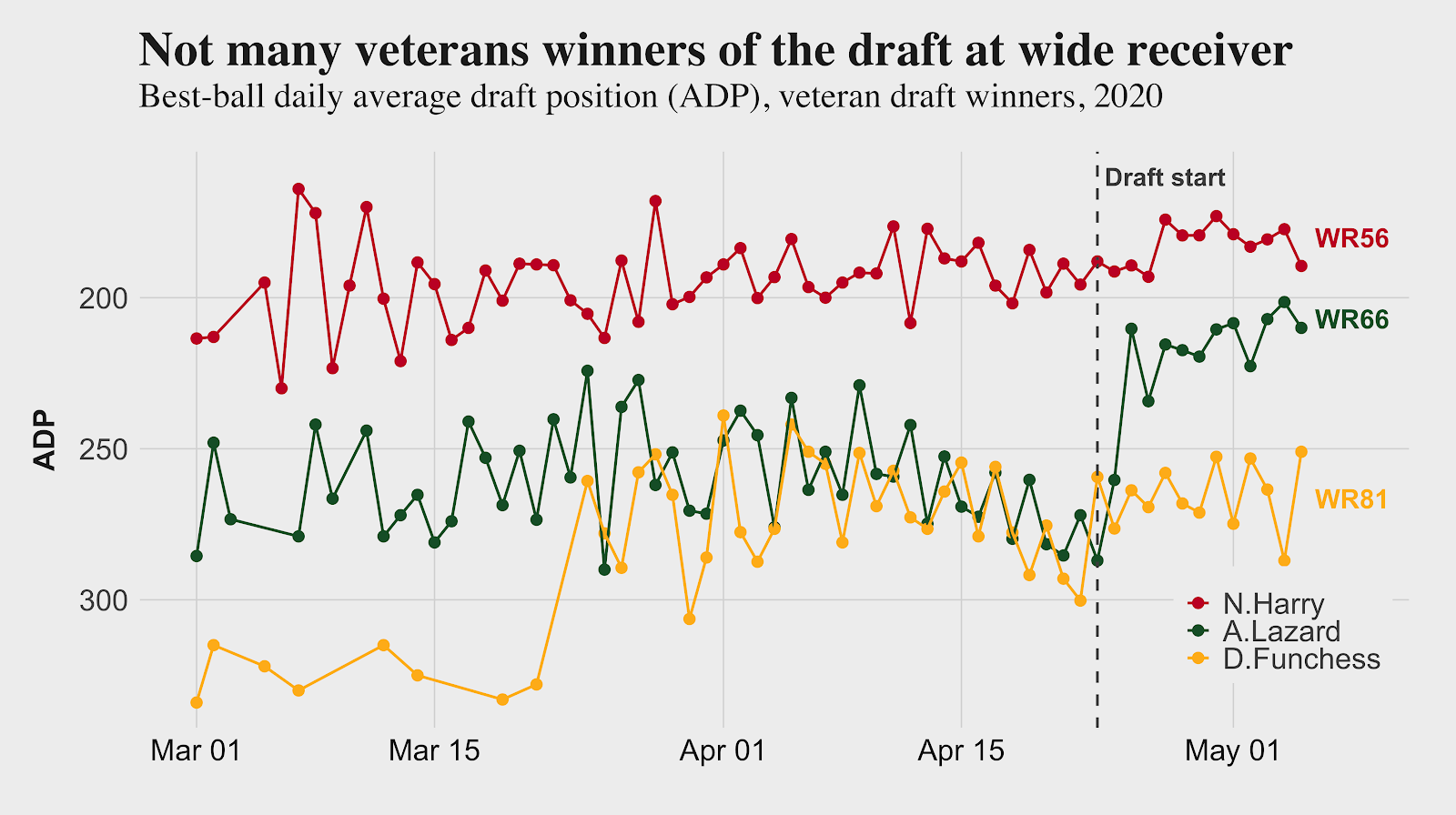 In a similar fashion to what we saw for running backs, it’s difficult for veteran wide receivers to benefit much from the draft. In fact, the extent to which ADPs moved up for veteran wide receivers is even more muted than for running backs. It’s another piece of data pointing to what we knew: Wide receiver is more a talent-based position, and running backs are more opportunity-based. The lower-rung Green Bay Packers receivers, Allen Lazard and Devin Funchess, avoided the addition of strong rookie wide receivers to the roster, which could have effectively killed their ADPs. It’s very likely that a Packers receiver other than Davante Adams will produce better than the WR66 and WR81 ADPs for Lazard and Funchess. Both receivers are likely values right now.

N’Keal Harry has largely been written off after a lackluster rookie season, especially for a first-round pick. Tom Brady’s departure to the Tampa Bay Buccaneers doesn’t help the situation, but Harry surely has upside in a receiving corps devoid of talent outside of the soon-to-be 34-year-old Julian Edelman. 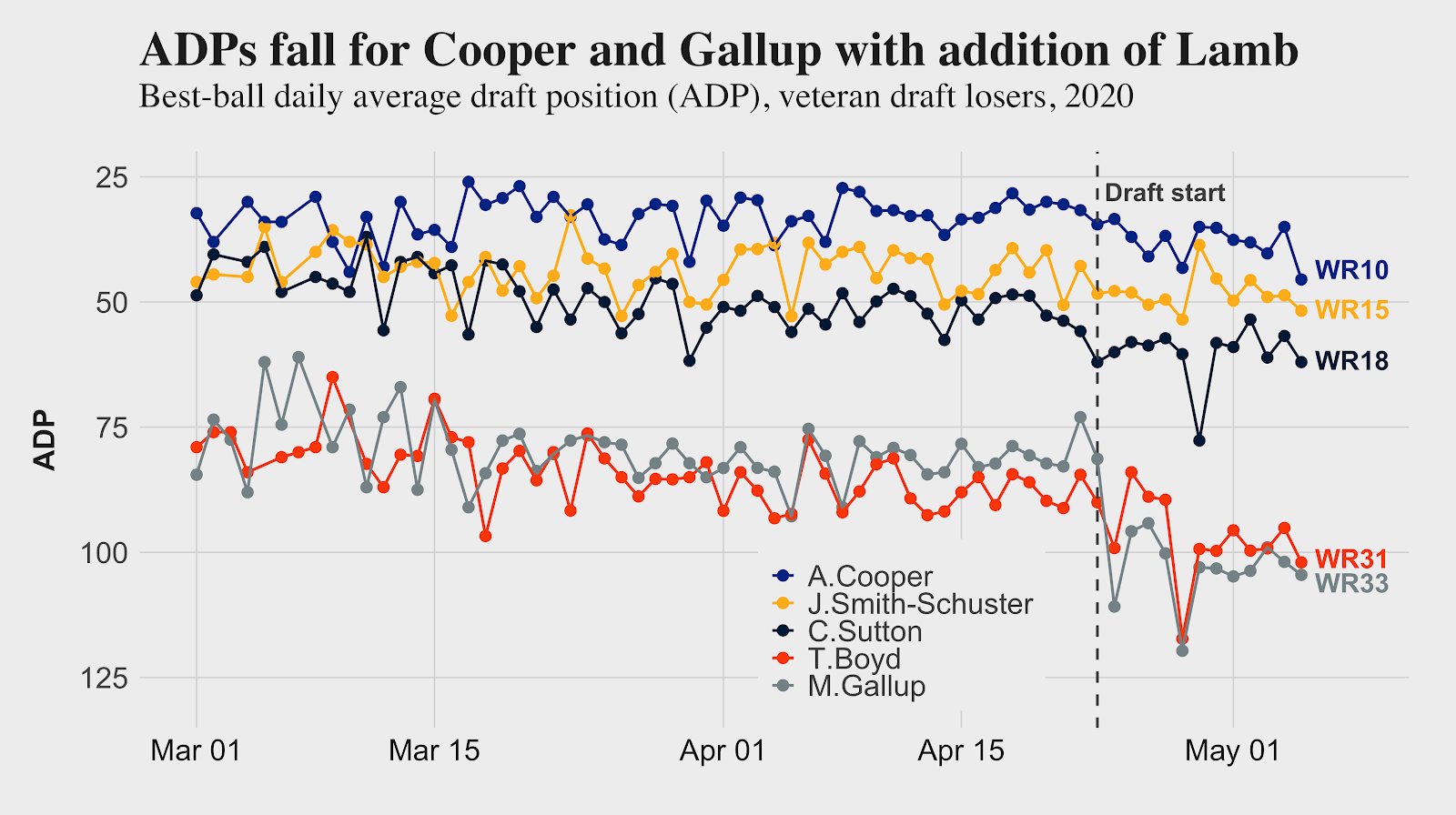 More receivers were hurt by the NFL than benefited, especially those of the Dallas Cowboys. There was little reason to believe that one of the big-three wide receiver prospects would fall to the Cowboys at pick No. 17, and now the addition of hyper-productive CeeDee Lamb put a damper on the ability of Amari Cooper and Michael Gallup to divide a fruitful passing game. The ADPs for JuJu Smith-Schuster and Courtland Sutton weakened some with the selections of Chase Claypool and Jerry Jeudy, though to a lesser extent than others. 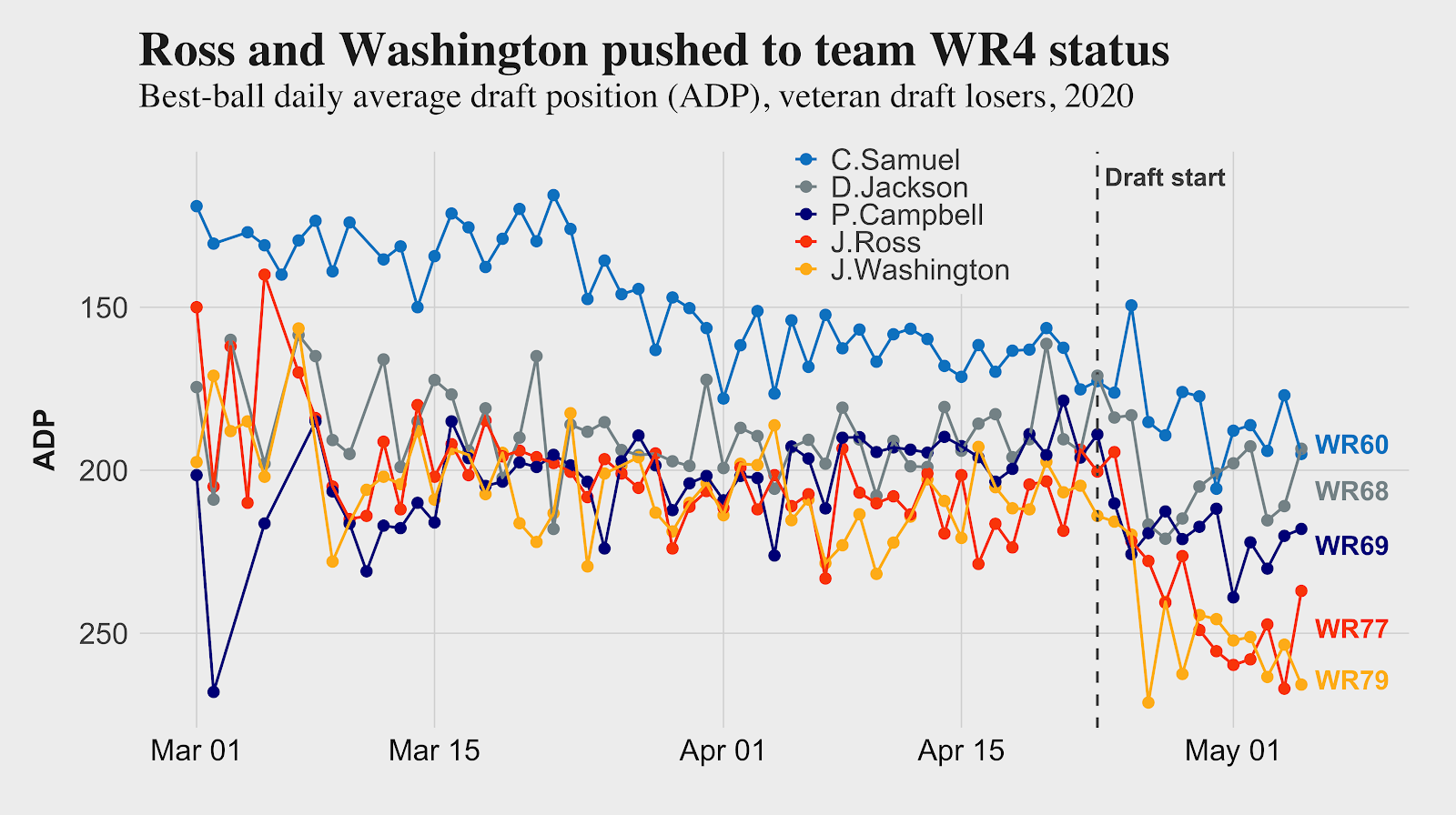 Looking further down ADP rankings, the draft severely hurts the chances for many receivers to grab a WR2 or WR3 role. The role for DeSean Jackson will overlap some with speedster Jalen Reagor, while Parris Campbell, John Ross and James Washington have more target uncertainty built into their ADPs. Curtis Samuel’s ADP wasn’t affected by the draft as much as a continuing stream of bad news, first the addition of Robby Anderson in free agency and then trade rumors. 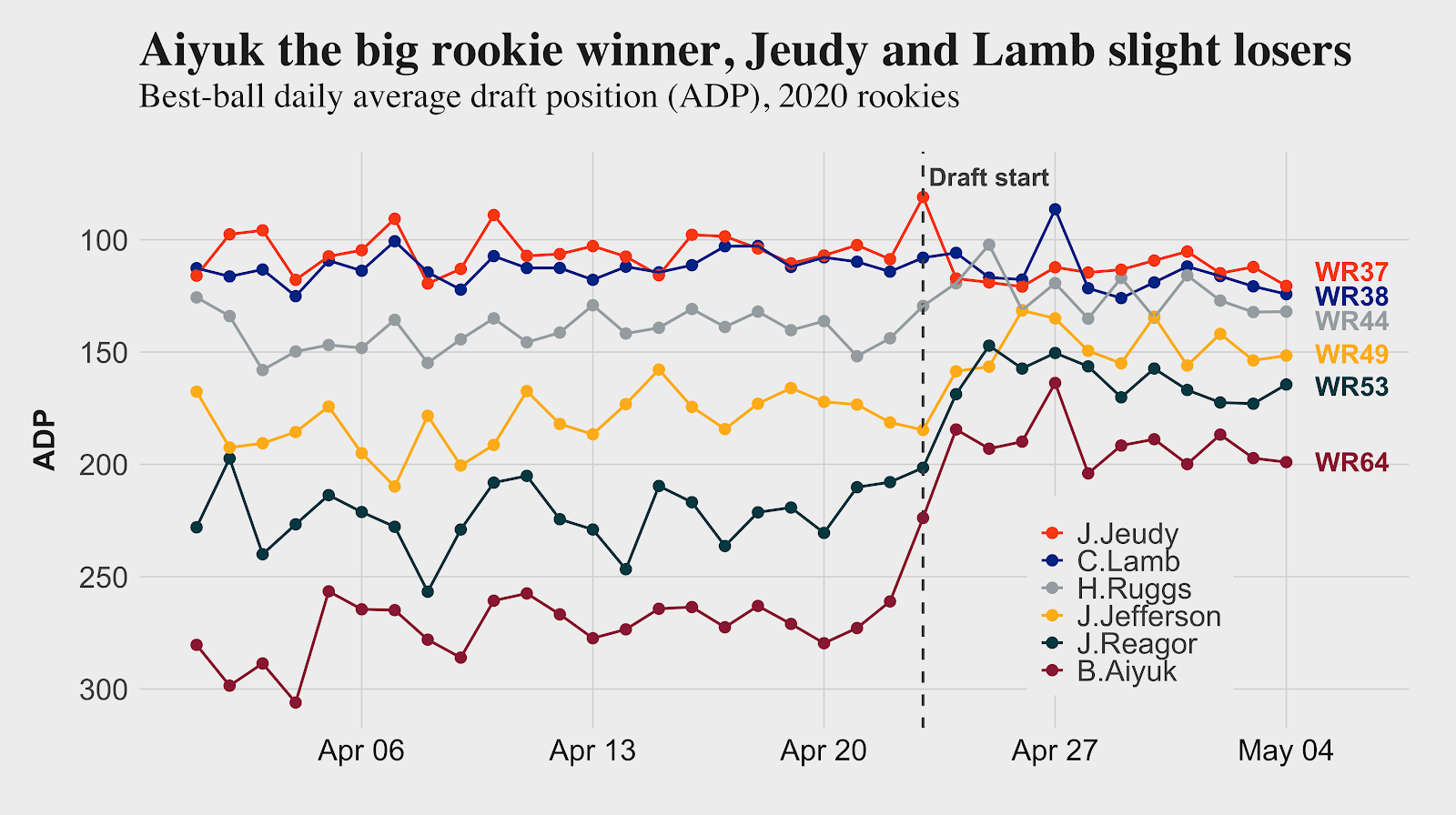 Jeudy and Lamb fell somewhat after the draft because of difficult paths to early WR1 status competing with Sutton and Cooper. Henry Ruggs has now joined them in a virtual three-way tie for top rookie ADP. Ruggs wasn’t drafted much earlier than expected, but his landing spot with the Las Vegas Raiders is wide open.

Justin Jefferson and Reagor were taken before or in-line with expectations, and both land in favorable destinations. Brandon Aiyuk was the biggest beneficiary after going much earlier than pre-draft mocks. 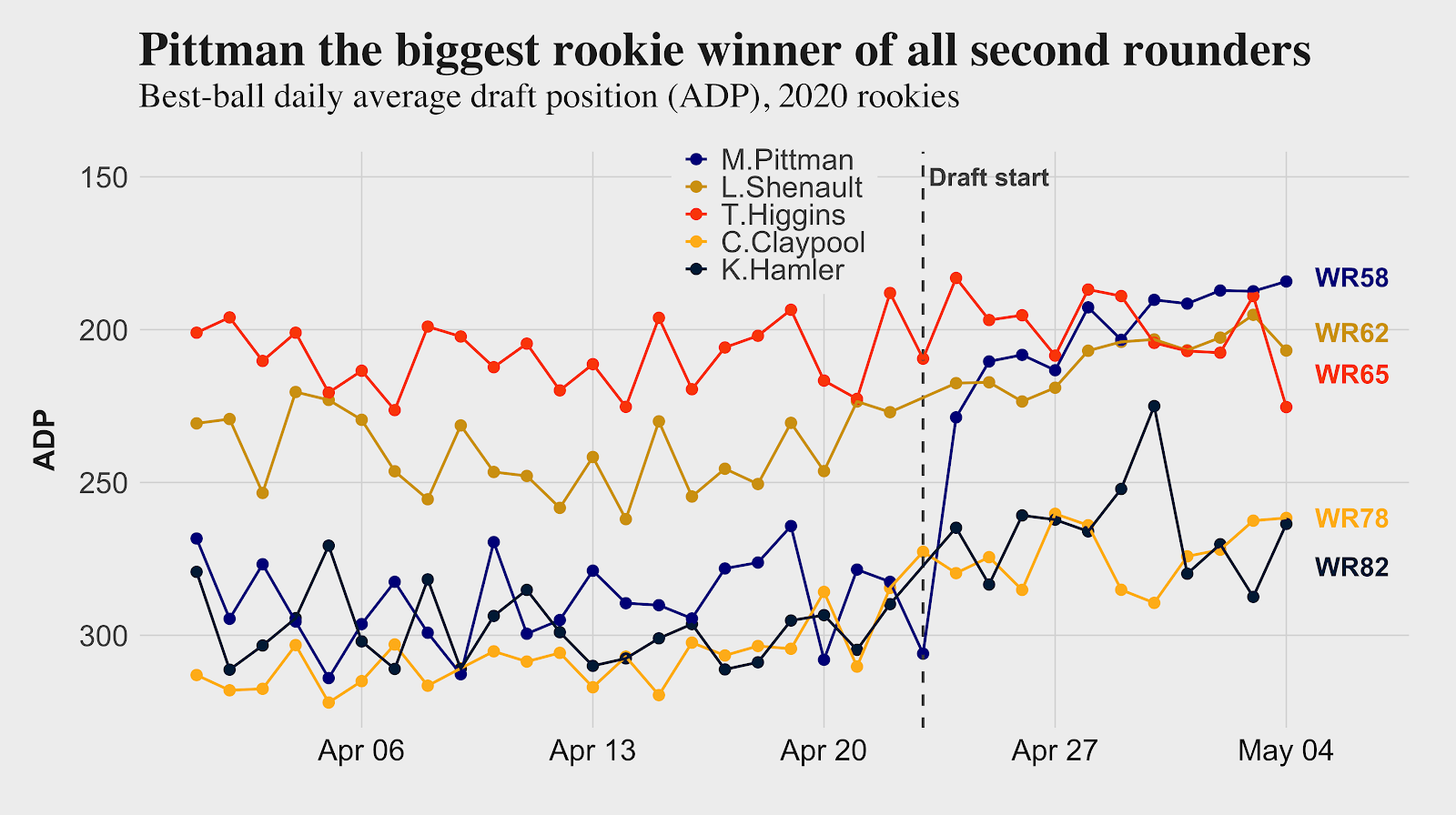 Fantasy drafters love the destination for Michael Pittman with the Indianapolis Colts. Tee Higgins’ value, at least in 2020, is muted somewhat by the likely presence of A.J. Green. Chase Claypool and K.J. Hamler were drafted earlier than expected, though fantasy drafters have been slower to bump them up substantially in the weeks following the NFL draft.